A strategy on hold

The uncertainty surrounding Lebanon’s first offshore licensing round is complicating the Lebanese Petroleum Administration’s (LPA) efforts to answer questions as to what potential subsea hydrocarbons the country has. While all of Lebanon’s offshore has been spanned by 2-dimensional seismic surveying and 70 percent has been covered by 3-dimensional seismic, the LPA wants to collect even more data to better identify potential resources.

The strategy, according to Wissam Chbat — head of geology and geophysics for the LPA — is twofold. More data would give international oil companies a better idea of where to drill once exploration and production sharing contracts are awarded — theoretically shortening the time between awarding contracts and exploration drilling and reducing exploration and investment risk — and additional information could strengthen the government’s negotiating position so the state gets a higher take when negotiating contracts.

One of the companies the LPA was in talks with to conduct extra surveying, however, has not been able to drum up interest among international oil companies to finance the project. The LPA had tapped EMGS, headquartered in Norway, to conduct electromagnetic surveying of Lebanon’s near coastal waters as well as other areas further out to sea. Electromagnetic surveying is superior to seismic in areas where a thick layer of salt, which covers much of Lebanon’s offshore, is either thin or nonexistent, Chbat says.

At an oil and gas conference in late May, Chbat announced that a contract with EMGS was imminent. Since then, however, the company has not been able to secure project funding from international oil companies prequalified to bid in Lebanon’s offshore licensing round. The close of the licensing round has most recently been delayed “from August 14, 2014, to a maximum period of six months from the date of the adoption of the two decrees related to block delineation, and the tender protocol and the model exploration and production agreement [EPA],” according to the LPA’s website.

“There’s no interest at the moment from the operators to pay for it,” Nicholls explains. According to Chbat, the government would pay nothing for the survey as funding it would be the responsibility of EMGS and the oil companies. In industry terms, this is called a multi-client survey, meaning many companies pay to conduct the survey, securing access to its results. Nicholls confirms the arrangement with Lebanon is on a multi-client basis, but notes multi-client funding arrangements vary and the state may or may not contribute. He refuses to disclose whether or not the Lebanese government would chip in.

“We’re in a kind of holding position at the moment,” Nicholls says. Asked if companies are losing interest in Lebanon, Nicholls refuses to speculate. “Oil companies are spectacularly good about hiding their strategies,” he says. “There has not been a negative response, but neither has there been a queue of people standing outside our door.”

The LPA’s Chbat says another company — which he did not name — is facing similar problems. This second company would do core sampling of the seabed to again give better data about the potential location of hydrocarbon resources. Among other things, core sampling can help give an indication of seabed temperatures. “We [currently] have no information on temperatures, and that’s important for oil and gas,” Chbat explains. “All these temperatures will help us, on paper, draw a gradient of temperature and we can estimate the temperature in the reservoir.”

Again, however, this project is on hold for a lack of interest in funding it among pre-qualified oil and gas companies. “The company conducting the coring, by its nature, they would like to secure the funds. Again, they say they have the same problem as EMGS, no interest now. They won’t invest themselves, won’t put their own money down,” Chbat says.

Chbat tells Executive that the LPA signed a contract with ION Geophysical, a US based surveying company, in 2013. The company — which specializes in ocean bottom seismic surveying — would be able to look even deeper into the seabed than the current data offers.

ION’s surveying “can be as deep as 25–30 kilometers under the seabed,” Chbat tells Executive. Existing seismic surveys do not give clear data below 10 kilometers, he explains. This extra information can help identify the basement of possible oil and/or gas deposits and give an idea of the thickness of sediments, “how thick are layers that could contain oil or gas,” Chbat says. 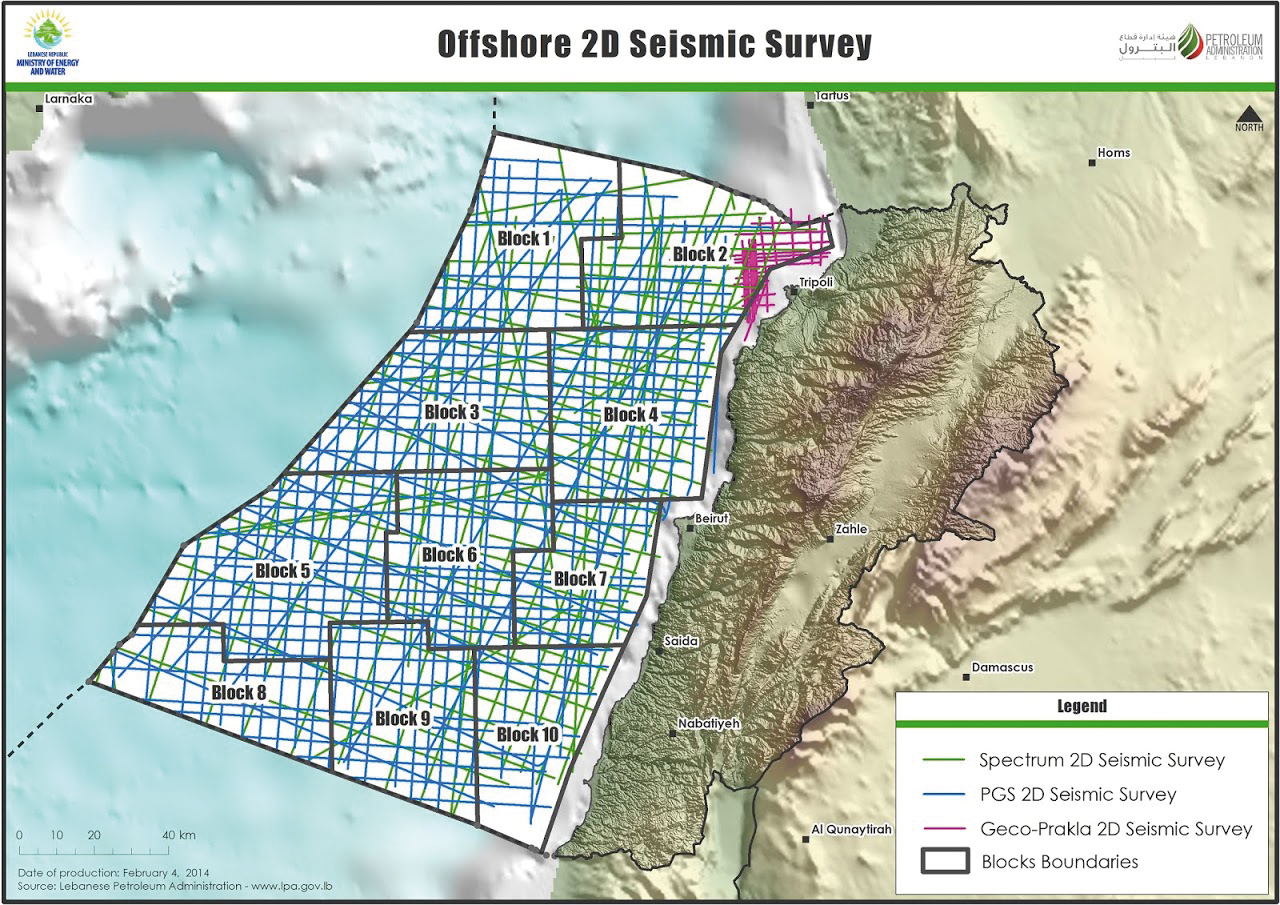 The company was supposed to send a surveying ship to Lebanese waters in late 2013, Chbat says, but cancelled because of the possibility, at that time, of a US strike on Syria — which never happened. “The insurance wouldn’t cover it. They stopped the ship from coming,” Chbat says. The next available ship, he says, will not be able to reach Lebanese waters “before the end of this year or early next year.” Chbat notes, however, that the LPA will likely renegotiate the scope of ION’s work when the company can send a ship. “We’ve conducted additional seismic since we signed the contract” and therefore do not want the same surveying as last year, he explains. ION did not respond to repeated calls and emails requesting comment.

Asked what he thinks this means for the future of Lebanon’s nascent oil and gas sector, Chbat is upbeat. “It’s not a time-bound thing,” he says of additional data collection. While the LPA wanted additional data prior to the close of the first licensing round to be in a stronger negotiating position when signing contracts, Chbat argues that all of Lebanon’s offshore blocks will likely not be offered at once, meaning that additional data could be useful in future licensing rounds if not acquired before the first one closes. Nor does he think repeated delays will push companies away from Lebanon for good.

“Interest from companies might change. Some new players may come, some old players may leave, [but] we will always find someone to develop our resources,” he says, noting, however, “the delay in the bid round will affect competitiveness, resulting in less favorable commercial conditions for the state and deminishing Lebanon’s regional presence and position in the regional gas market.”