Between vision and mirage

A lack of strategy in natural gas exploitation is causing frustration

An air of frustration hung over last month’s oil and gas conference at the École Supérieure des Affaires. “It is clear that there is no plan,” vented an industry leader who wished not to be named, referring to the government’s lack of a publicly articulated roadmap for the sector.

Political hurdles have slowed progress on the development of the sector, despite work by its regulator, the Lebanese Petroleum Administration (LPA), in drafting various recommendations and holding a prequalification round for international companies keen to drill in Lebanese waters. At this point delays in moving forward with offshore exploration are causing confusion and anger.

[pullquote]“due to the several political skirmishes and circumstances, we do not have an energy master plan yet”[/pullquote]

Lebanon has been working on oil and gas exploration since the early 1990s, but “due to the several political skirmishes and circumstances, we do not have an energy master plan yet,” said Roudi Baroudi, an energy expert based in Qatar. According to Baroudi, “Since late Prime Minister Rafik Hariri launched a strategy for a general Master Plan for Lebanon Gas Utilization, the objective of the study was to tackle the upstream, the midstream and the downstream sectors. Unfortunately this study never saw light.”

The government published a petroleum policy in September 2007 outlining the direction for the sector, but never took it seriously. As one local attorney familiar with the details of development in the sector stated, “It was certainly not put to debate, in terms of inviting scholars, economists or legal [experts] in the country to give their opinion … and it hasn’t seen the light yet as an overall strategy.”

In April 2012, then-Prime Minister Najib Mikati’s economic team addressed a draft policy note to the Council of Ministers regarding the direct positive impact that a well-oriented industrial strategy could have for the Lebanese economy, emphasizing on the energy sector and the potential of oil and gas activities and highlighting progress regarding the legal and regulatory framework.

As Baroudi explained, “The good news is that with the creation of the [LPA] things are getting better and I understand that most of the ministries and stakeholders are working on a very sustainable energy plan.” The LPA, appointed in December 2012, is the sector’s de jure regulator. However, the law limits its powers to a point that its primary role is as an advisor to the Ministry of Energy on the development of the sector.

Nearly two years after its six board members were appointed, the LPA has made progress in advancing the legal framework for the oil and gas sector by issuing the Petroleum Activities Regulations, studying the environmental impact of offshore exploration in its (as of yet unpublished) Strategic Environmental Assessment and launching the country’s first offshore licensing round. However, companies have not been able to bid on blocks yet because the Council of Ministers still needs to approve decrees delineating the offshore blocks and laying out a model exploration and production sharing agreement. The LPA has sent its recommendations for the two decrees to the Ministry of Energy and Water (MoEW), which forwarded it to the Council of Ministers, where they have languished since early 2013.

The reason for the conference-goers’ grumbling is simple: Prospective gas resources in Lebanese coastal waters have the potential to transform the local economy by reducing the heavy energy bill and moving the country not only toward self-sufficiency, but possibly also toward becoming a net gas exporter.

Economist Marwan Iskandar conjectured how some can ask whether Lebanon will be fully able to benefit from this new wealth and how oil and gas revenues would be spent. “We are in a country which has $64 billion in public debt and which needs to organize itself in the next seven years for it not to have a $100 billion of debt,” he said. “Let us begin to use gas for electricity generation which we can do within 18 months and we can save money.”

Nasser Hoteit, president of the LPA, stated that if Lebanon finds less than 5 trillion cubic feet (tcf) of natural gas in its territorial waters it would not export gas. “But if we have between 5 tcf and 10 tcf then we can export to the regional market. However, if we have 10 tcf [or more], we can think of exporting to foreign markets such as Europe and Asia,” he added.

And as Minister of Energy and Water Arthur Nazarian stated during the opening of the conference, “It is probable that we have natural gas in our waters. This is why we should develop the main infrastructure to produce gas.” The MoEW has put forward a plan to construct a coastal gas pipeline stretching from Tripoli to Tyre, which would serve as the backbone of gas infrastructure for the country, yet it is still awaiting funding approval by the Parliament.

Some at the conference even talked of developing a downstream industry utilizing gas to produce petrochemicals, such as fertilizers. However, the proposal faced some skeptics. As economic consultant Kamal Hamdan noted, “Lebanon’s economy lacks a solid industrial component, which could limit the possibility of developing links between the oil and gas industry and the local economy.” 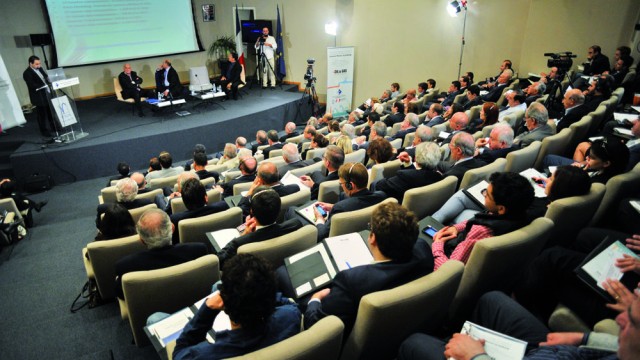 Vision, but no strategy

Lebanon’s workforce, conferees also noted, needs to be better prepared for the birth of this industry. The Exploration and Production Agreement, which is still awaiting approval from the Lebanese government, requires four-fifths of a company’s local labor force be Lebanese nationals. During his presentation, Peter Gougeon, director of the business school ESCP’s London campus, noted that the 80 percent target could prove difficult to achieve in the early phases of exploration and development due to the lack of a specialized labor force in Lebanon.

This may not be so difficult, however. According to Imad Makhzoumi, an executive vice president with Future Pipe Industries, service companies supporting the oil and gas sector will drive employment — particularly small and medium enterprises (SMEs) — creating low to medium level technical competency jobs. He called for the government to support and articulate an SME strategy to create and build a supportive future for companies that will be the real driving force of employment and servicing the international companies coming to establish operations.

While many Lebanese universities have established academic programs to address this issue, there has been little attention to vocational programs. This detail has not escaped the LPA, which has been in discussions with local institutions to establish programs for technicians.

The MoEW and the LPA have engaged experts to draft much of the legislation and decrees needed to develop the sector framework. The LPA has also coordinated with the Lebanese Center for Policy Studies on multiple roundtable discussions including environmental governance and a policy dialogue session consulting experts for their input and policy recommendations.

Throughout the forum, the government outlined its vision for the sector centered on three main areas: upstream exploration and infrastructure, education and employment preparation, and a downstream petrochemical industry. A comprehensive strategy for this sector, however, is still lacking. And such a strategy cannot be based on premature reserve estimates and valuation amounts often cited in the local media. No one will know for sure what lies beneath Lebanon’s waters until wells are drilled. As such, Mona Sukkarieh, a Beirut-based consultant with Middle East Strategic Perspectives, explained, “A proper ‘strategy’ is based on the results of drilling operations. Because Lebanon lacks exact data ahead of drilling, a ‘vision’ will be prepared. It is on the [LPA’s] agenda for 2014.”

But while technocrats from the Ministry of Finance and LPA were discussing the technical issues for developing the potential offshore resources with experts, the local political climate, dominated by the country’s presidential elections, continues to overshadow the need to push forward with Lebanon’s first licensing round. The LPA’s Hoteit claimed that if the two decrees were passed by Parliament in May, Lebanon would have rigs in its waters starting the end of 2015 or beginning of 2016.

A ministerial committee in Parliament is studying the two oil and gas decrees needed for the licensing round, now scheduled to close for bids August 14; further delays in passing the decrees would unfortunately result in another postponement.