This article is part of Executive’s special report on the oil and gas sector. Read more stories as they’re published here, or pick up October’s issue at newsstands in Lebanon.

Much has been said regarding the prospects for oil and natural gas in Lebanese waters. Extensive surveying — the entirety of the country’s offshore waters has been spanned by 2-dimensional seismic surveys while 70 percent has been covered by the 3-dimensional kind — has resulted in the identification of the zones most likely to contain recoverable hydrocarbons, drawing interest from 46 companies that prequalified to bid in Lebanon’s first offshore licensing round.

A Lebanese Petroleum Administration (LPA) map from 2012 shows where the greatest potential to find resources may exist. The results of seismic surveying have resulted in assessments which companies can use to drill exploratory wells and thus test projections of reserves in Lebanon’s exclusive economic zone.

The results of surveying suggest the different zones contain gas reservoirs at different depth: biogenic gas is formed at shallow depths and low temperatures by bacterial decomposition of organic matter, suggesting lower costs in drilling and extraction. Thermogenic gas, in contrast, is formed at greater depths through thermal cracking of decomposed organic matter or oil into gas — where molecular bonds are broken due to high heat and temperature — suggesting higher costs in drilling and extraction.

The seven zones are delineated according to geological similarities and characteristics of different petroleum systems (the geophysical qualities essential for oil or gas to accumulate). In referring to this map, exploration probability of success for the zones has not been projected, nor do the zones directly relate to the 10 proposed offshore blocks.

To better appraise how much gas or oil an area might produce, experts use what are called P50 calculations. These show a middle of the road estimate for the volume of gas or oil, and are the norm for projecting exploration success so as to manage expectations. For instance, a P50 of 10 trillion cubic feet (tcf) of gas means that, based on all available evidence, experts predict that the probability of finding at least 10 tcf to be 50 percent — that is, there’s an even chance there’ll be either more or less than 10 tcf. The more conservative P90 and optimistic P10 calculations can also be used to bracket expected outcomes.

In a September conference hosted by the Research and Strategic Studies Center of the Lebanese Armed Forces, the LPA outlined the P50 for offshore blocks one, four and nine. In block one, the P50 for natural gas is 14.9 tcf and +440 million barrels (mmbbl) of oil; in block four the P50 projection is 13 tcf and +425 mmbbl; while in block nine the P50 is 15.2 tcf.

These are merely projections based on seismic surveying and, until drilling in Lebanese waters occurs, 100 percent accurate figures on what lies below the waves cannot be confirmed. But to give some perspective, Iran — the world’s leader in proven gas discoveries — stands at 1,192.9 tcf at the end of 2013, according to the BP Statistical Review of World Energy June 2014. Lebanon might only find a fraction of this amount, not a global game changer, but certainly significant within the regional context.

Further data of the offshore area through electromagnetic surveying (useful for penetrating Lebanon’s thick layer of salt) and core sampling (useful to identify temperatures of the reservoirs) might result in more accurate assessments of where companies should drill exploratory wells, reducing time and saving money.

For now, these indicators are very encouraging. But no amounts for oil or gas can be confirmed until exploratory wells are drilled. Lebanon will have to wait before needed decrees are passed, allowing companies to come explore the country’s exclusive economic zone. 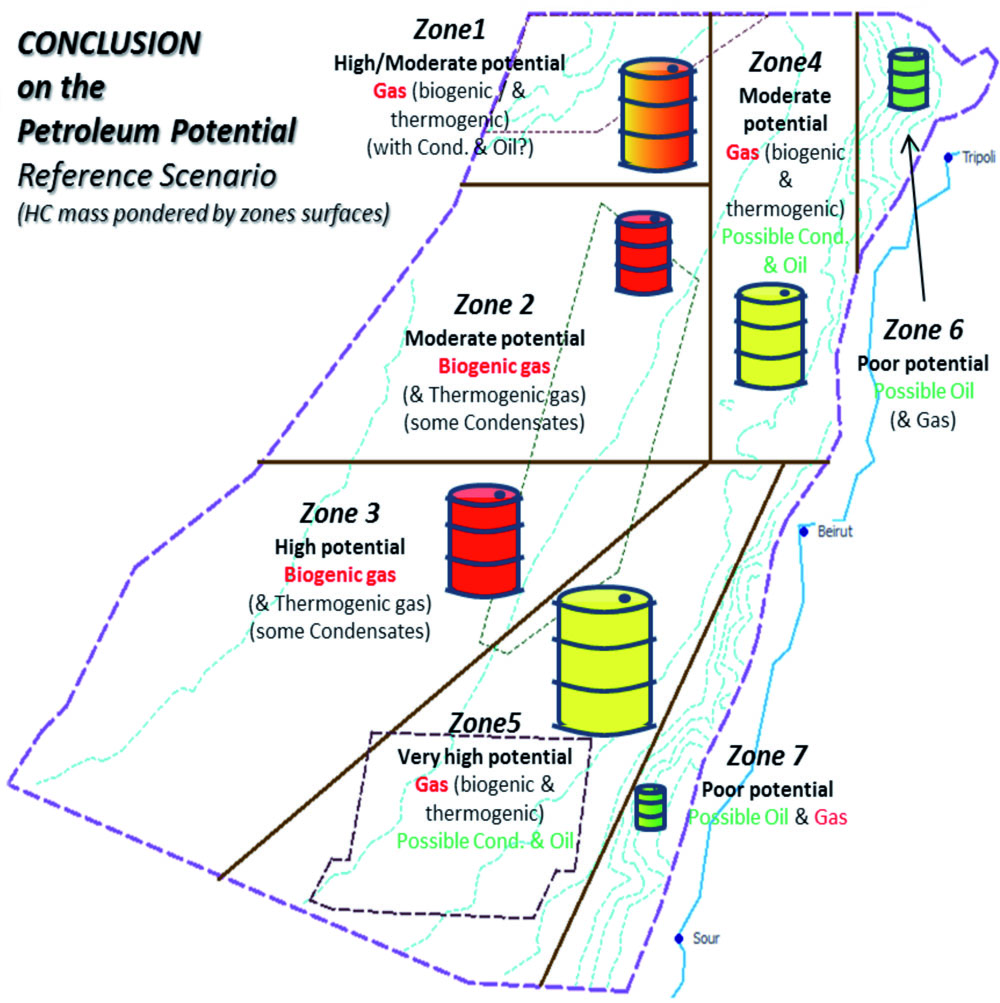