A president for Lebanon’s economy

Poll reveals the voice of the people

As Lebanon’s politicians continue to horse-trade behind closed doors over the country’s next president, it is worth considering the views of perhaps the most regularly forgotten set of people in the country — its citizens. 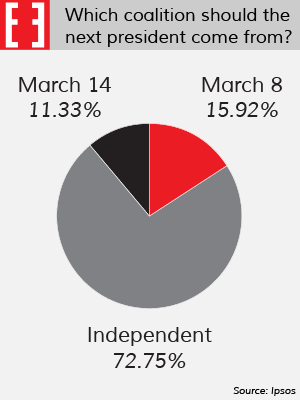 Executive, together with polling agency Ipsos, carried out a survey of 1501 citizens from across the country on whom they want to see in Baabda Palace by the end of this month. The aim was to get a deeper understanding of their dreams and expectations for the president of the republic, and in particular who they thought would be the best candidate to steer the country through tough times both economically and politically.

Perhaps unsurprisingly for a deeply polarized country, there was little consensus: Those polled mentioned the names of  more than 30 Maronite Christians — by convention the only sect allowed the presidency. Yet when asked, “Which Maronite figure would you personally have as next president of the Lebanese Republic?” the most common response was “I don’t know.”

A consensus point was the future president’s political affiliation. Nearly three-quarters of respondents want an independent president; just 16 percent and 11 percent said they would prefer a president from March 8 or March 14, respectively. 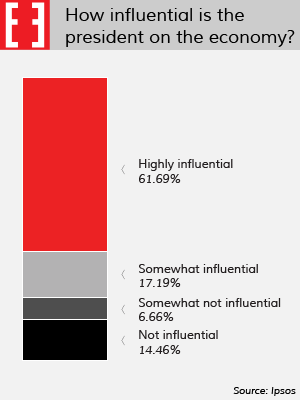 Beyond this, there were certain other themes that could be detected from the survey. First among these is that for the sake of Lebanese democracy there must be a new president by the May 25 deadline. Only 3 percent of those surveyed said they would prefer to extend the mandate of President Michel Sleiman if no deal was reached by that date. While 63 percent said the elections must go ahead in all circumstances, 34 percent said they would prefer a cross-party consensus on a candidate.

Most answered the question incorrectly: 72 percent of the 1,184 people asked answered either “directly” or “both.” Just 337 respondents gave the correct answer. 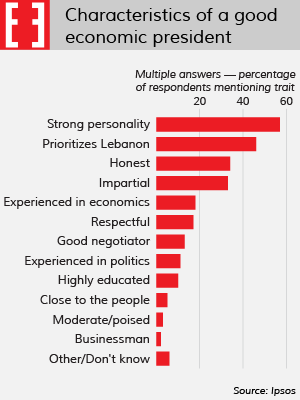 The survey went on to ask, “What characteristics should the future president have?” as an open-ended question. Four traits stood out: strong personality, prioritizes Lebanon, honest and impartial. Beyond these general characteristics, second tier criteria included: economic experience, being respectful, negotiation skills, political experience and a high level of education.

When discussing this issue further, there was an element of consensus that one candidate would be the best for the economy — Riad Salameh. The governor of the central bank was clearly the most popular candidate when asked: “Who would have a positive economic impact as president?” When questioned specifically about Salameh’s potential impact on the economy if he became president, 75 percent of respondents said he would have either a highly positive or somewhat positive effect. While former interior minister Ziyad Baroud received 73 percent, all others were far behind. Lebanese Forces leader Samir Geagea, Free Patriotic Movement leader Michel Aoun and Marada leader Suleiman Frangieh had positive ratings of 21 percent, 43 percent and 52 percent respectively. 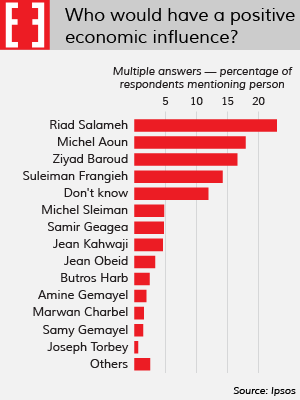 For a third group of names, the majority of respondents opined that this person would have “no influence on the economy.” These no-influence votes reached 62 percent for Jean Obeid, 75 percent for Joseph Torbey and 84 percent for Roger Dib. The latter two have not had much political visibility but have banking and consulting expertise; the prevalence of no-influence responses for their names could imply that they are not sufficiently familiar to the populace to elicit a clear opinion.

When asked more generally to list those who would positively influence the economy, 23 percent chose Salameh; a first place result that confirms the public’s regard for the governor’s economic credentials. Salameh was followed by Aoun, Baroud and Frangieh at 18 percent, 17 percent and 14 percent respectively. No one else was mentioned by more than 5 percent.

Delving deeper into the data, better informed respondents, despite recognizing that the president has no direct influence on the economy, have a stronger preference for Riad Salameh. 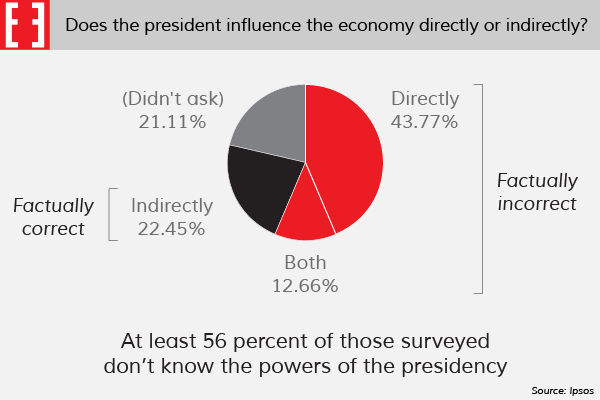 More than a quarter of respondents who were correct in responding that the president’s influence over the economy is ‘indirect’ expressed a preference for Salameh — however, his was also the most popular name among citizens who thought the president can have a direct impact, with more than one in five mentioning his name. Among these respondents, Aoun placed a close second, being mentioned 19.5 percent of the time. But for those with a better grasp of presidential powers, Aoun was mentioned far less frequently than Salameh — 16 percent of the time versus 25 percent.

If the survey’s results can be generalized to the Lebanese population, citizens know the president is crucial to the economy, even if many do not understand why. And regardless of this knowledge gap, the people consider Riad Salameh to be the economy’s best hope — the better informed are simply more certain of this.

In March 2014, Ipsos, the Paris-based global market research company conducted a random, anonymous phone survey of 1,501 Lebanese citizens in order to ask their opinion regarding Lebanon’s next president. The survey covered a statistically representative cross-section of the Lebanese population according to best current knowledge (absent a census) on demographic makeup in terms of gender, geographic distribution, age, religion, education and income. Persons under the age of 18, and those who work in the media, politics or related fields were excluded from the poll.

Beyond demographic data, Ipsos acquired answers to 16 questions and one sub-question, and analyzed responses under a scientific and anonymous format. The questions were structured into three areas:

1. General attitudes: Including the importance of reaching a decision under all circumstances or by consensus, and preferences on the president’s political affiliation and background.

2. Specific preference: Respondents named a president of their choice without any prompt or suggestion from the surveyor before moving on to ask if respondents see the president as having an influence on the economy.

The detailed analysis of responses by region, religion and age showed some variations between responses but confirmed that there are more similarities than differences in views among the main population groups.

The right choice for president

Looks like Interviewees got mixed up between managing deficits and finances with the actual role of economy, logically speaking, what influence riyad salameh got with local and international politics ? What he can offer in these areas ? Based on what he was ranked number one to economy ?