Home Economics & Policy The ghosts of seasons yet to come

The ghosts of seasons yet to come

Lebanon’s tourism sector hangs between glorified past and uncertain future

Bright lights in the city, at Zaitunay Bay

The first quarter of 2014 saw tourist arrivals contract by 16.5 percent year on year, to 229,000 visitors. The Ministry of Tourism is preparing a shoe-string campaign to reassure Gulf travelers from this month on that Lebanon is safe for them. Is this news? In a factual sense, yes, but with zero surprise factor.

The fact that tourist arrivals declined in the first quarter of 2014 when compared with the first quarter in 2013 is entirely in line with the trend of the past three years, given that in 12 of  the last 13 quarters visitor numbers declined. The only exception was the fourth quarter 2013, when visitor numbers edged up by about 6 percent when compared with the fourth quarter of 2012. If Lebanon’s inbound tourism were an economy in its own right (which it is not), the last three years would qualify as a deep recession. It thus comes as no shock whatsoever that Minister of Tourism Michel Pharaon says he saw “only bad news” when assessing the sector after assuming office in February (see interview with the minister of tourism). 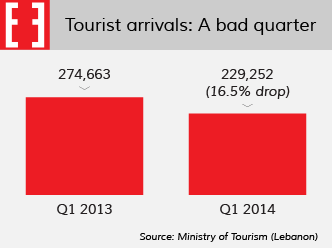 It is equally unsurprising that tourism officials are talking optimistically about the coming summer. Last year, then tourism minister Fadi Abboud enthused from the Arabian Travel Market fair in Dubai how the Gulf emirate was seeking to enhance the ‘‘brotherly ties’’ of the Lebanese and Emiratis. At about the same time, one of Lebanon’s best-known hoteliers, Mazen Salha, told Executive of his hopes for a strong summer 2013 with a return of the Gulf, and specifically Saudi, clientele.

Reality did not bear out those hopes and instead of growing, the numbers of Saudi and other Gulf Cooperation Council visitors slumped further until the end of March 2014. In 2010, GCC visitors accounted for about 15 percent of all tourists spending time and money in Lebanon. In the first quarter of 2014, the overall contraction in visitor numbers — by about 40 percent when compared with the peak year of 2010 — was exacerbated by the fact that the share of GCC visitors was down to 6 percent of that low first-quarter tally.

In the absence of exact data on the average spending by visitor group, the shift in the composition of visitor streams in the past three years reveals some implications for the market based on the GDP per capita of important countries of origin. In the first quarter of 2014, 26 percent of Lebanon’s inbound tourists came from Iraq, Egypt and Jordan, three countries where GDP per capita according to the World Bank is between 30 and 70 percent lower than in Lebanon.

The second main source of visitors was France, the United States and Canada, at combined 21 percent share of the total influx. What these three countries have in common is that their per capita GDPs are broadly four times above Lebanon’s, but they are also known as countries where many expatriate Lebanese have acquired citizenship.

Notably absent from the figures are Syrian visitors, who are not officially counted as tourists.

In an intuitive view of these numbers, Lebanese expatriates and not Western tourists are in all probability the most stable factor in the current tourism economy but Arab countries with less purchasing power than the Gulf visitors are the main drivers of new tourism demand.

[pullquote]Unfortunately, assumptions that Lebanon’s tourism can rebound sharply are not borne out by the numbers[/pullquote]

The shifts in visitor profiles and demand have implications for the way in which Lebanon’s tourism operators plan their future. Currently, many industry members concentrate on lobbying for leniency in their credit obligations or obtaining new subsidies. Others are paving roads to diversification by venturing into Gulf markets such as Dubai, where they, on a very small scale still, experiment with exporting Lebanese concepts — recognizing the winter hospitality season in the GCC is a good counterbalance to the summer business peak in Lebanon.

The trend of taking Lebanese concepts to where demand exists works for some operators as an answer to structural challenges of the domestic market. However, it also points out that the sector was less successful than stakeholders hoped when announcing at various points in the past decade that they were aiming to diversify from summer tourism into other seasons and niche activities such as urban getaway, events or ecotourism.

Disturbing as the drop in Gulf visitor numbers is, it would be less troubling if the absence of Saudi and Emirati tourists were the only problem for Lebanon’s tourism and a combination of improved security with removal of the political travel bans by Gulf countries would transform the current downturn in tourism from a prolonged U-shaped ‘recession’ to a V-shaped recovery with a strong and fast rebound to previous levels of performance.

Unfortunately, assumptions that Lebanon’s tourism can rebound sharply and quickly to full growth are not borne out by the numbers.  While the country had good years in 2004, 2009 and 2010 in terms of visitor arrivals, the bad and slow years were in the clear majority over the past decade. 2005 was a difficult year followed by a devastating 2006 when visitor numbers dropped back to 1 million. The years 2007 and 2008 were no bumper years and the 2011 – 2013 period, quarter by quarter, simply went from bad to worse.

Besides the caveat of Lebanon’s vulnerability to external shocks that are far more frequent than anyone can be ready for, the fairly extensive recovery periods after several crises in the past decade provide a warning on the viability of high-flying sector ambitions and associated foreign direct investments. Lebanon offers incentives to both domestic and international tourism investors through the Investment Development Authority for Lebanon (IDAL) and, for smaller projects, via the Kafalat loan guarantee program.

While projects implemented with public sector support have led to investments and job creation, the repeated periods of less-than-anticipated performance of tourism during the past decade are grounds for concern due to significant non-conversion rates of announced tourism investments into successful projects. According to IDAL, 4 out of 12 tourism projects that received the agency’s assistance between 2003 and 2011 were halted or, in one case (The Landmark Hotel) abandoned, noting that the project’s cancellation was because of important historic finds at the site.

However, unexpected halts of tourism projects have not been restricted to either antiquities discoveries or the political and security problems caused by the Syrian crisis. A European Commission-sponsored research publication on tourism investment opportunities in Lebanon named the “10 biggest FDI tourism announcements since 2013.” Of this list, only three projects have been delivered, and one more is delayed.

All these signs say that tourism, while a core contributor to the Lebanese economy alongside property development, banking and remittances, is not a sector where the country can count on linear growth.

Sector studies and strategy exercises previously focused on rather simplistic projections such as one in which the tourism ministry in 2004 assumed 20 percent annual growth for the following six years (de facto making a bet that the country would have 4 million visitors in 2010). As reflected in failed or aborted investments, such overestimations of the market’s growth potential can become very costly and throw doubts on any efforts to generate serious future investment commitments.

Luckily for Lebanon, the tourism downturns in the past ten years did not translate into negative impacts on the economy of the magnitude that the far-stretched concepts of indirect and induced contributions of tourism to GDP would suggest. The share of tourism in GDP as direct contribution is still in the range of 8 to 10 percent — roughly the same as in 2003.

World on the leisure run

Tourism is one of the world’s growth engines. Some previously struggling countries this year look set to accelerate their economies with the voluntary assistance of visitors. Spain’s industry, energy and tourism ministry just announced with glee that the Iberian country attracted 10.1 million visitors in the first quarter of 2014 and feted this 7.1 percent increase as contributing to the Spanish economy’s rebound.

Globally, the United Nations World Tourism Organization (UNWTO) projected in January that tourism, as measured by international tourist arrivals, would grow 4 to 4.5 percent in 2014 on the back of 5 percent growth in 2013. Some regions will see arrivals swell more than others, however. Asia Pacific and Africa, the top gainers in the past eight years, are estimated to grow up to 6 percent.

The Middle East region, which entails parts of North Africa along with the Levant and the Arabian Peninsula in the UNWTO statistics, is not sharing the positive outlook, however. According to the UNWTO, tourist arrivals to the region slumped at a 0.3 percent increase in 2013 and growth in 2014 at best may reach 5 percent — depending primarily on safety in countries such as Egypt.

In the long term, the UNWTO expects global tourism to grow at strong rates. Between 1995 and 2013, international tourist arrivals doubled from 529 million people to 1.08 billion. In 2030, the UNWTO’s trend extrapolation of growth rates sees 1.8 billion people temporarily exporting themselves into other countries on leisure or business visits.

Lebanon will see some of these visitor streams. Market dynamics in global tourism dictate constant search for new destinations and development of new tourism niches. To address the potential for recovery and growth of the tourism industry in 2014 and further down the road, the protagonists of the Lebanese hospitality industry would be well advised to draw unbiased conclusions from experiences such as the impact of the Syrian crisis, and at the same time invest more into the industry’s own research and planning capabilities.

Tourism is an economic, social and cultural activity that requires private sector minds to be open to change without clinging to old assumptions. It needs the state’s attention from licensing and supervision to sustainable planning. But the public and private sectors have hardly done their homework. The building where the Ministry of Tourism resides in the Hamra district of Beirut is an allegory for the overdue need to move forward. The ministry’s meandering hallways contain office after office overflowing with papers — a scene that looks like the setting of a 1960s movie. The building itself is 15 years overdue for renovation. Inside and out, Lebanon needs a bold new beginning in the tourism sector.

The right choice for president

The people, not warlords, should choose the president