It’s still the second-lowest rate in the region

Since at least 2011, the IMF has urged the Lebanese government to increase its VAT rate and to broaden the tax’s base by lowering exemptions. After this year’s increase of the VAT standard rate by 1 percent, from 10 to 11 percent, Lebanon’s VAT rate is still the second-lowest in the region after Djibouti, and there remains room for increasing it without hindering its efficiency, according to the IMF’s 2017 report on Lebanon. Lebanon’s VAT standard rate is even less than the average rate of 15.7 percent for its peers in upper-middle income developing countries, according to a 2011 IMF report.

Lebanon’s VAT increased by 1 percent on January 1; however, it is expected to contribute no more than an additional 0.7 percent to tax revenues (assuming all other factors remain constant). The impact of this raise is alleviated by the wide range of exempt goods and services, such as basic needs (meat, dairy products, medicines) and the supply of some activities of public interest (medical services and education). It is also possible to deduct the tax paid on purchases (input VAT) from that collected from customers (output VAT) on taxable activity; only the net balance is filed and paid to the treasury, which eliminates what is known as the cascading effect of the tax. In addition to preserving these exemptions, the 2017 law taxed no new items, goods, or services. 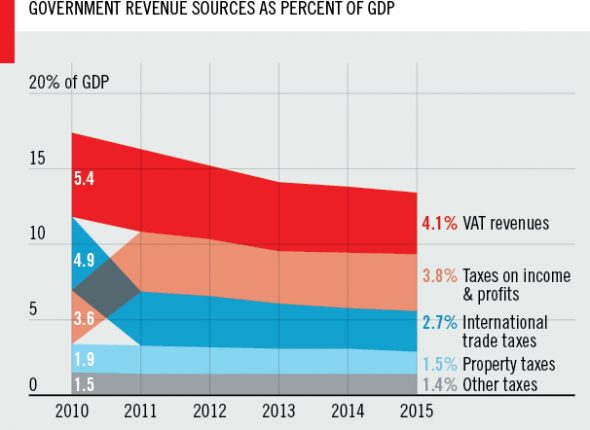 It is well known that taxes, while not popular, are needed. The introduction of VAT in 2002, the tax on bank interest in 2003, and then increasing  both in 2017, were not undertaken by choice, but were instead a bitter treatment for the increasing public debt and its service. A flashback in fiscal history shows that Lebanon’s economic situation has deteriorated since 2010, placing public finance in a worrying situation and requiring the government to optimize its tax revenues. This critical public finance situation now requires the Lebanese state to significantly increase tax revenues. Therefore, the government has not only focused on raising taxes, but also implemented comprehensive reforms of the tax administration. Focusing mainly on the modernization of the latter, these developments aim at keeping pace with global changes, such as setting up an organizational structure based on the function type (e.g. audit, data processing, taxpayers’ services, objection, and appeal) instead of the tax type income tax, inheritance tax, VAT, etc. This will result in strengthening the transparency and accountability of agents, as well as improving the relationship between the tax authority and taxpayers.

Raising taxes does not only aim at generating revenues; it also has a significant role in ensuring social justice. Lebanese taxation is based on the coexistence of two regimes—proportional and progressive—allowing both the tax administration and the taxpayer to cumulate their advantages. Since a VAT was first introduced in February 2002, this tax has become the most important source of tax revenue for the treasury due to its sheer tax base (see chart). With a single standard rate, VAT contributes some LL3 trillion (or $2 billion) per year, more than one-third of Lebanon’s annual tax revenues, or about 0.52 percent of GDP per one percent of VAT, according to the IMF. It is an indirect tax collected on behalf of the treasury by registered companies. This destination-based tax does not differentiate between imported and locally produced goods; it is levied on all taxable products and services delivered on Lebanese territory.

After more than a decade of VAT in Lebanon, indicators show that it is an effective form of taxation. The question remains: To what extent does this tax help mobilize the revenues of the state and rebuild the tax system? It would be desirable to have a tax that is evolving, profitable, difficult to defraud, and well recovered, with low exemptions and derogations. The increasing implementation of VAT in the world—more than 160 countries out of 190 have some form of VAT—indicates that this tax has proved to be a robust source of revenue, representing more than one-third of state tax revenues. Due to its sheer base, VAT is responsible for collecting a significant amount of tax revenues that ensure the sustainability of public finance.

In addition, the implementation of a single VAT rate, with a system of reverse charge of the tax by companies and a declarative system that relies increasingly on e-filing and e-payment, helps limit the cost of administering this tax and cuts the tax compliance cost. A multitude of tax rates makes the management and control of VAT more complex, which encourages tax evasion and fuels litigation. A single rate ensures the simplicity of the system, with less limitation to meet tax obligations.

Citizens notice any increase in tax rates, but overlook tax exemptions. Substantial VAT exemptions have been established in the Lebanese tax law since March 2012, such as the exemption applied to red and green diesel.

If we want a civilized society, we should start by ensuring a modern tax system based on effective and efficient taxes. We citizens are all responsible for paying our taxes. This is a cornerstone for a better quality of life and a prosperous Lebanon. Meeting spending needs and the sustainability of the public finance cannot be ensured by continuous government borrowing, but by mobilizing tax revenues based on a fair and modern tax system. The misery of every society is when the government stops adjusting its regulations and taxation system and refrains from raising taxes, the main source of the country’s revenues. This, however,  will not be the case in Lebanon.

Manal Abdel Samad Najd is the head of the VAT Legislation and Tax Policies Department at the Ministry of Finance.

“and there remains room for increasing it without hindering its efficiency, according to the IMF’s 2017 report on Lebanon.” Really IMF?