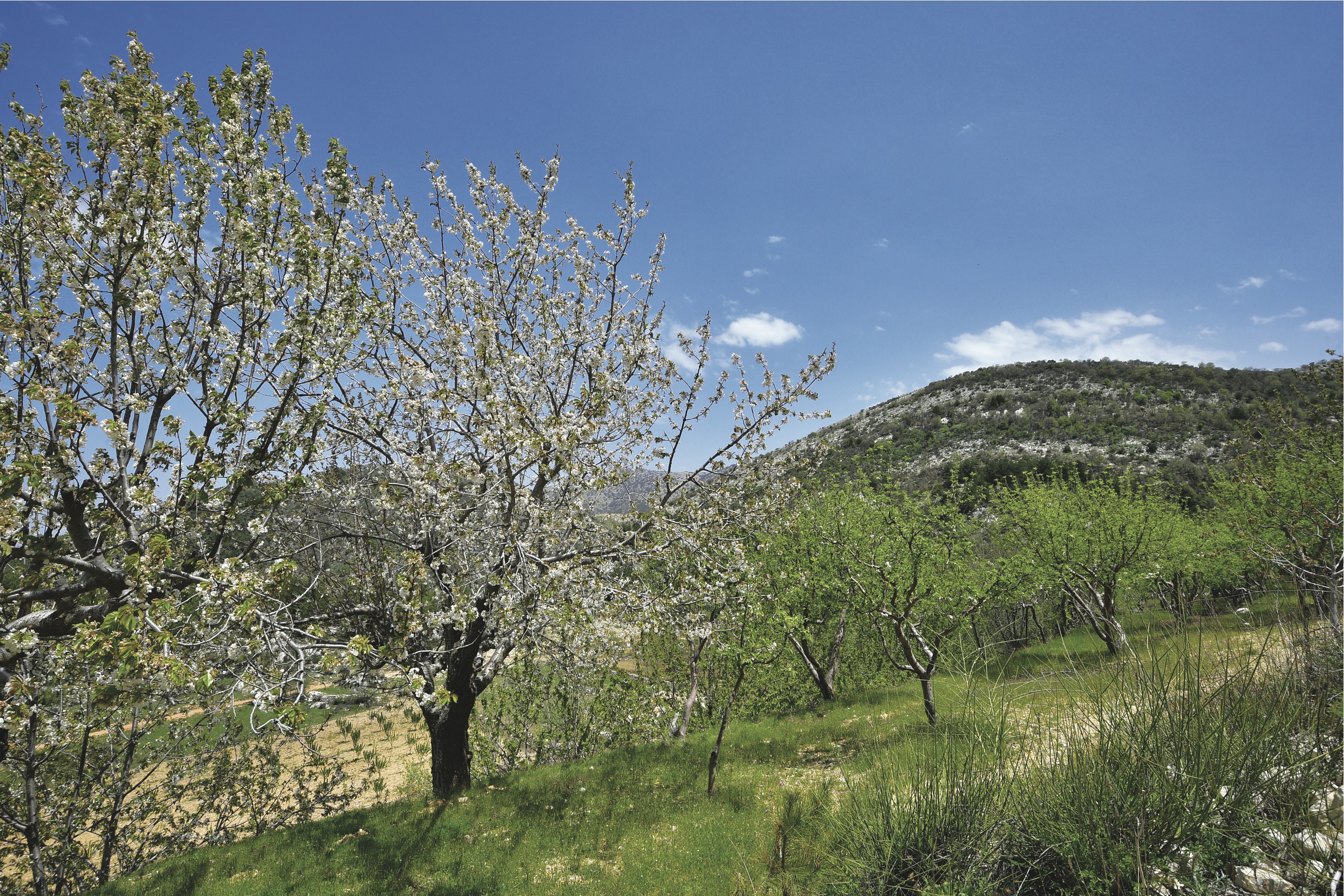 For what it is worth, the current outlook for Lebanon’s crop of traditional cereals, such as wheat, barley and maize, is not plastered with red flags. The Food and Agriculture Organization (FAO) says in its latest country briefing that weather conditions this winter were favorable and that estimates for the 2018 total cereal harvest were at the same level as for 2017, at 164,000 tonnes. The organization noted that in the domestic context, while “limited by landscape, production of fruits and vegetables is important in terms of GDP contribution and employment.” This is of course, without taking into account alleged or potential impacts from a mid-April cold spell on crops at Lebanon’s higher elevations.

The agricultural economy in Lebanon is plagued by the same recent past as every sector: it languished through a quarter century that was lost in communal squabbles and exploited by self-absorbed rentier “elites.” The sector also suffers from the same data drought that impedes all pillars of the national economy. Furthermore, for many years agriculture has been infested—as the 2019 Lebanon Economic Vision (LEV) aka McKinsey report correctly alludes to—by low productivity, structural constraints, competitive insufficiencies, economic challenges, and a government support that is either pitifully weak, “poorly targeted” (LEV wording), or both.

Despite this poor state—and the fact that agriculture and agro-industry account for only around 3 percent of Lebanon’s GDP—agriculture is one of the sectors that received considerable attention in the LEV. This is also despite the fact that agriculture achieved annual growth in the impalpable range of 1 percent annually in the two periods from 2005 to 2010 and from 2011 to 2016. In the former period, agricultural growth, according to numbers cited by McKinsey, was just about the lowest of all economic sectors. The only thing that appears to speak in the sector’s favor is that its low growth was stable, whereas some other sectors in recent years had flipped into negative growth.

The attention bestowed on agriculture is explicit especially in the fifth LEV chapter that portends to undertake “deep dives” into the entrails of the McKinsey economic vision and elaborates on its purported “engines of economic growth.” This meaty chapter comprises 25.5 percent of the LEV—325 out of 1274 slides—and is subdivided into focal sections on agriculture, industry, tourism, knowledge economy, financial services, and diaspora.

This places agriculture and industry, identified earlier in the LEV as productive sectors and thus constituents of the real economy, as part of a discussion alongside sectors that are, by definition, not. Neither the broad but conceptually vaporous knowledge economy, nor financial services, are considered part of the real economy. Meanwhile the diaspora is not only outside of the real economy, but also neither a direct producer of goods or services in the national context.

In addressing this eclectic potpourri of economic force fields, McKinsey dedicates 50 slides of the chapter in total to agriculture. That is a lesser amount of attention when compared with about 100 slides given to the knowledge economy and 60 slides to tourism, but almost the same as for financial services, and more than for industry and diaspora.

Confronted with so much emphasis on agriculture as a pillar of Lebanon’s future, the reader of the LEV might wish for a more concise explanation as to why the sector is important for Lebanon—the one-page FAO country brief actually presents a plausible perspective on this in claiming that the sector, although employing only 8 percent of Lebanon’s total labor force, “is a primary source of income and employment in rural areas where it reaches up to 25 percent of the labor force and 80 percent of the local GDP.” Although the LEV estimate on the importance of the agricultural sector in terms of labor force is, at 11 percent, even considerably higher than the 8 percent estimate cited by the FAO, it lacks a decentralized regional perspective on the varied domestic roles of agricultural production in Lebanon. Critics of this narrow economic angle appear to promote a different, more equitable, and more socially inclusive approach to the sector.

Under the currently sizzling context of transitioning into a more digital economy, it is also curious that the McKinsey team only discusses links between private tech entrepreneurship and internet-of-things initiatives for agriculture in an oddly placed “appendix,” rather than as part of the fifth chapter’s agriculture focus.

But most painful to some observers is the dichotomy between the LEV’s consultancy exercise of drafting an economic vision for agriculture, and the realities of the past 25 years with the hard lessons that these experiences have conveyed about the challenges that need to be mastered for giving the agro sector a fighting chance at implementing economic productivity and export achievements. “We need to look at the Lebanese specificities [as the McKinsey plan attempts to do], but if we are to access European markets, we need to abide by their specifications and requirements,” says Atef Idriss, head of food safety organization Mefosa, which consults on and advocates for food safety in the countries of the Greater Arab Free Trade Agreement (GAFTA) across the Middle East and North Africa. “We have to understand in Lebanon that if we do not go into details of compliance, we will not reach European markets even if we chase the McKinsey vision.”

At the end of March 2019, Idriss and food scientist Maged Eid, the consultation manager at Mefosa, attended an international conference in Leiden, The Netherlands. At the event, which was held by non-profit Global Harmonization Initiative and studded with food safety advocates and academics from around the world, Eid and Idriss shared a message about Lebanese agriculture that was based on analysis of every single item in a roster of 30 agro products that had, in the past 10 years, failed to conquer one or other threshold in Europe, and the specific reasons for the items’ rejection. “The biggest problem is that in Lebanon many initiatives [for improvement of agriculture and compliance with import standards in European markets] were not implemented on the ground,” Eid tells Executive. “The important issue is to start reforms from the bottom up, from the farms all the way up to the Ministry [of Agriculture]. The problem in Lebanon is that things are done top-down. Foreign initiatives are driving the action at the ministry, and they don’t know the issues on the ground in Lebanon. They provide interesting ideas that cannot be implemented in the field.”

Idriss has been active in the Lebanese agricultural sector as an agro-industrialist since before 2000. He was the founding president of the Lebanese Syndicate of Food Industries before spinning off a scientific food safety unit established during his leadership of the syndicate into the private Mefosa enterprise, when new officials at the syndicate did not want to continue running it. He describes the past two to three decades as a period marred by disparate European and Lebanese approaches to food testing, mismatched testing practices, narrow and parochial interests of bureaucrats, insufficient communication among public stakeholders, failures to reach primary producers on their farms, misguided funding, and assistance on agricultural development through various three-letter programs that failed to reach their aims.

Beginning with a narrative of not being able to fulfill a contract for supplying pitted cherries to a European yoghurt manufacturer due to prohibitive costs and an inability to obtain bank financing for an advanced de-stoning machinery—needed to meet the European partner’s standards for maximum pit fragment counts per kilogram of frozen cherries—Idriss perceives the years since negotiation of the Euro-Med agreements by late Prime Minister Rafik Hariri at the turn of the century as a lost agricultural export opportunity to the cumulative tune of billions of dollars. Just for early potatoes from the Akkar region, where an annual production of 24,000 tons was to be admitted to the EU under the agreement, he says Lebanon missed out on $144 million in export revenue. “If we had exported potatoes from Akkar to Europe over the past 20 years, we could have provided 24,000 tons annually [according to the Euro-Med ceiling]. At an average price per ton of $300, 24,000 tons times 20 [years] times $300—that alone would have given you $144 million,” he says. “That is a lot of money. If you add up all the 30 items that were listed in the trade agreement between Lebanon and the EU, and analyze why we never benefited from these opportunities in the last 20 years, [export revenue] could have reached in a rough estimate about $800 million per year, if every potential was fully used.”

Idriss argues that it is necessary to address and solve very real and specific barriers to Lebanese exports of food before even thinking of embarking on large initiatives, such as investment-intensive and complex efforts toward upgrading the human capital in the sector, or expanding capital expenditure in the agro-industry and agricultural sectors. According to him, the 15 initiatives that the LEV lists as ideas for the improvement of agricultural productivity comprise many steps that will be important for the sector to take, but they do not deal with the core reasons and specific insufficiencies as to why Lebanon saw exports rejected once they arrived in Europe. “We need to address the specifics that are hindering our exports, and that we should work on modernizing our labs, our supply chain, [and] our packaging materials so that we are addressing these issues. Then we stand a chance to export,” he emphasizes.

Without first addressing the need to activate such opportunities in the area of food exports and solve the underlying problems, Idriss frowns at the idea that shifting into crops such as avocados and cannabis would solve the problems of Lebanon’s agriculture. He is also incredulous that, in another strategy proposed by the McKinsey plan, it would make sense to pivot into distant countries as targets for food exports. “The challenge is not about opening new markets in faraway countries [as long as] our products are not complying with consumer needs,” he says. “How can a consumer be satisfied if my own wife is afraid to buy a [local] apple when she finds that it is brown on the inside? … If an apple is refrigerated badly, infested with insects, or contaminated with chemicals, even the Lebanese consumer will not buy it.” According to Idriss, Lebanon cannot currently export apples except to Syria, as even Egyptians and Libyans will not accept Lebanese apples. “We have excellent apples in Lebanon, but if we do not grow them properly, controlling for nitrates and nitrites in them, they will not [be allowed to] enter the markets,” he says.  “And if we do not meet requirements for delivering apples, will we be able to deliver cannabis? I don’t think so, and I don’t think that even Kazakhstan will touch our avocados or our [medical] cannabis if it is not up to international standards.”