The unwarranted embrace of decentralization

Ulterior motives threaten the viability of a federal Yemen

Ever since the beginning of the Arab Spring in 2011, pundits and so-called experts have been making declarations about “what’s wrong” with the region and “what’s next” in terms of solutions. While most of these theories are spoken and soon forgotten, one in particular has gained momentum: the idea of reforming public administration through decentralization. The motives behind this seasonal migration toward decentralization that are most often touted relate to economic development. However, more importantly, decentralization is usually presented in the context of protecting ethnic, religious and cultural minorities — a claim easier made than actually proved. It is worth remembering that similar justifications (e.g. protecting minorities) were the same cards many dictatorial regimes played around the region for decades. Syria is just one example.

The increasing role and influence of powerful international organizations has also played a major role in this embrace of federalism. In Yemen, where the UN is taking a lead in the transition, scores of expats bearing the title of “experts” have descended upon the country to advise the fledging government. Many such experts know very little about Yemeni history and society, but somehow are qualified to meddle in the formation of the government’s systems. There remain very few, if any, Arab modules of effective decentralization. All the attempts so far are poorly copy-pasted from western manuals, which might present very effective modules in theory, but are not necessarily appropriate in the Arab world.

In Yemen, the recent interest in decentralization, or federalism, builds upon earlier attempts. The negotiations between South and North Yemen in 1994 led to an agreement that established the basics for electing governors. Both political parties, the General Public Congress representing the north and the Socialist Party representing the south, agreed that the main challenge their newly born unity faced was the strict, intensive centralization of decision making. Ultimately the proposed decentralization law was not implemented due to the outbreak of civil war months later.

With the launch of the National Dialogue Conference (NDC) in March 2013 aiming to solve the problem of southern separatism, the idea of federalism gained a strong following, especially among international organizations and diplomats who negotiated the political deal and now monitor its implementation. After the conference ended in early January 2014, President Abd Rabbuh Mansour Hadi issued a decree appointing a committee to determine the number and size of regions. A little over a week later, the committee announced that the Republic of Yemen would become the Federal Republic of Yemen, a country now divided into six regions. 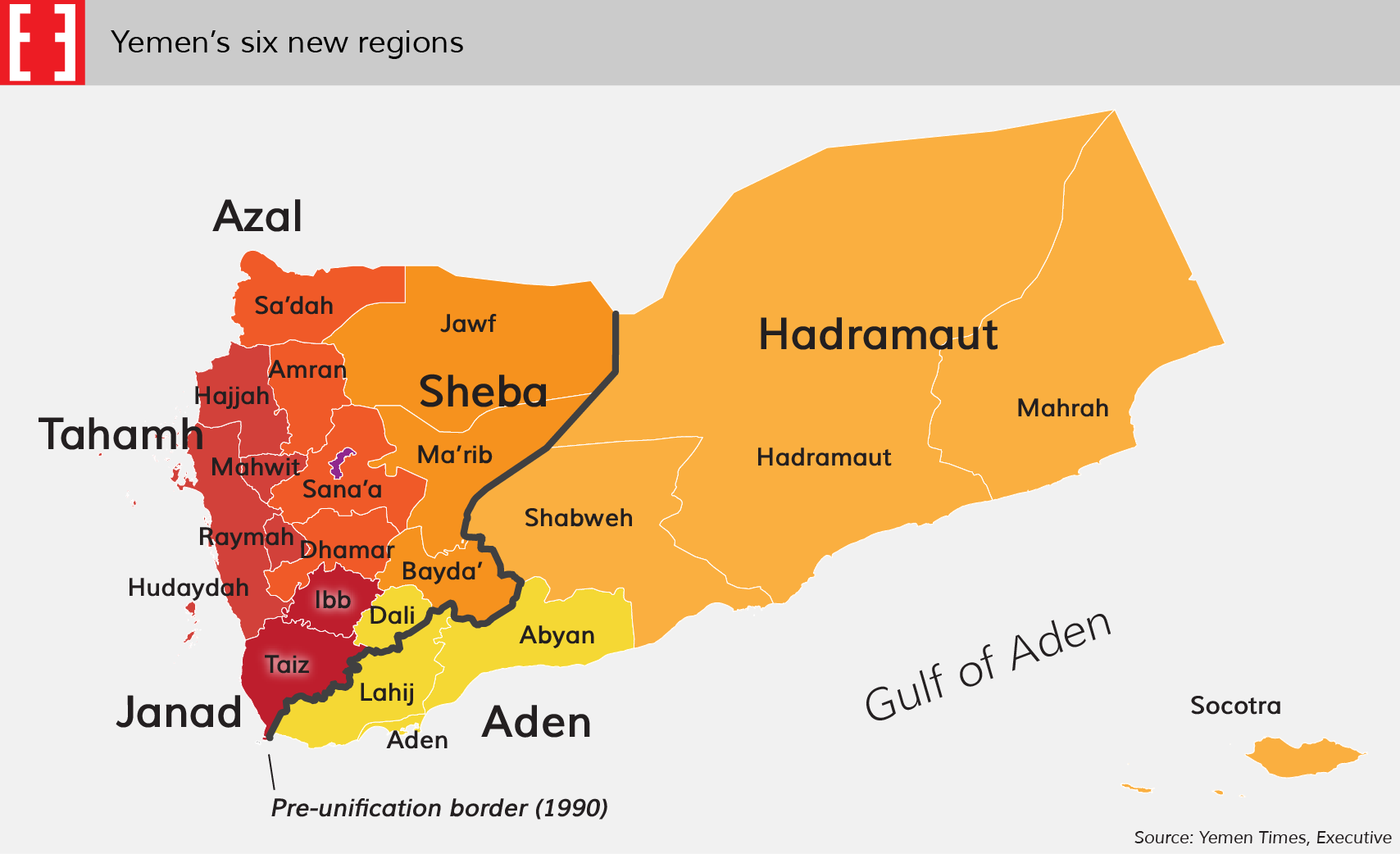 This season of federalism isn’t a consequence of thoughtful diagnoses. If one analyzes the tensions that led to the current issues in south Yemen, an overly centralized government was not the main source of the problem. Land disputes, military officers sacked from their jobs, local identities deleted and a whole host of other issues played a more important role.

During the recent national dialogue, the deliberations over decentralization proceeded in a very hasty fashion. The system was discussed, presented and decided upon in less than two weeks, and it was done without a robust analysis of long-term economic, social and political implications. The confused and often contradictory debates between different political actors and groups made one thing very clear: no two people at the NDC had the same understanding of what federalism meant.

Moreover, deeply entrenched positions hindered true consensus. The Yemeni president has stressed all along that federalism would maintain Yemen’s unity. While most southern movement factions boycotted the NDC, those who participated only agreed to federalism because they saw it as a path to eventual independence. Other southern movement groups rejected federalism on the grounds that it would legitimize the central government’s authority and inhibit any progress toward true autonomy. Meanwhile, political powers in the north such as the Islamists and the General Public Congress, the former president’s party, accepted it because they saw it as a system that would prevent the south from seceding.

And, not surprisingly, oil interests play a huge role. Yemen’s Hadramout region generally favors President Hadi’s move to federalism because it will grant local authorities greater control over its rich natural resources. The reverse logic explains the anti-federalism stance of some political leaders in the north, where powerful groups accustomed to relative autonomy fear the meddling of provincial authorities in oil contracts.

From the perspective of large multinationals, these changes raise concerns that have to do with the continuity of the current oil contracts with the central government all around Yemen. During the NDC’s negotiations, Total lobbied aggressively and successfully ensured that the company’s contracts would remain outside the control of new provincial authorities. Total went into a huge public relations crisis in Yemen when the media published that it was against federalism in order to maintain its oil interests.

[pullquote]If one analyzes the tensions that led to the current issues in south Yemen, an overly centralized government was not the main source of the problem.[/pullquote]

Despite the centrality of economic interests in shaping positions for or against federalism, still other ethnic, religious and cultural reasons play an important role. Kurdistan’s experience in Iraq remains a model for other ethnicities in neighboring countries desiring autonomy. Amazighs in Libya continue to fight for their language to be one of the country’s official languages. Provinces like Mahra and Socotra in Yemen welcomed the move towards federalism as it theoretically provides greater protections of their non-Arabic linguistic heritage. The bloody clashes of the last few weeks in Libya make it very clear that the inability of the central government to assert control can lead to chaos. A weak central government can’t protect minorities or enforce national law if local entities are provided with more power, especially in fragile Arab Spring countries.

What happens in cases where an armed group controls a given region? It remains unclear how, for instance, the Houthis in Yemen will respond to increasing federalism. As Hezbollah enjoys near total control over south Lebanon, the Houthis control an even larger chunk of territory in northern Yemen. Devolving power to such groups is tricky, as they are in many respects even stronger than the central government. Many fear that the advent of federalism will unleash new violence as the Houthis reassert control in the face of new provincial authorities. Other governorates could also fall into the hands of extremist armed groups if the transition to the new administrative system is mismanaged.

As these conversations around federalism continue, it is important to keep in mind that governing a territory as large and complex as Yemen requires much more than mere bureaucratic efficiency. While the prospect of getting government documents signed in one’s home district rather than being forced to travel to the capital is appealing, such potential conveniences do nothing to address the deeper problems facing the country. The severe economic and political challenges facing Yemen and other states in the Arab region will not be resolved by a simple move to decentralize power.

The case for increased cycling in Lebanon