Home OpinionComment Time to wake up

Time to wake up

Lebanon and the international community must not abandon Syria’s refugees

Following deadly attacks such as the ones that struck Paris in November 2015, western leaders and the media largely focus on increasing security measures and closing borders in order to keep ‘terrorists’ – which to some is synonymous with keeping refugees – at bay. This policy of closing borders is not new, however, and is often used to scapegoat refugees for the very crimes they themselves are fleeing from.

Since the huge influx of refugees to Europe over the summer, several high level European Union summits have been held in order to discuss how to respond to the ‘migration crisis’. Responses have centered largely on how to tighten borders, build more fences and find ways to stop refugees from leaving the first countries they fled to, known as the host countries. Many western European leaders responded to the huge flows of refugees trying to reach Europe’s shores by promising more money to the main host countries. Several high profile visits by European leaders have been made to Lebanon, Turkey and Jordan with the objective of negotiating increased humanitarian assistance to the region in exchange for tighter controls on irregular migration routes.

The international community’s inadequate humanitarian response to alleviate the suffering that Syria’s refugees have endured due to the brutal and protracted conflict in Syria and the precarious conditions which they have been living in for the last four years is shocking. Countries in the region, including Lebanon, have over time increased restrictions on Syria’s refugees entering the country. And for those already in Lebanon regularizing their stay or renewing their residency permits has become incredibly cumbersome. Western governments have chosen to remain silent on these issues. This is likely because of their own unwillingness to accept more Syrian refugees and their desire to ensure that the majority of refugees continue to be hosted by Syria’s neighbours.

Lebanon, which has the highest number of refugees per capita in the world, has struggled to cope with the over 1 million refugees, including Palestinian refugees, from Syria. Among the country’s concerns are fears of security incidents such as the attack in Beirut in November 2015, critically underfunded humanitarian appeals year after year, tensions between refugees and host communities and worsening socio-economic conditions.

However, the restrictions imposed by Lebanon have made the situation increasingly untenable for Syria’s refugees making it harder for them to seek asylum. In May 2014, the Lebanese government imposed new entry requirements for Palestinian refugees from Syria, including the need for a pre-approved valid visa from a Lebanese guarantor, effectively closing the border to them. Following this, in June 2014 the government announced that only Syrians from areas bordering Lebanon where fighting was taking place, would be allowed to enter. In January 2015, guidelines issued by the government came into effect, imposing new entry requirements on Syrians seeking safety in Lebanon. Categories for entry into the country include tourism, education, medical treatment and business. A category for ‘displaced’ was included but remains very narrowly defined and does not include those fleeing persecution. And finally in May this year, the UN Refugee Agency, UNHCR, was ordered to suspend all Syrian refugee registration and ordered to de-register those who had entered in 2015.

To their credit, until October 2015, the Lebanese authorities stood by their word not to forcibly return refugees to Syria. Any such returns would contravene the core principle of non-refoulement under international law, which prohibits the transfer of individuals to another country or jurisdiction where they would face a real risk of serious human rights violations or abuses. In October, this promise was almost broken when four Syrian refugees who had flown from Syria to Turkey were sent back to Lebanon, held by General Security and escorted to the Lebanon-Syria border. The intention of the General Security officers in charge was to deport them to Syria. Once the information reached the Minister of Interior, the deportation was halted.

Two Palestinian refugees from Syria were less fortunate. In November the brothers attempted to leave for Malaysia via Turkey. When they landed in Turkey, rather than letting them continue their onward journey, Turkish authorities put them on a plane back to Lebanon. In Lebanon they were detained by General Security officers before being escorted to the Lebanon-Syria Masnaa border crossing and forcibly returned to Syria. The brothers feared returning to Syria where they were due to serve their obligatory military service. Instead they remained in no-man’s land and appealed to the international community to protect them. A few days later, the Lebanese authorities allowed them to re-enter Lebanon for a limited period of time.

In addition to border closures, new criteria for renewing residency permits for Syrian refugees were introduced in January 2015. The highly complex and costly criteria for renewing residency permits has resulted in it being almost impossible for most refugees from Syria to regularise their status. The inability to legalize their stay has drastic consequences for refugees from Syria. Refugees with irregular legal status are exposed to a range of increased vulnerabilities, including the risk of harassment, arrest and detention by Lebanese authorities and exploitation. Freedom of movement is also curtailed due to the fear of crossing checkpoints without a valid residency permit. This in turn impedes refugees’ access to services including health care and education. 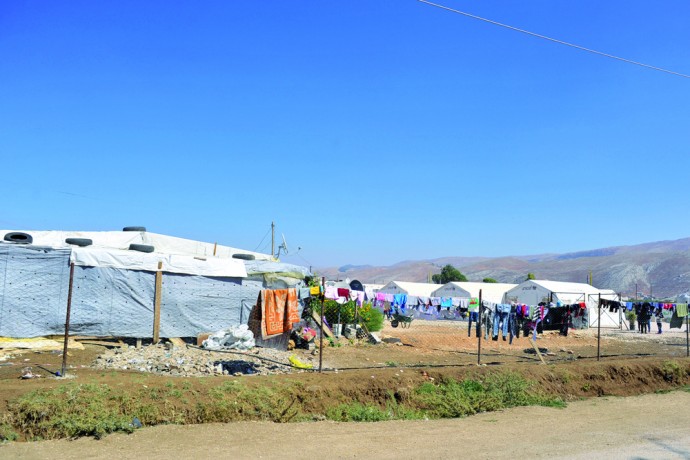 In order to renew residency permits, each Syrian over 15 years of age must pay an annual fee of $200. Additional costs such as transportation to relevant offices, public notary services and photocopying costs amount to an estimated additional US $230 – making the whole process cost almost twice the amount of the renewal fee. Furthermore, those registered with UNHCR must sign a ‘pledge not to work’. Those who are not registered with UNHCR must provide a ‘pledge of responsibility’ from a Lebanese national – this acts as a sponsorship for a work permit and requires the sponsor to take full responsibility for the Syrian person’s employment, housing, healthcare, food and other costs. All Syrian refugees must produce a ‘housing pledge’ which is confirmation from a Lebanese national that they lease a property to a refugee, or – for those living in informal settlements – a residency statement from the municipality. Anyone who entered the country through irregular borders is denied the chance to regularize their stay. Instead they must pay a fee of $633 and leave the country within five days. They can re-enter only if they meet the new entry requirements. If they are unable to pay the fine, they are permanently banned from re-entering Lebanon.

For most refugees, who rely on humanitarian assistance and, some on a low-income job in the informal labor market, the likelihood of affording to renew their residency permit is very low. UNHCR provides cash assistance to 29% of Syrian refugees who are considered the most vulnerable though the number of those considered vulnerable and in need of cash is around 50%.

For those who receive World Food Programme (WFP) food vouchers in the form of e-cards, over half cited them as their main source of livelihoods. Due to funding cuts, the WFP stopped providing food vouchers to one third of Syria’s refugees in Lebanon and Jordan over the summer and reduced the amount of assistance received by Syria’s refugees in Lebanon to $13.50 per person. In September they capped the number of people per family receiving a voucher at five people per household. An injection of funding in October 2015 has allowed WFP to increase the amount provided to $20 per person, per month. This source of humanitarian assistance has proved to be unreliable for most and even with the increase in the value of the food voucher, those receiving them are living on around $0.60 a day. Furthermore, in summer 2015, UNRWA – the UN Agency providing assistance for Palestinian refugees from Syria, cut assistance for shelter due to funding shortfalls. Faced with even more restrictions than Syrian refugees, including the need to renew residency permits every three months, the majority of Palestinians were wholly reliant on that funding as a source of livelihood.

Between January and September 2015, UNHCR have de-registered 149,000 Syrian refugees. Some were de-registered upon the request of the Lebanese authorities for having entered the country in 2015 while others were deregistered for other reasons. The other four most likely possibilities are: they gave up hope of a better life and returned to Syria; they chose to stay in Lebanon and are no longer motivated to be registered with UNHCR due to lack of assistance; they have found a Lebanese sponsor; they moved to a third country. UNHCR has reported an increase in onward movements of refugees from Lebanon in the second half of 2015 – though most of those leaving have come directly from Syria and transited in Lebanon. What is clear is that unless conditions improve and refugees are permitted to remain legally, staying in Lebanon for the longer term is not a viable option for refugees from Syria.

In order for refugees from Syria to be able to survive in Lebanon and to live in a dignified and sustainable way, the Lebanese government needs to ensure that no refugees who have fled Syria are forcibly returned by any manner whatsoever, including deportation or rejection at the border. It must ensure that refugees from Syria are able to renew their residency in Lebanon until there is a fundamental change in circumstances in Syria – meaning that it is safe to return. To this end, it should remove obstacles to residency renewal including removing the onerous criteria required and waiving the $200 fee.

The international community must significantly step up and substantially increase financial contributions to the UN and other humanitarian and human rights organizations responding to the crisis. It also needs to support the government of Lebanon in increasing the capacity of public services to meet the needs of refugees and the host communities that are impacted. Finally, it needs to share responsibility with Lebanon and its neighbours and increase the number of resettlement places provided to the most vulnerable refugees from Syria, including Palestinians who have fled Syria, over and above existing quotas. Refugees who are fleeing war and persecution must not be punished – they are fleeing the same violence and attacks that fatally struck Beirut and Paris in November 2015.

A different version of this article appeared in the December 2015 print issue of Executive.

The end of the li(n)e

Lessons from our chaos

In the crossfire of regional elections