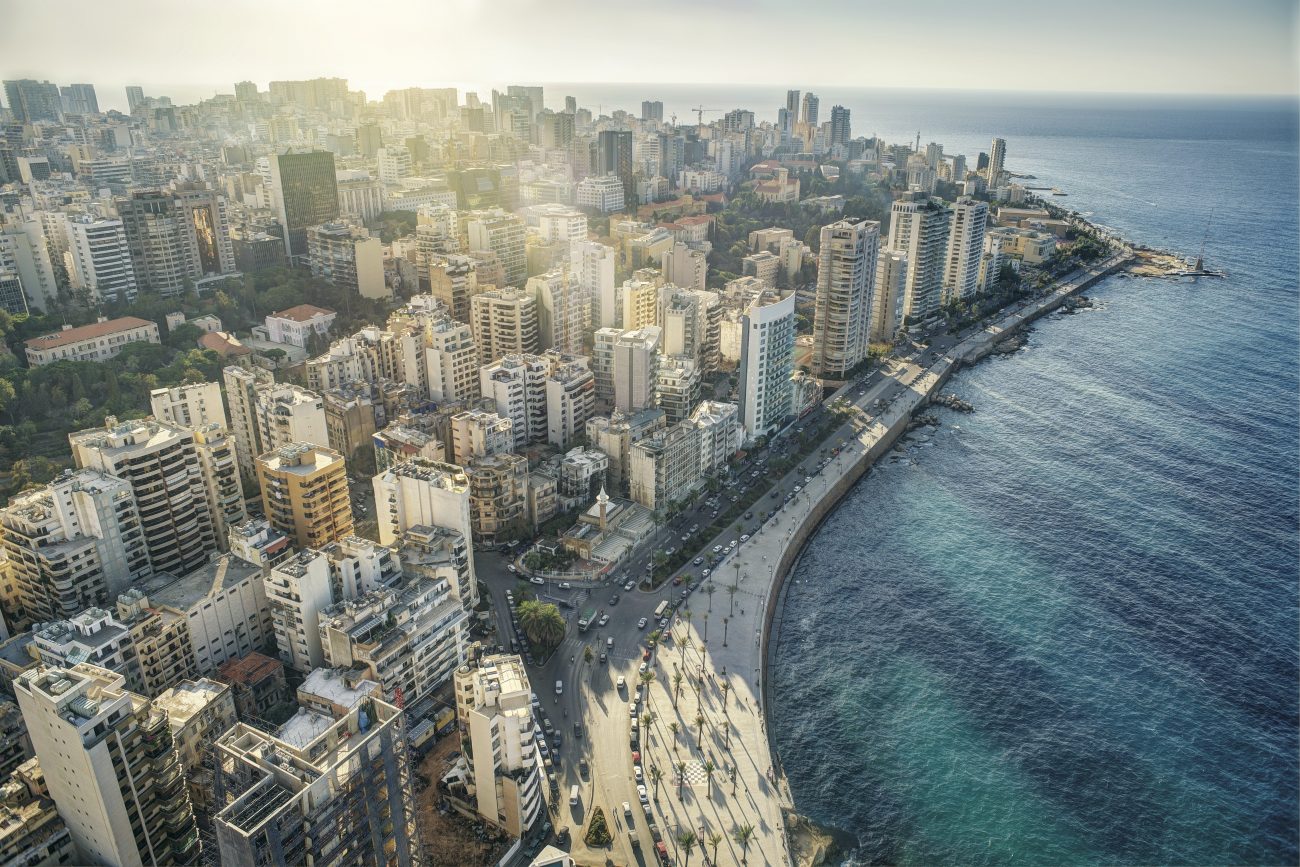 Going into 2017, real estate stakeholders were riding a wave of optimism spurred by the end of a nearly three-year presidential vacuum and the formation of a unity government. After several years of market stagnation, developers willed themselves to believe that consumer confidence would be restored and residency uptake would finally resume. Buyers were also hopeful that political stability could improve the economy and enhance the investment climate. Yet the enthusiasm proved to be a setup for collective letdown as 2017 quickly became another disappointing year for the real estate sector.

Shortly after the appointment of a cabinet, Parliament turned its attention to increasing both public sector salaries and state revenues via the imposition of new or increased taxes and fees. A number of these fiscal measures targeted the real estate sector, increasing the price of each ton of cement and applying a 15 percent capital gains tax on secondary residences. For developers who were already struggling to maintain profit margins amid an economic downturn, the timing could not have been worse.

“We were really optimistic about 2017 because we had a president … [and] we have a new law for elections, plus we felt there was potential in the last quarter of 2016. So this is why we wanted to finish our [projects] in order to prepare for 2017,” says Ghada el Khatib, COO of Plus Holding. “Unfortunately, the government doesn’t help in any sector … You know it’s like they act like our enemy, not our supporters,” she explains, referring to the new tax regime.

According to the Byblos Bank/AUB Consumer Confidence Index, end users in Lebanon are feeling more positive overall compared to the monthly average in 2016, although the sentiment has not been sufficient to substantially boost sales amid consumers’ high expectations for 2017. Throughout the year, the tax law persistently weighed on consumer appetites. Parliament’s discussion of the law alone caused confidence to decline four months in a row from January to April. The largest drop was noted in July when the index tumbled 13 percent after the tax law was passed.

While Executive was unable to compare this year’s sales transactions figures from the Central Administration for Statistics (CAS) to its existing data set (as the numbers have yet to be released), statistics from the General Directorate of Land Registry and Cadastre (LRC) appear at first glance to contradict the dismay expressed by industry professionals. According to LRC figures cited in a report by Bank Audi, there was a 15 percent year-on-year increase in real estate transactions from January to July.

It is doubtful that the number of transactions is actually reflective of a significant recovery in market activity, however. Transactions are tallied using property registrations, and buyers in Lebanon are able to defer these registrations for several years. An official at the LRC explained that many buyers were pushed to register their properties in 2017 due to a rumor that the government would hike registration fees, thus accounting for the uptick that otherwise suggested a sales surge no developer has reported.

Although the fee-hike rumor proved to be false, it was based on a real change in the registration process. Following the implementation of the new tax law, buyers can no longer delay paying the entirety of their registration fee by holding off on registering the purchase. The new law says buyers must pay 2 percent of their asset’s value immediately, regardless of when they register it. This misunderstanding likely caused a surge of registrations for properties that were acquired in previous years before title deeds were turned over.

With the exception of sales transactions figures, most real estate sector indicators showed little change. When changes were identified, they often reflected a downward trend. For example, cement deliveries fell by 105,626 tons to 3,787,589 from January to September of this year compared to the same period of 2016. This may point to reduced building activity, although cement production operates somewhat independently of the real estate sector and includes infrastructure projects, as well as exports.

Since 2011, local buyers in need of new housing were fueling demand. For these prospective buyers, budget tends to be the determining factor in their acquisitions. Indeed, Bank Audi noted a “flurry of apartments/studios below 150 square meters” coming onto the market in 2017, representing a strategic pivot to smaller units that developers made when the slump started.

“There hasn’t been much change in the dynamics of the residential real estate sector in Lebanon in 2017,” explains Nassib Ghobril, chief economist at Byblos Bank. “The sector, generally speaking, is still stagnating. The only active segment of that sector is the small-size apartments, 150 square meters and below, and the demand is coming from people who qualified for the Public Housing Corporation [subsidized] mortgage package. That’s about it. Basically that’s what’s driving demand for residential real estate in the country.”

And while official asking prices for residential property have hardly budged since 2011, RAMCO, which tracks the price of developments in municipal Beirut for projects starting at $3,000 per sqm on the first floor, calculated a drop of only 1.7 percent in 2016 with a similar decrease of under 2 percent expected in 2017. In reality, developers are being forced to offer large discounts in order to sell their stock.

Marwan Mikhael, head of research at Blom Bank, explains, “Starting with the downturn in 2012 until now you will have a decline in prices depending on where you stand. For me, the market, you have to divide it into the luxury market, the middle market, and the low market. In the luxury market, you have a decline of 30 to 40 percent in price since 2012 until now. In the middle you have between 15 and 25 percent decline, and on the low side, you have 10 to 15 percent.” 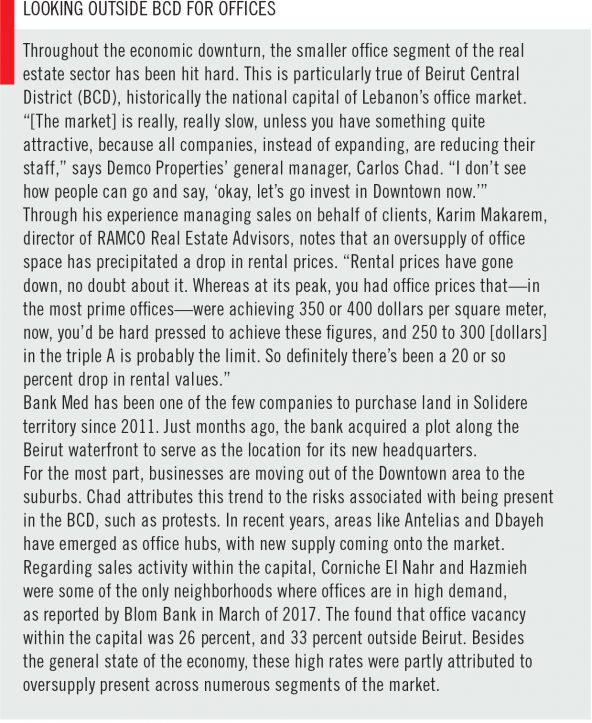 Amid low consumer confidence and a growing quantity of housing at ever cheaper rates, prospective buyers are not in any rush to make housing purchases. In response, developers are experimenting with a range of coping strategies to survive this period of economic stagnation. Mohamad Sinno, managing director of the real estate consultancy Vertica Realty Group, says that one of his clients has introduced a lease-to-own arrangement at the Beirut Terraces. Demco Properties is also considering a similar option whereby renters would pay 5 percent of the apartment’s value to put a hold on the residence for a rental period of up to three years. Later, if the tenant decides to purchase the unit, 50 percent of the accumulated rent would be deducted from the final sales price. This arrangement could help developers attract buyers without the negotiation of hefty discounts that cut into their margins.

Other companies are putting their hopes in other markets altogether. Khatib says that Plus Holding is looking to finish its current projects as soon as possible while expanding outside of Lebanon. “We are trying to get new markets, like in Cyprus and Greece. We are mushrooming outside the country because Lebanon for us is our country, we have to keep a good reputation, a good quality, a good service. But is it a profitable country? No it’s not, unfortunately,” laments Khatib. “Do you want to invest more in this country for the time being? No.”

The government is also attempting to stimulate investment in the sector through an initiative by BDL, in conjunction with the ministry of foreign affairs. Together, these institutions are reaching out to Lebanese expatriates with high purchasing power by introducing a housing loan tailored specifically to them. The so-called expat mortgage allows Lebanese residing outside the country to borrow at a 2 percent fixed rate for up to 30 years.

For now, it is too early to tell how impactful the expat mortgage could be. Subsidized housing loans for resident, first-time homebuyers enabled by BDL have been keeping the sector afloat since 2012. Ghobril notes that the value of mortgages has nearly tripled since 2010, from $4.5 billion to $12 billion at the end of 2016. In 2017, the number of outstanding mortgages is thought to be around 125,000.

Fourth quarter lending may be diminished due to confusion surrounding the disbursement of the central bank’s subsidies. Several economists and industry stakeholders interviewed by Executive said the central bank had instructed commercial banks to suspend lending at subsidized rates until early 2018. This was said to be due to the central bank maxing out its budget for subsidies early in the year. An official at the central bank contradicted this notion, asserting that all subsidized mortgages were frozen for two weeks starting on October 5. On October 20, the Public Housing Corporation reintroduced its loan at a 3.6 to 3.8 percent interest rate. The expat mortgage, and another loan subsidizing office space for SMEs, were switched from lira to dollars. According to the official, all other subsidized mortgages are currently being approved.

For the most part, developers are ready to put 2017 behind them, while trying to remain optimistic about a Doha Accord-style u-turn in the upcoming year. However, industry professionals acknowledge that the surprise resignation of Prime Minister Saad Hariri stalled what little momentum had been achieved prior to November. With political jostling still unresolved, the light at the end of the tunnel remains a distant dream for Lebanon’s real estate sector.