No stimulus, no problem

The potential silver lining in the restriction of subsidized mortgages

Since 2013, Banque du Liban (BDL), Lebanon’s central bank, has announced over $6 billion in annual stimulus packages to prop up the country’s faltering economy. A range of sectors, from energy to education, have benefited from stimulus-facilitated credit, but none more so than the real estate market. Year after year, property developers and consumers have grown to expect and rely on the disbursement of BDL-subsidized mortgages, which have attracted the lion’s share of the government’s stimulus money.

For years, bankers and real estate executives have said that the market is driven almost entirely by purchases with subsidized loans. Perhaps this is why the latest billion-dollar stimulus package caused such a stir following its anticipated but delayed announcement. On February 2, new measures were introduced through Circular 485 that hiked mortgage interest rates, tightened qualifications, and shortened maturities on subsidized housing loans for certain banks. For the first time, BDL predetermined a $500 million tranche of the stimulus package to be distributed among banks for 2018. But on February 23, BDL’s governor, Riad Salameh, revealed that several banks had already nearly exhausted their quota of stimulus funds for the year. Furthermore, Salameh added that he would not grant a follow-up stimulus package to the banking sector as he had the year before.

While the restriction of mortgages and the early depletion of ear-marked subsidies may sound alarming to prospective home buyers, others welcome the notion of a real estate market uninfluenced by BDL’s supplementary financing. Opponents of the stimulus package say that government interventions enable buyers to afford expensive real estate and sustains housing prices out of the reach of many consumers.

“In terms of supply, buildings are being built and projects are being developed, but demand is being inflated by these subsidies,” explains Walid Marrouch, associate chair of LAU’s department of economics. “In economics, we call it demand-side management. You can intervene in the market in two ways—demand-side management and supply-side management—or you can do nothing. Usually, demand side-management doesn’t help the buyers. It helps the sellers. It doesn’t allow prices to go down. So who benefits? The banks and sellers; the developers.”

A recent master’s thesis by Jamila Youssef, a 2017 graduate of the Lebanese American University’s applied economics program, tracked the effect of monetary policy on housing prices from 2000 to 2016. Under Marrouch’s advisory, Youssef created a proxy for real estate prices by dividing the total value of real estate transactions, supplied by the Order of Engineers, with the total number of transactions from the Central Administration of Statistics. Using import values as a control variable, she studied the new, monthly price-per-transaction figures against interest rates and the loans to the private sector.

Observing the results of the study, Marrouch feels confident that BDL’s policy aimed to prevent housing prices from declining. “When you look at the time series of the data between 2000 and 2016, you notice there’s a change in the trend [of evolving real estate prices],” he says, in reference to the graph of interest rates and housing prices. “Between 2000 and 2006, there’s a relatively flat trend; between 2006 and 2011, the trend changes and becomes steeper. Then, after 2011, after the Syrian crisis started, it started to flatten out. But then, when you look at the intervention of the central bank with these circulars to subsidize loans and other things, they start to occur when [prices] start to flatten … It seems that the intervention was there to support the price.”

Ali Termos, a professor of finance at the American University of Beirut, charted price-per-transaction figures using similar data for a study commissioned by the Ministry of Environment. He notes that the proxy seems to reflect actual market activity fairly accurately. Although Byblos Bank maintains an index of housing demand, he says Lebanon still does not have a proper, national housing-price index that tracks the value of individual properties over time.

RAMCO Real Estate Advisors monitors the prices in Beirut’s downtown area for projects starting at $3,000 per square meter, and has found marginal declines under 2 percent in recent years. However, these are asking prices, and are not representative of the market as a whole. Anecdotal reports acknowledged by RAMCO suggest that developers are offering substantial discounts of up to 30 and 40 percent in order to liquidate their stock.

In light of the reductions of final asking prices, some economists have cast doubt on the inflationary effect of the stimulus packages. Nassib Ghobril, chief economist at Byblos Bank, says, “Housing prices declined since 2011 after the boom years, and the market was stagnating, so mortgages were taken for specific sizes for small apartments in general. We have been in a buyers’ market for real estate, so there was no risk of price inflation because of the stimulus. It was a way to generate demand in a very stagnated real estate market, and the demand generally remained in the small-size—sometimes medium-size—apartments.”

On the other hand, Jihad Hokayem, a lecturer in real estate investment strategy at the Lebanese American University, believes that the country is in for an impending wave of price declines due to a slump in oil prices from 2016. Citing his own research, Hokayem tells Executive that the falling value of hydrocarbon resources has weakened oil-dependent economies in the region where Lebanese expats often work. As a result, remittances to Lebanon will eventually decrease as well, reducing local purchasing power and eroding housing demand. By October of next year, Hokayem predicts that prices could fall as much as 55 percent from their peak in 2011. This, he says, creates a dilemma for BDL.

Supporters of the stimulus packages, like Massad Fares, a representative of the Real Estate Association of Lebanon, say that keeping the real estate sector afloat is important for the functioning of the economy as a whole. “To make a building, you need 70 different trades. It activates the whole economy. It activates industry; it activates workmanship, the aluminum, the tiles, the import, the export, everything,” says Fares. “When there’s no construction, [none] of these people are working.” Fares adds that real estate developers will lobby the government to implement its own stimulus measures amid concerns that BDL can no longer afford the subsidies.

The central bank claims that stimulus packages—and the real estate sector they subsidize—have been key to sustaining the economy since they were first introduced. According to comments published in The Daily Star, Salameh stated in 2016 that the incentives contributed to approximately 67 percent of GDP growth, which the World Bank estimates at 1.8 percent that year. By 2018, he said that 120,000 people had benefited from subsidized loans since the first stimulus package in 2013, as reported by LBCI in February. Economists disagree on the accuracy of these figures but say that it is difficult to make an independent assessment without data from BDL.

Regardless of the stimulus’ current economic impact, some critics believe that subsidies would be better applied to other sectors. While real estate sales may generate high revenues, those profits are accrued through one-time transactions, explains Marwan Mikhael, head of research at Blom Bank. 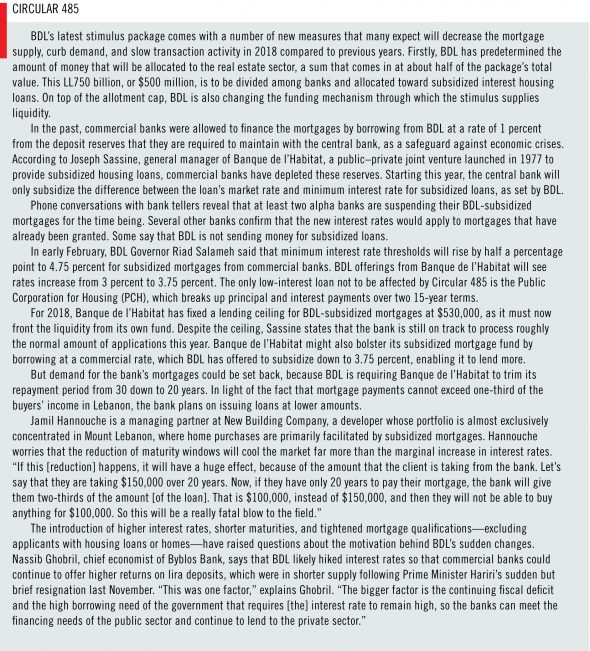 “[The stimulus] is contributing to year-on-year growth but its not increasing the potential GDP, which makes it, to a certain extent, unproductive. If you had a stimulus, for example, for a certain industrial sector, and the investment is increasing potential GDP, then at a certain time you stop the subsidy, and the system is able to generate growth in the future, sustainably. But for real estate, the sector by definition does not create sustainable growth,” says Mikhael.

If the stimulus were to be cut off, Hokayem thinks that prices would have no choice but to readjust in line with local purchasing power. Subsequently, the extra cash available to Lebanese households would be reinvested in other sectors.

“Instead of allocating 30 percent or 20 percent of my salary to pay my monthly installment for real estate, I can just pay 15 percent, and [with] the remaining, I go more to restaurants, I change the furniture of my house. I’m going to make a certain cycle in the economy,” Hokayem says. “There will be [a] multiplier effect and GDP is going to increase. So you have to bear in mind that the decrease in real estate is beneficial for the Lebanese economy.”

Whether housing prices would deflate in line with local purchasing power, and how long that would take, is anyone’s guess. In 2018, BDL’s demand-side management continues to inject liquidity into the market, albeit in a restricted form. The disbursement of subsidized loans may be set to abate, but low interest financing will remain available through other lending institutions, such as the Public Corporation for Housing and Banque de l’Habitat. Prices could continue to drop as offers from commercial banks dry up, but, for the short term at least, consumers should plan to budget within their means.

What’s the deal with garbage decentralization?

Is there a real estate crisis?

Pegged urbanization and the (in)stability of Lebanese capitalism

The scramble to sell as Lebanese real estate...