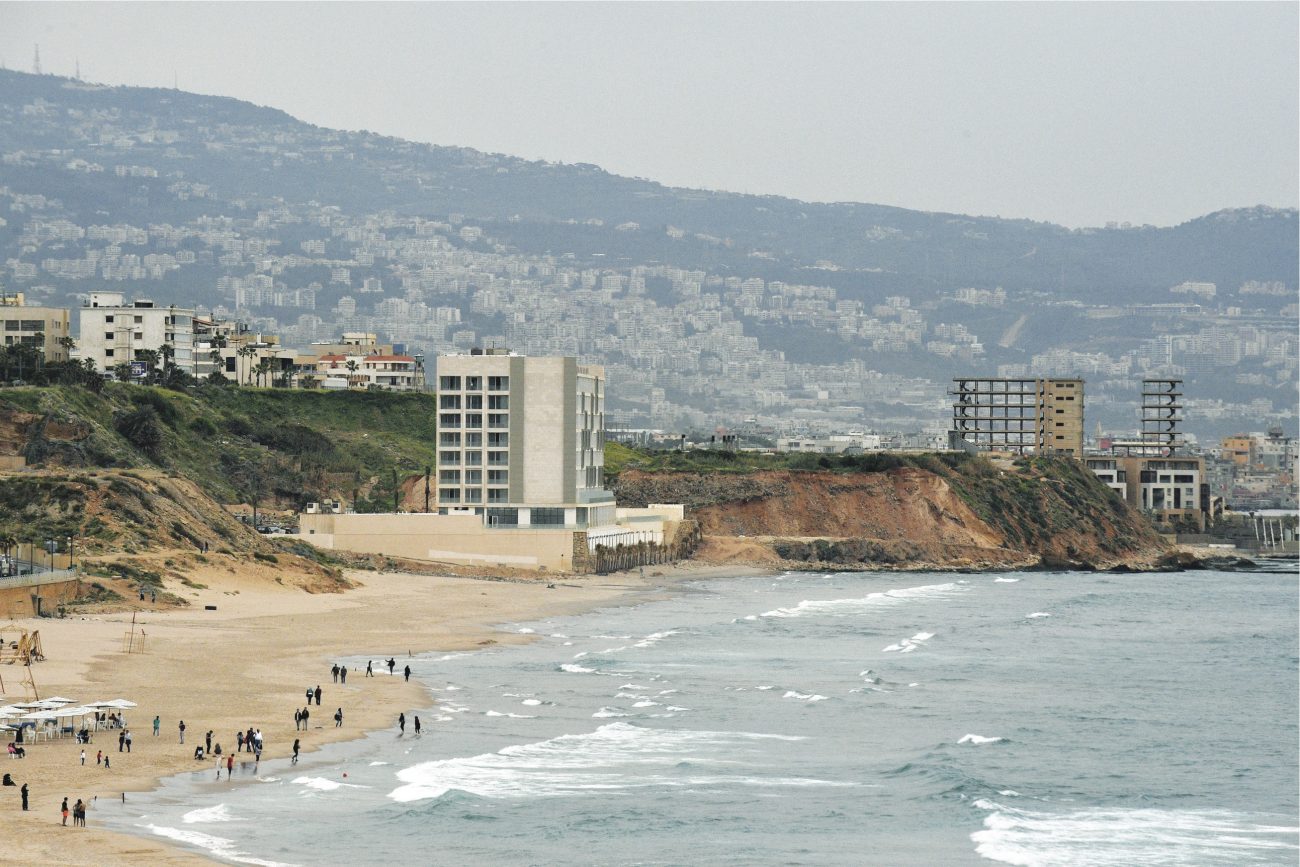 While it is widely assumed that Lebanon’s real estate business is rife with unethical dealings, only a few detailed examples of wrongdoing actually come to light. In the case of Eden Bay, a resort situated along Ramlet al-Baida—Beirut’s last public beach—evidence of violations and fraud piled up throughout 2017.

The disclosures culminated in the form of a report compiled mid-2017 by the president of the Beirut Order of Engineers and Architects (OEA), Jad Tabet. The report alleges eight violations related to Eden Bay and is informed by building documents released by the Municipality of Beirut. The report’s allegations range from the infringement of public property to the forgery of permit application material. As a whole, Tabet’s report portrays a development project for which legal obstacles were fudged or ignored entirely to deliver the lucrative seafront hotel. Public pressure from media coverage, a unified civil society movement, and even lawsuits initiated by NGOs and the environment ministry  have not prevented the completion of the hotel.

With the façade completed in recent months and the resort aiming to open this April, Eden Bay’s opponents now view the ineffectiveness of these efforts as proof of the public sector’s failure to adequately govern the real estate market.

According to Tabet’s report, violations related to the hotel date back to before it was actually conceived.

Initially, the real estate giant that owns Eden Bay, Achour Development, had planned to establish a larger resort in the same location. To manage the project, Achour created a company named Beirut Marina Gate, which set about purchasing two plots of land in the area. In 2011, Beirut Marina Gate signed a contract to buy two parcels—numbered 3689 and 3687 by the Directorate of Land Registration and Cadastre (LRC)—from a company called Eden Rock Real Estate and Tourism.

But, according to the report, Parcel 3689 was the product of an illegal merger that combined four smaller plots earlier the same year. Two of these component plots were categorized as non-buildable and therefore could not be merged with the others that were eligible for development.

However, in a letter dated June 6, 2012 and seen by Executive, Beirut Governor Chebib requested that the LRC remove the non-buildable status classifications from the properties. The LRC complied, merging the plots into Parcel 3689 without the required approval from the judiciary.

Lama Karame, a lawyer with the non-profit Legal Agenda that monitors public policy, says that the unification of the parcels is one of several violations that should have prevented the construction of Eden Bay from moving forward.

Despite the apparent illegal origins of Parcel 3689, it was sold in 2011 along with Parcel 3687 to be used for Achour’s resort, which was also named Eden Rock. Cynthia BouAoun, an architect that has contributed to the coastal protection campaigns of the heritage advocacy NGO Nahnoo, says that Achour then pooled Parcels 3687 and 3689 in a move that grouped them but did not formally merge them in the records of the LRC. This, she says, was done in order to meet the 20,000 square meter minimum developable threshold that was required to build the Eden Rock resort in the zone.

For reasons that have not been publicly disclosed, Achour later dropped its plans for Eden Rock, having only completed the necessary Environmental Impact Assessment (EIA) for the project, according to the report. The developer incorporated a new company, Eden Bay sal, to oversee the establishment of a smaller resort. Karame says that Parcels 3689 and 3687 were ungrouped by the LRC and the former was transferred to the new Eden Bay project; however, she explains that the Municipality of Beirut was not informed of this change, so when Parcel 3689 was transferred to Eden Bay, the project was entitled to a larger building than what would have been allowed if the decision had been based on the size of Parcel 3689 alone.

An unusual decision by the Directorate General of Urban Planning (DGUP) also facilitated the creation of a resort that would have been too large by normal standards. Mona Fawaz, a professor of urban planning at the American University of Beirut who helped research Tabet’s report, explains that development projects close to the shoreline are by convention set back from the sea by at least 20 meters in most places along the Lebanese coast. But in 1964, Fawaz says Beirut’s zoning regulations were changed, and the setback from the public maritime domain was no longer specified. Since the change, however, the DGUP has generally applied the old 20-meter standard.

Fawaz says that in the case of Eden Bay, the DGUP in 2015 suddenly dropped this standard and instead deferred to the building law, which states that the setback for most public property is only two meters.

Even with the diminished setback,  Tabet’s report alleges that Achour went on to increase its building size beyond what is allowed by local zoning regulations. The report highlights a substantial discrepancy between the ground elevation claimed by Eden Bay and the elevation from state sources. Mona el-Hallak, an architect and activist, believes that the company tried to pass off levels now marketed as luxury beachfront chalets as underground parking space, which would legally be omitted from the project’s tally of buildable area.

Tabet writes that the topographic map that was submitted for the resort’s construction permit defines the ground height at 7.7 meters above sea level. However, geographical images from the Directorate of Geographic Affairs of the Lebanese Armed Forces mark an elevation of 1.4 meters.

The report acknowledges that the Eden Bay development was originally meant to be built into a hill, which means one side of these floors would have been partially below ground. However, Hallak says the earth has since been cleared away, exposing the two lower stories meant for parking, leading Tabet to conclude in his report that Eden Bay had planned the alterations from the start.

Tabet calculates that the addition of these two levels and the apparent illegal unifying of properties in Ramlet al-Baida doubled the project’s built area from 5,251 to 10,439 square meters. That would mean that Eden Bay exceeded the maximum building size by about twice what was allowed for Parcel 3698.

But even without the aforementioned violations, Tabet argues that the location should never have been cleared for development in the first place, as the country’s national urban master plan, decreed in 2009, specifically declares that Ramlet al-Baida should be protected from real estate construction works.

In spite of these issues, a construction permit was issued by the Beirut Municipality for the Eden Bay resort in September 2016. Yet, Tabet’s report states that Eden Bay failed to commission a new EIA to accompany the permit.

In a 2015 interview with Executive, Achour’s lawyer, Bahij Mjahed, claimed that the EIA from Eden Rock would cover the construction of the Eden Bay project. However, Ralph Haddad, an attorney at Bou Chaaya Law Firm who specializes in real estate litigation, and is unconnected to the project or related lawsuits, contradicts this view. Looking over Tabet’s report, he says that a new EIA would have been required, and that regardless the old EIA had expired before construction began. For this reason, the environment ministry filed a lawsuit against Eden Bay on May 5, based in part on information provided by Nahnoo.

On November 28, 2016, the Green Line Association, an environmental-advocacy organization, initiated another lawsuit that contested the building permit held by Eden Bay sal, which the group suspected was intruding on public property. Green Line Association, represented by Legal Agenda, is also challenging the Municipality of Beirut and the Lebanese Government over the project.

On February 8, 2017, the State Council ordered a construction freeze on the resort in response to the Green Line Association’s lawsuit, until the legality of the development could be determined. According to Karame, Eden Bay continued building nonetheless, even when a second stop order was issued by the council on March 6, 2017.

She says that Eden Bay cited multiple technicalities to avoid complying with the council’s decision. For example, Karame says that Achour argued the building permit that Green Line Association was contesting no longer affected it as the company had filed for a modification permit that amended their original. Although modifications are not technically considered separate construction permits, the Council issued another order to halt the building on March 6, 2017. This too had little effect, says Karame.

Legal Agenda then asked Jad Maalouf, a judge of urgent matters, to oblige the construction company to halt its activities under threat of a $100,000 fine for each day that work continued. By March 18, the order was in place, and Karame says Achour stopped contruction soon afer.

Meanwhile, the council required the Municipality of Beirut to hand over Eden Bay’s building permit and related application material. The information garnered from this disclosure largely contributed to exposing the violations alleged in Tabet’s report, which he compiled at the request of President Michel Aoun and Minister of State for Combating Corruption Nicolas Tueni.

The Green Line Association’s lawsuit is still awaiting a final ruling from the State Council. Karame explains that Legal Agenda submitted Tabet’s report to the court, but one of the council members decided to appoint their own experts to investigate the hotel. She says that so far, the appointees have been unable to conduct site visits because Achour’s attorney claims that the company was not notified and the state maintains that it has not yet selected a lawyer to attend these visits. 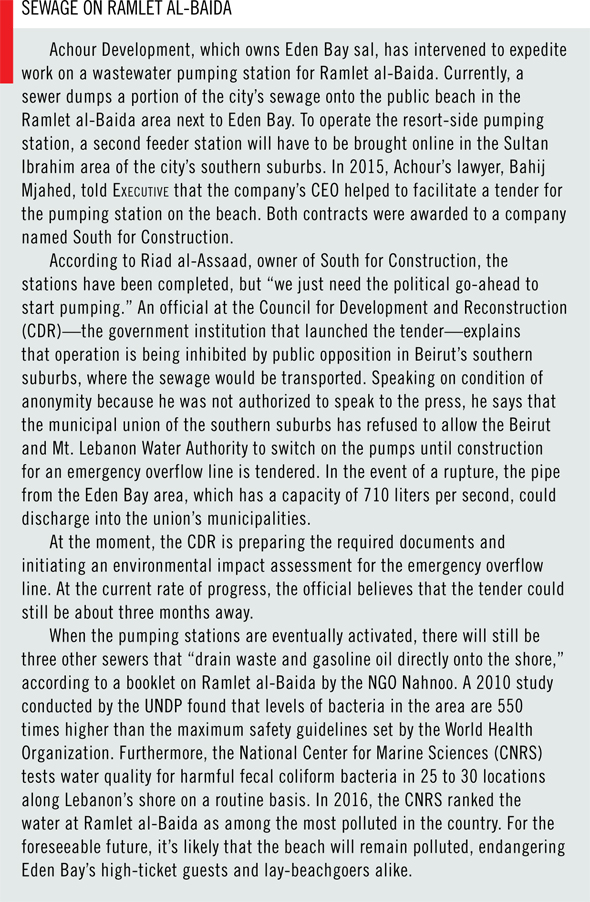 Media reports on Eden Bay have also been restricted based on orders from a judge of urgent matters who barred two TV stations from disparaging the company.

All sides of the Eden Bay controversy have been reluctant to provide interviews for this article. Only the lawyer from Achour agreed to speak, on the condition he was not recorded. The municipality was unresponsive and an official at the DGUP was unavailable. For his part, Tabet told Executive he had no further comment at this time.

Who holds the reins?

Executive asked Mjahed to respond to the charges presented in the report. He stated that the only authorities that can evaluate whether the company’s actions were legitimate are the Beirut municipality—which approved the necessary permits—and the judiciary, which ultimately allowed construction to proceed. Mjahed dismissed the accusations of violations as a “fantasy,” saying that it is impossible that all the relevant Lebanese agencies are allied in a “conspiracy” with Eden Bay.

Meanwhile, Eden Bay draws closer to opening. One Achour employee, during a request to be interviewed, put the opening as soon as early April. At the time of this writing, Achour had not announced whether an inhabitance permit, which certifies a building’s completion and enables its occupation, had been issued. The delivery of the permit, if granted, may represent both the finalization of the hotel and yet another regulatory violation, says BouAoun. “When you [apply for] the inhabitance permit, [the municipality has] to verify that what you realized conforms to what you got a  permit for. [Eden Bay] didn’t abide by its permit, so of course, the inhabitance permit is not legal,” she says.

Haddad, the unaffiliated attorney, says the violations outlined in Tabet’s report are clear, and that they are common throughout the market. With construction of the first major real estate project on Beirut’s last public beach nearly complete, the question is not only how many Eden Bays are out there, but how many more there will be.