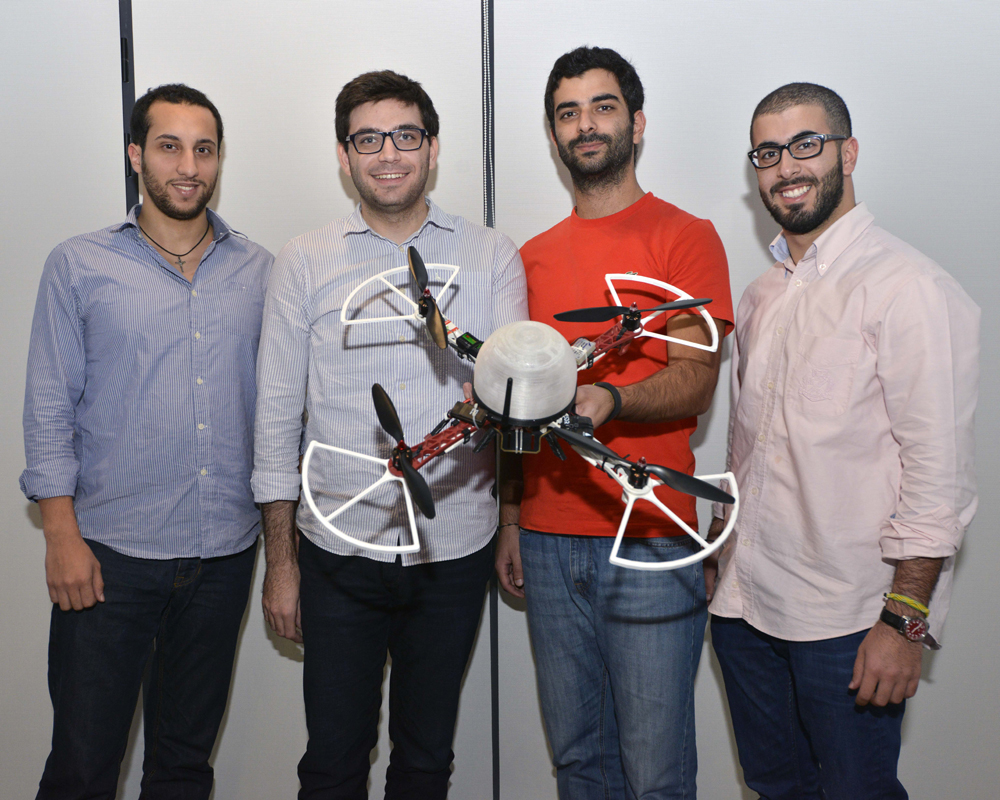 This company is part of Executive’s Top 20 for 2015. Read more stories from our entrepreneurship in Lebanon section, for the latest analysis on the country’s ecosystem.

The drone industry is growing and is fast becoming an indispensible part of a large range of consumer services. Analysts are predicting the sky as the limit for the industry over the next few years, with 2014 seeing drone startups raising $107 million worldwide, surpassed in June 2015 with $172 million, according to data from CB Insights, a venture capital and angel investment database centered in New York. With Amazon’s ‘Prime Air’ drone-based delivery system currently in development, and local street festivals such as Car Free day in Mar Mikhael on November 22 filmed by flying drones, drone usage is on the rise.

What started as a final year university project at the Lebanese American University in Byblos in August 2014 has evolved into Next Automated Robots (NAR), a startup in Speed’s acceleration program that is working to produce a fully-autonomous 24/7 drone called “QuadroFighter”. The aim of the drone is to detect wildfires at an early stage, and target markets are governments and private NGOs, or individuals cultivating wide areas of land. The drone alerts the user through desktop or mobile applications, without piloting, and relays the coordinates of the wildfire. The user interface is being developed by NAR and a demo is scheduled for presentation to investors in mid January 2016.

While the company is still very much in the early stages, and is prioritizing the research and development into flight times, the co-founders point to the wide array of practical applicationof the project. They argue that NAR can evolve beyond detection of wildfires. “As soon as we have the platform we can shift [drone usage] to any other thing that can be beneficial to society,” explains co-founder Charlie Khoury, “[for example] industries like oil and gas and agricultural industries,” where inspections can be carried out by drones. Revenues and operating costs are still under discussion within the acceleration program, as NAR is currently heavily focussed on research and development.

Their only hesitation is the availability of parts, with no company supplying motors, controllers and batteries within Lebanon, thereby pushing NAR to source these components from outside the country. They are, however, keen to ensure their operating base remains within the country, and have expressed interest in opening a regional office to source parts. Khoury emphasizes that this technology is new to Lebanon, and within the market in the country there is enormous potential for NAR to grow, both nationally and regionally. Additionally, while their early detection of wildfires can have a positive environmental impact, NAR’s social impact can be seen through their potential recruitment – upon expansion – of local engineers and designers. As four respective engineers who graduated in classes that saw many of their peers move outside of Lebanon for employment, NAR is keen to emphasize how a new industry can incentivize young engineers to stay working in Lebanon through offering exciting opportunities in a fresh industry. Their focus, to integrate drones into everyday life, is the main persuasion tactic they will use on demo day to investors when they seek future funding.