Potential is the most important word to keep in mind when thinking about a future Lebanese oil and gas industry. In November (provided there’s a functioning government at the time), the country is scheduled to begin offshore exploration, which could provide a revenue stream flowing decades into the future and kickstart a local industry services sector. Fifty-one mostly foreign companies have pre-qualified to get in on the action (see list below), and despite  weaker prices per barrel than Big Oil would like, there is clearly appetite for investment in east Mediterranean acreage – industry slang meaning, in this case, drilling and production rights in blocks of a country’s Exclusive Economic Zone (EEZ). Evidence, from both drilling in the neighborhood and abundant subsea survey data covering nearly all of offshore Lebanon, suggests there could be good news in the country’s near future. That said, detailed predictions about what to expect (which companies will bid to win a contract, how much gas or oil will be found, how much it will be worth) remain as useless today as they have been previously. What is undeniable, however, is that Lebanon’s slice of the gas-rich East Med is on radars near and far.

Some four years behind schedule, in September Lebanon will accept bids from oil and gas companies keen to explore its offshore. The rules say each bid must come from a consortium of prequalified companies (one operator, the company actually overseeing the complicated work of drilling hundreds of meters into the seabed, and at least two non-operators). Bids will be based on a model exploration and production sharing contract with a potential lifespan stretching more than 30 years. Certain technical and financial provisions in these contracts have been left undefined, and filling in these blanks is the heart of the bidding process.

The financial offer is the more important of the two in terms of bid evaluation (i.e., on a 100-point scale, it is worth 70 points). Lebanon’s plan for an oil and gas fiscal system (i.e., how the state captures rent from potential resources) has been loudly maligned, but not very well understood. There are certain fixed revenue mechanisms in the contracts, the most talked-about being a 4 percent royalty on natural gas, and a sliding royalty on oil ranging from 5 to 12 percent, based on volumes. Were these royalties Lebanon’s only straw for syphoning revenues from the sector, they would be laughably low, and the critics of this one component of the overall fiscal system would be correct to complain. However, royalties are only part of the story. In addition to paying Lebanon’s corporate income tax (currently set at 15 percent but expected to rise to 20 should Parliament approve a long-promised new oil and gas tax law), companies will bid on the parameters of further revenue sharing with the state based on the volumes of resources (if any) found. The details are complicated (and covered by Executive in the past), but in essence, no matter what exact numbers companies put in their bids, if enough oil and/or gas is found to justify extracting it, the state will begin sharing profits from resource sales immediately, with the state’s share growing over time. Not every country uses the same model, but it is common and – as a system – perfectly capable of maximizing the state’s take from the sector. This is all to say that there’s no way to predict what revenues Lebanon can expect at this point, but the system in place has been proven in other markets and attacks against it are likely to be driven by alterior motives.

The technical bids are arguably more exciting. Evidence from both drilling in the neighborhood and abundant subsea survey data, which today covers nearly all of offshore Lebanon, suggests there could be good news in the country’s near future – and that is not hyperbole. The aforementioned delay, abundant data and regional evidence have pushed Lebanon to be more ambitious than one would expect of a country that has never drilled an offshore well (a frontier area, in industry parlance). If contracts are signed in November, winners will be committed to drilling at least one well (if not more) in the first three years (as opposed to after 7-10 years, which can be the case in other frontier areas). What many people fail to realize is the value drilling offers in terms of useful information that itself can be of greater value in the future. For all the large natural gas discoveries nearby and talk about Lebanon’s potential, we actually know nothing about Lebanon’s offshore. Absolutely nothing. Drilling will change that, even if no discoveries are made. One arguably learns as much from “failure” (a dry well) as from success. The truth is out there, and the first real answers on Lebanon’s potential will come relatively quickly after contracts are signed.

Slow and steady wins the race

Oil and gas is a long game. The contracts Lebanon hopes to sign soon will last more than 30 years, provided a discovery is made (if companies do not find anything in Lebanon’s offshore, the sector could well be very short-lived, although all available indications suggest this will not be the case). A big discovery will no doubt intensify interest in Lebanon’s offshore in the same way large gas fields in Israeli, Egyptian and (to a lesser extent) Cypriot waters make the whole East Med an exciting exploration area. With this in mind, the Lebanese Petroleum Administration (LPA), the sector’s not fully independent regulator, pushed long and hard for gradual licensing (i.e., offering chunks of offshore acreage over time instead of signing contracts covering the entire offshore all at once). From a strategic point of view, gradual licensing allows Lebanon to leverage knowledge gained from drilling to get better terms in the future and also potentially expand the timeframe over which revenues from the sector pour into state coffers. At one point in the past four years, some politicians were against gradual licensing. Ultimately, however, the LPA won. Of the 10 blocks into which Lebanon’s offshore is divided, five are on offer in the first round, with no obligation for how many contracts the government must sign.

If the deadline is respected, Lebanon will be doing more than signing contracts in November; it will be establishing a potentially valuable new sector. However, even if all goes as well as possible, oil and gas will not transform Lebanon’s economy. In the first few years, most Lebanese likely will not notice a difference. Even 30 years from now, if Lebanon is a regional gas powerhouse, the oil and gas sector will not be an economic pillar the way banking and tourism are. While there will be direct job creation, exact numbers are hard to predict, but thousands and thousands of jobs is an unrealistic expectation. The industry will need services (from housing and transportation to catering and local legal advice), and many local companies may find new opportunities, but again, not in a volume to actually re-configure the economy. In fact, one risk the LPA is actively trying to avoid is known as Dutch Disease, or the rapid refocus of an economy on one sector to the detriment of all others.

As noted, it is far too early to guess what revenues Lebanon can expect from potential oil and/or gas finds. It is also a bit too early to say for certain how those potential revenues will be managed. A 2010 law governing offshore exploration and production calls for all state earnings to be deposited in a sovereign wealth fund. The law gives the fund a dual, and potentially contradictory, mandate: save some, spend some. Writing a separate law fleshing out the sovereign wealth fund will function as the sector’s next political priority after contracts are signed. The success of drilling will determine just how quickly the sovereign wealth law needs to be written. 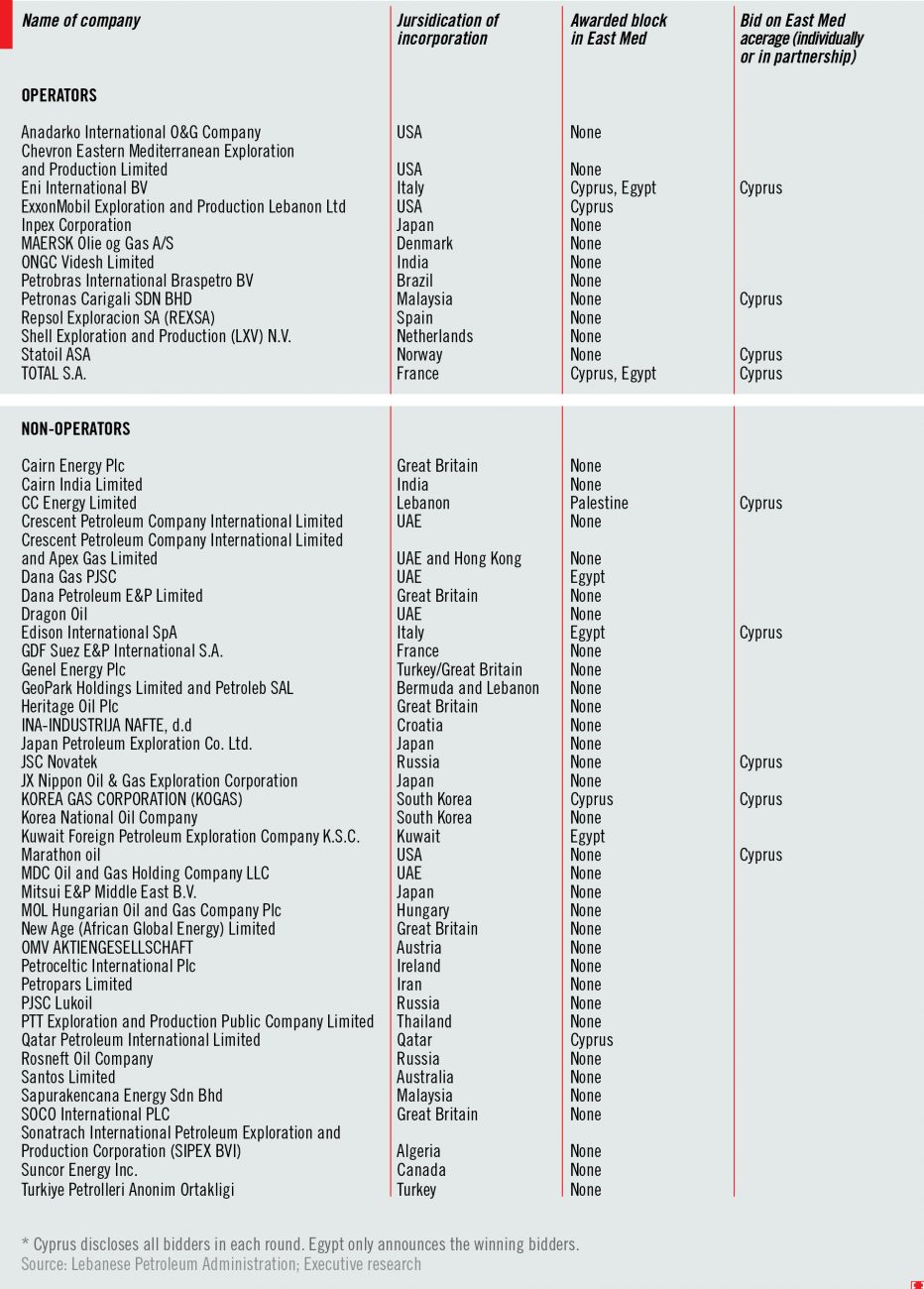 Geology has nothing to do with geography. If Lebanon did not drill yet any well, its neighbors did drill and huge discoveries were made.