The transition from April to May saw Arab markets step back from their previous momentum. The indices for eight of the twelve security exchanges in the Middle East and North Africa recorded lower performance when compared with the previous week. 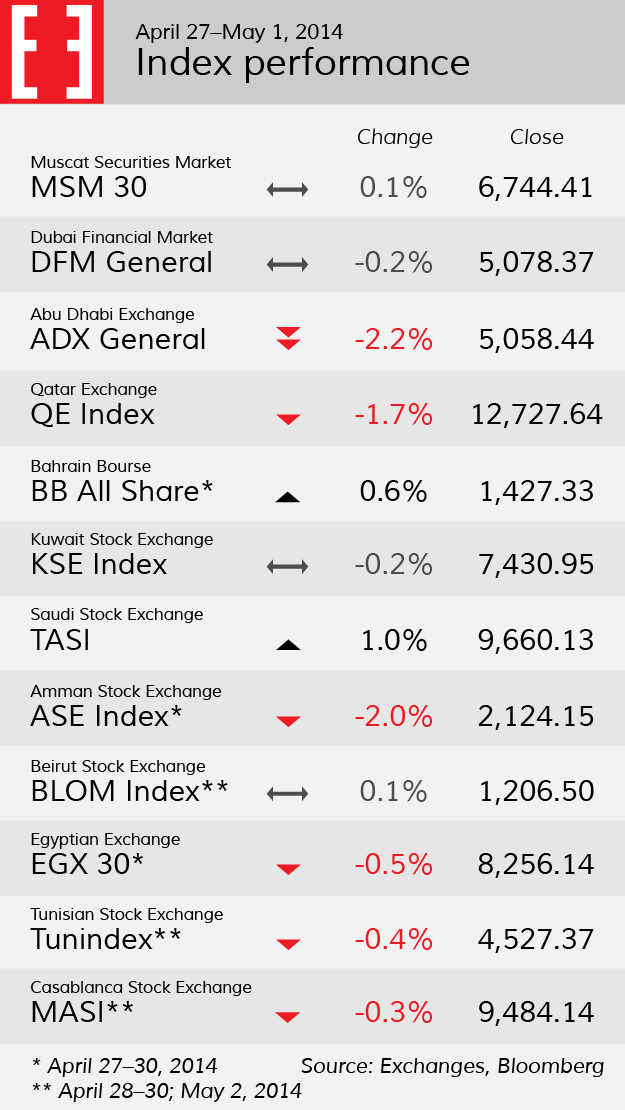 In terms of net weekly changes, two markets — Saudi Arabia’s Tadawul and Bahrain Bourse — were up; four markets were flat; and six dropped. Jordan’s ASE index, down by nearly 2 percent, and Abu Dhabi’s ADX, down by 2.2 percent, were the weakest performers. The Dubai Financial Market cooled visibly to a performance of minus 0.2 percent after its 6.9 percent gain last week. The Qatar Exchange switched from being the previous week’s second-best gainer to falling 1.7 percent and the Egyptian Exchange also stumbled from substantial gains to a weekly loss.

The Moroccan and Lebanese bourses showed small positive changes in their index movements. The MASI’s drop rate narrowed by 0.1 percentage point while the BLOM Index went from a minimal negative in week 17 to minimal positive in week 18.

Only the Omani and Saudi exchanges displayed clear upward energy. When compared with week 17, the Muscat Securities Market’s MSM30 narrowed its drop rate by 0.9 percentage points and ended week 18 practically flat while Tadawul’s TASI widened its gain by 0.7 percentage points for a 1 percent index gain. This made the TASI the top riser in MENA for the week.

The Bahrain Bourse Index, although gaining, advanced at a much slower speed than in the previous week. The Tunisian Stock Exchange’s Tunindex ended April sliding further in the downward trend that started in March. The index did, however, edge up on the first trading day in May.

The Amman Stock Exchange saw its index drop to the lowest reading since the first week of January but recovered slightly on April 30 before going into a long Labor Day weekend.

Movements of Lebanese equities were unremarkable. But curiously, although the Beirut Stock Exchange’s BLOM Index last week touched its lowest point since the resolution of the protracted government crisis in February, this weakening was reversed during the two sessions on April 30 and May 2 after it was actually confirmed that, as expected, no quorum for a vote on the presidency was reached in Parliament, just three blocks walk from the BSE.

While Arab markets were subdued in their index movements last week, pundits in international markets engaged in continuing debate over the fate of the current bull market in developed economies and the outlooks for the largest emerging markets. Their views being sharply divergent, bulls and bears appear about equally able to find followers. Main pro-bull theses include that only a recession will kill the bull and that no signs of such a recession are present; pro-bear theorists started May by pointing to the current high upside gap between core developed market indices and their long-term moving averages.

A single assessment where analysts are largely in agreement is that the Russian equities market, which has fallen more than 13 percent between the start of 2014 and the end of April, is set to drop further due to the country’s political course, and there is a broad assumption that the political crisis over Ukraine will reflect on emerging market equities.

In the view of many analysts, further risk elements for emerging market equities loom in the United States Federal Reserve’s determination to wind down its bond-buying support for the US economy. Both of these risks are seen as important for the top tier of emerging economies, such as China, India and Brazil, and the second tier emerging markets such as Mexico, Turkey, Indonesia and Nigeria.

On the other hand, correlations between fluctuations in developed markets and frontier markets are low, which gives some international retail investors an argument for diversification into frontier markets. Opponents of the concept point to the these markets’ comparatively low levels of liquidity and political risk factors as deterrents.

When viewed in the context of varied concerns over developed and emerging markets, Arab markets appear insulated from both global financial and political concerns for the time being.

In terms of index performances, MENA markets are all positive for the first four months of the year. At the end of week 18, the benchmark indices of the Kuwaiti, Omani, Moroccan, and Tunisian bourses were up between 1 and 5 percent. The index gains of the two Levantine exchanges were in the 5 to 10 percent range. The performances then stagger from the Tadawul’s 15 percent gain and Bourse Bahrain’s 19 percent to 21 percent for the ADX General Index; 23 percent for the EGX30; 28 percent for the QE Index; and finally almost 54 percent for the DFM General Index. Overall, it is a performance spanning everything from marginal or modest growth to strong and almost unrealistically large gains.