The Arabtec fiasco has embarrassed Dubai, and threatens to wipe out the DFM’s gains from the first half of 2014

The final trading week in June demonstrated that markets in the Middle East and North Africa are neither highly resilient nor diversified, despite having greatly advanced since the region’s 2008 immersion into the Great Recession. The best gainer of all MENA stock markets in the 26th week of the year was Kuwait’s KSE Index, which advanced all of 0.6 percent, followed by a 0.4 upward nudge in Oman’s MSM 30. 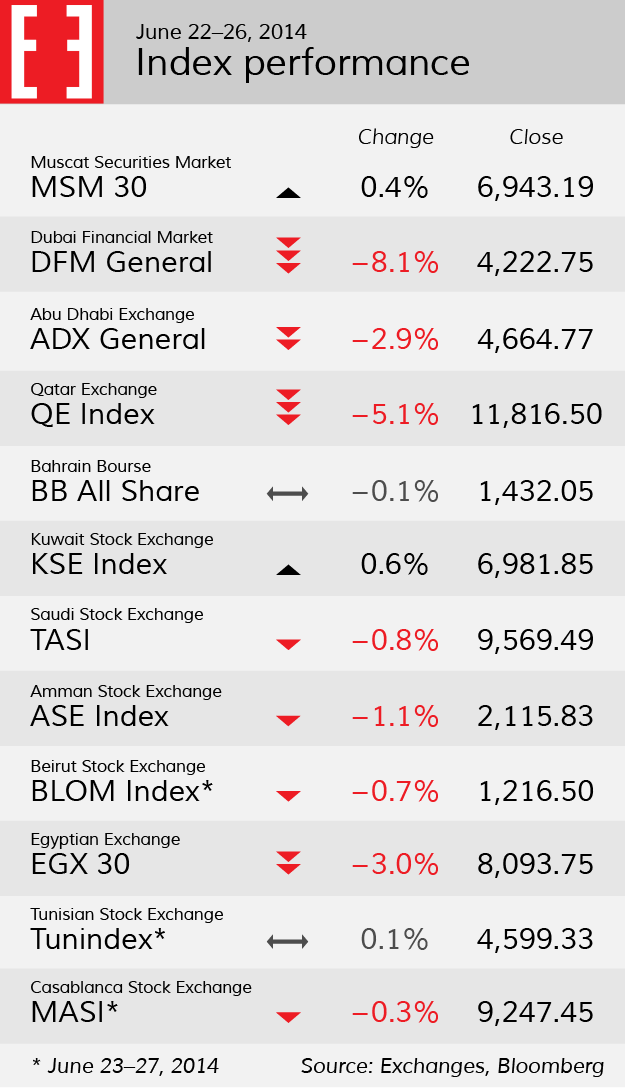 Across the region, the last trading week before the start of Ramadan was a reminder that equity plays are absolutely no guarantors of rewards in life. From Doha to Casablanca, market investors had to contend with a second consecutive week of index impairments, but for participants in the Dubai Financial Market this remainder struck home in form of a big bad bang as the DFM General Index not only dropped 8.1 percent on the week but also closed the second quarter below 4,000 points on June 30.

In continuing the index losses of the two previous weeks, this meant that the DFM GI closed the second quarter 11.4 percent lower than its value at the end of March, signifying the index’s first harsh quarterly drop since getting on a speedy growth train in the middle of 2012.

In the half-year statistics, Dubai thus dropped to second best climber behind the Egyptian Exchange, whose EGX 30 index ended the first six months in 2014 with a 22.1 percent gain, 2.5 percentage points ahead of the DFM GI. Most other MENA markets ended the period also with gains, with other high risers being Bahrain with 19.4 percent, Qatar with 15.5 percent and Saudi Tadawul with 13.1 percent. At the low end, the Tunisian and Moroccan bourses advanced 5.7 and 4.4 percent. Only the Kuwaiti bourse closed H1 lower, by 4.2 percent when compared with the start of 2014.

For reference, the data pages of index maker MSCI said that its Emerging Markets Index achieved a first-half gain of 4.8 percent in terms of price, while the combined performance of Emerging and Frontier Markets stood at 5.3 percent.

But even as the regional statistics for the year to date are still impressive in the context of emerging and frontier markets, the recent drop of the DFM GI was as painful as it was embarrassing.

Painful, because the story of the sharp correction in the DFM last month was a reminder that the UAE equities narrative in 2014 is, despite Abu Dhabi’s oil, Dubai’s trade and the UAE’s overall financial wealth, first and foremost about real estate development, just as it was in 2008 and the years before. The market is short on diversification and its up and downside risks have been and still remain tied to property values.

In that sense, the extreme — and in hindsight misplaced — trust in Arabtec, the construction and development holding whose stock triggered the slide in Dubai and even affected other Gulf markets, is almost a necessary aspect of the equities hype that was produced by the resurgence of real estate sales in a narrow development sphere focused on Dubai and Abu Dhabi.

Arabtec was trumpeting its determination to expand to larger scopes and prove itself as a world-level contractor and developer with projects from St. Petersburg, where it signed as a contractor on Europe’s tallest building, to Cairo, where its development unit was signed to erect one million low income homes.

But the UAE was the base where Arabtec had radiated success in executing projects such as the Burj Khalifa, and the marketplace where it had shown off pricey new projects, announced as worth $3.8 billion, as recently as April. The UAE was also the space where Abu Dhabi’s state owned investment fund Aabar was a key stakeholder in Arabtec, while at the same time responsible for awarding Arabtec’s new properties unit with developing a major project in Abu Dhabi.

It took only a minor partial divestment by the state owned fund to trigger the selling frenzy that would reveal the fragility of valuation assumptions that regarded Arabtec as the autonomous producer of its success. All recent signs suggest that the Aabar shareholding — and not Arabtec’s competency — was perceived by the market as the guarantor that the firm could obtain business in local luxury projects where the state, personified by its rulers, is habitually credited as the maker of all big things.

In another sense, the case is hugely embarrassing for anyone who believes that the region’s stock markets are supervised in ways that protect small retail buyers. The governance systems, including supervisory agencies, banks, financial institutions, equities analysts, stock market reporters and regional business media, all failed to voice timely warnings.

Governance stakeholders should alert market participants to unusual developments such as important share trades in a listed company by any executive of that company. Not only did that not happen, but apparently neither did the system stop brokers from enticing clients to buy shares with borrowed money beyond the levels regulators had set as acceptable.

While the Dubai market and its brethren in Abu Dhabi and Qatar were blooming, analysts and those of us in the local and regional media were too busy cheering and did not pay enough attention to the risks — neglecting to share the knowledge of past regional experience that trades in equities are no recipe for risk-free redistribution of wealth.

Lessons of misplaced trust are a universal and recurrent feature of the securities markets experience. All indications are that this latest lesson is still ongoing and will linger for an indeterminable amount of time in the Gulf markets. As the DFM fell by more than 20 percent between May 6 and June 23, some news reports claimed the index had crossed into a bear market.

This description is contestable: by most definitions, a bear market entails a 20 percent downturn over at least two months. This notwithstanding, the developments of week 26 — including the continued panic selling of Arabtec stock and other selling allegedly forced by margin calls — lend themselves to taking a bearish perspective for weeks to come.

This would eventually shape into a full-fledged bear market — unless the counter-expectation of a market stabilization on basis of economic fundamentals bears out. When pondering strategic responses to either possibility, market participants may benefit from expanding their perspective to a broader consideration of emerging markets and markets in general.

When compared with the first quarter in 2014, the overall performance of emerging markets in the second quarter was encouraging. Although advancing unevenly, the bourses of numerous emerging markets achieved gains in the year to date and specifically, some of the large markets that dipped in Q1 showed improved performances in Q2.

Mexico and South Africa both had stronger, single digit growth in the second quarter when compared with the first. Malaysia’s benchmark index in Kuala Lumpur advanced 1.7 percent in Q2 and closed the first half up 2.4 percent, year to date. The rising economic behemoth China, home to many of the most watched emerging market stocks, saw the Shanghai Composite Index rise 0.7 percent in the second quarter, putting the market at a year-to-date drop of 1.5 percent by June 30.

During the same period, performances recovered in two important equities markets, Brazil and Turkey. Prime Minister Recep Tayyip Erdoğan’s Turkey recovered currency with markets after his AK Party won municipal elections on March 30. The BIST 100 index of the Borsa İstanbul gained 12.6 percent in the second quarter, departing from a morose first quarter that managed a net gain only it its last week of trading. In São Paulo, which had a lousy first quarter and lost about 13 percent until a turning point in mid March, the Bovespa Index advanced 5.5 percent in Q2.

Political hopes were instrumental in the advance of India’s SENSEX by 13.5 percent in Q2. This was more than double the first quarter’s percentage rate of growth, but the Indian market took off only after results of the country’s month-long parliamentary elections were clocked in early May. Contrary to some expectations, Moscow’s MICEX moved up despite the volatility related to the Ukraine crisis, adding 6.7 percent in Q2.

The country stories from all around the developing world are also reflected in this year’s performance of the MSCI Emerging Markets index, where a downtrend from 2013 carried over into January 2014. A recovery consumed the rest of the first quarter, and the index continued to improve from there. In the long term picture over the past four years, the emerging markets have been rather volatile and subdued in their growth when compared with developed markets.

At the same time, the recent performance of global financial markets and the global economy is no reason for complacency about the financial system, warned the Bank for International Settlements (BIS) in its Annual Report on June 29.

The Basel-based international financial institution that serves as bank to central banks and provides them with policy research said, “The overall impression is that the global economy is healing but remains unbalanced. Growth has picked up, but long-term prospects are not that bright. Financial markets are euphoric, but progress in strengthening banks’ balance sheets has been uneven and private debt keeps growing. Macroeconomic policy has little room for [maneuvers] to deal with any untoward surprises that might be sprung, including a normal recession.”

In order to avoid an entrenchment of risk in the global economy and loss of maneuvering room on policy, BIS said it is necessary to dampen the extremes of the financial cycle via “improvements in policy frameworks — fiscal, monetary and prudential — to ensure a more symmetrical response across booms and busts.”

But, as the BIS report added, “Few are ready to curb financial booms that make everyone feel illusively richer.”

The most powerful Lebanese person alive