Dubai leads the pack ahead of MSCI upgrade

With the E-day of transfer to MSCI Emerging Markets status now less than a month away, the three soon-to-be-upgraded bourses of Dubai, Doha, and Abu Dhabi each moved in a different way in week 19. The Dubai Financial Market leapt out of a flat week 18 to a 300-point rise that took it to a six-year high by market close Tuesday. It ended the week only slightly lower than that peak, with a net weekly gain of 4.4 percent. The Qatar Exchange, which dropped the previous week, recouped lost territory with a 1.8 percent climb, but then ended the week below the 13,000 points line that it had breached on Monday and Tuesday. The ADX Index on the other hand dropped another 0.4 percent, continuing its retreat of week 18. 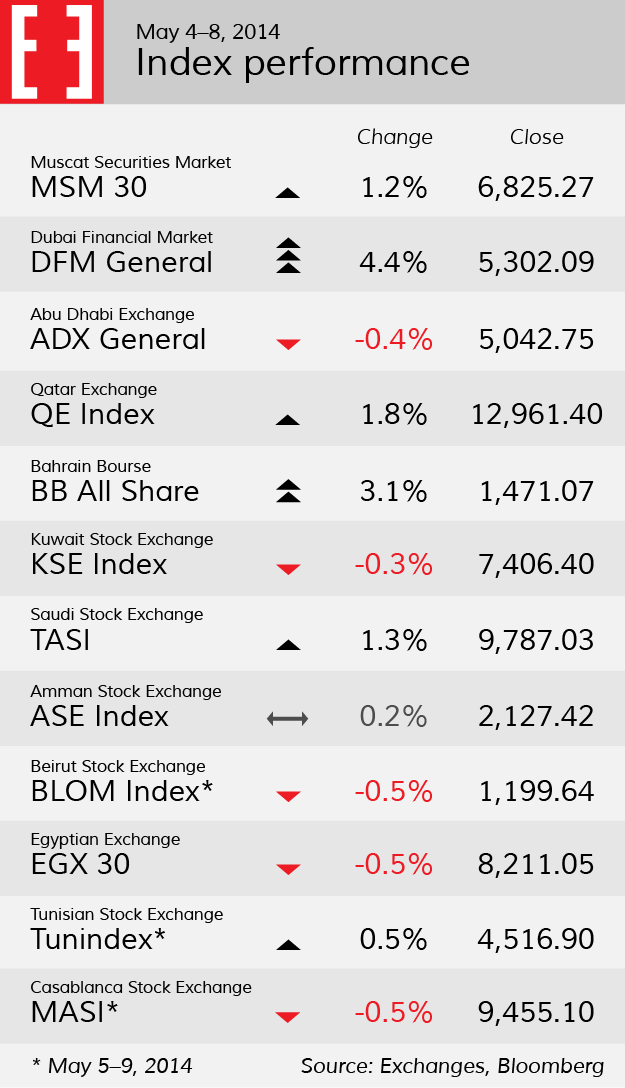 As the announcement of companies chosen by MSCI for inclusion in the Emerging Markets Index is slated for May 14, many eyes zoomed onto the real estate and banking shares in the running. Interest in Emaar Properties, one of the contenders, drove the stock up to a six-year peak on May 5. The share price receded slightly at the end of week 19, but interest in Emaar looked likely to get another boost as a report in The National newspaper said that Dubai regulators would adjust requirements to enable Emaar to undertake the initial public offering of its malls unit in June entirely on the DFM and not, as previously planned, spread the listing across DFM, Nasdaq Dubai and the London Stock Exchange.

Dubai stocks certainly do not look like bargain material after having risen more than 60 percent year-to-date according to Bloomberg. Perhaps the best example of an outlier is construction group Arabtec, whose share price last week was described as “looking expensive” by local analyst Shuaa Capital after more than tripling thus far in 2014. However, the attractiveness of DFM-listed stocks may still be able to feed on continued optimism as Dubai’s Department for Economic Development (DED) reported that the business confidence index rose 20 percent in the first quarter of 2014. Based on the long-term business prospects tied to the 2020 World Expo, large companies were the most confident, according to the DED.

The Saudi bourse, mightier and not concerned with the MSCI, saw the TASI extend its gain for a second week. This made Tadawul the week’s third Arab exchange besides Qatar and Dubai to report a multi-year index high. Now in a six week uptrend, the Bahrain Bourse is again edging closer to 1,500 points, a level last seen four years ago.

The Muscat Securities Market adjusted to the enthusiasm of the other exchanges in the Gulf Cooperation Council and rose 1.2 percent, marking its best weekly gain since falling below the 7,000-points line some eight weeks ago.

Rising tides did not lift all boats, however — the KSE Index fell 0.3 percent. Assessing trends in the Kuwaiti economy, the country’s largest bank, National Bank of Kuwait, last week reported that “real estate as asset class” has been a focus of activity, attributing an 18 percent increase in 2013 property sales to a record $13.1 billion partly to the softness in the equity market. The NBK analysts expect the country to see steady non-oil growth of 4 to 5 percent in 2014 and 2015 and added that the economy “could start to gather considerable momentum sometime in 2015,” contingent on government measures for economic reforms and implementation of infrastructure projects, which are both overdue.

Small change for the rest

In the Levant and North Africa, losers outnumbered gainers three to two, with all weekly index movements staying in the 0.5 percent range. The Beirut Stock Exchange dropped half a percent and the BLOM Index entered the weekend below 1,200 points for the first time since the Salam cabinet took office in early February. The Amman Stock Index did better than in week 18 but never fluctuated more than one percentage point throughout the week; its 0.2 percent net gain was in flat territory.

The MASI in Casablanca gave up half a percent between market opening on May 5 and the close of the week on May 9. The Tunindex of the Tunisian bourse on the other hand advanced half a percent in the same period, making its minute gain the best performance in the Levant and North Africa for the week.

Egypt, North Africa’s center of popular mass, saw its benchmark index fall 0.5 percent. As the country appears set to return into the political embrace of its pre-uprising reality, the primary market last week received its first IPO prospectus since 2010. According to Reuters, it is a flotation seeking $120 million and the measure is being undertaken — perhaps fittingly — by a heavy industry materials producer, the Arabian Cement Co.

Open the doors of Parliament