Three benchmark indices got a welcomed reprieve from selloffs, leading Arab markets in the 27th week of the year. The Dubai Financial Market — home of the Arabtec scandal that triggered a pummelling of markets over the previous weeks — saw its benchmark index advance 4.2 percent amid trading volumes of more than 1 billion shares in three sessions, far above its 50-day average. 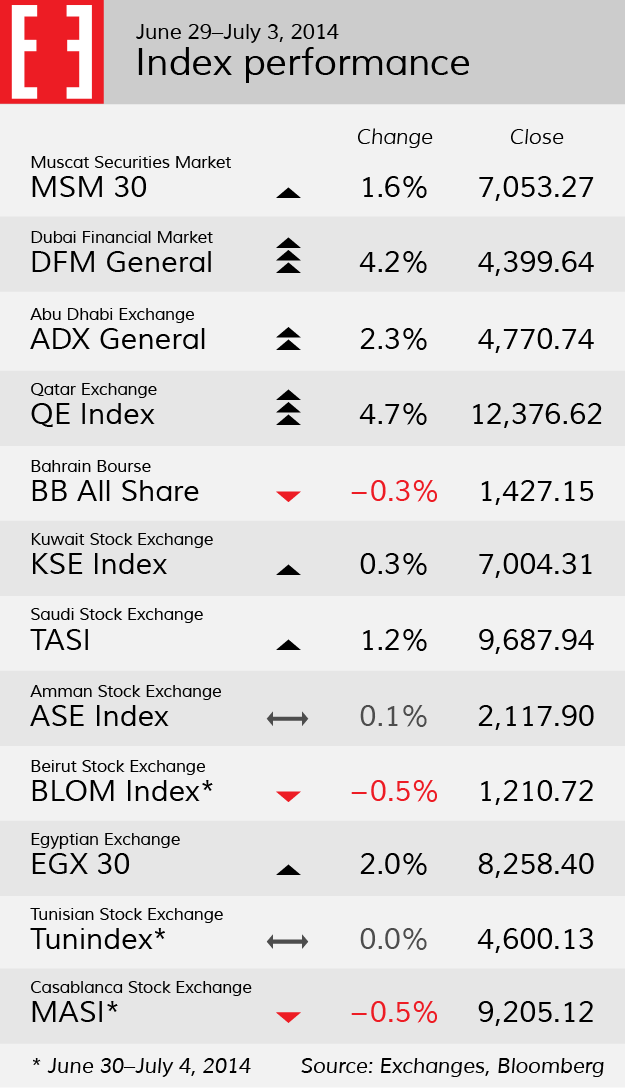 On the Qatar Exchange, the index gain was even higher at 4.7 percent and in Abu Dhabi, the uptrend was 2.3 percent. Both exchanges saw higher volumes on the first three days of July when compared with daily volumes in the previous two weeks.

Other markets in the Middle East and North Africa displayed index fluctuations of lesser intensity but with a preponderance of gains; the only drops, at 0.3, 0.5 and 0.5 percent, were registered in Bahrain, Beirut and Morocco.

Dubai closed the week marginally better than 20 percent down from its May 14 peak, allowing definition purists a new round of debate whether the recent downturn constitutes a bear market. Arabtec, whose board ventured to reassure investors and observers in a rare press conference on July 2, recovered at least somewhat from the onslaught of doubts that had almost erased the stock’s year-to-date price gains by its June 30 close. While still deeply wounded and having much trust yet to restore, the company showed a net weekly gain of 13.5 percent in the week.

In mature stock exchanges, when the going gets tough, the tough — meaning informed investors with enough cash on hand and a contrarian strategy — tend to go shopping. In the Dubai setting, the maxim seems to read a bit differently: when trust is in doubt, announce a mall. The latest big news aiming to boost trust in the emirate was an elaboration of the Mall of the World project in the Mohammed Bin Rashid Al Maktoum City megaproject, named after Dubai’s ruler and majority shareholder in the Dubai Holding company that owns the mall project.

According to a July 5 press statement by Dubai Holding, the new mall will be the world’s largest, at 8 million square feet (743,000 square meters) but that is not the big news. The mall will be embedded into “the world’s first temperature-controlled city,” the announcement said. This 4.5 million square meter project will be located along Sheikh Zayed Road in Dubai. Temperature control will apparently be achieved via a protective cover, namely “a glass dome that will be open during the winter months.” Cost and implementation timeline of the venture were not included in the statement.

It was not all malls that spelled potential for new market boosts in the region, though. Tadawul, the Saudi bourse, saw the TASI climb 1.2 percent — perhaps with a whiff of optimism from neighbor markets but entirely without a new entry into the books for breaking new construction records. Toward the end of the week, the Saudi market was invigorated by second quarter results news, highlighted by petrochemicals giant Saudi Basic Industries Co’s (SABIC) dividend announcement of SAR 2.5 ($0.67) per share for the first half in 2013 that represented an increase of SAR 0.5 from the same period in 2013. Other better-than-anticipated results for the second quarter came from Saudi Hollandi Bank, Riyad Bank and dairy producer Almarai after the week’s market close.

In the region’s most populous country, Egypt, week 27 brought a couple of upward sessions to the Egyptian Exchange after the government announced an austerity budget containing what was described as a planned deficit equal to 10 percent of GDP for the new fiscal year 2014–15, which started on July 1.

Reuters cited a statement saying that Egypt’s planned deficit would be EGP 240 billion ($33.5 billion) after a reduction from EGP 292 billion ($40.8 billion) in an earlier budget draft that was rejected by President Abdel Fattah al-Sisi. The World Bank estimated Egypt’s GDP was $272 billion in 2013.

The new budget’s EGP 52 billion deficit reduction was to be achieved by a combination of subsidy cuts and higher taxes, some of which were announced during the week. Tax increases include levies on capital gains and stock dividends, along with efforts to tax Egypt-based companies and professionals who incur revenues outside of the country. The bulk of savings, however, is to be realized via lowering of subsidies for diesel fuel and electricity.

Minister of Finance Hani Qadri Demian announced that Egypt aims for annual economic growth rates of 4 to 5.8 percent in the three fiscal years ending in June 2018, up from an expected growth of 3.2 percent in the just-started fiscal year, according to the country’s State Information Service.

Most notable news pertaining to the Beirut Stock Exchange was a reminder that the BSE has been slated for transformation into a joint stock company and gradual privatization under the 2011 Capital Markets Law. This reminder was based on remarks by central bank governor Riad Salameh at a conference in June, but unfortunately came in the form of a haplessly transcribed, non-fact-checked and very carelessly edited interview of BSE vice president Ghaleb Mahmassani by an English-language Beirut daily.

The momentum was building