Modest gains were dominant on Arab exchanges in June’s first week. Index movements in nine of the twelve markets during the week were by less than two percent — except for a renewed hike in the EGX 30 and corrections in Qatar and Abu Dhabi, which were all between three and four percent. Besides Egypt’s 3.1 percent gain, seven markets moved up, but for six of them, the range of advance was between 0.1 and 1 percent. Beirut and Casablanca joined Abu Dhabi and Doha in moving down. 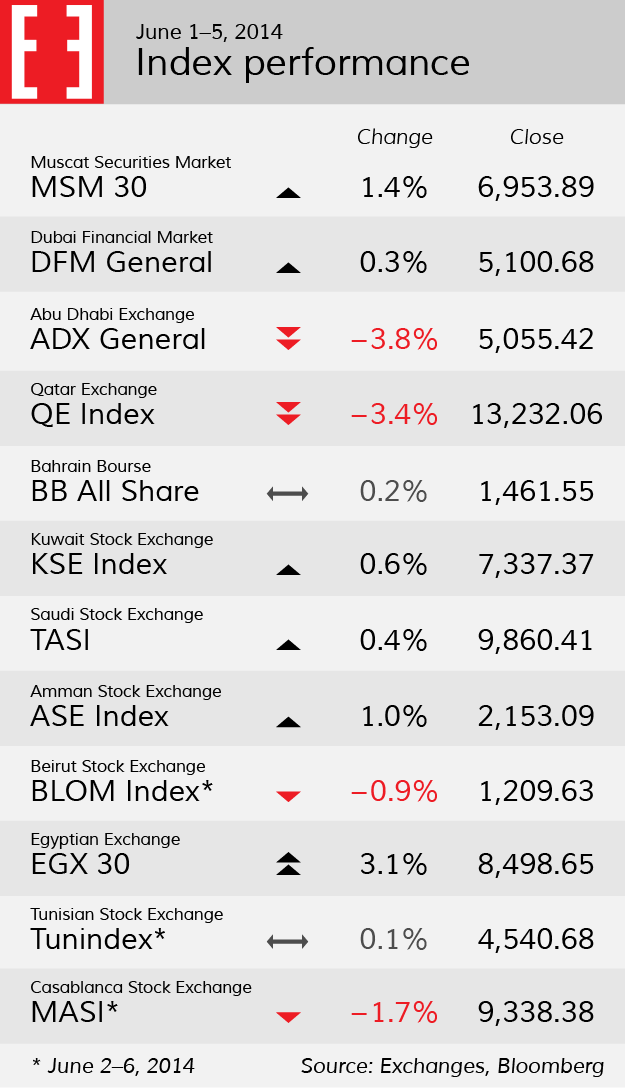 The impact of the transition of the United Arab Emirates and Qatar from frontier to emerging markets status in the MSCI once again — but possibly for the last time for some while — was the most visible driver of index developments in the Gulf Cooperation Council.

The QE General Index closed the week 3.4 percent lower, but when compared with its intraday all-time peak of 13,909 points on May 29, the gauge dropped nearly 5 percent in a week. Abu Dhabi — which closed last month very near to a multi-year record, also achieved intraday on May 29 — fell by almost 4 percent. Dubai, on the other hand, was not quite as ebullient in the last week of May and eked out a 0.3 percent gain.

With MSCI EM-tracking passive funds entering the three markets at the end of May and in the first few days of June, the volumes of trade on all three were significantly above average in the first two to three sessions of the new month, but tapered out toward the end of the trading week. According to reports by two UAE newspapers, Gulf News and The National, local market participation during the week was characterized on one hand by investor caution in the aftermath of recent hyperactive trading, but on the other hand also saw many new and inexperienced day traders come onto the scene in search of wins.

A fourth GCC market that was affected by MSCI’s reshuffle of its Frontier and Emerging Markets index compositions is Kuwait. It remains part of the Frontier Markets index, but the representation of Kuwaiti stocks in the FM Investable Markets Index — which MSCI stated as 16.45 percent in the index’s May 30 factsheet — was set to expand by about six percentage points after the index’s rebalancing due to the reclassification of Qatari and Emirati stocks which had been part of the FM IMI. Reports on GCC markets said that the KSE could see increased funds inflows due to the KSE’s enlarged role in the Frontier Markets indices.

However, impact of the increased MSCI weightings of KSE-listed stocks on their share prices did not jump last week out either in terms of the KSE Index performance or via price changes of the stocks with the highest FM IMI weightings, which according to the May 30 factsheet were National Bank of Kuwait (NBK), telecommunications group Zain and Kuwait Finance House (KFH).

The KSE Index fluctuated by not more than 2 percent and subdued trade volumes on the KSE were in no way comparable to the May 29 and June 1 surges of activity seen in the UAE and Qatar. According to market statistics by Kuwait Financial Center Markaz, the share prices of NBK, Zain and KFH dropped by 1 percent, 1.16 percent and 1.22 percent respectively in the first week of June. Trade volumes of NBK, Zain and Agility, another large cap KSE company in the FM index, were elevated but not radically so. Agility, a logistics company, was the only large cap Kuwaiti company that recorded a substantial price gain in the week, moving up by 4.9 percent.

Overall, local factors such as the perceived lack of transparency, as well as disclosure practices marred by time delays and alleged information leaks seemed to remain much stronger influences on the KSE than the country’s inconclusive position of being a major frontier market.

Saudi Arabia’s Tadawul, the largest securities market in the MENA, progressed to a new post-financial crisis high on June 1. While the TASI closed the week only with a small gain, this further supported the bourse’s overall impression as having a stable upward trajectory. The index action on the Bahrain Bourse was unremarkable for yet another week. The Muscat Securities Market continued a rise that started on May 28 and was the GCC’s strongest gainer in the week.

In the context of market valuations and long-term performances, the Omani and Bahraini markets are positioned having the GCC’s lowest price to earnings ratios at 10.5 and 11.7 respectively at the end of May, according to Markaz. Tadawul is more costly with a P/E ratio of 17.1, but although it has gained 17 percent in the year to date, it is still is almost 11,000 points below its historic pre-crisis peak. Consequently, the TASI has the room to gain almost 110 percent — more than any other GCC market — before it would reach another all time index record.

In the North African markets, the Tunisian Stock Exchange showed some micro-volatility, but the Tunindex moved sideways, closing yet another week of flat performance. The MASI’s performance reflected a week of almost daily drops on the Casablanca Stock Exchange; the market recorded a close below 9,400 points for the first time since the end of February. In the context of the past 12 months, however, the MASI remains on middle ground. With a 3.1 percent gain, the Egyptian market recouped part of the territory lost in the previous, rather volatile election week. Before climbing 150 points on Wednesday, June 4, and more than 380 points on June 5, the EGX 30 had finished two of the week’s sessions below 8,000 points.