In the first century, the name Sidon meant something.

The city is believed by scholars to be the birthplace of glassblowing, and it had a reputation for fine glasswork throughout the Roman Empire. In “Roman Mold-blown Glass: The First Through Sixth Centuries,” author E. Marianne Stern writes that evidence of Sidon’s fame exists today in the form of “surviving signatures of glass blowers who added the toponymic ‘Sidonian’ in Greek and Latin to their names.”

Stern speculates, “the addition to the names of the toponymic Sidon was probably meant to convey an assurance of quality by invoking associations with the city’s fame, not only as a glass-making center but also as a glass-working center.”

Today, there are no more glassblowers in Sidon. The Khalifeh family is keeping the ancient tradition alive about 15 kilometers further south, in Sarafand. Aside from a family in Tripoli who do not practice the tradition full time, the Khalifehs are the only glassblowers left in Lebanon, says Aline Naufal Zalloua — director of Maison de l’Artisan. The institution, which works with Lebanese artisans and offers them platforms to sell their wares, was initially founded in 1963, but has been part of the Ministry of Social Affairs since 1993.

While the numbers are incomplete, scarce and dated, anecdotal evidence suggests that many other Lebanese craft traditions — like leatherwork, metalwork, intricate woodwork and embroidery — are similarly becoming less and less popular with time.

More often than not, Lebanese artisans either wind up selling their goods at relatively low prices in tourist shops or abandoning their trade. Zalloua says that the municipality of Zouk Mikhael tried to revive the city’s once-renowned silk looms by teaching the trade to young men, but these men now look at silk work as a hobby because of economic realities.

“You have to spend hours weaving,” Zalloua says. “The price would have to be [very high] to compensate for the work.” Unable to find a market for what they produced, the apprentice weavers largely gave up, she adds. Artisans across the country are finding their work is not financially rewarding enough to keep many in business, she says.

But historically, it was decorative, handcrafted products that defined luxury, and top luxury brands today are sought-after in large part because their watches, handbags and clothing are expertly crafted by hand. Some Lebanese companies and designers are capitalizing on the one-of-a-kind nature of local handicrafts by working with artisans to adopt traditional techniques for contemporary designs. To date, these are largely individual initiatives but there is potential to widen the scale of production and bring Lebanese handicrafts back to the luxury market. 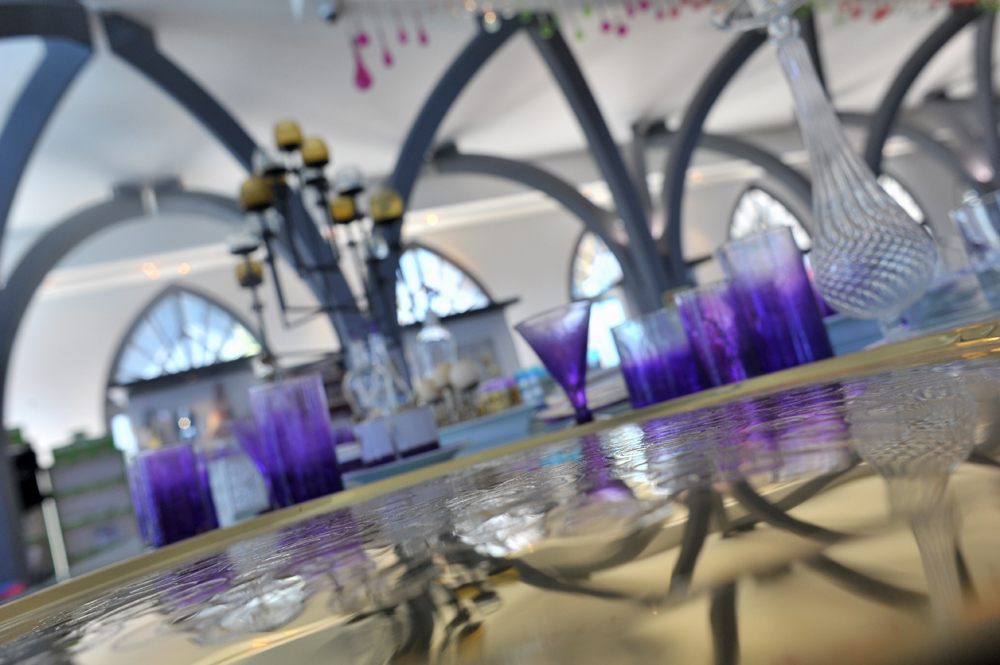 In 2004 the US Agency for International Development (USAID) published a “Global Assessment of the Market for Handicrafts.” In part, the agency found that the nature of the products — which are labor intensive and often take days or weeks to create — make them unappealing for many low-and mid-price-range retail outlets. These outlets tend to buy stock in such quantities that artisans couldn’t hope to fill orders. Fair-trade shops — or other outlets specifically geared toward consumers who want to buy products because they think the purchase will help alleviate poverty somewhere in the world — are an option for artisans’ work, but such shops are limited in number. Given that, the report concluded in part that, “rather than competing for access to the limited market for purely indigenous products, handicraft producers can adapt traditional designs and skills to complement the broad offerings of the expanding luxury market, where larger profit margins and distinctive world styling often converge.”

Zalloua, from Maison de l’Artisan, sees the luxury market as “the future” for Lebanese handicrafts. She says that she has been trying to turn her shop in Minet al-Hosn into more of a boutique, working with artisans to modernize their designs.

She works with approximately 500 families, she says, unsure of how many people are actually employed. As for how much artisans make off of sales, she says that she doesn’t negotiate when they sell her the products. “They have to live.” Zalloua wouldn’t put an exact figure on how much of a margin the store makes on products, saying it depends on the product and how much the artisan charged her.

Jason Steel, head of the Lebanese American University’s fashion design program, is working with Lebanese–Armenian designer Angelique Sabounjian on creating something called Artisan Initiative, which aims to help craftspeople in Bourj Hammoud bring their work up to luxury standards. Steel says a large part of the initiative’s focus will be on “design over a charitable cause.”

Saboujian tells Executive that while Artisan Initiative has found a space to work, the fledgling non-governmental organization is still looking for investments to get the project started.

“Though we tried several sources, funding is difficult because there is a focus on the Syrian refugees now but still we don’t want to be discouraged,” she says. Funding is necessary to bring experts from Italy to help train artisans in producing the highest quality goods possible, as this is a fundamental necessity for selling handicrafts as luxury goods, both Steel and Saboujian say.

“Nobody wants lumpy, badly designed, ill-fitting products,” Steel explains. The pair is eyeing the luxury market precisely because, aiming to sell a product that is desirable exclusively because it has a sob story behind it has a limited market. “We don’t want to tap into the market that already exists, we want the other 95 percent of the population.”

The key, Steel says, is making a product people actually want, which hinges on modernizing the design. Camille Tarazi, manager of Maison Tarazi, a Lebanese artisanal shop that has been in the market since 1862, agrees. “That’s what we need to make the tradition attractive, an update,” he says.

When one talks luxury, quality and consistency are key, everyone interviewed for this special report said. The problem is that artisans themselves often do not have the eye for what distinguishes a luxury product from an otherwise high quality product. “There aren’t as many artisans and ateliers working to the very highest level as one would find in Italy, for example,” Steel says. 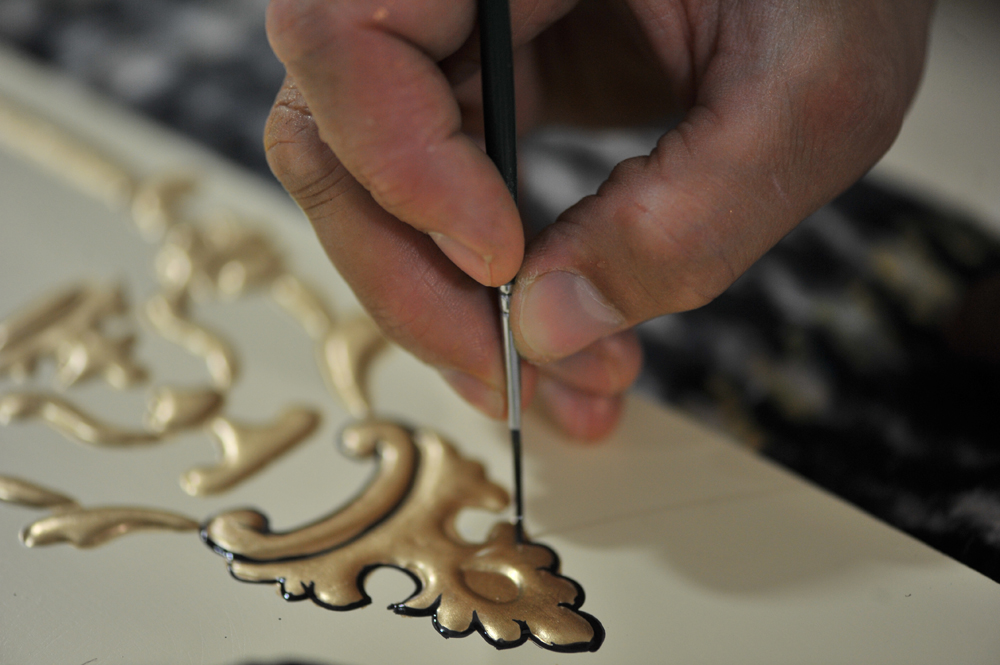 Ayesha Mustafa, founder of Fashion ComPassion, is working with Byblos based Lebanese designer Alice Eddé and helped her launch a new brand of luxury handbags called Bradley Bags. Mustafa’s company is based in London, but works globally bringing artisans’ products to the luxury market via a website and occasional pairings with luxury retail outlets. Branding, she says, is essential to entering the luxury market. “If people don’t see a brand, they won’t buy it,” she tells Executive in a telephone interview.

Like Steel, Mustafa isn’t interested in running a charity program. “You have to look at this like a business,” she says. “You want to help [these artisans], but if you don’t look at it as a business and something that will create profit for you and them, it won’t work.”

As for how the artisans’ benefit from partnering with Fashion ComPassion, Mustafa says the company pays “double or triple the price [for labor] of what’s given in the local market.” On top of that, the artisans are shareholders in the brands they’ve created and Fashion ComPassion has a bonus structure. “The better you do, the more you get,” she says. Additionally, the company invests in the artisans’ local communities and, through a partnership with the United Nations, helps improve access to education for girls in various communities.

Marketing handicrafts as luxury goods is no easy task for an individual artisan. One traditional route for bringing new products to market is displaying at a well known luxury trade fair. Doing so, however, is neither cheap nor quick. Sarah Thelwall, a consultant and strategist who has worked in Lebanon and focuses on helping people in the creative industry with business and marketing plans, tells Executive that “to take a stand at [the annual luxury trade fair] Maison&Objet in Paris, you would spend anywhere between €5,000 and €50,000 [$6,770–$67,700]. You can do it on the cheap, for a few thousand, a tiny stand, one-off-ish,” but no one will buy the products.

Not only is initial entry expensive, Thelwall says that buyers aren’t interested in “a supplier that’s there once and never again. You have to commit to three or four years’ worth.”

[pullquote]“We need to create an ecosystem for these small companies. Success will breed success”[/pullquote]

Tarazi, whose family has been selling both luxury and non-luxury handicrafts for generations, says that local artisans need support more than anything. Zalloua, whose shop is part of the Ministry of Social Affairs, complains that she has no budget and has had to put any plans to expand on the shelf until sales pick up again.

On the private sector side, Nicolas Chammas, president of the Beirut Traders Association, says the BTA is willing to help artisans, but will not run after them. “It depends on solicitation, who comes asking for what,” he says, noting that artisans have never asked the BTA for help. He adds that the BTA and Chamber of Commerce cannot push artisans’ work onto the luxury market alone.

“[You] need financing. We don’t have venture capital here. There have been some attempts, but it needs to be systematized and needs to be the rule, not the exception,” he says. “We need to create an ecosystem for these small companies. Success will breed success.”

Chammas adds that the Central Bank could play a role in helping artisans and points to Circular 331, which the bank issued last year as a way to help startups secure financing. Asked if a similar model could be used for artisans, Chammas says, “Why not?…We can create something.”

Matt was Executive's Economics & Policy Editor and Real Estate Editor from May 2014 to November 2017. He began reporting in Lebanon in April 2007, and his coverage focused on oil and gas, public policy and human rights.