Moving into a new world of parliamentary participation

At the end of February 2018, German women did it again. Chancellor Angela Merkel—supposedly the most powerful woman in the world, if one believes Forbes—won her Christian Democratic Union (CDU) party’s election overwhelmingly to form a coalition government with the Social Democratic Party (SDP), which had been hotly debated at the party and national level for months. Also, the candidate for the CDU’s powerful general secretary position, Annegret Kramp-Karrenbauer, was elected by party delegates with a democratic majority of 98.87 percent. (If she ever comes to Beirut on a political visit, her name will be another tongue-twister for Lebanese anchors.)

Moreover, only days before the CDU met on February 26, Merkel had announced the names of CDU ministers in the coalition government (which at time of this writing still required internal approval of the SDP party) and named three women to be among the six CDU ministers. The SDP, meanwhile, is also led by a woman, Andrea Nahles.

When will Lebanon have a Council of Ministers with a female prime minister, a female minister of defense, and 50 percent or more women in ministerial posts?

Let’s keep things in perspective. Numbers, it is said, do not lie. That is very useful for keeping things in perspective, especially when it comes to issues that are extremely contested and fraught with partisan interest, like gender in politics and gender relations in general. Anyone who claims to be free of bias in the issue of men and women at best deceives themselves. Men are biased in gender issues. Women are biased in gender issues. This shouldn’t surprise any woman or any man, given that the overwhelming majority of people identify themselves as either female or male, and identifying oneself is, in essence, to be biased.

As opposed to the many ideologies and biases in gender matters, simple numbers can quickly clarify a few things. Even allowing several percentage points for marginal biological and self-identification driven exceptions, global gender proportions differ only in the most minute terms among countries. At birth, boys outnumber girls by a very small margin—around 1.05 to 1—and with increasing ages, the balances slowly shift until they tilt in favor of women for groups above 55.

In the big-picture sense, half of the estimated 7.5 to 7.6 billion people on earth are women. By these ratios, there is every reason for the female share of political representation and decision making to be equal to that of males in a county that is proud of its democratic system—like Lebanon, if you ask any of its overwhelmingly male political leaders. But although the two genders are about equal in numbers, women neither globally nor locally enjoy full equality in terms of healthcare, education, labor, and politics.

For the humanly foreseeable future, it is to be expected that biological gender roles will remain distinct. That, according to the ruling cultural perspective of the 21st century, makes it even more important that gaps between the genders are closed and unjust discrepancies brought down in healthcare, education, labor, and politics. Of these four realms, where gender gaps have been measured annually since 2006 in the World Economic Forum’s Global Gender Gap Report (GGGR), the area with the most pronounced gender inequality is politics. In the GGGR’s four categories, education and healthcare have the lowest gaps and show the most countries with inexistent or very small differences in equality. The distances increase for labor, but they are by far the largest in politics.

Put numerically, the distance between the countries with the smallest and the largest gender gap on national terms in healthcare is merely 0.062 points on a scale from zero (total inequality) to one (total equality). The gap in education attainment is for most countries similarly small and stands at 0.092 points, between 28 countries with full parity score of 1 and Malawi, ranked 126th. Between the top countries and lowest-ranked Chad (144th), the gap is much more significant, at 0.428 points.

In the labor realm, where economic participation and opportunity are measured, the distance between top country Burundi’s 0.911 score and 126th-placed Mali is 0.393 points. However, across the 18 countries with the lowest index rankings, the economic participation and opportunity gap amounts to another 0.244 points, which translates into a total top-to-bottom gap of 0.673. In the political field, the gap is a whopping 0.736 points between Iceland, topping the sub-index at 0.750 points, and 144th-ranked Yemen, with a dismal 0.014 points.

At the same time, politics is the realm where women need the most support and arguably can affect the most to change the status quo and improve realities—and relatedly, conflict management and reconstruction. This is reflected in the adoption of a resolution by the United Nations Security Council, Resolution 1325, in the year 2000 (see box). This resolution was not only approved in a unanimous vote by the 15 Security Council members at the time, it has also been translated into National Action Plans adopted by over 70 UN member countries as of the end of 2017, according to the NGO Women’s International League for Peace and Freedom.

Under the influence of Resolution 1325 and also of the UN’s Millennium Development Goals (adopted in 2000 for a 15-year timeframe) and Sustainable Development Goals (adopted in 2015 for the 15 years till 2030), concerted global efforts for mitigating gender inequality, in the political spheres of UN Member States and the world organization itself, have visibly increased and shown numerically measurable results. 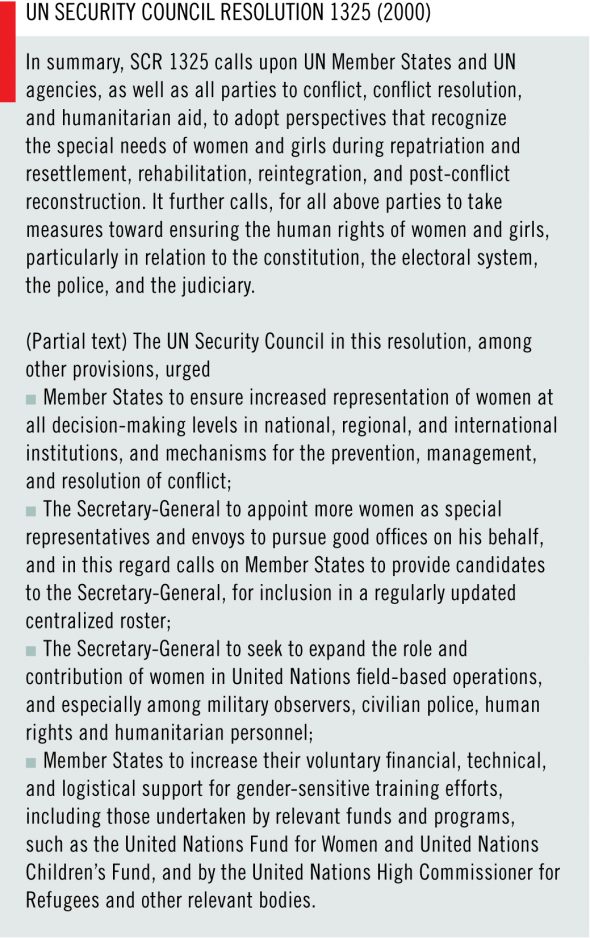 By the ratio of female MPs, Lebanon is one of the countries with the lowest female representation. This is fact. But whether it will remain so is very much in question. For all its specificities, communal juxtapositions, and cultural diversity, Lebanon is no different from other countries when it comes to gender ratios at birth. The question of whether the country is disadvantaged in closing the gender gap because of its political structures, or if it is merely slower than most other countries, including many Arab neighbors, in adapting to the 21st century’s global gender realities, is a matter of perspective.

Sofia Saadeh, a professor of political science at the Lebanese University and a lifelong advocate of women’s political inclusion, sees it is almost impossible for qualified and independent women to make it into Parliament under Lebanon’s confessional system of governance with patriarchal organization. “Historically, so far, we have had very few women in Parliament, and those who are there are not really there on their own merit. This is because we don’t have modern parties, but sectarian parties which are based on a patriarchal system, so unless the patriarch wants you, you are not in. In the patriarchal system, those who vote are mainly male, or [are] led by a male, so they will not easily vote for a woman,” she tells Executive.

Women who registered to run in the upcoming parliamentary elections have no misgivings about the challenges they face, and the extra barriers that stand in their way, from the lack of a quota system to the high costs and missing support that female candidates have to deal with even when registering their candidacies. But as campaigns have been getting underway for the 2018 elections, women nonetheless are appearing in unprecedented numbers and with extreme determination, sharing in interviews with Executive their aims and ambitions (see story).

There is also the matter of international support and the extension of the global pro-political participation mindset and organizational framework to Lebanon. The Special Representative of the Regional Director at UN Women, Begoña Lasagabaster, conversed with Executive in the new UN Women office across the street from the Lebanese Parliament. According to Lasagabaster, UN Women, working in coordination with the whole UN system, seeks to accompany all stakeholders in member nations, from national institutions and the public sector to civil society, and academia. This appears, in the case of Lebanon, to involve developing the national action plan for implementing UN Security Council Resolution 1325, which calls for greater participation of women in security forces, peacebuilding, prevention of conflicts, and efforts to protect weak or disenfranchised strata of society.

In spite of Lebanon’s political system, which as Lasagabaster acknowledges, complicates the achievement of change, she expressed having a sense that the stakeholders in Lebanese institutions and society all fundamentally know that things in the country have to change in favor of increased female political participation. In her view, a transformational attitude is present in Lebanon, and change is therefore a very real possibility, as long as it is approached with sensitivity to stakeholders’ need to maintain political equilibriums and implemented in small steps—which according to her, does not need to take a lot of time. 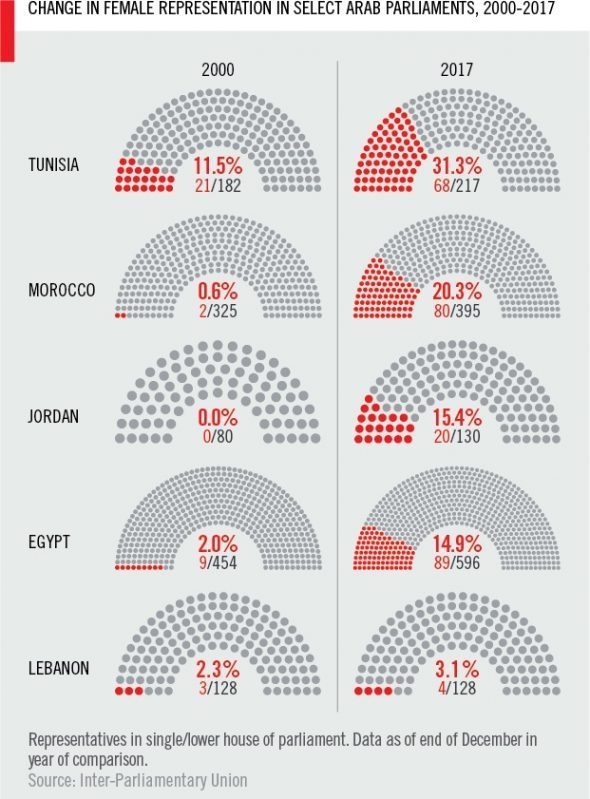 A struggle of more than 100 years

The philosopher Aristotle said that “man is by nature a political animal.” The concept of politics has indeed been ingrained in human societies since the days of the ancient Greeks—but so has the human struggle of comprehending the sexes and their political equality. The very example of Aristotle illustrates this, as he thought men superior and rulers by nature and women inferior and men’s objects. His views on women and their political inferiority to men influenced (other male) thinkers in the advancement of male-centric civilizations over many centuries.

When the political systems that today are called liberal democracies began to take shape in the 19th century, the battle for equality had its form in the quest for female voting rights. It helps explain the enormous difficulty of this struggle that it took what were considered to be the most advanced countries of the age half a century or longer to establish female voting rights.

In Great Britain, it took decades of protests and demonstrations for women to win these political rights. In Finland and the Nordic nations, which are leaders in female political participation to this day, female voting rights were established beginning in 1907. In Germany, active and passive voting rights of women were first instituted in 1918. In the United States, it took from the 1870s until 1920 for a proposed constitutional amendment prohibiting discrimination in suffrage on the basis of gender to be adopted. Even when one discounts outlier countries among parliamentary democracies that were comparatively early or late in introducing them, the implementation of female voting rights came to pass from the aftermath of World War I up to the period right after World War II. 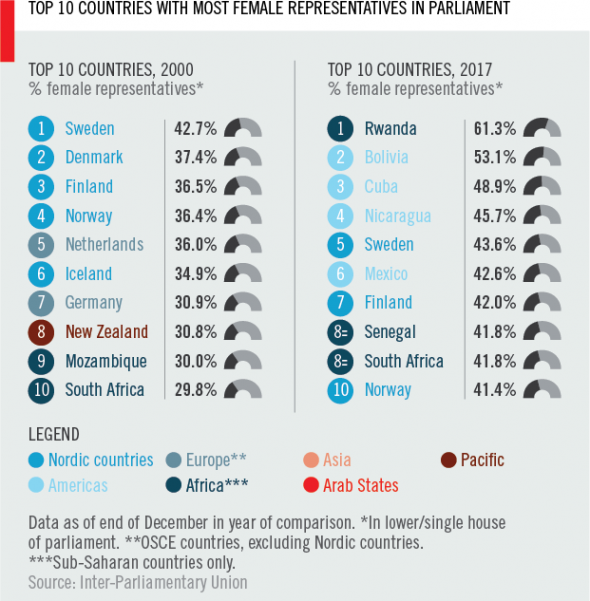 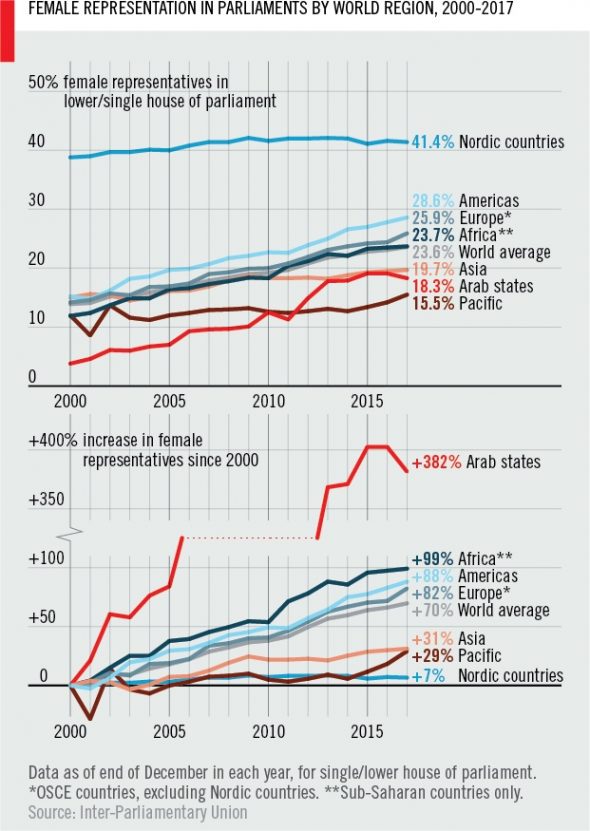 Compared to the length of the struggle for political equality in terms of women winning the right to vote, the ongoing momentum in the development of female political participation with the UN, international civil society, and many national governments as proponents, appears to be deeper, wider, and much more comprehensive than in previous periods of societal evolution.

The question is thus: Will Lebanon and its sovereign, the people, remain in denial of the many advantages that significant progress toward greater women’s inclusion in Parliament and the Council of Ministers can realize? Or, will Lebanon implement greater equality in political decision making, furthering national progress and giving hope that solutions could be found to problems that have not been solved under previous political structures? This spring, the people will give us their answer, and the world will take note.

Childcare is not just a practical problem

All in a day’s work