From Beirut to Dubai

The road to success is not easy. It is even harder when working in the nightlife industry in a country like Lebanon, where the bad years of political instability—which typically lead to economic downturn and low purchasing power—far outweigh the good years of thriving tourism. But this is exactly the road that Rabih Fakhreddine chose, opening his first bar, Faces, in Hamra in 2011, a year before war began in neighboring Syria.

Although the road remains difficult, Fakhreddine today, at the age of 31, has found success in the food and beverage (F&B) business, as the CEO of hospitality management company 7 Management, which he founded in 2014. 7 Management, which employs 270 people and has an annual turnover of $13 million, owns and operates three nightlife venues—Antika Bar, Seven Sisters, and February 30—and one café, Kahwet Beirut. The company has already expanded into Dubai with Seven Sisters, and has its eyes on further regional and international growth, not to mention introducing new concepts to the local market.

Fakhreddine says he was always passionate about the hospitality and food industry, having experimented with cooking since he was five years old. After high school, Fakhreddine even thought of majoring in hospitality management, but at that time no universities in Lebanon offered the program, so he chose to study business marketing at the American University of Beirut (AUB). Fakhreddine’s interest in hospitality continued; during his university days, he was active in student societies and clubs, organizing events such as Ramadan suhoors or World Cup and European Championship viewings.

Upon his graduation in 2006, Fakhreddine worked for a few months at advertising agency Leo Burnett Dubai until the July War stirred his nationalistic sentiments, and he decided to come back to work and invest in his country. He started at British American Tobacco (BAT), handling the HORECA accounts for Lebanon and the Levant, before getting promoted to marketing manager of Lebanon. “Through my position with BAT, I familiarized myself more with the F&B industry and developed a strong network of hospitality stakeholders, since I had a big budget to spend on all the nightclubs and bars in Lebanon and the Levant,” Fakhreddine says, adding that in parallel to his job with BAT he was also a silent investor in several bars in Lebanon. Both his position with BAT and his silent investments led him to realize that he had solid potential to operate his own nightlife outlets.

In late 2010, Fakhreddine and two of his BAT colleagues created Concepts in Motion, a hospitality management company, and, in early 2011, launched Faces in Hamra, which was then at its nightlife peak. This was followed almost immediately with the launch of two more Hamra venues: Big Shot, a bar known for its R&B music, and then February 30, in 2012. In 2013, the group ventured into Uruguay Street with the opening of Checkpoint Charlie, while further investing in Hamra with the opening of Walkman. 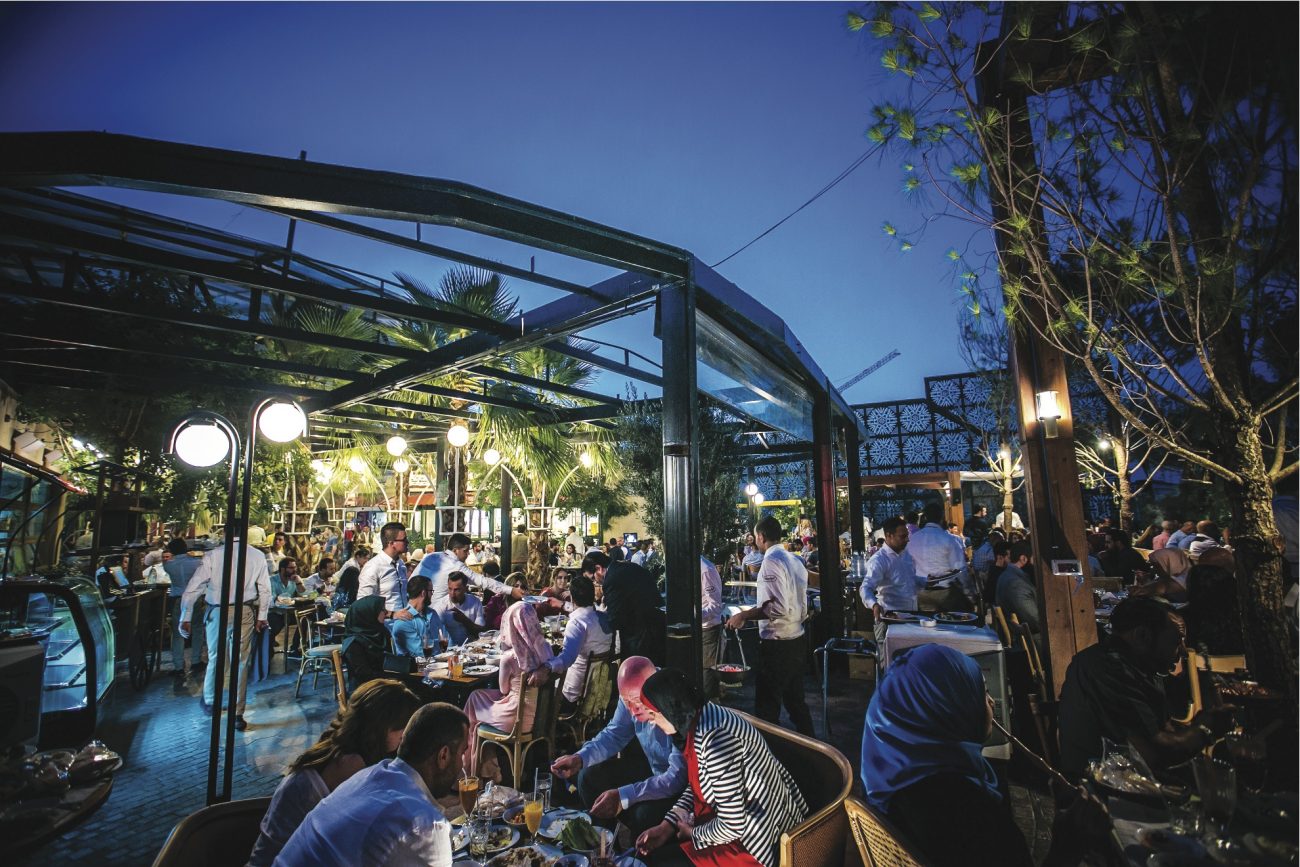 In 2014, Fakhreddine left BAT to focus on his hospitality and nightlife ventures. Along with three partners, he developed 7 Management and merged all of Concepts in Motion’s venues into the new venture (with the exception of Big Shot, which had closed before the merger). Other than February 30—which was reopened early this year in Downtown’s waterfront area—all of Concept in Motion’s venues have since shut down thanks to the decrease in activity in both Hamra and Uruguay Streeet, which is due largely to the transient nature of Lebanon’s nightlife hotspots.

There are four shareholders behind 7 Management: General Manager Hani Hachem, and managing partners Karim Mohamadieh and Ralph Boustany, in addition to Fakhreddine as CEO and majority shareholder, with 52 percent of the company shares. Speaking of his partners, Fakhreddine says: “We are one team, with each bringing his own unique talents to reach this great result.”

7 Management is a holding company and owns majority shares in—and all of the trademarks of—the venues it creates and manages. It has managerial contracts with the venues, which exist as separate legal entities, and takes a standard 7 percent management fee from each one.

In addition to 7 Management, each venue has some silent investors, with a total of 20 partners across the group. “We decided to have this structure where we have many shareholders per venue because we wanted to have a higher outreach with more PR coming from each partner—so we have five to ten partners with small shares for each outlet,” Fakhreddine explains. “We choose them for their strong PR and not for their financial capabilities, because in the end we can take a loan from the bank if we are only after the money.” 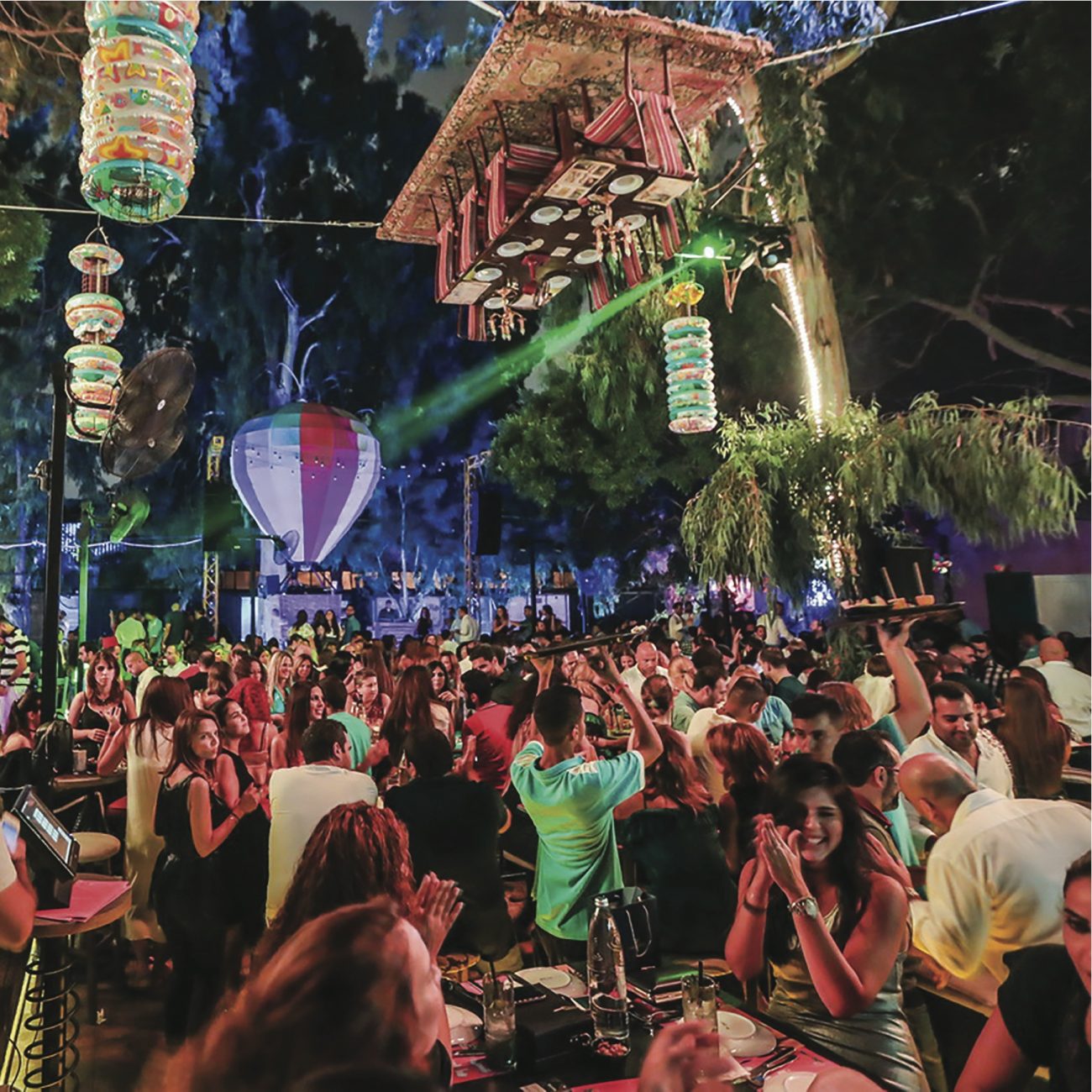 Since its development, 7 Management has been expanding aggressively, with a new venue every year. In 2015, 7 Management’s first outlet, Seven Sisters, was launched, followed by Antika Bar in Blueberry Square Dbayeh in 2016. In 2017, the company opened a café concept called Kahwet Beirut and a summer only venue called Sayf Feb30, in Mar Mikhael’s old train station. In 2018, they relaunched February 30 in its new Downtown location, and still in the pipelines is the opening of a snack concept called El-Kbeer, set for late September, as well as an oriental-nightlife-with-a-twist concept in collaboration with Grand Factory Group set to open at the end of the year. In 2019, 7 Management plans to open a Japanese restaurant in Lebanon.

Investment in these venues comes from silent partners and 7 Management, which secures funds mainly from the central bank’s subsidized loans and Kafalat. “It is better to take loans because of the interest rate and the grace period you get the first year through Kafalat,” Fakhreddine says.

Average investment for 7 Management’s outlets in Lebanon ranges from $500,000 to $1 million. Fakhreddine says they have learned to think of their venues as pop-ups, minimizing their initial investment and then adding to it the following year in order to guarantee a fast return on investment and minimize risk. “That’s what we did in Sayf Feb30: We put in a $400,000 investment, and we made $600,000 the first season. We also moved Antika Bar from Dbayeh to the waterfront this summer with a minimal investment. You have to think smart in a country like Lebanon,” he says.

So far, the majority of 7 Management’s concepts have been in nightlife, which Fakhreddine says served them better at first. “Since we were still at the beginning of our careers, we wanted something that would generate money fast. F&B is a long-term and consistent investment that generates money but is definitely not like nightlife in terms of the speed of making money. We were at a time in our business where we wanted to make profits and be able to reinvest in the market and in new concepts and brands,” he explains.

Another reason the group chose to invest in nightlife is that, back then, it was the booming business in Lebanon, attracting both foreigners and locals. “In my opinion, the key advantage that Lebanon has when it comes to nightlife is that you can’t imitate the vibe, the people, or the positive energy that exists only in Lebanon, no matter how big your investment is or how lovely your design is. It’s the people that make the difference at the end,” Fakhreddine says.

But he acknowledges that nightlife is not what it used to be in Lebanon, due to the lack of tourists and the dwindling purchasing power of locals. He also says that while nightlife does generate more money than F&B, its lifespan is short, while a successful F&B concept could last for many years, thereby generating a steady profit. As such, 7 Management took the strategic decision to expand their business into F&B with the opening of Kahwet Beirut, and with the future opening of El-Kbeer and the Japanese restaurant. With only Kahwet Beirut operational to date, Fakhreddine says F&B constitutes 20 percent of their total revenues, but he hopes to reach a 50-50 split in a few years.

Another reason that 7 Management is diversifying into F&B is that the move will give them access to a much larger regional franchise market than nightlife does. “For franchising opportunities, nightlife is restricted to Dubai and Egypt in the region, because of the restriction on alcohol in most of the other countries. So, from a strategic perspective, expanding in the region requires F&B concepts that could work in KSA or Kuwait,” Fakhreddine says. 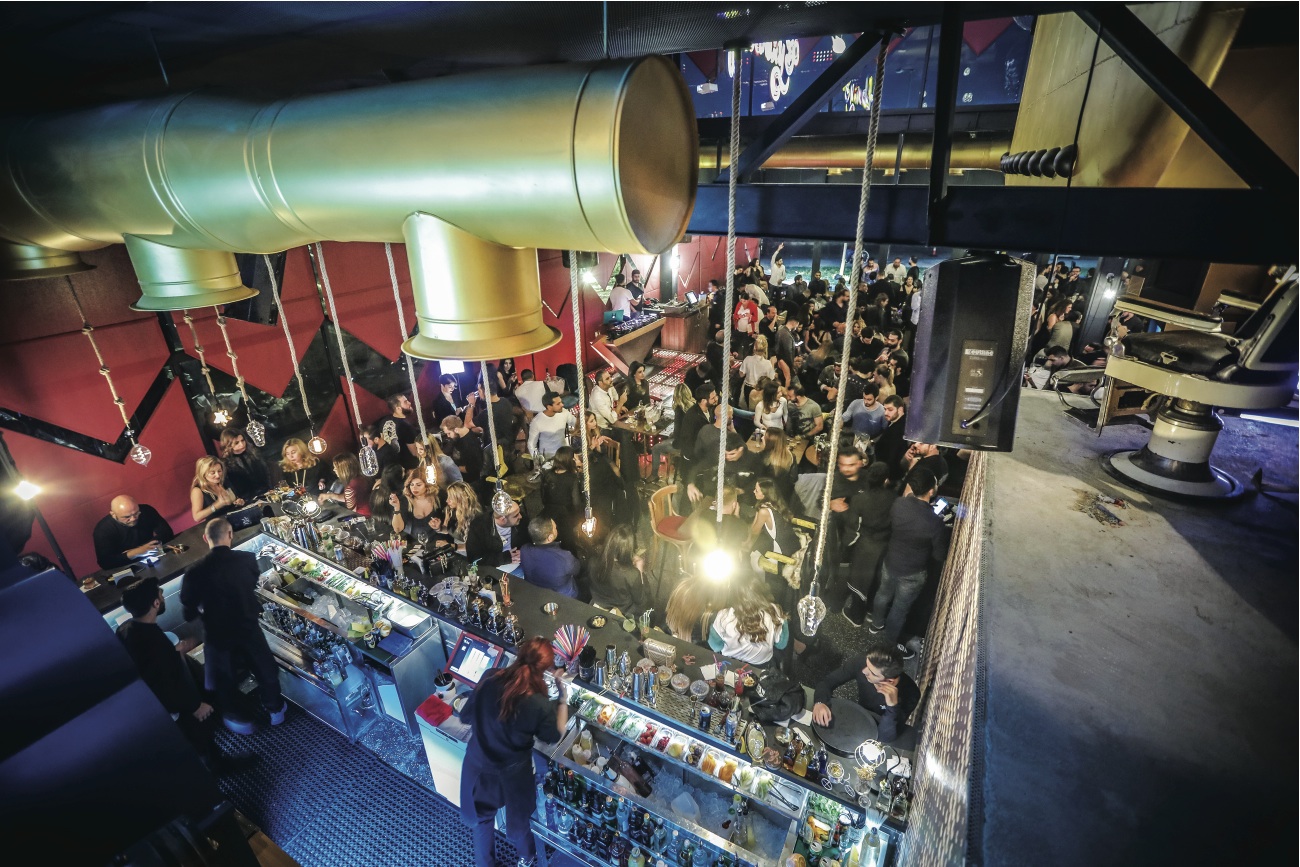 [/media-credit] The new February 30 at the waterfront

Lebanon being an unstable market, it is no wonder that most hospitality operators look outwards for diversification opportunities, and 7 Management is no exception. The company began by scoping out the market in Dubai through the Antika Night events they held frequently in various hotels in the city over a period of two years. This helped them to understand the market and gather a huge database of mainly Arab clientele, Fakhreddine says, which they utilized when launching Seven Sisters earlier this year in Dubai’s JW Marriott. In Dubai, 7 Management has developed a partnership with Bulldozer Group, a hospitality management company founded by Russians with an arm in Dubai, which owns and operates dining brands such as Novikov, Cipriani, Downtown Toko, and Sass’ Café. Together, the two companies will be launching Antika Bar Dubai in early 2019, having already launched Seven Sisters Dubai. This strategic partnership allows 7 Management to tap into international—mainly European—clientele, which is a demographic that may have been difficult to access otherwise.

Speaking of operating in Dubai, Fakhreddine says that although their profit margin is higher there than in Lebanon, the cost of operation is also a lot higher. “Our margins in Lebanon are much higher if we were under normal circumstances. We do make more money in Dubai, but we also spend more, as cost of alcohol is high and so is the salary of employees, rent, and taxes,” he says. “But Dubai is strategic in terms of the exposure you get, and in terms of diversification, because we know that Beirut is not a stable market.”

7 Management plans to take the Lebanese snack brand El-Kbeer not only to the region—starting with Saudi Arabia, a year after its launch in Beirut—but also internationally, to London and New York. Fakhreddine says it has the potential to do well in these further flung markets since Lebanese snack food is a growing trend.

Fakhreddine has achieved a lot in just seven years. Starting with one small bar in Hamra, the company he founded today runs four successful brands, one of which already has a regional presence. 7 Management does not plan to stop here, and with its major partners boasting an average age of 32, it seems we will be hearing about the company for some time to come.

Healthcare sector in Lebanon carrying its own, but still in need of coordined development