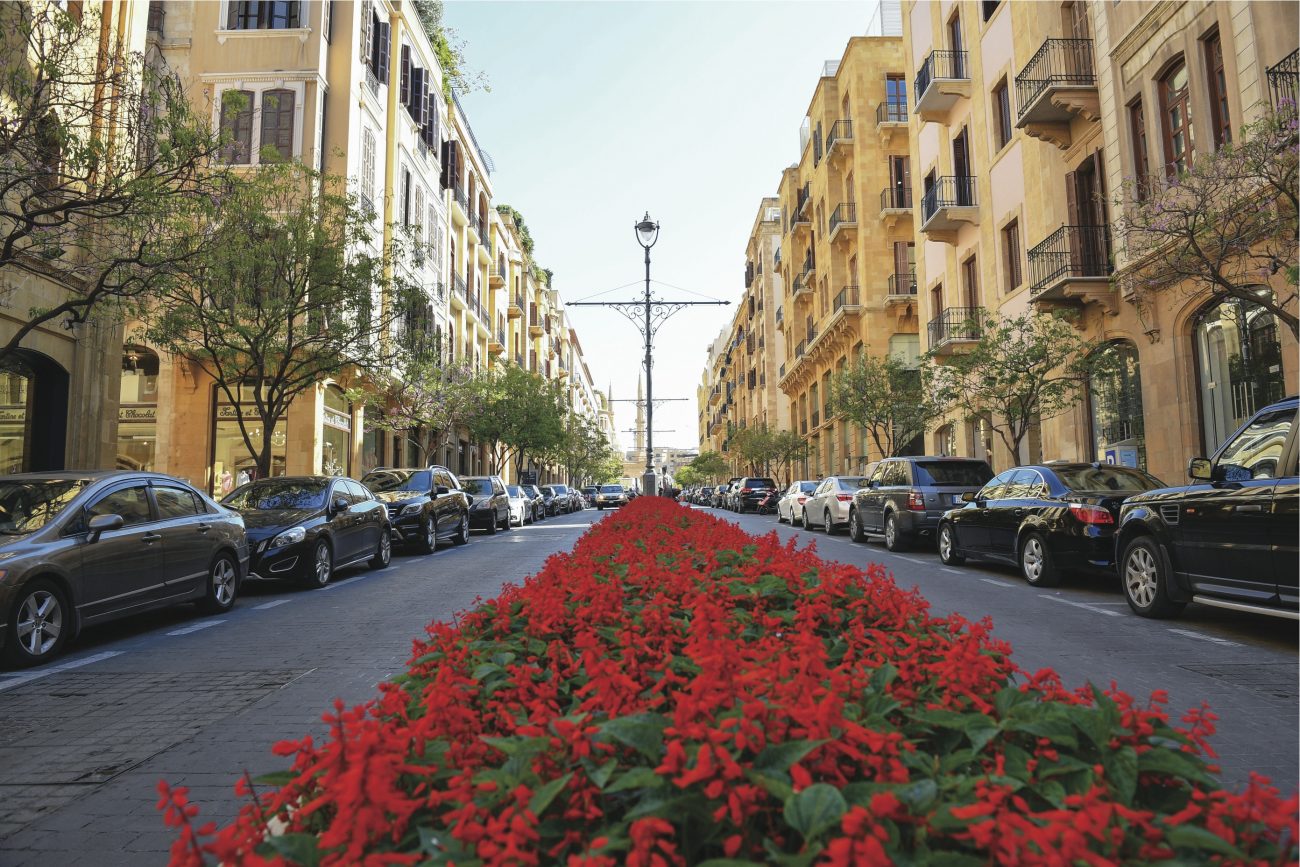 The telltale signs that herald spring in Lebanon are already in full swing: the longer days, the blossoming streetside flowers and trees, and the mounds of janarek (sour plums), freize (strawberries), and akidinya (loquats) at roadside fruit stalls have all made their early appearance this year. This is in addition to the most indicative—and sad—sign of all, the almost eerie emptiness of Beirut on weekends and holidays. In winter, this void is not as obvious in the city simply because few pedestrians are about anywhere and car traffic is always overbearing. But come spring, people head to their village homes.

It is arguably normal for city dwellers everywhere to decamp to the mountains or seaside for a change from their routine or a breath of fresh air during their time off work, and more so in Lebanon where distances—the dreaded traffic jams aside—are short, and thus encourage weekend escapes. But, in Beirut, the desire to flee this city seems to run so deep that there is a mounting and tangible sense of discontent among its inhabitants that intensifies with every sunny weekend until the last day of summer. Could this be because of the low quality of urban life the capital is providing its residents with? More and more Beirut dwellers are complaining about the endless traffic gridlocks, the increasing levels of pollution, the lack of well-maintained and easily accessible public green spaces, the systematic destruction of Beirut’s urban heritage and cultural fabric, the heightened cost of living, and the list goes on.

The trouble is not only with the city’s waning appeal to its natives and residents. Beirut’s touristic appeal has been declining as well, with foreign visitors heading to cleaner sea shores north or south of the capital or to more authentic and culturally interesting experiences in Lebanon’s rural areas. Ezzat Koraytem, managing partner of Its.—a media and events organizing company—and secretary general of the Beirut Cultural Festival (BCF), believes this is especially true with regards to  summer cultural festivals, adding that this was the driver behind the inception of BCF.

“In all other cities across the world, there are activities going on in the summer, but in Lebanon these activities happen in areas outside the capital. Beirut is neglected, with people only landing at the airport, and then spending most of their time out of the city. So we thought that someone should take care of Beirut, and so, we created the Beirut Cultural Festival in 2015. The goal of the organization was to make sure that the heart always beats in all of Beirut,” Koraytem explains. The first edition of BCF, originally planned for 2015, was meant to take place in Nejmeh Square but got canceled because of its closure to the public following protests in the area. Since then two editions of BCF have taken place—in the Waterfront district in 2016 and in the Beirut Hippodrome in 2017—and indeed the now annual event has contributed to placing Beirut on Lebanon’s cultural festivals map. But the BCF, while commendable, is nowhere near enough to reclaim Beirut’s position as a summer cultural destination.

Beirut is in dire need of revitalization. There needs to be a clear and shared vision that guides public and private stakeholders and civil society toward realizing concrete solutions for the main challenges facing urban life in Beirut—complete with a strategy to achieve them and a delegation of responsibility. This will not only make the quality of life of its citizens immeasurably better; it will also draw tourists back to Beirut.

There is no better time than this second quarter of 2018 to embark on this mission of reimagining Beirut—and not just because it happens to be spring season right at the time when Beirut is in need of its own rebirth. The CEDRE donor conference in April secured pledges for funding needed to implement Lebanon’s Capital Investment Plan (CIP). Many of the projects proposed in the CIP address issues facing Beirutis, including the lack of public transport and proper infrastructure. The CIP also includes projects under the heading of culture, tourism, and industry relating to “the restoration of unspecified archaeological sites and heritage buildings, the support of unspecified museums, and allocations of money to cinema, the arts, public libraries, and educational facilities” (see article in Executive’s April 2018 issue). It is hoped that at least some of these projects will be in Beirut.

Through a series of upcoming articles, Executive will be addressing the many dimensions of reshaping urban life in Beirut. We want to start right where the urban landscape contrasts its greatest tourism and hospitality potentials with the greatest desolation in spring and summer: the city center. Downtown Beirut, rebuilt in stages beginning in the 1990s under the mandate of The Lebanese Company for the Development and Reconstruction of Beirut Central District sal, better known as Solidere, is where the potential to revitalize hospitality and tourism in the capital is logically concentrated. With its wide spacious roads, pretty buildings, numerous glitzy hospitality venues, yacht marina, and largely landscaped roads it is easy to assume that Beirut Central District (BCD) and its historic political core, Nejmeh Square, is already a touristic hub. But, as the saying goes, not all that glitters is gold. There are several elements that need to be addressed in the area, including the lack of public green spaces and venues for cultural activities, before it can meet the needs of the modern day tourist or urban dweller.

As part of its master plan for BCD, Solidere believes that Waterfront—a landfilled district on the north side of Downtown which is still under development—and several other projects that are yet to be completed in BCD will have elements that offer a more complete tourism package to Beirut’s visitors, as well as an improved quality of life for its dwellers.

Waterfront today houses several night clubs that are more than happy with the surrounding emptiness, which allows them to pump up the volume as high as it goes with no complaints from the nonexistent neighbors—the area’s central location does not hurt business either. These concepts are certainly successful contributors to nightlife in Beirut and have proven so for Rabih Fakhreddine, chief executive officer of 7 Management which operates three out of the nine hospitality venues in the district.

He tells Executive that on average over 5,000 people flock to Waterfront venues each weekend night. The downside of the arrangement, however, is that the venues there are all on short-term non-renewable contracts as the area is designated by Solidere to be of mixed use with both commercial and residential buildings as well as second marina in the works. This overall plan means that Waterfront might not be lost to hospitality entrepreneurs, given that both types of development projects would entail opportunities for venue operators to bring new concepts to market. The time when these opportunities would present themselves, however, could be quite a long ways off if the district’s slow track record of attracting upscale developments is any indication. While Solidere banks on the long-term potential of Waterfront, company officials hope in the meanwhile, and for the next few years, that hospitality operators will turn their attention to other opportunities in the heart of Beirut (see interview with Solidere General Manager Mounir Douaidy).

It is also to be hoped, in the interest of the hospitality entrepreneurs and of Solidere, that the lessons learned from relatively recent experiences in Zaitunay Bay (almost none of the original venues on the bay are still in operation today, and they have been largely replaced with more affordable establishments) and Uruguay Street will not be forgotten. Concepts developed in the area need to cater to both tourists and locals in Lebanon, not all of whom are necessarily wealthy. Also, an overarching management of the Waterfront area would do well to enforce consistent and unified regulations on hospitality operators to avoid unpleasantness such as overcrowdedness and chaotic offerings.

Solidere’s vision for BCD also includes a 70,000 square meter public garden in Downtown and a museum of Beirut’s history that will be adjacent to an archeological site. Once they are completed, both of these developments will go a long way in making BCD an attraction for tourists and locals alike.

Meanwhile, Nejmeh Square, which was reopened to the public on December 31, 2017 with a memorable New Year’s Eve countdown event, presents a potentially exciting opportunity to address what is missing in Beirut with regard to tourism. The square has had its shares of ups and downs and has emerged from its most recent down—its closure to all local visitors following protests in 2015, though it had been largely empty even prior to that due to numerous sit-ins and business closures—as an almost empty canvas ready to be utilized.

Aside from the few restaurants that remained in operation despite all odds, venues in Nejmeh Square have slowly shut down throughout the years when footfall was low or non-existent. The Municipality of Beirut’s plan is to incentivize interested past owners to reopen their shops and attract new investors into the area, but this is difficult. Investors have been hurt by past experiences in Nejmeh Square and are extremely cautious. They are waiting for other operators to take the plunge, in addition to security guarantees ensuring that the area will not be closed again. Given the current dismal economic situation in Lebanon, it may be a while before someone risks their cash on an uncertain investment.

Meanwhile, the square is being utilized as an events venue with several planned festivities taking place in the area, following the success of the New Year bash. Koraytem, who says he is the advisor of Prime Minister Saad Hariri regarding events intended to revive Nejmeh Square, is the first to admit that these events are not a long-term solution to revitalize the area: “Events bring people but then people leave. We have to find a way to convince investors to come back.”

To do so, Koraytem says Its. proposed a three-tier plan to the prime minister. “In addition to the events, you have to have a very strong communications network on social media to show people what is being done so that they become convinced that what is being done is sustainable and meaningful. Once this is done the investors will see that there are good events, things are well communicated, and there is a clear vision so they will at least consider [investing in] the area. But investors also need strong incentives to be convinced, including the sense that what they are investing will be protected,” he says, adding that his plan proposed a unified management structure for future venues in the style of hospitality clusters.

It is, however, not so easy to implement such plans in Nejmeh Square since there are multiple owners and stakeholders—from both the public and private sector—involved. The future of the square beyond the frequent events and festivities, such as the upcoming jazz festival, therefore remains uncertain. But if one were to dream a little dream, and reimagine parts of Beirut, would Nejmeh Square not make a wonderful designers and artisanal craftsmen hub? Or a setting for different cultural spaces, such as a public library and art galleries?