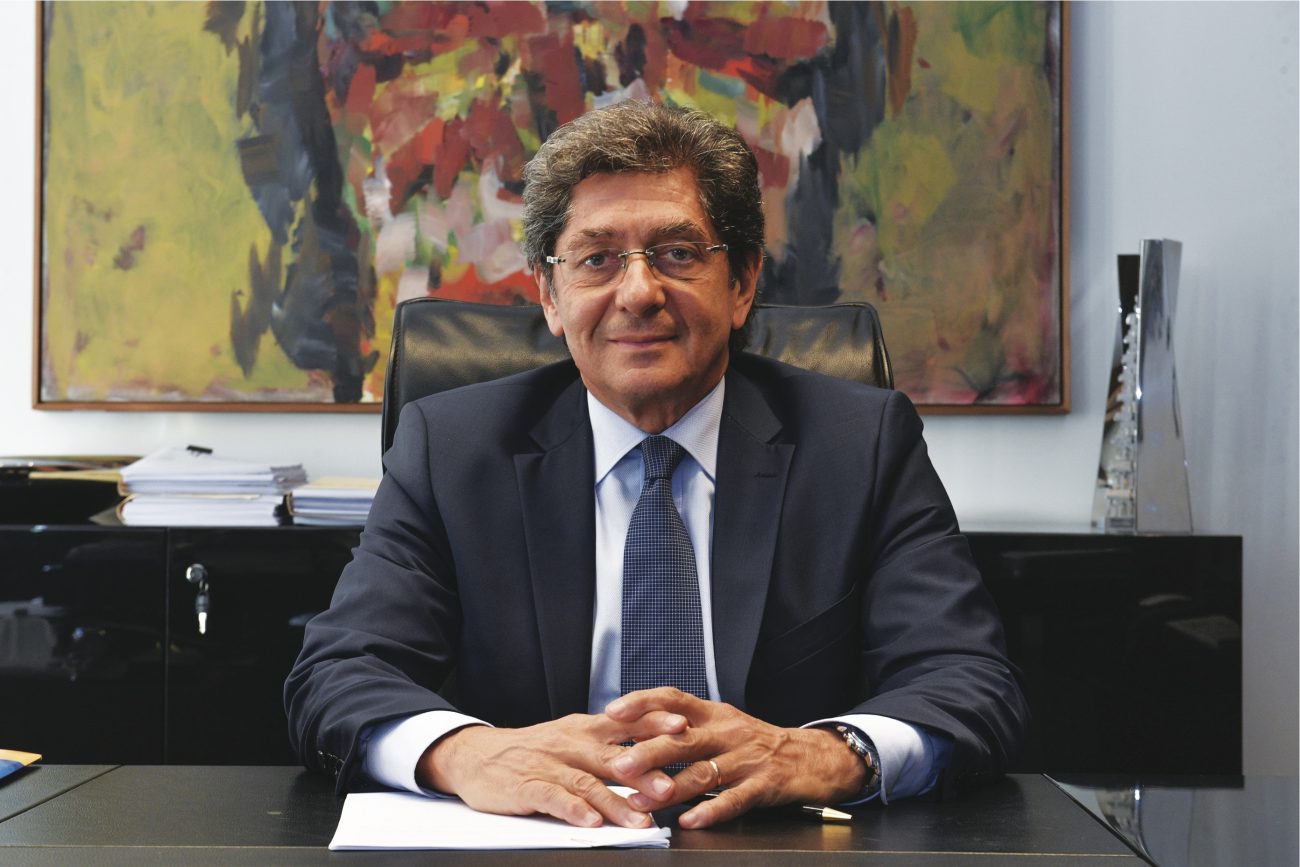 Executive sat down with Mounir Douaidy, board member and general manager of Solidere, to discuss progress in the company’s master plan for Beirut Central District (BCD), and how the planned developments could contribute to the revitalization of BCD as a tourist destination that encompasses the essential pillars of hospitality, retail, and cultural activities.

E   Today, Solidere is in Phase 2 of its master plan described as the development of the Waterfront area and the eastern marina.  When can we expect this to be completed?

The area is currently closed off for works, and excavations are underway to create the marina, which will be completed within the next two years.

Once this is done, it will be the second marina, the first marina being the western marina where Zaitunay Bay is, and there will be a marina on each side of the reclamation area [between Zaitunay Bay and Waterfront]. This is going to be another prime tourist component of the BCD, which will probably also have what the western marina has around it today in terms of restaurants, activities, maybe even hotels eventually.

E    Why did Solidere decide that a second marina was needed in BCD?

There is an under supply of mooring space. The current marina is overloaded, and we have many people who want spots, but can’t find any. The eastern marina will take relatively smaller boats and yachts (between 16 and 30 meters), while the western marina can also take larger boats and yachts.

Also, regardless of the demand, [we are committed to doing it] because it is in the master plan and part of Solidere’s obligations to execute all these main infrastructure components. We already completed the infrastructure of the whole [Waterfront] area, we did the western marina, and now there is the eastern marina.

And the fourth element that we still have to do—and which also goes under the big heading of tourism—is to landscape this [Waterfront] area. When we do that, this should also attract bigger footfall and stronger tourism.

E   What will the landscaping of the Waterfront area include? And what is the time frame for that?

It is planned, but its execution should come in sequence after we have finished all these big groundworks. Since all the other infrastructure has been completed—meaning everything that is underground [in terms of the network of utilities which includes water, electricity, drainage, and sewage] and the roads and lighting on top—we will finish the eastern marina, and the only thing left to do will be the landscaping.

The landscaping will consist of the 70,000 square meter public park [located between Zaitunay Bay and the Four Seasons Hotel] which will happen in the next three years, and there is also the plan to landscape the whole 1.3 kilometers corniche starting from Zaitunay Bay and running all the way along to the Seaside Arena.

Parts of the walkway are already open for bicycles and pedestrians, but it’s not all open for cars yet. You should imagine Waterfront with all the plots that are destined for development built, and in front of it you have the corniche road, which will also be landscaped. All this landscaping will enhance the environmental and esthetic image and quality of Waterfront and will [also] drive footfall and tourism to the area.

E   Beyond the Waterfront area, what, from Solidere’s master plan, remains to be done in terms of landscaping in Beirut Central District? Martyrs’ Square area, for example, is currently rather drab.

Fifty percent of Solidere’s surface area is public space, and the remaining plots are all private plots which already have buildings or where new projects may be built. Thirty percent [of the public space] is designated to be all green, including the park, corniche, and all the other open spaces that exist south of the corniche such as Martyrs’ Square.

Under Martyrs’ Square, there is a public parking lot planned. … Since the land belongs to the municipality, it is principal the municipality that is normally entrusted with such projects in the city but it has to be done before  Solidere can landscape the top part.

E   What about plans for the Garden of Forgiveness (a garden representing reconciliation to be situated in the Nejmeh Square-Maarad Street intersection amidst several places of worship)?

The Garden of Forgiveness is a historical location and is a spot that we have obviously planned to do, but that we have not been able to start executing for many reasons,  namely the country’s circumstances including the different events that happened around the area especially after 2005 in terms of sit-ins and road blockages.

Nevertheless, it is something that has to be done, and the idea keeps going from one year to another until the time comes when, hopefully, the circumstances and required funding will allow its execution.

E   Retail is a major driver for tourism. How would you evaluate the performance of the Beirut Souks, and what projects are still being undertaken by Solidere there?

The department store designed by Zaha Hadid is being completed and will take around a couple of years to open and is the last component we have to do there.

The footfall has been fairly good. Obviously there are times when we have a much larger footfall and others, such as during the weekdays, when there is not as much footfall. But it also all depends on the activities within the Souks area. We have been creating activities in addition to all the activities that are proposed to us by third parties such as NGOs and event organizers.

All these activities are looked at from the point of view of how much footfall they bring and how much of a push they give to the tenants of the Souks. Supporting complimentary activities is something Solidere has been very active at, and this has yielded very positive results over the last few years.

The two main areas where events take place are the Souks and Saifi Village, and occasionally Zaitunay Bay, which Solidere does in conjunction with the Bay’s management.

E   Waterfront has also been used as a space for large-scale events such as the historic visit of Pope Benedict XVI in 2012. Do you see an ongoing potential in Waterfront for such events?

When the Pope came, we had not started exploiting the land yet; it was open and flat, and not much was happening there. But now, many projects have been created, namely a number of what we call temporary activities, which operate for around five years.

E   By temporary activities you mean the hospitality venues and similar projects? What is Solidere’s strategy behind these venues?

It all started several years ago when we felt that we had all this land that is up for sale lying idle while the infrastructure works were being completed.  So what we thought was that, while we are waiting to sell all these plots, we can put up some activities of a temporary nature.

There was Biel to start with and then came the One, then Kidzmondo and the Music Hall, and in the last few years, we have agreed with certain operators to bring in other activities such as Kahwet Beirut, 7 Sisters, or Garten, but this is about it now as space has become very limited.

What we have today is good to keep the footfall going, and it was a way to introduce the public to Waterfront. The public knows Waterfront from physical activities, such as jogging or biking, and now there are also these hospitality activities.

E   How long are the contracts on average?

About four to five years, and there is no intention to have them renewed.

E   We noticed that there are already some permanent developments being constructed in Waterfront. Could you tell us more about that?

Two developments have started and will continue, albeit at a slow pace given that the situation in the country is not very encouraging. But I think the starting point is there; we have been advised that BLOM will be starting construction very soon—within a month or two—and the moment that one building comes up, others will follow.

E   Do you think that once developments in the Waterfront area are complete, and the area becomes a mix of commercial and residential use, its contribution to tourism will diminish somehow?

Not necessarily. Look at what happened in the Minet el-Hosn area where all the restaurants are today. You have all these buildings that came up, whether residential or offices, but what do you have on their ground floors?

Ok, so the same thing eventually may and will happen on Waterfront. You will have all this mix of buildings, but on the ground floors it is, of course, allowed by Solidere to have commercial activities including restaurants.

So it is not that if you have residential or office buildings on Waterfront, you will not have any hospitality components. On the contrary, there will be a hospitality component in each building plus the two marinas. Even facing the marina, which is under construction now, there are all these plots that we have not yet put up for sale, and which are envisioned by us as a good location for hotels eventually. We will encourage investors in the coming five to 10 years who want to buy these plots to [build] hotels if the economic situation in the country permits.

E   Are there any cultural developments planned for BCD? For example, at what stage of completion is the History of Beirut Museum, and what can you tell us about it?

It is a collaboration between Solidere, the Municipality of Beirut, the Ministry of Culture, the [Council for Development and Reconstruction] CDR, and the Kuwaiti fund, which contributed $30 million several years ago for the construction of this museum. It will not be enough to finish the museum, and so what is needed beyond that will be contributed by Solidere in conjunction with the rest of the Tell area—an archeological site adjacent to the museum which encompasses four or five different civilizations. All efforts are being made to have it done by 2020.

E   Finally, is the idea of a Beirut Opera House still viable?

The opera house is an idea that has been proposed to us many times either in Waterfront or in different spots in the city. Solidere itself was not going to do an opera house because it is not our business to do that, but we encourage and support people who would bring this idea to execute in Lebanon.

Of course, it requires institutions or individuals who are ready to bring the idea, and they would have to make agreements with an international opera house abroad (probably Paris or London). They would have to find the spot in Lebanon that is suitable, and there has to be funding. Solidere can create the framework for this funding, but it cannot put in all the money for this.

So far, the few investors who came along for this did not find a location that was 100 percent appropriate among the ones we proposed for this project. We hope that one day there will be an opera house or a big congress center in Waterfront, which will incorporate a place where you can organize operas and other types of functions, such as conferences or a big theater—and in fact, I am sure it will happen eventually.