Cheers for the beers

Compared to the ancient history of beer in the Middle East, Lebanon’s small craft breweries are extremely new on the scene. The earliest evidence of beer brewing was found in Mesopotamia some 6,000 years ago, while the world’s oldest brewery, which was located in Egypt, dates to around 3400 BC. Beer eventually made it to Europe in the Middle Ages, where consumption of the brew flourished among the masses.

Beer’s popularity has showed no sign of fading since, with global beer production reaching 1.96 billion hectoliters (hl) in 2016. China leads in beer production (460 million hl produced in 2016) followed by the US, which produced 221.25 million hl of beer in 2016.

In the last few years, the demand for craft beer—defined by the US Brewers Association as beers produced by small, independent, breweries in a traditional or innovative way—has increased significantly, both in Europe, and in the US. For example, the number of operating craft breweries in the US rose from 1,596 in 2009 to 5,234 in 2016 according to the Brewers Association, while the number of microbreweries has tripled in Europe since 2010. Paul Choueiry, manager of Les Caves de Taillevent and its recently opened craft-spirits bar, The Backroom, says, “The trend in Europe really flourished four or five years ago. I travel to Ireland almost every year, and I see that existing craft beer breweries are doubling their volume year-by-year, and new breweries are opening year-by-year.”

In Lebanon, the demand for craft beer has been growing steadily, with the last few years bringing more local success stories and a maturing market.

It’s all about timing

For generations, the local beer market in Lebanon was dominated by Almaza, a brewery that dates back to 1933 and is estimated to produce 24 million liters annually, according to a 2013 report by BLOMINVEST titled “Lebanese Beer Market Yet to Brew.” Likewise, the range of imported beers available in Lebanon in the 1990s and early 2000s was dominated by Heineken, Corona, Efes, and Budweiser.

Craft beers were virtually unheard of in Lebanon up until 2006, when Mazen Hajjar and his partners started a microbrewery and introduced 961 to the market. (Mazen Hajjar has since sold his shares, and today the active main partner is Kamal Fayyad.) While 961 garnered a lot of attention at its launch, consumption did not pick up quickly: According to the BLOMINVEST report, 961 had only 5 percent of the total beer market in Lebanon in 2013. Speaking for 961 today, its Chief Commercial Officer Iyad Rasbey says local consumption of the beer is now at approximately 15 percent of total beer consumption in Lebanon. Rasbey explains that 10 percent of 961’s production is sold in Lebanon while the rest is exported to 12 countries across the globe, including the US.

Omar Bekdache, a former partner at 961 and current co-managing partner at Brew Inc., a brewpub in Badaro, believes the beer market in Lebanon was not mature enough back in 2006. “At that time, the majority of Lebanese consumers were not aware that there was such a wide variety of beers. Perhaps because of influence under the French mandate, Lebanese tend to drink more wine than beer, so our consumption of beer per capita is quite small when compared to most other countries, especially back then,” he recalls. According to the 2013 BLOMINVEST report, statistics placed the consumption of beer per capita in Lebanon at 5.5 liters, which is small when compared to average beer-drinking countries such as France or Italy (30 and 29 liters per capita respectively back in 2013).

Bring in the craft

Several developments have set the stage for a more dynamic beer market in Lebanon. 961 is unanimously credited with opening Lebanese eyes to the concept of craft beer. Bekdache believes it drove Almaza to diversify its beer varieties and to introduce Almaza Malt, a darker alternative to its ubiquitous pilsener, and later Almaza Light and Al Rayess beer.

When Jamil Haddad launched Colonel Beer in 2014, he says few people believed he would succeed given the small beer market in Lebanon. Haddad decided to go about things in a different way and focus on the experience as much as the product. “I focused on creating a concept around the beer, which included the beer garden, live bands, a transparent glass separated brewery, an ecofriendly setup, a bike station, a beach bar,” he says. “For me, a microbrewery should come with a concept and be an experience to succeed. When you come to Colonel, you come for the beer, as well as the experience, and this is very important.”

Haddad’s vision was realized, and today he says that Colonel, which has a capacity of 1,300 people, is full on weekends and very busy on weekdays all year long. Colonel has also made an impression among others in the industry: The Backroom’s Choueiry called the venue a “dream for a master brewer,” and Bekdache noted that “Colonel created a nice buzz around craft beer. Its setup and location really did a nice job, since they created something new.”

Kassatly Chtaura launched Beirut Beer the same year as Haddad’s Colonel, and while it is a commercial beer—not a craft one—it also played a role in expanding the Lebanese beer market. “Beirut Beer’s launch campaign was very aggressive, creating a beer buzz in Lebanon, while also adding a new variety of beer,” Bekdache says. “This variety makes consumers more willing to try new beers. I believe all this [vibe around beer] led to a bigger consumption per capita, and interest in beer. Once this interest started, distributors started looking into bringing more imported beer varieties to Lebanon.”

Rasbey says the craft beer market in Lebanon only really picked up three years ago, attributing the uptick to the young generation that travels a lot and is generally more willing to try new things.

The introduction of new beer brands in Lebanon and the explosion of the craft-beer trend in Europe and the USA—plus the Lebanese tendency to adopt trends from abroad—created an increased demand for craft beer in Lebanon. Spirit distributors took notice. “Although we don’t have a big beer culture in Lebanon, a growing number are enjoying craft beer. We acquired new craft-beer brands, and we sell them at The Malt Gallery and have a limited distribution of them in the on-trade,” said Anthony Massoud, the managing director and owner of Etablissements Antoine Massoud. (On-trade is the alcohol that is sold in restaurants, bars, and cafes.)

Through The Backroom, which is owned by Fattal Holding, Choueiry says he is hoping to grow the craft-beer trend in Lebanon and says Fattal is importing craft beers from Ireland to sell on site and to distribute in bottles as well. The problem with serving imported craft beer on tap in Lebanon, explained Choueiry, is that the equipment is expensive and most bars cannot afford it. Even the bottled variety of imported craft beers is considered expensive, with prices starting at $8 per bottle and going up to $16. While craft beer is globally more expensive than commercial beer, due to its artisanal nature and to the higher-quality ingredients used, in Lebanon the price of importing it is added to the mix.

Meanwhile, locally produced craft beer is also on the expensive side. Bekdache explains that the extra price is for the premium quality of the beer. “Doing something artisanal means you cannot do mass volume. For example, craft beers need 15 to 30 days to brew properly and be ready for consumption, while commercial breweries need three days. If I produce commercial beer,  I will have to compromise my quality and will have to sell at a lower price,” he says. Bekdache also explains that the extra overhead expenses unique to Lebanon (such as double electricity and water bills) drive his costs up further—which is reflected in the price. 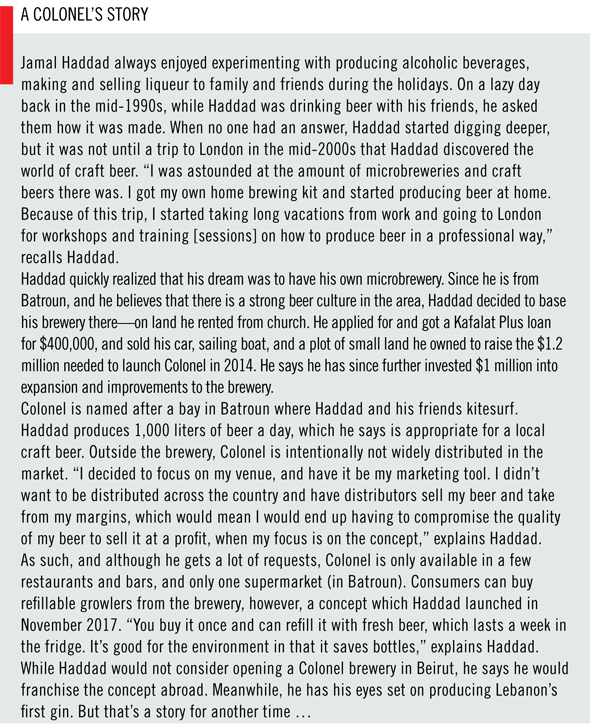