When restaurants and tech meet

Digital transactions ­— via websites or mobile applications — have become commonplace in everyday life. From shopping to booking a vacation, most tasks can be accomplished with just a few steps through an app — at least in more developed countries.

In Lebanon, those wishing to outsource such interactions to apps have fewer options, though this is beginning to change. With more apps and (functioning) websites on the market, consumers are now able to settle their phone bills or manage their bank accounts on their smart phones.

More recently, apps have begun to appear in the Lebanese food and beverage (F&B) industry. From booking a favorite restaurant online, to home delivery, to simply choosing which restaurant to dine out at, one can now easily satisfy a food craving with minimal human interaction.

From the world to Lebanon

As with many trends, online delivery and booking apps were common globally and regionally before penetrating the Lebanese market. For example, the online reservation platform Open Table was launched in the late 1990s in San Francisco. Talabat, an online delivery website and app, launched in Kuwait in 2005.

Despite Lebanon’s well-developed F&B industry, it took a little longer for these types of apps to make a mark here. Onlivery — an online delivery app — was one of the first F&B apps to be launched in the country in 2013, with others soon following suit.

By 2014, the market was more open to convenience apps, encouraging entrepreneurs to take the leap. “The first time I came back [to Lebanon] in 2011, I wanted to do it, but it was too early because no one had apps then. But now everyone has gone digital, even the banks have apps and everything, so I felt the appetite was there and it was the right time to launch,” says Aoni Ahdab, who launched Wizmates, another online delivery app, in 2017.

Zomato, a restaurant search and discovery startup founded in India with a global reach of 23 countries, also saw potential for their app in Lebanon’s F&B industry. “It’s a small market compared to India and other markets, but it is [also] a very food-centric country, and eating is one of the main activities in Lebanon,” says Bechara Haddad, country manager of Zomato Lebanon, explaining that, for example, all of Portugal has around 12,000 F&B outlets while much smaller Lebanon has around 10,000.

Some of these apps, like Zomato, or Reserve Out, an online reservation platform launched in Amman by a Jordanian American, were active outside of Lebanon before entering the local market. Others, such as Wizmates or Onlivery, were developed in Lebanon, but inspired by successful international models.

In that sense, these app founders have not reinvented the wheel, they have simply tailored a global product to a Lebanese clientele. “We’re not innovative, but we proved the concept in a place where no one had before. We have a solid business model and growth plan because we know where we are going, and we know this is going to work because it’s been proven outside,” says Daniel Kofdrali, founder of Onlivery.

What’s in a buck?

Finding funding is challenging for tech entrepreneurs in Lebanon, so getting off the ground was not easy for these homegrown apps. “Funding in Lebanon is very hard [to get] and takes time, and this is why we are getting funded from Europe. In Lebanon, it can take six to nine months after your funding is approved [to get the money], and some startups can’t last that long,” says Kofdrali. He wishes that investors in Lebanon would be a bit more aggressive and a bit less traditional, and asks them to believe in the region, rather than wait for an international acquisition before they take interest.

Being part of a company with international reach has its perks. “Being part of a global startup is an advantage for us because we have faster access to funds. I know a lot of local startups who spent  their own money while waiting for the papers to be completed or for compliance issues in the banks to be sorted out and this affected their business and continuity. When we needed funds, we asked our HQ for them and it got done in a few days; our investor is basically Zomato HQ India,” says Haddad, explaining that Zomato Global was funded by Info Edge Limited, Sequoia Capital, VY Capital, and Temasek.

Starting at the very beginning

Even as banking and mobile top-up apps are being used more and more frequently by Lebanese consumers, there is still some reluctance to trust technology over good old-fashioned human contact.

In fact, most of the developers and founders Executive talked to mentioned changing consumer habits as a challenge they faced when they first entered the market. “In Lebanon, one of the issues we tackled is that some people don’t really trust technology and prefer to talk to a human. We tackled this issue through the push notifications that provide reassurance to customers that their order has been received and is being executed,” explains Wizmate’s Ahdab.

At first, Reserve Out also faced some difficulty in encouraging users to book tables online, but having a presence in the region helped. “In Lebanon, we have all kinds of customers. There are those that still prefer to call and reserve and those who prefer to book online. In Dubai, everybody is open to online booking and many prefer booking online, which is great because when they travel in the region, including Lebanon, they can use the app as well,” says Moussa Rida, country manager of Reserve Out Lebanon.

Kofdrali recalls struggling with restaurant operators when entering the Lebanese market. “It was very hard to convince the big players of its worth when we first started. They weren’t convinced that we were going to get them a large volume of orders, and they weren’t convinced that we would give them the kind of customer service that wouldn’t jeopardize their brand name, but we proved ourselves and paved the way for newcomers,” says Kofdrali proudly.

Despite hesitance from older consumers, F&B apps in Lebanon found an almost immediate audience in the younger crowd. The app founders Executive spoke with say those between 18 and 35 years old readily welcomed their products.

For those who were still unsure, incentives have been used to pique their interest and convince them to at least try the app once. “Those who lived abroad, or who are tech savvy and familiar with this type of app, will use it without any prompting, and then you have those that are reluctant to use it. But what attracts those customers is the exclusive deals and offers that are only available through our app and the ability to order from restaurants that do not have delivery services,” explains Ahdab.

Other apps also use rewards to encourage engagement. Rida explains that users get a certain number of points once they download the app and gain points with each reservation. Once they reach a specific number of points, they can redeem them as money to pay for their meals.

Kofdrali says they invest heavily in marketing Onlivery, through campaigns and competitions to raise the app’s visibility among consumers. “It is a challenge to market this in Lebanon, and this is why we are happy there are other apps. Competition is good from a perspective of helping create awareness. Today we are reinvesting every dollar into marketing; if they [the other delivery apps] help me in marketing, this shortens the distance for [all of us],” he explains.

According to Kofdrali, once a user orders through Onlivery two or three times, they are hooked and become repeat users, Ahdab also says that 90 percent of Wizmates’ customers are repeat users. It seems that these little incentives have been key to creating new habits. 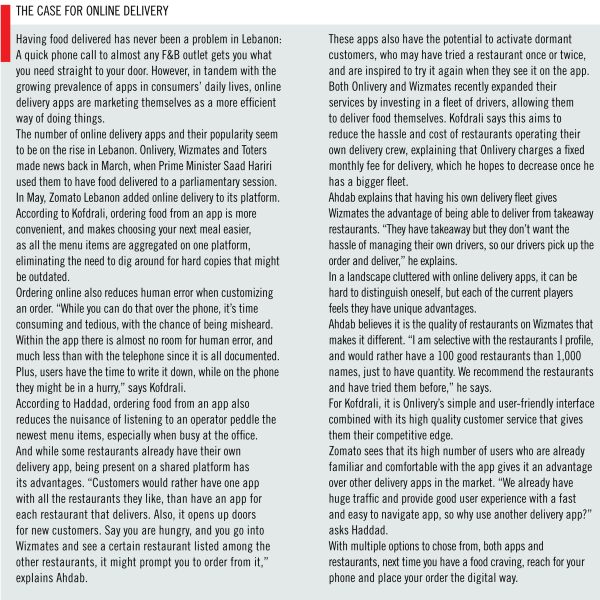 A few years into their operations, the F&B apps active in Lebanon all say they have profitable business models.

Reserve Out makes its money through a fixed fee it takes from participating restaurants on bookings, and from a table management software which it sells to restaurants. “Restaurants pay a monthly fee to utilize the Reserve Out reservations and table management system, which also includes all support, training and future software updates. We also charge a fee per reservation (depending on the number of people who reserved) if the reservation materializes: when the restaurant makes money, we make money,” says Rida explaining that both aspects of the business are profitable.

Zomato spent the first four months of operation in Lebanon getting restaurant menus, GPS coordinates, pictures, and phone numbers before going live, then the focus turned to increasing consumer engagement with reviews and photo uploads. Once they had enough users and traffic, they started to generate money. “We started as a restaurant directory, and once we gathered enough users and enough traffic, we were able to sell advertisement spots (on the platform) to restaurants to promote themselves. But the prices were proportional to the number of users we had back then. We review our prices and zones constantly, to adapt to market demand and zones’ web and app traffic,” explains Haddad.

Both Onlivery and Wizmates take a commission or percentage from each delivery made through their apps. Onlivery, which has started its own delivery fleet, takes an additional commission from restaurants that have subscribed to their service.

The size of the market in Lebanon could be limiting to app founders with big ambitions. “The market is small, so you can never make it big if you stay in Lebanon. But for us, we wanted to start from Lebanon because it is our home, and we believe in it and want this to be a Lebanese app. We have a plan to expand [outside of Lebanon] and are working on it very seriously,” says Wizmate’s Ahdab.

Regional player Reserve Out, which has reach across seven cities in the Middle East, also has further expansion in mind. Rida says that they have already signed an agreement with a big restaurant chain in Tokyo; Turkey and Egypt are also on their radar.

None of the F&B apps operating in Lebanon have completed their domestic expansion yet — all say they want to cover more areas across the country. “We want to expand in the Lebanese market as well, to areas which are beautiful but not as exposed online, such as in Sour or the north, where there are very good restaurants with little publicity. I would like to collect all these restaurants so they have coverage abroad and in Lebanon as well,” concludes Rida. 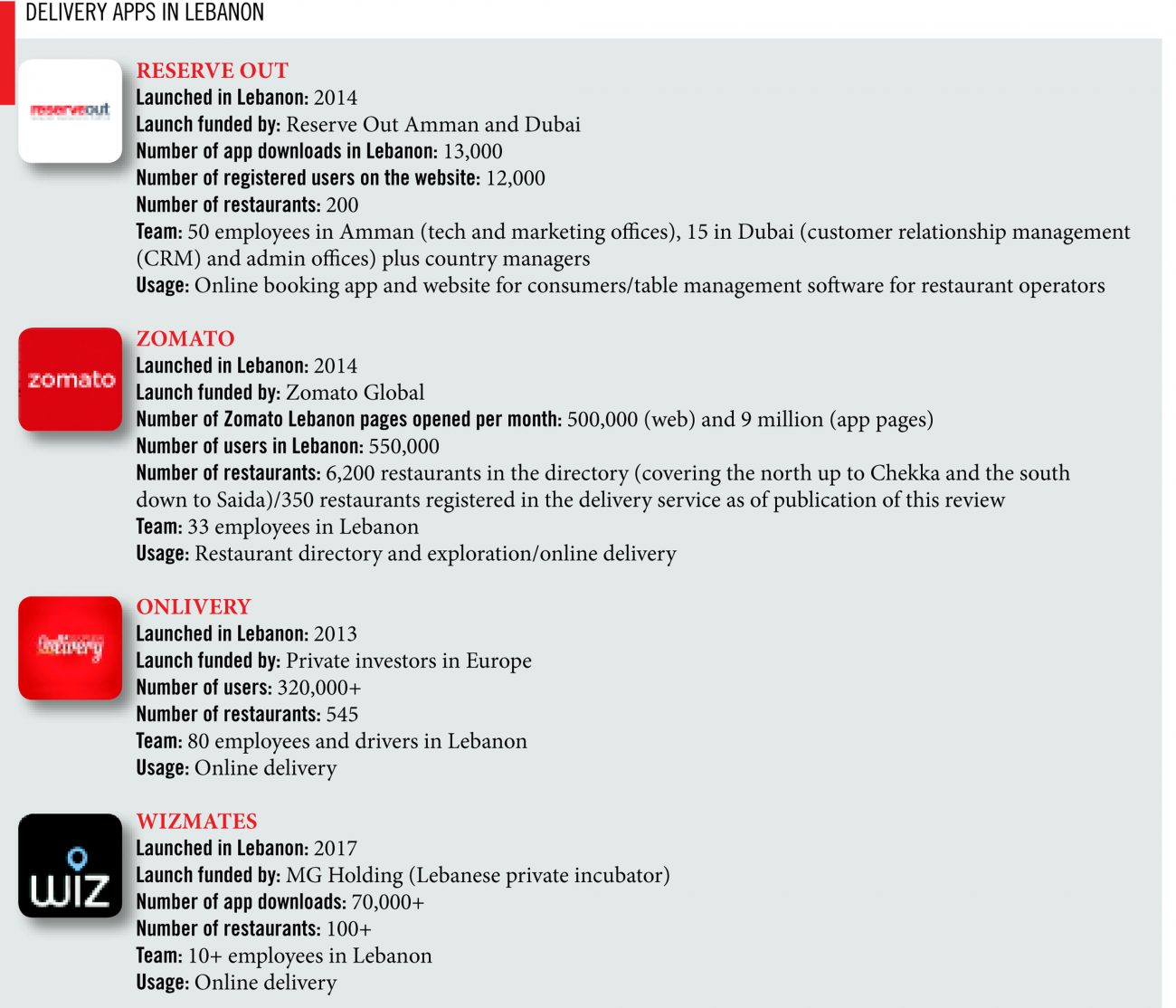