Home Hospitality & Tourism It’s all in the packaging

It’s all in the packaging

Whoever tends to have food delivered by one of the many Food and Beverage (F&B) outlets in Lebanon will have grown accustomed to the sight of heaps of plastic or cardboard containers, boxes, bags and utensils used to package and serve their meals and meal accompaniments, all designed to deliver the food in an efficient, convenient and aesthetically pleasing way.

Accentuated by the recent waste management crisis engulfing Lebanon, customers are often left feeling uneasy at the sight of so much trash being generated simply by having meals delivered. Some restaurant operators in Lebanon have felt the same, understanding that they are contributing to the problem by generating so much plastic waste through packaging. As a result, some have wisely chosen to use ecologically friendly packaging instead.

Inspired by the recent surge of interest in recycling, upcycling and reusing in Lebanon, Executive talked to two restaurants who use eco-friendly packaging in their delivery and in-house services to discover what sparked their interest in adopting these practices, what difficulties they have faced and what the customer response has been thus far.

Bento, meaning lunchbox in Japanese, is a contemporary international cuisine restaurant next to the Adlieh roundabout which opened four months ago and is the brainchild of Joyce Badran, an engineer with a background in environmental sciences. Bento is Badran’s first venture in the F&B business, grounded in her passion for cooking with a menu developed based on inspiration from her world travels. 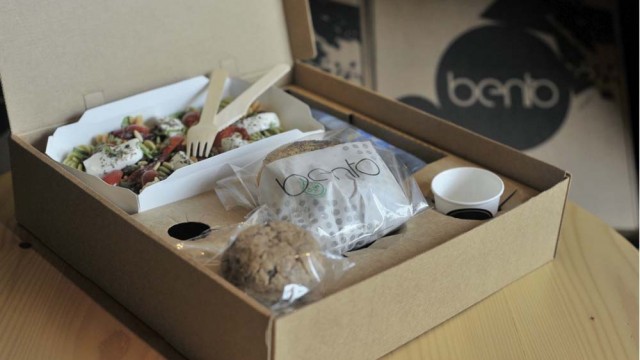 The core of Bento’s operation is its delivery service and as such Badran has given a lot of thought to packaging. “I focused on packaging because I used to order a lot of food when I was working in Lebanon and everything used to arrive in plastic. I didn’t like that and felt bad throwing so much unrecyclable plastic away. So I worked on finding packaging that can be recycled,” says Badran.

Bento’s salads, appetizers and soups come in recyclable heavy duty carton while the utensils are made of wood. Sandwiches and bagels come in biodegradable plastic bags and all meals are delivered in kraft paper boxes and bags. The only items Badran uses plastic packaging for are the hot dishes such as pastas, since the only carton containers for hot dishes she was able to find in Lebanon leaked while on delivery to customers.

Claude Berti, owner of Jars & Co, is a jeweler by profession with no prior experience in F&B before the launch of Jars & Co in Monot, Ashrafieh, over a year ago. While Berti was browsing online, she was inspired by the different uses for glass jars and came up with the idea of serving salads in jars. “Eating salads out of a jar means that people can shake it, thus mixing the dressing with the entire salad and having the salad items properly mixed together instead of having to eat each item alone,” says Berti, adding that another bonus is that the jars are eco friendly, an aspect that solidified her decision to use them for her new F&B concept. 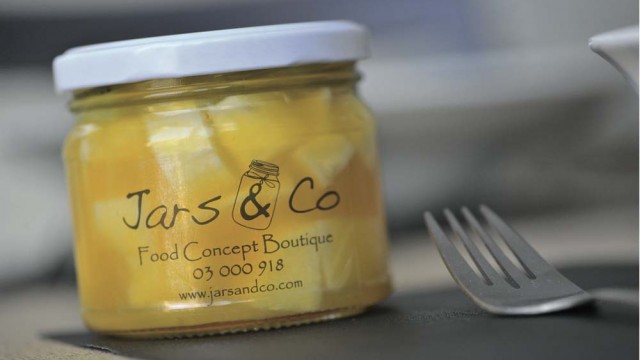 From salads, Jars & Co developed into having all kinds of food items served in jars, including pasta and appetizers. Environmentally friendly packaging continued with other items on the Jars & Co menu, such as bagels and wraps delivered in kraft paper and jars and the delivery bags also made of kraft paper.

Recently, and in an effort to encourage further recycling and reusing, Jars & Co launched a loyalty card system whereby if customers return six jars, they get a salad for free. The returned jars are sterilized and then reused. Customers who instead choose to keep the jars find many alternative uses for them in their daily life.

Both Berti and Badran explain that since the concept of eco-friendly packaging is not common in Lebanon, they had difficulty locating the right suppliers for their needed items. While globally, trends and ideas for environmentally friendly packaging are well developed, in Lebanon the efficiency and cost effectiveness of plastic packaging still triumphs, explain the two ladies.

Berti says it took her three months to locate a supplier who would be able to consistently provide her with jars with the exact dimensions she wanted, while Badran recounts how she had to bring the first supply of wooden utensils – 2,000 pieces – with her in a suitcase from France as she wasn’t able to locate a supplier for those items in Lebanon at first. “I met hundreds of suppliers who didn’t have what I wanted so I got the wooden utensils from abroad instead. Eventually I met with a supplier in HORECA who was able to get them for me,” says Badran.

The price of helping the environment

Badran says wooden utensils are three times more expensive than plastic ones and both ladies agree that their packaging is at least slightly more expensive than the plastic variety. Yet, their food items are priced on a par with other restaurants of the same quality (a salad at Jars & Co costs a maximum of $10 while a gourmet sandwich at Bento is priced at an average of $7).

To compensate for the slightly more expensive packaging, Berti explains that the novelty of serving food in a jar, coupled with the do-good feeling of being kind to the environment that comes with ordering from restaurants with minimal packaging, brings an increase in customer traffic and therefore revenue.

While those with an environmental consciousness have supported and encouraged the two restaurants from the start, both owners agree that the recent increase in awareness about the dangers of excessive waste generation has attracted more business and support for enterprises such as their own.

“The Lebanese are now more aware of the damages that unnecessary packaging have on the environment and almost 90 percent of my customers are actively voicing out their support for the packaging I use,” says a pleased Badran.

Although some people are still not used to the idea of using wooden utensils, accusing them of having a strange taste, or to carton and paper packaging thinking it looks cheap, Badran says she ignores such comments as she is focusing on the long term towards the future wellbeing of the planet.

Being environmentally friendly is not a passing trend. As the Lebanese move towards an increased awareness of the importance of protecting their land by recycling, reusing and upcycling, Executive hopes to see more restaurants and other F&B outlets take the environment into consideration when it comes to waste generation.

New technologies are emerging in biodegradable plastics, these plastics are made by corn plants, which have high concentration of starch which bonds the plastic. I wish I saw numbers in the article indicating how environmental friendly wooden utensils and paper packages are. After all you do cut trees to make them. From the image with the box, I can see excess cardboard used, along with unnecessary packaging for smaller items. This looks to me like a luxury meal on an business class flight. The most environmental friendly option is to package your food at home in reusable containers, or have a meal at a restaurant or a cafeteria which use rewashable dishes. The options explained in the article might be more environmental friendly, but maybe not environmental friendly enough, especially is a place like Beirut with limited landfill capacity where their is a possibility that these packages end up decaying on the street, thus defeating the purpose of being green. Brand names sell, customers feel good for the misconception of saving the environment. It’s time we start changing bad habits.

I totally Agree with what Ibrahim is saying! Ibrahim, could you please advise how to connect with you. There is something that we would like to discuss with you.