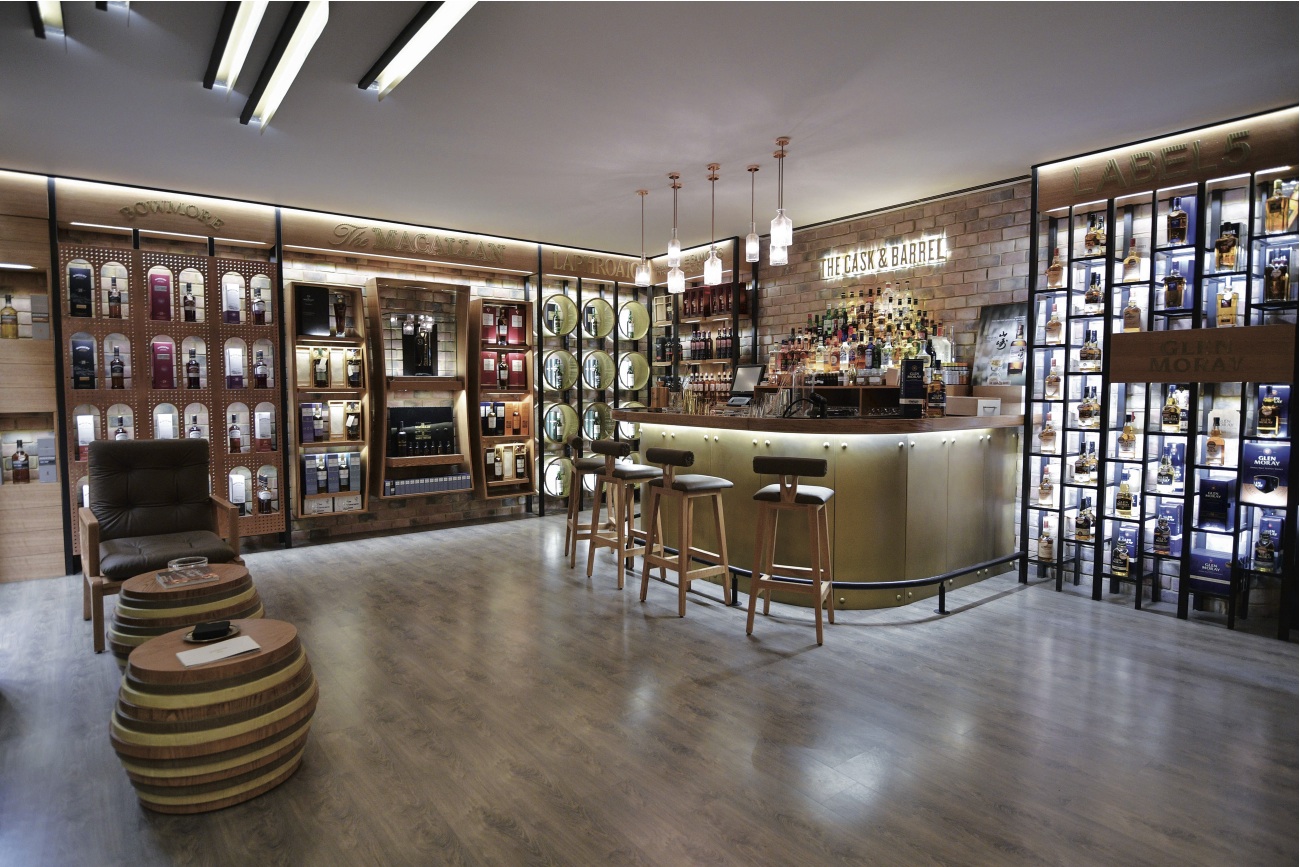 Whether it’s a vodka cocktail while dancing at a club, a glass of wine over dinner, a single malt paired with a cigar after a long day, or even arak to go with the Sunday mezze spread, alcohol is often a significant aspect of the lives and habits of many Lebanese.

And while every individual has a preferred poison, the global drinks market still promotes popular spirits and creates worldwide trends that will eventually make their way to Lebanon’s consumers.

Executive met with some of Lebanon’s major spirits distributors to learn more about their achievements the past year as well as the latest trends and consumption habits in the world of booze.

Toasting to a good year

While acknowledging that 2016 had been a tough year in general for the economy in Lebanon, all the distributors Executive spoke to reported double digit growth in their spirits sales in spite of national and global market stagnation.

Two years ago, EAM launched The Malt Gallery, a specialized whiskey and premium spirits retail outlet that sells EAM’s brands as well as those of other distributors. Massoud says the liquor store has contributed to EAM’s growth, explaining, “In our spirits portfolio, we have two components, which are the distribution stream and the retail stream (The Malt Gallery). They are both growing.”

Gabriel Bocti and Diageo Middle East North Africa (MENA) say growth in their companies was in part due to security stabilization in Lebanon toward the second half of 2016 that led to an increase in expatriates and tourists visiting the country. Ziad Chami, head of marketing at Diageo explains, “When a lot of people are coming into the country it is better for our industry in terms of on-trade consumption as most venues were fully booked. This is positive for the tourism economy, and, as a result, positive for us as well.”

Meanwhile, Carlo Vincenti, CEO of G. Vincenti & Sons, ascribes increasing growth in spirits to their acquisition of six major brands. In addition to acquiring the distribution rights for No. 3 Gin and Angostura Rum (the brand was already present in the Lebanese market but with another distributor and in its bitters category only), Vincenti took over the distribution of The Edrington Group’s national portfolio, which includes the blended whiskey Famous Grouse, the single malt Highland Park and the high-end single malt The Macallan.

Usually spirit distilleries have long term relations with their local distributors, this has been changing recently.According to Vincenti, The Edrington Group switched distributors because they felt their brand vision aligned with that of G. Vincenti & Sons. Vincenti confirms, “Knowing the capabilities of Vincenti in marketing and distributing brands, they see it as more fitting their own vision and perception of their brand.”

However, this growth in 2016 was not across the board, and some spirit categories in fact declined in market performance. According to Vincenti, national sales of standard and non-premium blended whiskey consumption have been slumping for the past four years, with consumers being more in favor of bourbon or malt whiskey. While some distributors reported a growth with their vodka brands, others said sales were dropping because vodka consumption is largely associated with nightclubs as opposed to at home or cocktail bars, which was still a growing trend in Lebanon in 2016.

Division Manager at NeoComet, KFF Food & Beverage’s spirits distribution arm, Tony Mazloum, told Executive that although standard blended whiskey continues to outsell other whiskey categories, the company has started to invest more in high-end and premium brands. Malzoum explains, “Our goal is to stabilize the existing business, which is the standard whiskey. [Those brands] still [represent] the biggest share of the market although their share is decreasing as people are shifting to premium, and this is where we are spending our budget for marketing and communication.”

The fastest growing segment of whiskey is single malt

With the world becoming more of a village, global trends in spirits are finding their way to Lebanese consumers a lot faster than ever before, says  Jeanine Ghosn, managing director of Gabriel Bocti. Mazloum agrees, explaining that young Lebanese are consuming more gin as they buy into a global trend that sees this spirit as a healthier option due to its botanical ingredients.

Ghosn believes that in parallel to its global popularity, the rise of gin consumption in Lebanon is a result of an increase in cocktail bars across the city. These bars create a lot of gin-based cocktails and as a result “the bartenders became our brand ambassadors,” she explains, adding that their gin brand, Hendrick’s – which they introduced in 2012 – has seen triple digit growth.

Chami also reports that Diageo has seen growth in their gin sales, but adds that this growth is measured from a nationwide low baseline. He confirms, “Gin is of a much smaller base when compared to whiskey or vodka, but it is growing. We do see gin being a fast growing segment, driven by cocktails such as gin basil.”

With the success of specialized retail stores such as The Malt Gallery, boutiques such as The Cask and Barrel or even events such as Whiskey Live (a whiskey tasting event that took place on December 2016 at Le Yacht Club that was attended by approximately 2,000 consumers), it is easy to believe that the biggest market growth of 2016 was in the sales of premium and single malt whiskey.

All distributors Executive spoke with reported significant growth in their single malt brands. While Massoud says they started to notice an increase in single malt consumption as of 2008, the category truly spiked two to three years ago. “The fastest growing segment of whiskey is single malt, but it is also coming from a much smaller base. Single malt consumption in Lebanon represents 1 percent of the whiskey market but there is increasing demand on it as whiskey drinkers become more discerning in their tastes,” explains Chami.

According to Massoud, the single malt’s popularity is part of a global trend toward the “premiumization” of spirits. “Worldwide there is a trend in alcohol toward premiumization, meaning drinking alcohol which is perceived to be better. While in vodka it is translated into visual details such as the bottle design or texture of liquid, in wine or malt whiskey you have history, craftsmanship and variety of production that is astounding. As such, single malt, because of premiumization, was the natural evolution of whiskey drinkers,” explains Massoud.

Vincenti believes that malt whiskey is causing an uproar because of its complexities when compared to other spirits rather than simply being a new market trend. “While there are different spirit trends going on, they don’t stimulate interest as much as single malts because the single malt category is so rich in history, production and education. You would rarely see this hype over gin, for example, although premium gin is a category that is increasingly consumed in Lebanon.”

In the past, drinking single malt whiskey was somehow seen as stuffy, but Ghosn explains that distillers such as those of Glenfiddich have worked to create new niche markets. “We tried to break the ice with the consumer and communicate the message that you drink malt the way you like it. It’s true that there are ways to make malt consumption more enjoyable but in the end you drink it the way you like it and there are no rules,” she says, adding that this has led to more young adults discovering the pleasures of drinking whiskies such as Glenfiddich. Vincenti agrees, explaining, “Today, young consumers are looking for an alternative whiskey choice and don’t want to drink the whiskies of their fathers and grandfathers. They want a whiskey that is more identifiable to their lifestyle and image, which is the bourbon category since it is much smoother and easier to drink, and opens a wide variety in that you have different tastes for different moods.” He gives the example of Jim Beam premium bourbon that comes in different flavors such as Jim Beam Honey or even Jim Beam Apple, which is particularly suitable for summer and easier to drink.

Capitalizing on young adults’ desire for new experiences, Mazloum says Fattal is introducing innovative ways to promote their premium whiskey brands that would appeal to their age group. “To win over new consumers, keep up with the trends and grow the business of Scotch, we moved over to mixology. We are introducing cocktails that use single malt and premium whiskey through initiatives that bring it closer to millennial consumers,” enthuses Mazloum, giving the example of their Scotch Egg Club, where food is paired with whiskey at an event to which they invite young bloggers and influencers.

According to Massoud, the wide variety of single malt whiskies at the Malt Gallery means consumption is reliant on the mood of the moment and specific brand names have therefore become less important. “While it is important to have brands, and we do so, single malts are like wine in that they are more about the mood and the moment. It is interesting because we get to see consumer habits, and we noticed that when it comes to whiskey, the consumer is all about variety. They rarely stand by just one brand, because taste evolves as the drinker matures in age and experience,” explains Massoud.

For Vincenti, premium whiskey consumption mostly takes place at home, adding that,“Because 50 percent of malt whiskey consumption happens at home, presence in off-trade through specialized shops or displays in supermarkets is important. Single malt is really strong in social home gatherings as it’s a sign of prestige where you honor your guests by sharing a special single malt with them.”

Similarly, Ghosn says gifting premium and malt whiskies accounted for a big percentage of their sales in December 2016, highlighted by their presence in specialized retail shops. “We don’t cater just for on-trade, the big chunk of the business for us is in retail. The developments in the upper trade (specialized retail shops) are a great vitrine for us, especially now that there are a lot of events at home, due to the fact that purchasing power among locals is low,” says Ghosn, explaining that a bottle of premium whiskey at a retail shop would cost less than it would at a restaurant or bar.

All distributors Executive spoke with believe there is big potential for malt consumption to grow even further in Lebanon, but such growth depends on educating the consumer.

Both Vincenti and Massoud say that the main reason they opened their specialized whiskey venues is to promote the single malt world through master classes and tastings. “There is a growing interest among Lebanese consumers for single malt, and although their percentage remains small, it is our mission is to make it the biggest possible through education,” says Massoud, explaining that while in distribution they focus on their brands, in The Malt Gallery, their aim is to enhance the single malt category in Lebanon as a whole.

Although The Cask and Barrel has only been open since September 2016, Vincenti says they have been “overwhelmed with feedback” about the boutique, which only showcases Vincenti’s spirits. “Consumers are receiving a lot of education right now, which is what they need. Through our Cask and Barrel premium boutique we have been holding weekly master classes and whiskey tastings. We have different formulas for people to come in and learn more about the single malt world. It’s a huge diversified world that the Lebanese are eager to discover,” enthuses Vincenti.

Still, whether it’s savoring a glass of single malt, sipping a glass of wine or enjoying a cold beer, one thing is for certain: you will surely find what suits your tastes in Lebanon. 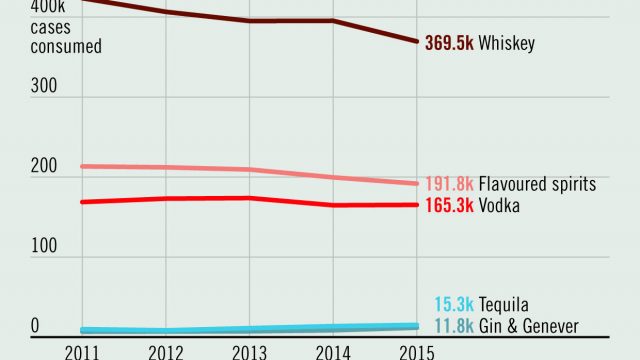 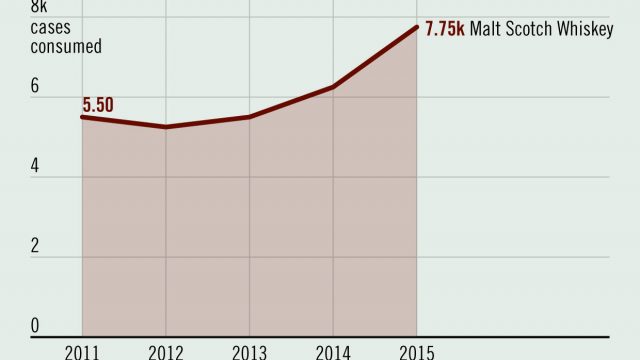