Slicing up one of the most popular cuisines in Lebanon

Back in 2003, T-shirts with the slogan: “Sushi: Traditional Lebanese Dish” were spotted being worn by young fashionistas across Beirut, illustrating the glowing success of this staple Japanese dish in Lebanon.

Thirteen years later and the Lebanese passion for sushi does not seem to be ebbing away. On the contrary, the estimated number of restaurants serving sushi in Lebanon has to date reached close to a hundred individual outlets.

Japanese cuisine has been present in Lebanon, to some extent, since the 1980s. First through the restaurants Tokyo in Manara, which was operated by a Japanese woman, and Nippon Mare in Jounieh, according to Nicolas Rebeiz, partner and managing director of the seafood and sushi restaurant and supplier Oceanus, who adds that these restaurants were not focused on sushi.

Aref Saade, owner of Tropical Bamboo, a company which offers supplies, consultation, menu development and recruitment for Asian cuisine restaurants in Africa and the MENA region, recalls that when he returned to Lebanon from Saudi Arabia in 1992, sushi was not common in Lebanon, despite it being a global trend. At the time, Chinese cuisine was more in demand.

Slowly, says Saade, young expats returning to Lebanon from Canada and America who had tried sushi abroad began asking around for it, prompting restaurateurs to open their eyes to this opportunity. In 1995, Boubess Group decided to open a Benihana restaurant in their Commodore Hotel and utilized Tropical Bamboo’s services, serving sushi as well as the teppanyaki that Benihanas are globally known for.

But it was with the opening of Le Sushi Bar in Ashrafieh that the sushi craze took flight.

Mario Junior Haddad, who hails from the cinema business, decided to open Le Sushi Bar in 1998 out “of a passion for food” and because there were no restaurants at the time “that focused solely on sushi even though it was an international trend.” He explains that his concept was a bar where people would sit around the chefs and be served sushi that had been prepared in front of their eyes.

Haddad recalls that restaurant openings were not as common as they are today, so people flocked to Le Sushi Bar to discover the new outlet as well as the new concept, generating quite a buzz. “It hit a chord as well because the place was unusual and worth discovering,” says Haddad. 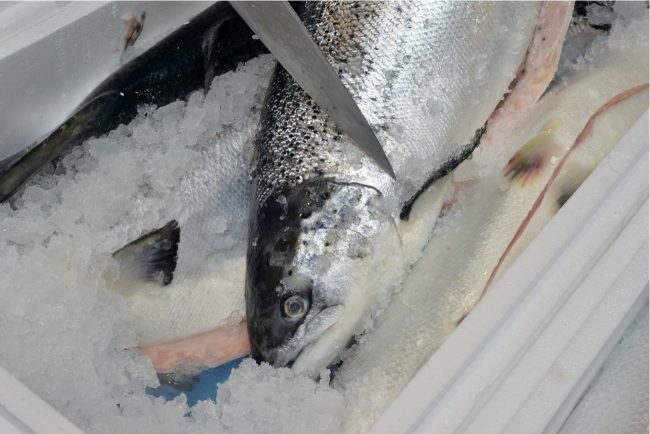 For the love of rice and raw fish

Indeed, these days sushi in Lebanon can be found on many a menu, including international cuisine restaurants or coffee shops, and can even be consumed alongside your argeeleh in a Lebanese café or bought pre-packaged at some local supermarkets.

Rita Ekmekjian, co-owner of the sushi restaurant Tsunami which has four outlets across Lebanon, says that when they first opened Tsunami in Kfardebian, Faraya, in 2003 (the outlet was closed two years later when they moved to the busier area of Ashrafieh) there were only nine sushi restaurants in Lebanon. Today, she estimates the number has grown to 75 pure sushi outlets in Lebanon. If you include the cafes and catering companies which serve sushi, as well the individual branches of chain sushi outlets, Adada places this number at 150.

These sushi outlets are mainly concentrated in Greater Beirut and Mount Lebanon with only a few outlets in the North and South of the country, says Alain Haddad, sales manager at Royal Gourmet, a wholesale supplier of fish used in sushi (mainly salmon), adding that his company only supplies two sushi outlets in Sidon, for example.

In parallel with the increase in outlets serving sushi is the increase in suppliers of dry goods and raw fish used for sushi. “At first there was only us supplying the ingredients, the consultation, menu development and chefs for Japanese restaurants from 1992 to 1998 when we stopped our supplying activities in Lebanon to open Shogun,” says Saade who currently owns two Shoguns in Lebanon and a few others in the region while running Tropical Bamboo in the countries where Shogun is not in operation.

[pullquote]In 2003 there were only nine sushi restaurants in Lebanon. Today, the number of pure sushi outlets has grown to 75.[/pullquote]

Le Sushi Bar’s Haddad estimates there are 10 to 15 suppliers of sushi related items today, refuting the popular notion that only one or two companies supply all sushi restaurants in Lebanon. Saade adds that existing food product suppliers also began importing sushi related products when they saw the increased demand for them.

Adada explains that, just as with any other cuisine, choice of supplier would depend on the ingredient, adding that at Yabani they sometimes work with different suppliers for the same ingredient so as to ensure a continuous supply and also to maintain good relations with all suppliers. 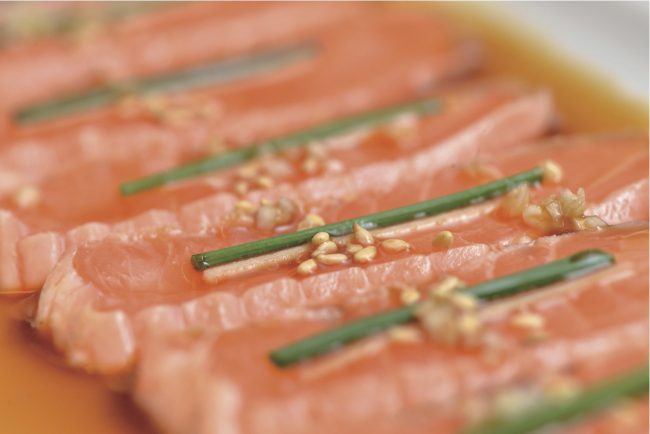 Sushi has indeed become one of the most prevalent foods in Lebanon. According to Saade and Haddad, one of the reasons for sushi’s popularity in Lebanon is its perception as a healthy cuisine. Ekmekjian explains that sushi remains a global trend and since Lebanese generally follow trends, they continue to enjoy sushi. She adds that since traditional Lebanese cuisine includes raw meat, the idea of eating raw fish was not too much of a transition, culturally speaking.

Adding to sushi’s popularity is its availability across all income brackets, with restaurants serving maki as low as a dollar a piece and as high as ten dollars a roll for the rarest items.

As Le Sushi Bar’s Haddad puts it: “I think it overflowed the boundaries of the elite; everybody wanted to eat sushi, and this is why a lot of places have mushroomed at all levels and they are all working.  It’s democratized, just like burgers,” he says in answering the question of why sushi is so popular in Lebanon.

Having sushi for a dollar a piece, especially when raw fish is involved, sounds risky to many. However, as Saade puts it, not everyone can afford the high-end variety while everyone wants to enjoy sushi. “People want to eat sushi and those who can’t afford it will go for the cheap option of a dollar per piece,” he says adding that in all cases, consumers’ main concern should be hygeine and cleanliness when it comes to consuming raw fish.

Saade, who is also the treasurer of the Syndicate of Owners of Restaurants, Cafes, Night-clubs & Pastries in Lebanon, says that at the onset of the food safety inspections in restaurants initiated by Minister of Health Wael Abu Faour, along with the Ministry of Health and Boecker and GWR Consulting (two companies specialized in food safety), hard work was put into ensuring that Lebanese sushi restaurants were in line with hygiene standards, organizing food safety and preparation seminars across the country as well as encouraging them to send samples of their fish in for inspection.

While low cost sushi and maki might not make you ill, there still is often a big difference in the quality and taste between them and the more expensive sushi.

To begin with, restaurants can decrease costs by using lower quality dry ingredients, such as substituting Japanese rice with Egyptian rice, according to Saade, or using Chinese dry goods (such as seaweed or vinegar) which are also cheaper, according to Fady Achkar, co-owner of Mitsu-Ya, a high-end sushi restaurant in Gemmayzeh.

Such lower end restaurants can also use larger quantities of rice, avocado and cucumbers than raw fish, thereby appearing generous but stuffing clients with the cheap items, explains Rebeiz. Another cost cutting technique which some restaurants employ is to use frozen instead of fresh fish, explains Adada.

Achkar, who also supplies major supermarkets in Dubai with packaged sushi, calls sushi made from frozen fish “fast food” and explains that it relies on four main and comparatively cheap fish. “They use crab sticks or imitation crab, mayonnaise, avocado, cucumber, treated tuna which comes in fillets, salmon and frozen shrimp, which people love. But, you have to stick to these four products. There is nothing wrong with it, but it’s different quality and not comparable to authentic sushi,” he says. 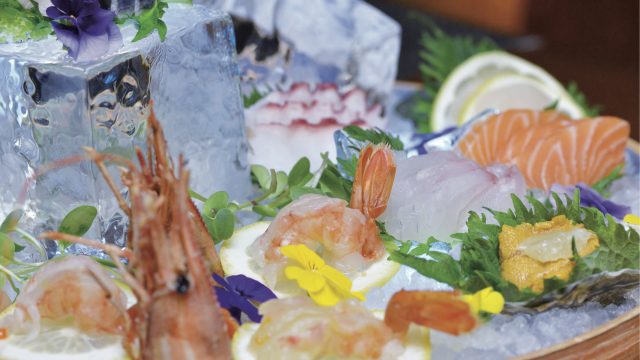 All fish are not created equal

Even among those four items, the standards of sushi, and therefore prices, differ according to the quality and cut of the fish. The most important factor when it comes to fish quality is its freshness, according to Haddad of Royal Gourmet, who explains that they receive four shipments (by airplane) of salmon per week with some restaurants buying from them on a daily basis. Salmon wholesale prices range from $13 to $20 per kilogram for a whole fish, depending on the cut and country of origin, and around $25 per kilogram if cut and cleaned by the supplier into fillet chunks.

While the restaurants Executive spoke to all said they use fresh fish, a lot of the fish used in Lebanon, especially tuna and eel, is frozen for cost efficiency, although the taste is sacrificed. “A kilo of fresh tuna is $30 to $40 while you can get it at $20 frozen. It is more cost effective that way for them because the fresh tuna is three to four kilograms while with frozen tuna, one can buy smaller portions and defrost them, which is good because tuna can quickly darken and go bad,” explains Haddad, adding that Royal Gourmet sells only fresh tuna, mainly to high-end sushi restaurants with a high turnover.

The type and cut of fish also varies with different prices for the belly and under belly of the tuna, which are the more expensive parts of the fish since they are fattier and less chewy, explains Saade. He adds that while the Bluefin tuna is the best type quality wise, it is the yellow fin tuna that is most used in sushi restaurants because it is less pricy.

Whether it’s from the low or high-end variety, or whether packed with rice or made up of only slices of raw fish, it seems the sushi craze is in Lebanon to stay, rivaling hummus and tabbouleh as some of Lebanon’s favorite foods.

What’s in a nationality?