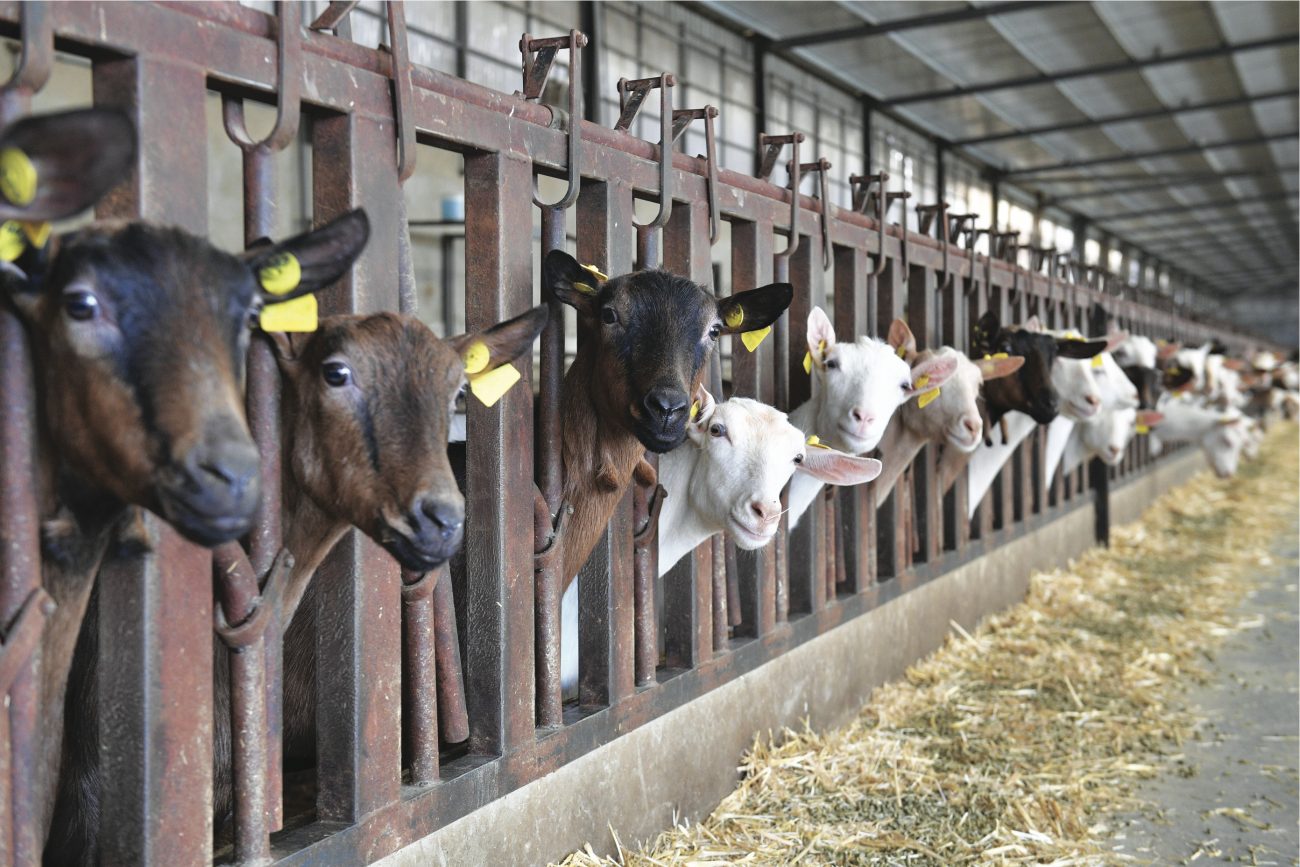 Goat dairy production has a long history in our part of the world. Archaeological evidence suggests that goats were the first dairy animals to be domesticated, sometime between 9,000 and 8,000 BC in what is today Iraq and Iran. Goat milk was also mentioned in the Bible, with the prophet Abraham owning herds of goats, and the Book of Proverbs speaking of the animal’s ability to produce milk.

The dairy market later shifted to cows, and is today globally and locally dominated by the larger mammal. The relatively recent trend toward healthy, clean foods and the rise of food allergies, however, has brought goat milk back under the spotlight. The global market for goat cheese products is growing slowly but steadily, and Lebanon’s dairy producers have been quick to take part.

Nomadic goats are traditionally bred in Lebanon’s mountainous areas. Villagers use their milk to produce cheese and kishek (a dry cheese) for the national market and occasionally, international distribution.

Mazen Khoury, the production manager at Dairy Khoury, one of the leading dairy producers in Lebanon, says his family business has been producing goat yogurt, labneh (strained yogurt), and baladi (local) cheese (a type of white, round cheese also referred to as green cheese) since the 1970s. However, according to Khoury, nomadic goats—the only goat variety found in Lebanon at the time—produce milk only seasonally, so Dairy Khoury’s production was limited to the period starting in February and ending in August at the latest.

As such, a steady and consistent business revolving around goat dairy products was not feasible in Lebanon until 2005, when Jihad Daher, the technical manager of and partner in Goût Blanc, used personal funds and a loan from Kafalat to import 60 dairy goats from France with the purpose of providing a consistent supply of high-quality goat milk to the country’s dairy producers.

A goat by any other name

The goats imported by Daher were Saanen, a Swiss breed, and Alpine, a breed that originated in the French Alps. Saanen goats are stronger and less vulnerable to disease than Alpine goats, according to Walid Bou Habib, a partner at Goût Blanc, but both breeds have a significantly higher yield than the local goat variety. “The local breed is strong and can resist diseases, but their yield is low, at 0.5 kiloliters per day per goat, whereas with the Saanen you get an average of 3 kiloliters per day. This is related to the goats’ inherent genetic potential, and there is nothing you can do to increase a goat’s maximum yield. Because of this small yield, no Lebanese dairy [farm] would invest in a local breed to get goat milk,” explains Bou Habib.

Khoury speaks of the advantages of Saanen goats over the local variety, saying that their yield is more consistent, therefore allowing for a year-round production of dairy products. Khoury also explains that Saanen goats are bred to be farm goats and can milked using automated milking systems, whereas local goats are typically milked by hand in the fields. He says automated milking is more hygienic, and it produces milk that can be immediately processed and refrigerated.

Bou Habib says goat cheese is fast becoming a global trend: “Internationally, people are shifting from cow dairy products to goat dairy because of the idea that goat milk is healthier and does not contain lactose, which makes it easier to digest.”

Khoury explains that because the food industry in Lebanon has evolved a lot over the past decade and a half in terms of food safety, quality of products, and consumers’ taste and awareness of global food trends, Dairy Khoury has had to keep up with these developments to grow further.

As such, Dairy Khoury introduced a dedicated line of goat cheese products, Chevrette De Khoury, in 2016. “We chose to start this dedicated line because goat dairy is now the global trend, since it is perceived as healthier than cow milk, as it has fewer allergens and is lower in cholesterol,” says Khoury, explaining that their line includes goat yogurt, soft labneh, hard labneh, as well as baladi, halloumi, and double cream cheeses.

Dairy Khoury set up their 75,000 square meter goat farm in Meshmesh, in the mountains north of Jbeil, which is an hour and a half’s drive away from their production center in Ain el-Sendyene, Metn. Khoury explains that the company chose this location because of its extreme remoteness (thereby ensuring a pollutant free and cleaner environment) and abundance of agricultural land, as goats are extremely sensitive to their surroundings.

The pioneer of a branded and dedicated goat dairy production in Lebanon was Goût Blanc, who began its venture in 2013. While previously Daher had sold his imported goats’ milk to local dairies, he had not considered starting his own dairy production company until he met Bou Habib through Alfa Laval—a Swedish company that markets itself as the global leader in heat transfer, separation, and fluid handling—where Bou Habib used to work and from whom Daher had bought his automatic milking line.

The duo introduced new partners to the company—Camille Atallah, a lawyer, and holding company Sarkis Group—and imported more goats from France, bringing the total of imported goats to 300, which then went on to breed others. To house them, they  built a second farm adjacent to the first one Daher had already built in Anaya, north of Jbeil, an area Daher also chose because of its remoteness and pristine environment. They built the production facility and the nursery for newborn goats in the same area as well. All this investment was aimed at having a large-scale goat production business, and Bou Habib says that a total of $1 million has been invested in Goût Blanc to date. A further $1.5 million will be invested to expand the farm, as well as for distribution and transportation—Bou Habib says this amount will come from personal funds and a subsidized loan from the central bank. Until now, Goût Blanc is only breaking even with its goat dairy products.

Lebanese have indeed warmed up to goat dairy products, as even a casual observer cannot help but notice the abundance of restaurant menu items listing goat cheese as an ingredient or the supermarket shelves that are increasingly stacked with goat dairy products.

In fact, demand for locally produced goat cheeses and yogurts has generally been increasing faster than the available supply. Goût Blanc has a total of 1,400 goats and is in the process of constructing a third farm with a capacity of 1,800 goats which will be ready in mid-2018 and will bring their total number of goats to 3,200). Currently, the company processes a maximum of two tons of milk per day, but Bou Habib says this is not enough to meet demand. “The market demand is ahead of us—we should have started construction of the third farm two years ago to meet the growing demand that we are facing now. People think our distribution is bad because they don’t find us consistently in our points of sale. But what is happening is that our products disappear fast from the shelf because we have a limited supply,” he explains, adding that by early 2019 they expect to have enough supply to meet local demand.

Khoury also believes that the market demand for goat dairy is higher than the supply, and that there is therefore room for more players to enter the market without leading to saturation. Dairy Khoury has more than 3,500 goats that produce 3 tons of milk per day and has created a division in its factory solely for processing its milk—as such, Khoury says the company is able to keep up with the demand for its goat dairy products.

Although goat dairy products are hot items in Lebanon, not all of them are created equal, and it seems traditional tastes are hard to change.

Goût Blanc’s original idea, says Bou Habib, was to produce only French goat cheese. However, he and Daher quickly realized that the Lebanese market for that type of cheese alone was too small and would not justify the big investment they had in mind for their project. “A small segment of the market in Lebanon consumes French goat cheese, and they do so mainly in winter time around holiday gatherings, while they eat halloumi, labneh, and laban on a daily basis. So we decided to introduce these products as well to sustain and grow our business,” explains Bou Habib.

Goût Blanc has 10 products which include soft and hard labneh, labneh with oil, yogurt, two types of French goat cheese, halloumi, and double cream cheese.  Of these products, labneh alone constitutes 46 percent of the company’s turnover, while 15 percent is from yogurt, and only 10 percent is from the French goat cheese. “As a general taste in Lebanon, we prefer the sourness of the labneh and laban to the creaminess of French cheeses,” muses Bou Habib. Similarly, Khoury says Dairy Khoury’s most sold goat dairy products are labneh and yogurt “which are part of our traditional cuisine.”

Given the global goat cheese trend, both Goût Blanc and Dairy Khoury see a rosy future for their dairy products. Although Dairy Khoury says cow milk products will always be their best sellers—it currently constitutes 90 percent of their business—they plan to expand their goat line further by introducing French goat cheese in 2018, along with other goat milk products, to satisfy both local and export demand. (Its goat cheese products are currently exported to Qatar, Dubai, and Kuwait.)

Bou Habib says Goût Blanc also has expansion in mind, although its aim is to first meet local demand before it considers exporting. “Our goal is to have a total herd of 5,000 goats and use that to build a very strong brand in Lebanon before [exporting]. Once we feel the market in Lebanon is saturated, we would consider investing abroad, or increasing our production to export it. But there is a lot of potential in Lebanon itself. Hopefully, if we follow the global trend, the goat milk market should be around 10 to 15 percent of the total dairy market in Lebanon—to get to that figure, we would have to have 10,000 goats, not just 5,000,” he explains.

The main limit to the growth of the goat dairy products in Lebanon is that the feed is imported, which drives up production costs, and therefore price. Khoury says that the feed produced locally—mainly corn yeast and straw—can only satisfy 30 percent of a goat’s nutritional needs. And even then, it is cheaper to import all their feed.

Because of this, Lebanon cannot hope to be competitive with global leaders in goat cheese production unless the country specializes in niche products, explains Bou Habib. “The big problem in Lebanon is that we don’t have enough fields or agricultural spaces. It’s not normal to import feed and essentially transform it into milk, in Europe for example you have the milk where you have the feed. We therefore cannot be competitive in the international market unless we are competitive in special products where we can give added value,” he says, citing goat labneh as one of these products.

Even so, dairy producers say that certain governmental actions, such as protection of local dairy products from foreign competition and supporting dairy producer’s energy and export costs, would go a long way in strengthening their businesses both locally and abroad. If goat dairy products do someday constitute even 15 percent of the total dairy market in Lebanon, it would open up fresh opportunities for those looking into investing in Lebanon’s dairy market and for existing producers to diversify their pastures.