Ayman Baalbaki’s studio is located in one of Beirut’s busiest neighborhoods, above one of its busiest cafes, on one of the most congested streets. Inside the hangar like space, however, the outside world recedes. To the left of the entrance, a series of wooden pallets form a raised seating area, complete with embroidered throw pillows and two curved sofas covered in shaggy sheepskin. Behind it, there’s a stand-alone breakfast bar in polished metal. Framed paintings and sketches of all shapes and sizes adorn the walls. But none of these details sink in until later. For the first couple of minutes after I enter the space, my eyes are fixed on the canvases that lie half finished on the floor, propped against the walls to dry. 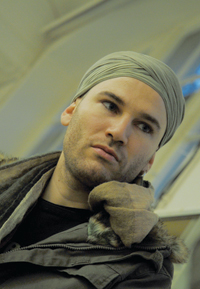 Baalbaki moved into his new Hamra studio almost a year ago. Designed by up and coming young architect Paul Kaloustian, the cavernous white space is punctuated by rough concrete pillars. At the far end is a work in progress capturing the burnt out carcass of an airplane with the Lebanese flag on its tail. The enormous painting is a frenzied mass of overlapping lines and daubs of paint. So is the floor. For five or six meters in front of the canvas, blobs and smears of paint almost obscure it, fading out slowly in a semicircle. “Most of the time, I don’t do preparatory studies,” says Baalbaki, surveying the scene. “I start to paint spontaneously and the painting takes over. It’s very violent. I don’t think that’s necessarily an advantage, it might be better if I did research and prepared. But that’s how I work.”

When people discuss Baalbaki’s work, the emphasis is often on his subject matter, linked to war and displacement, loss and destruction, identity, amnesia and collective memory. Face to face with one of his paintings, it’s his impeccable technique and the undeniable beauty of his work that is most apparent. 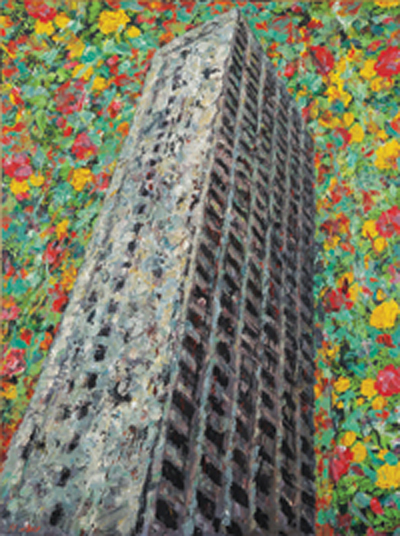 Born in 1975, the year the Lebanese Civil War began, Baalbaki’s early years were shaped by conflict. His family is originally from southern Lebanon, but fled to Beirut where they were displaced numerous times by the violence. His installations often attest to his memories of this displacement. Many of them consist of bundles of luggage and belongings tied together with rope, conjuring up the hasty packing of a family forced to flee with the bare essentials.

Baalbaki’s father and uncle were artists, as are his brother and cousin. He didn’t follow in his family’s footsteps unquestioningly, however. “It was definitely a choice,” he says. “When my brother Said and I decided to study art at university, they weren’t sure it was a wise choice. They told us it was a very hard way of life.”

In spite of this, Baalbaki enrolled at the Lebanese Academy of Fine Arts (ALBA), graduating in 1998 and moving to Paris, where he continued his studies for five more years.

“In 1995, when I was at ALBA, we were refugees in downtown,” he recalls. “I made a little painting of a destroyed building that faced ours, with laundry hanging on the line outside … at university, it was like there was this schism — they tried to avoid the subject of war. I was determined to break away from this general attitude in the country that this was something we didn’t talk about.

“In France, the theoretical or conceptual aspect of the work was much more important than it had been in Lebanon. Most of the subjects I work on now are themes I started tackling when I was there in 2000 and 2001. People always ask ‘why the war?’ I belong to a generation that has a duty towards remembrance.” 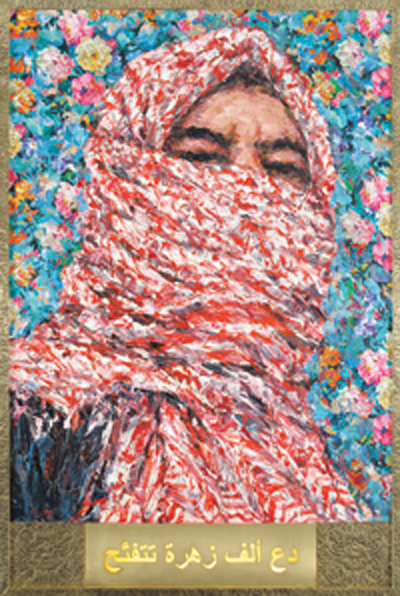 Baalbaki is best known for his Al-Mulatham or freedom fighter series, paintings capturing men with their heads and faces wrapped in the feda’iyeen’s kuffiyeh, their eyes shadowed and defiant. These works, in particular, have skyrocketed in value over the past decade, as collectors have bought and sold them at auction. In April 2013, a piece sold at Sotheby’s for $377,000 — more than 12 times the estimate of $20,000 to $30,000 for the 2009 work. The artist’s gallerist, Saleh Barakat, says that he prefers not to sell at auction, but will occasionally sell a piece from another series, to ensure that Baalbaki doesn’t come to be seen as a one trick pony. “We want his representation to be driven by quality,” he says, “not price.”

Baalbaki’s paintings of war damaged buildings, often curiously contrasted with floral backdrops that recall the colorful dresses worn by women in southern Lebanon, or a Monet painting, range from the iconic shell of the Holiday Inn to a series documenting the damage inflicted on Beirut’s southern suburbs during the 2006 war. But Baalbaki also tackles lesser discussed aspects of Lebanon’s turbulent history, such as the repeated bombing of the Beirut airport by Israeli forces, the subject of the painting currently propped against his studio wall.

Though his technique is classical, Baalbaki’s subject matter and satirical approach are distinctly contemporary. He’s not interested in painting water lilies, no matter how beautiful they might be. He often uses neon lights to spell out words that add a textual dimension to his paintings or installations. The title of a 2009 solo exhibition in London was encapsulated in a neon work marrying Dan Flavin and René Magritte: “Ceci n’est pas la Suisse” — Switzerland, it ain’t.

In Lebanon, Baalbaki’s work is confrontational, thanks to the country’s postwar policy of amnesty and amnesia. Regionally, he has found that some countries prefer not to exhibit pieces from his Al-Mulatham series, seeing their own rebels, dissidents and troublemakers in his freedom fighters. Overseas however, Baalbaki’s images feed into a perception of Lebanon as a country perpetually at war.

“I believe that any action has a political dimension,” he says. “Not in the sense of party politics, but politics with a big P. Sometimes I want to provoke in my work, but I’m never direct about it. Sometimes, when I paint something like the destruction of the MEA fleet during the Israeli invasions, it takes people back to realities that they had forgotten … there are people who tell me, ‘I shot at that building during the war.’ Others say, ‘it’s a self portrait of me.’”

It’s not only those with personal memories of the war that identify with Baalbaki’s work, however. Barakat is laughing as he tells the story of one client, an extremely wealthy, right wing French investment banker, who bought one of Baalbaki’s freedom fighters to hang on the wall of his enormous suite of offices in Place Vendôme. 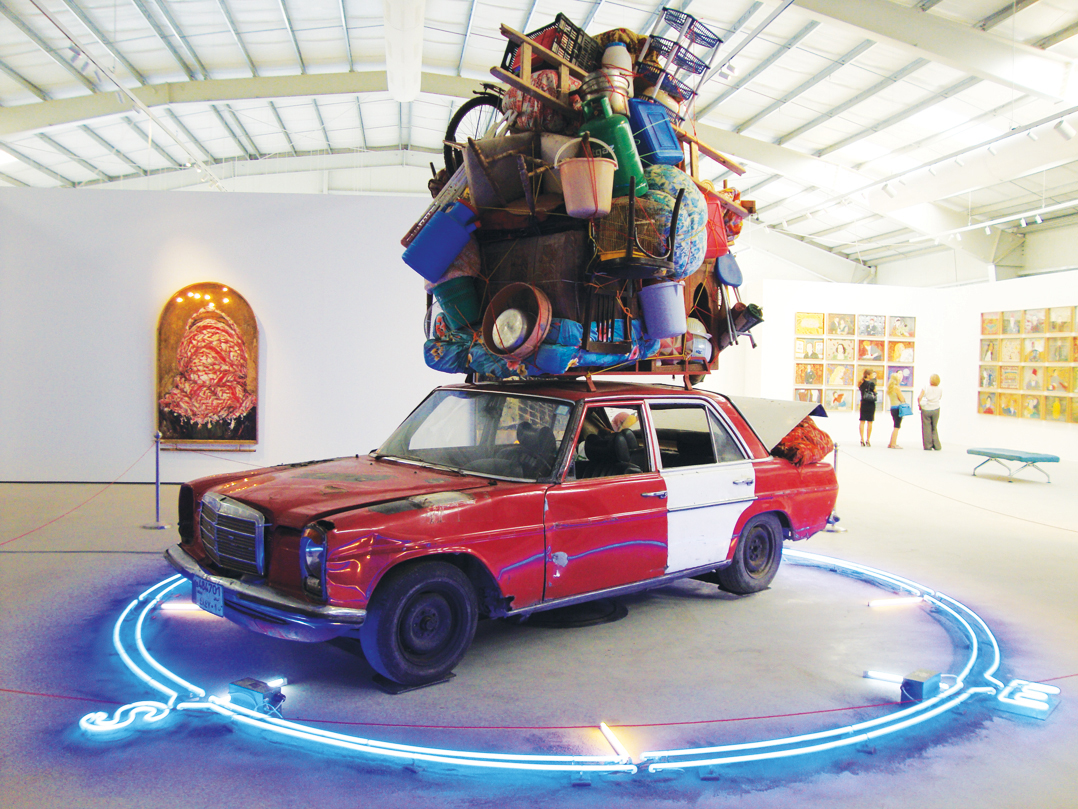