Roger Moukarzel was 12 years old when he took his first photograph, on a camera borrowed from his older brother. By 15, he was photographing the violence and devastation wrought by Lebanon’s Civil War, selling his photographs to international agencies like Sygma and Reuters, who published them around the world. At 27, one of his photographs was featured on the cover of Paris Match’s 40th anniversary issue. A hellish vision of a Beirut street engulfed in flames, partially obscured by thick clouds of choking black smoke, the 1989 photograph summarized 14 years of conflict in a single horrific instant.

These days, Moukarzel’s subject matter is almost diametrically opposed to everything that photography represents. Sickened by 15 years of photographing death and destruction — and the realization that war photography had become a sort of international trend — he left Lebanon for Paris in 1990 and started working in fashion. A stint in the genre of documentary followed, back in his native Lebanon, and this evolved into his work as an artist. No longer interested in capturing tragedy, his projects instead promote a kind of peaceful coexistence. 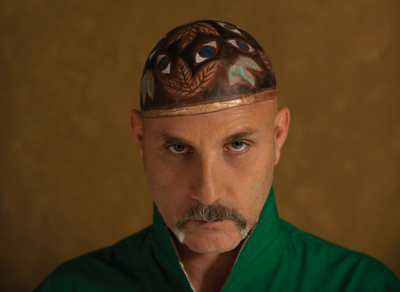 Now in his early 50s, Moukarzel has all the character you might expect from someone with such a diverse portfolio. His bald head is offset by a thick gray handlebar moustache, and a tangled mass of colorful friendship bracelets adorns his right wrist. As we talk, he skips frequently from one topic to another, making mental associations too quickly for me to follow.

Backlit glamour shots of models with towering heels and endless legs line the walls outside Minime, the studio Moukarzel founded in 2006 in the former headquarters of a Karantina steel trader. Shot from inventive angles, they possess a creativity not usually associated with commercial fashion photography. Inside, it’s a different story. Glancing around Moukarzel’s office, I see very few photographs, but rows and rows of vintage cameras, including the ones Moukarzel himself used during the war.

“My family owns the oldest magazine in the Arab world, which is Al Dabour, so I grew up with journalists,” he recalls. “At 12, I was passionate about photography. I was always looking at photos … being in Lebanon, I became a war photographer because it was just all around me.”

No ambulance chaser, Moukarzel often captured moments of calm amid the chaos. His war shots betray traces of the documentary-infused art projects that were to come later. One black and white photo from 1978, when Moukarzel was 16, captures three Lebanese soldiers seated beside a makeshift checkpoint, blockades made of heaped sandbags behind them. The youngest, a plump man in his 20s with a cross displayed prominently around his neck, holds a bunch of leafy green stems in one hand. He’s caught in the process of either handing the bouquet to, or accepting it from, an elderly lady, wrapped in a large cardigan.

Taken at the perfect moment, the image contrasts human kindness and brutality to create a profound sense of pathos, but it also suggests a propensity to spot the bright side, something Moukarzel has proven himself able to do. His commercial fashion shoots aside, the photographer’s documentary work, published in several books over the past two decades, demonstrates a focus on the art of reconciliation.

For one project in the early 1990s, ‘Trait/Portrait,’ Moukarzel spent weeks photographing people from the Druze and Maronite communities in Lebanon’s mountains, documenting their daily lives. He published the photos in a single book, to show that in spite of their differing religious beliefs, the two sects had a lot in common.

“We have a role as photographers since we are seen by a lot of people,” he says. “We have [a responsibility] towards education and spreading positive things, and I do it every day. Through my exhibitions and my photographs, I send a message. When I united the Maronites and the Druze, that was a strong message because they were not united yet. Walid Jumblatt took my book and went to the president and said, ‘If this guy can unite them, why can’t we be united?’ I also did ‘The Veil,’ where I took six veiled women from six different religions and I put them in one exhibition, to promote unity.”

These days, the photographer still does some commercial work, but his main focus is on art photography. Two years ago, he began work on a series called ‘Sublimed Elsewhere’s,’ traveling to remote Lapland in the far north of Sweden to photograph the native Sami tribes in a project intended to highlight the perils of pollution.

“The idea around this was globalization,” he explains. “The idea that we live in one small world, where everything affects everyone, and if everybody makes a small effort to protect the environment, it will be a big thing in the end. How do you explain in a picture that if you build a factory and you pollute a lot in the United States it will affect Lapland? I took a factory and I put it physically behind the Sami people, who live in and from nature.”

Halfway between documentary and art, Moukarzel’s project involves traveling to six continents, where he photographs people in urban environments against a natural backdrop, and vice versa. So far Moukarzel has shot photos for the project in Lapland, New York, Sierra Leone and Gambia, and he plans to travel to Kazakhstan this summer to shoot rural villagers. 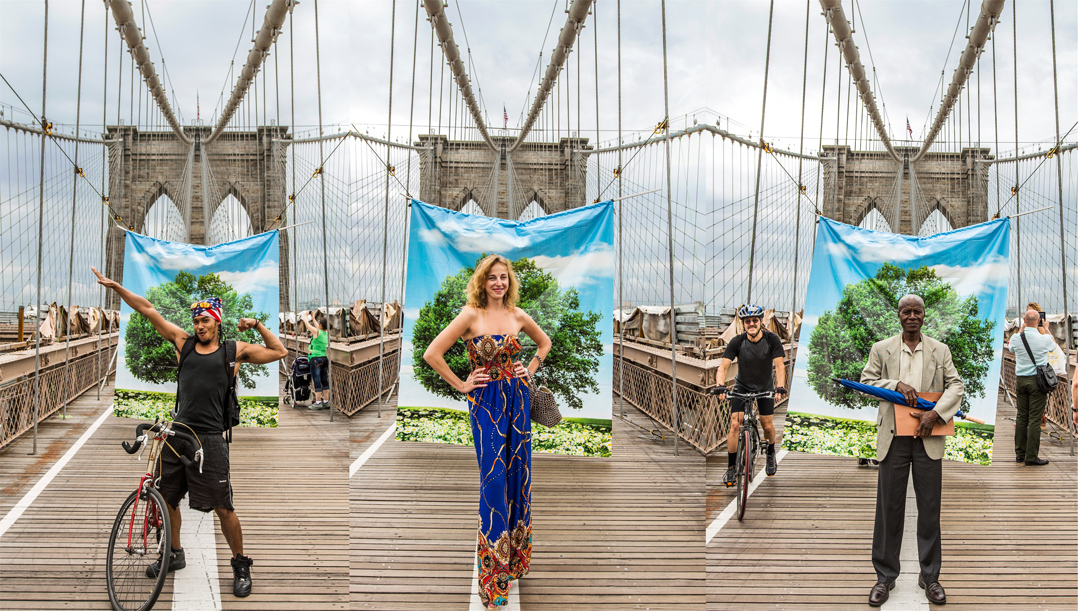 “My subjects are becoming more and more global,” he notes. “I feel very inspired in Lebanon, but also by wider global topics, and this is a normal evolution I think. When I was a war photographer I wasn’t only working in Lebanon and when I was a fashion photographer, I also worked everywhere in the world.”

A second project, a film made up of over 50,000 individual photographs, highlights some of the more positive aspects of globalization. Entitled ‘So Far So Close,’ the video segues neatly between beautiful, tourist brochure-style shots of the Omani desert, Chinese temples and children playing in a Moroccan village, intending to show the links between the billions of people living in the MENASA region. The film premiered on the largest screen in the world in November, when it launched at the Singapore Art Fair.

His interest in forging connections is echoed in his attitude towards the proliferation of imagery in the Instagram age. “I think all of this social media is a very positive thing,” he says, “because you can express yourself to a wider audience. Anybody can take any picture and express himself. Before we didn’t have this fantastic worldwide network. I think social media has given a more important place to photography, so it gives us a more important place.”

For Roger Moukarzel, the man with a mission, and a camera, that place is to seek out beauty, and then ensure it has something to say.

Living in a street artist’s paradise

The writing’s on the wall

An illustrated tour of Beirut