The first time I visited the Meat the Fish shop in Saifi Village, I was accompanying a friend the day before Valentine’s day. It could be said that this friend was experiencing a type of oyster love affair, posting pictures of himself eating oysters all over social media, several times per week. We ate oysters fresh from the Irish Sea, sipped cava and looked out onto the gray car park, thinking that, given the surroundings, we could well be in Belfast.

Some months later, as the Mediterranean summer began to open its warm embrace, I returned to the small Meat the Fish outlet to find a transformed scene. The pavement was awash with diners, sitting on wooden palettes with hungry eyes fixated on the plates of sashimi and gravlax sandwiches being brought out by waiters. The slender doorway was overflowing with customers picking up premium groceries and Gucci framed customers waiting to be seated, as I, on the other hand, looked for the owner, Karim Arakji. 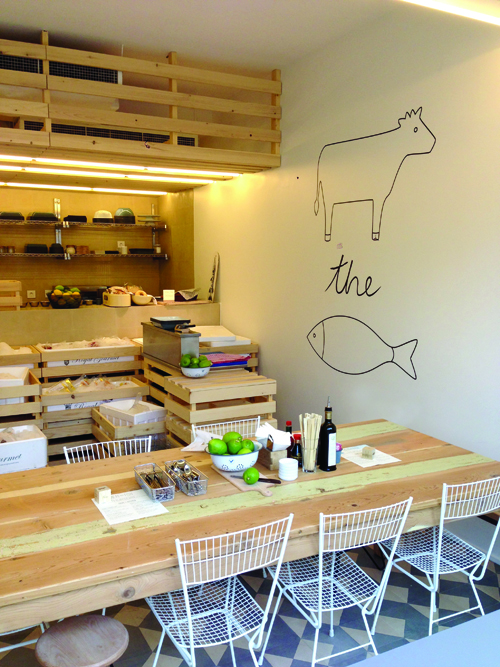 Back in 1996, Arakji and his father established Royal Gourmet, a business importing salmon sourced from fish farms around the UK to Lebanon. As Arakji explains, “We started selling to businesses, hotels, restaurants, supermarkets, caterers, etc., with premium fish,” thus feeding the Lebanese national addiction to the fatty pink fish. Once the salmon proved a success, they began to import other fish — Dover sole, turbot and tuna — in an attempt to get the Lebanese to experiment with other kinds of fish. Around 2008, Royal Gourmet started sourcing prime cuts of meat, not for business reasons but because Arakji was a meat enthusiast. He tells me it’s because of his O+ blood type.

By expanding their supply chains, they could begin sourcing all the way from Scotland to Australia but though their produce was selling, there seemed to be a limit to their growth. While the chefs at the restaurants and hotels were delighted with the rich and rarefied variety of meat and fish that was flown in four times per week, supermarkets, reluctant to take risks, only bought the conventional favorites. Arakji noticed that there was “a very small variety of meat, shellfish and fish [available to consumers]. Any five star supermarket would just have the local basics, and salmon.”

This gave him an idea: what if people at home could have the same services as a chef would? His experience had taught him that people usually cook and eat only what is familiar, “so this new approach would be the only way to push people to try things which weren’t necessarily local.” The concept was that people could order as much or as little meat and fish as they wanted, and the fresh produce would be flown in and delivered to their door. “You name it, we’ll get it” was the tagline.

With plans laid out to launch the new culinary concierge service they decided to call Meat the Fish, Arakji called on British chef and fish enthusiast Mitch Tonks, to whom he had been introduced by his British supplier. Tonks, a partner in the company, was scheduled to write and cook the menu for the launch party. In October 2012, one week before the opening date, internal security forces intelligence chief Wissam al-Hassan was assassinated by a car bomb in Ashrafieh. Tonks immediately pulled the plug. Unperturbed, the show went on with a dinner cooked by local chef Reem Azoury. 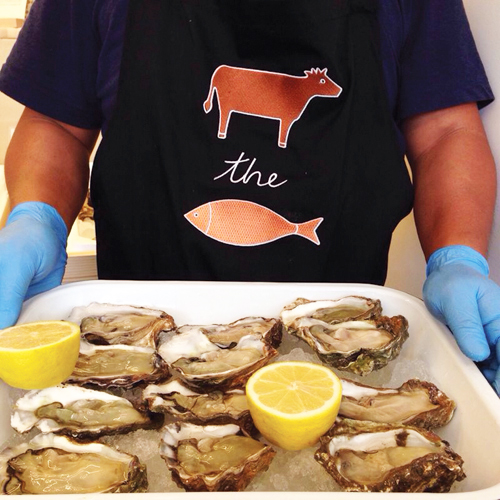 Meat the Fish’s inaugural product was a template for culinary gatherings. People could host an event, invite their friends and potential clients, or were invited to these dinners, held in collaboration with local farm-to-table restaurant Tawlet. Meat the Fish would provide the recipes, they even offered a hotline for people to call Azoury and ask her advice on how to cook unfamiliar dishes such as Wagyu beef or yellowfin tuna.

Encouraged by the success, in 2013, the team decided to do a five day Christmas market where potential customers could come and see the vacuum packed goods, prettily displayed on ice, inside their wooden cargo crates. An address in Saifi Village offered their space rent free and so they took it. This pop up Christmas market was such a resounding success that the company took it on a permanent basis, after coming to a rental deal with the property owners. Now, the shop serves sushi, salads, soups and sandwiches.

Despite the designer-clad, Range Rover driving, caviar spooning regulars, Arakji insists, “This is still a shop, not a restaurant. It doesn’t have any of the services of a restaurant in any way, shape or form.” And they don’t have plans to expand into the restaurant game either, preferring to focus on their bread and butter: quality meat and fish. They do, however, provide a dinner service hosted at the shop, which people can reserve by calling up and choosing from three different menus with various price ranges to get the only table in the shop. 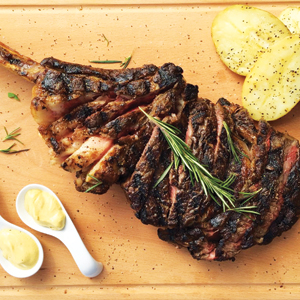 Given the recent food scandal in which Lebanese Health Minister Wael Abu Faour publicly exposed a mass violation of health standards, shut down abattoirs and even terminated government contracts with hospitals, customers at Meat the Fish can take comfort in the fact that what they are putting into their mouths is not what Abu Faour described as “dipped in diseases and microbes.” Arakji takes little pleasure in this fact, “There’s the good, the bad and the ugly here in Lebanon, just like everywhere else in the world, but in this case, sensationalism in the media hurt people unjustifiably.” Yet at the end of the day, he says, a stricter observance of food hygiene is better for everyone.

The service that Meat the Fish provides is fairly remarkable. Eleven to 15 tons of produce, sourced all over the world, is shipped over to Lebanon four times per week and delivered to your door in as little or large amounts as you desire. The delivery menu boasts an outstanding array of fish and shellfish, langoustines from Norway and swordfish from the Indian Ocean; meats include lamb rack from Holland and merguez sausage from France. This is the result of almost 20 years in the supplying business and judging from the wait times at lunch, it seems to have won over many people, not just my oyster loving friend.