Any analysis of Lebanese banking performance in terms of activity has to be read in conjunction with the operating environment in the region and the recent expansion of Lebanese banks in regional markets. Real GDP growth, as estimated by the IMF, stood at 2.4 percent for the MENA region in 2014, while Lebanon registered 2.0 percent with an outlook of 2.5 percent for 2015.

At the banking level, preliminary domestic figures for the MENA region have reported an acceptable 8 percent annual growth in major aggregates in 2014. Lebanon compares well, particularly with regard to the performance of oil producing countries — albeit with growth below the Arab MENA average. Lebanon’s banking sector ranks sixth by assets, fifth by deposits — an achievement considering its low public sector deposits compared to other countries — and seventh by loans among 15 surveyed countries of the Arab MENA region.

In Lebanon, amidst continuing regional tensions and lingering domestic uncertainties, the banking sector has registered positive growth, more or less in line with previous years. For the purpose of this study, we will analyze the performance of the ‘alpha group’ of 14 banks with deposits exceeding $2 billion, which represent about 87 percent of the sector. 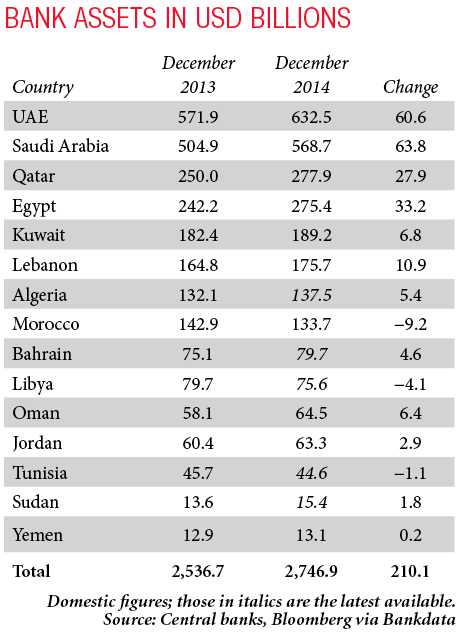 Growth in assets and deposits

Total assets of alpha banks grew by 10.4 percent in 2014, moving from $176.3 billion at the end of December 2013 to $194.6 billion at the end of December 2014. Activity growth was driven by both domestic and foreign activity, though the latter proved to be more vigorous over the past year. Domestically, assets of alpha banks witnessed an 8.8 percent growth in 2014, while their foreign activity grew by 16.9 percent over the year.

Customer deposits remain the main driver of activity growth. They accounted for 82.7 percent of total activity and grew by 9.4 percent in 2014. In particular, foreign deposits grew considerably, increasing by 22.4 percent between December 2013 and December 2014, while domestic deposits grew by 6.8 percent over the same period. Out of the latter, Lebanese lira (LBP) deposits grew by 7.6 percent and foreign exchange (FX) deposits grew by 6.4 percent, slightly shrinking deposit dollarization of domestic activity. Similarly, LBP loans grew by 14.1 percent while FX loans rose by 5.5 percent, contracting domestic loan dollarization to its lowest level in decades. Foreign entities engaged in significant lending, which reported a growth of 21.9 percent in 2014, in line with foreign activity growth at large. The past years actually saw active lending activity on behalf of alpha banks with the loan portfolio reporting an $18 billion increase since 2011, half of it domestic, of which around 62 percent was in foreign currencies. 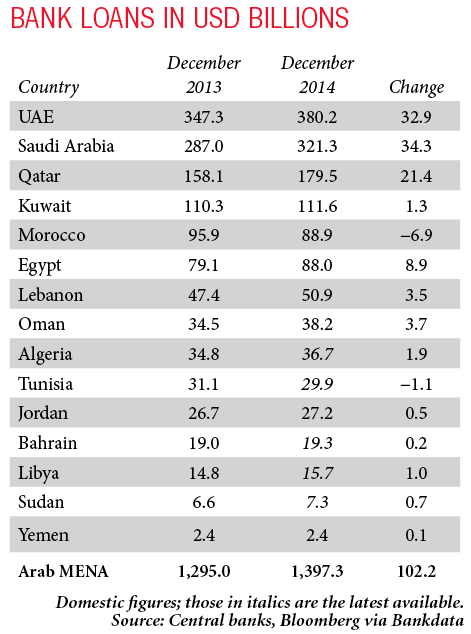 The growth in lending activity over the past years, partly supported by significant stimulus packages from Banque du Liban, Lebanon’s central bank, has not been to the detriment of asset quality despite adverse operating conditions both domestically and in many regional markets. Within the context of a lower growth in gross doubtful loans (7.6 percent) than that of total gross loans (11.4 percent), the ratio of gross doubtful loans as a percentage of total gross loans shrank from 5.94 percent in December 2013 to 5.73 percent in December 2014. When adding substandard loans, the ratio drops from 6.75 percent to 6.43 percent over the same period. Furthermore, with loan loss reserves equivalent to 76 percent of doubtful loans, the ratio of net doubtful loans to gross loans stabilized at 1.38 percent over the past year, while its ratio relative to equity registered 5.13 percent at the end of December 2014. It is worth noting here that alpha banks have substantially increased their collective provisions over the past three years, raising them by almost $200 million to reach $637 million in December 2014. 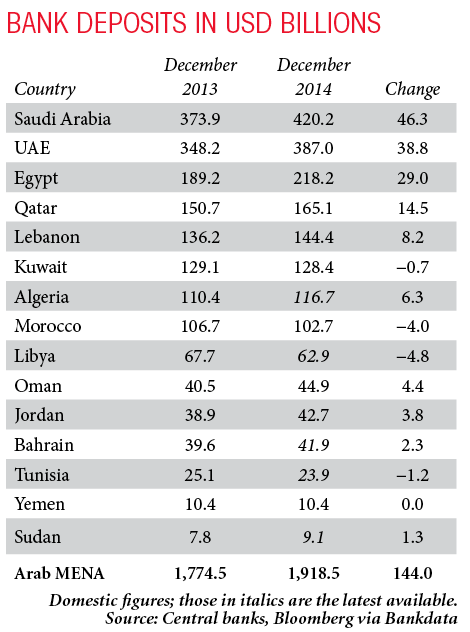 With respect to the growth in net fee and commission income that evidences improved immunity against tightening margins and spreads in a low interest rate environment, off balance sheet activity has witnessed a contraction of 2.1 percent in total openings of letters of credit in 2014, while fiduciary accounts and assets under management have increased by 14.2 percent, reaching $24.2 billion at year end 2014. Furthermore, we note that the ratio of non-interest income to total income has again regressed to 33.1 percent in 2014, while the ratio of net fee and commission income to non-interest income has further increased to 49.1 percent.

As for the increase in operating expenses, alpha banks have been active on the network expansion front, opening 67 new branches in 2014, half of them domestically. Furthermore, they recruited an additional 1,654 employees, 60 percent of which are in Lebanon. Nevertheless, the measure of cost efficiency represented by the ratio of operating expenses to total assets was stabilized by alpha banks at 1.44 percent over the past 3 years, while cost to income was maintained at circa 50 percent in 2014.

The various components of return ratios show that despite continuous pressures on interest margins and spreads — and after the downward slide witnessed in 2013 — alpha banks stabilized their interest margin at 2.0 percent and their spread at 1.92 percent in 2014. The stagnation in asset utilization (2.87 percent) and net operating margin (35.19 percent) drove a slight contraction in return ratios with return on average assets hovering at 1.01 percent and return on average equity tightening to 11.55 percent (12.90 percent for the return on average common equity).

The return ratios of alpha banks detailed above are almost equal to the latest ratios reported for the sector and a comparative global analysis shows that both return on average assets and return on average equity of Lebanese banks are underperforming relative to global benchmarks.

The case for increased cycling in Lebanon