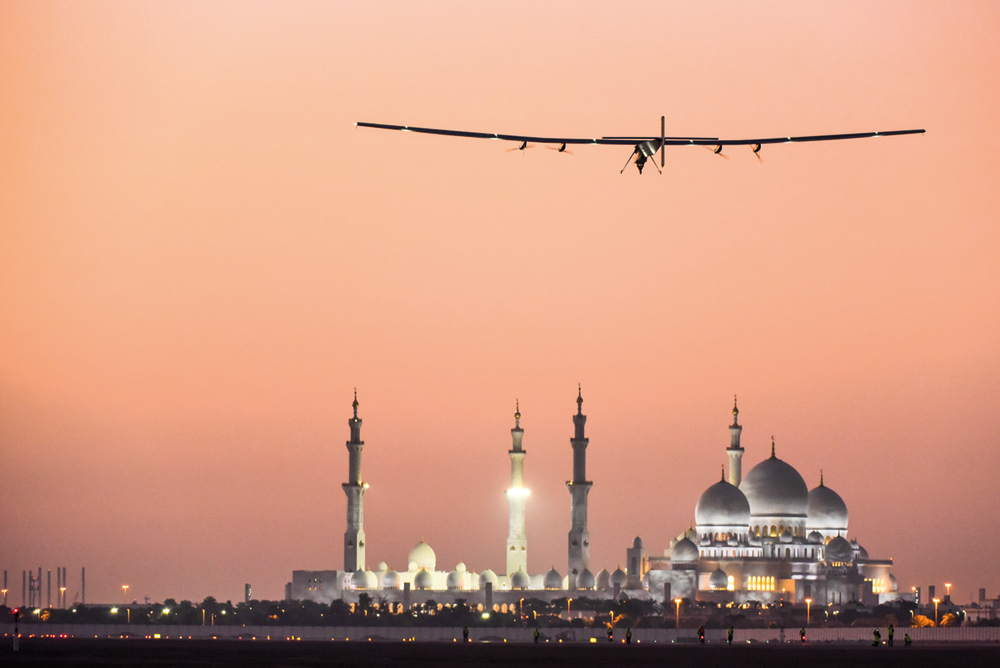 The sight was electrifying: a solar powered flying machine ascended into the desert morning in order to probe a new frontier for ecology and sustainability. Venturing far beyond the conventional concept of an airplane, Solar Impulse II is a science adventure to test and develop new practical technologies that can deal with the urgent, global problem of climate change.

Hatched by two Swiss celebrity explorers, Andre Borschberg and Bertrand Piccard, the experimental aircraft intends to circumnavigate the earth in a five month-long flight that is divided into 12 segments. To optimize its chances of success, Solar Impulse II took off last month from Abu Dhabi.

The ultimate problem the flight seeks to address — climate change — is defined as the modification of climate patterns, both regionally and globally, and has been attributed to the increased level of carbon dioxide in the atmosphere due to fossil fuel consumption. The general consensus is that a continuous buildup of emissions will have dire effects on the planet, such as seas submerging cities and extreme weather patterns.

The environment has always been a highly important topic in the world’s agenda but the current environmental protection campaigns seen around the globe are unprecedented, as Hollywood actors, top politicians and ordinary people have made climate change their personal crusades. Leonardo DiCaprio, actor and UN representative on climate change, stated at the 2014 UN Climate Change Summit in New York that “climate change is not fiction … droughts are intensifying, our oceans are acidifying … we’re seeing extreme weather events in the west Antarctic and Greenland ice sheets melting at unheard of rates.”

These statements characterize the mood of the public at a time where saving the environment is the only way forward. While the global debate over climate change is today as heated as ever, Gulf Cooperation Council countries — highly scrutinized due to their roles as some of the top carbon emitters in the world due to their heavy energy consumption — are beginning to take action against climate change.

“The planet has a fever. If your baby has a fever, you go to the doctor. If the doctor says you need to intervene here, you don’t say, ‘Well, I read a science fiction novel that told me it’s not a problem.’ If the crib’s on fire, you don’t speculate that the baby is flame retardant. You take action.” — Al Gore

When we burn gas, oil or coal, the infamous fossil fuels, carbon dioxide (CO2) is released into the atmosphere, leading to an overall increase in the planet’s temperature. It is indisputable to say that at the heart of the matter of climate change is carbon emissions production. Hence, the decrease of carbon emission is regarded as a crucial factor in controlling the planet’s temperature.

The effort to control climate change is a not a recent phenomenon. In the last decades, the governments of many countries have agreed to enter into numerous treaties to achieve this target. In 1979, the pioneering world climate change conference took place, hand in hand with the oil crisis and realization among many nations of their oil dependency. In 1988, the Intergovernmental Panel on Climate Change (IPCC) was set up.

Until then there was no framework to monitor climate change, hence the IPCC and the second World Climate Conference called for a global treaty to be put in place. The United Nations General Assembly called for the swift implementation of a framework convention. As a result, The United Nations Framework Convention on Climate Change (UNFCCC) was implemented in 1992 and although countries adhered to it (by considering what to do to limit global temperature increases and the resulting climate change), it required fine tuning. By 1995, countries realized that emission reductions provisions in the Convention were inadequate. It was a turbulent time for climate change. The measures were not successful, and some argued insufficient, to fulfill the required goals.

In 1997, the Kyoto Protocol was adopted. It was seen as a very positive development, especially after the Convention. The effect of the protocol is that it legally binds developed countries to emission reduction targets. The protocol’s first commitment period started in 2008 and ended in 2012. The second commitment period began on January 1, 2013 and will end in 2020. There are now 195 Parties to the Convention and 192 Parties to the Kyoto Protocol. The protocol entered into force on February 16, 2005. To ensure targets are met, the parties to the protocol have continued the negotiations and have amended the protocol to achieve more tangible and increasingly ambitious targets by 2030.

Other highly significant developments have been the COP15 (Copenhagen Accord), the Cancún agreements, the Doha amendments and most recently the COP20 Lima Climate Change Conference in December 2014. The effect of these recent developments is to give the required ‘legality’ to all these agreements, to ensure pledges are officialized, binding and structured. A lot of progress has been made at international level that has great implications on economic and sustainable development, the management of resources and population demographics.

It is common knowledge that Gulf countries are amongst the higher producers of carbon emissions with the highest per capita carbon footprint in the world, which has been driven by the vast number of resources, ambitious projects and economic developments in these countries. Currently, the UAE annual per capita footprint amounts to roughly  7.8. hectares per person. Kuwait is now ranked as the world’s worst footprint and Qatar is the second, according to the 2014 WWF’s Living Planet Report.

However, there is a growing awareness of environmental and sustainability matters amongst Gulf Cooperation countries and in the Middle East, which is paving the way for a ‘greener future’ in this part of the world. The UAE especially has been at the region’s forefront of environmental friendly projects such as the zero pollution, zero waste city and Masdar’s carbon emissions reductions strategies under the various protocols and conventions.

To name recent legal measures with positive implications for reducing emissions, the UAE launched via its Supreme Council of Energy a mandatory energy efficiency standardization and labeling scheme designed to improve energy conservation and maximize energy utilization in residential properties. The energy consumed by ventilation devices and air conditioners is truly significant and the labeling system introduced in 2012 has enabled a more efficient control of power consuming devices, in line with international standards focused on decreasing electrical power consumption.

The UAE’s progress in this field has been gradual but consistent, as it has also introduced ‘green city’s concepts’ while government buildings have to adhere to energy savings programs including new buildings (2011 Supreme council of energy initiative with the Dubai Municipality and DEWA). This initiative becomes even more powerful in light of construction projects being developed for the 2020 Dubai EXPO.

On the international stage, the UAE sent a high level delegation to the 20th COP 20 meeting held in Lima, Peru, in December 2014. The conference is a central forum where countries can communicate their strategies to reduce climate change, paving a way to the new global agreement in Paris in 2015. The UAE’s participation was very well regarded and it emphasized its strong commitment to climate change control, via major commercial renewable investments through Masdar (up to $2 billion of projects), carbon capture storage and funding of renewable energy projects in developing countries via IRENA and the Abu Dhabi Fund for Development.

In January 2015, UAE vice president, prime minister and ruler of Dubai, Sheikh Mohammed bin Rashid Al Maktoum, announced the launch of the Green Economy for Sustainable Development strategy. This plan focuses on environmental preservation as well as establishing the UAE as a world leader in green technology, renewable energy and reduction of carbon emissions (carbon capturing and storage technologies).

Projects, policies, legislation and international collaborations are seen as the pillars of this national initiative that will certainly transform the UAE’s economic infrastructure and provide parameters to the other GCC nations. The Abu Dhabi Sustainability week that took place from January 17–24, 2015, brought together politicians, leaders and investors, to shape the future of climate change and the world’s green economies.

According to Masdar, Abu Dhabi’s Executive Council could give Masdar permission to build Nour 1, a 100 megawatt photovoltaic plant. As the organization points out, the project has been put on hold since 2011, but it is a necessary step in Abu Dhabi’s goal to source 7 percent of its powers from renewable energy by 2020.

It is within the UAE’s drive towards change its position and reputation to a clean future that Abu Dhabi welcomed Solar Impulse II and its pilots and supported the team’s attempt to fly around the world using solar energy. Within the first 11 days from their takeoff in Abu Dhabi, Borschberg and Piccard — whose international team also includes UAE volunteers and a Lebanese nutritionist — already experienced weather related delays, bureaucratic obstacles and even the temporary breakdown of the Solar Impulse II website. But more importantly, their attempt is to demonstrate that clean energy can achieve things that have been previously thought impossible. They have completed their first four flight segments successfully and with a few new records.

This is a futuristic initiative that might change the history of aviation and clean energy and the UAE is at the forefront of it.  However, the UAE still remains one of the world’s worst carbon emitters and it is necessary for the country’s and the whole region’s population to adopt an energy saving and conservationist approach in order to reduce the per capita footprint. Education and high scale initiatives will assist in this plan and the UAE is on the right track.