Lebanese wine producers are hopeful about the industry’s future

People the world over have long been infatuated by wine, with writers and poets ranging from William Shakespeare to Abu Nawwas singing its praises.

Indeed, wine production has a very rich global history, with the oldest winery – discovered in modern day Armenia – dating back to 4100 BC. Lebanon’s own history with wine can be traced back to the Phoenicians who traded it across the Mediterranean to some parts of Europe. Some also believe that Jesus’ first miracle of transforming water into wine took place in Qana, Lebanon.

This rich history, however, is not without ups and downs. The Ottoman Empire banned wine production (save for religious reasons) and more recently, the Lebanese civil war largely put a stop to most industries in the country. Lebanese wine, however, has since survived these obstacles, emerging more diverse and interesting than before.

Following the end of the Civil War in the early 1990s, only five wineries (Château Ksara, Domaine des Tourelles, Château Musar, Château Kefraya and Château Nakad) were operating. However, the 1990s was an active period for the Lebanese wine sector. Seven new wineries were created during this time and the Union Vinicole du Liban (UVL), a private sector body made up of all existing wineries which aimed to coordinate and protect common interests, was established, according to Zafer Chaoui, current head of the UVL and chairman and CEO of Château Ksara.

The last ten years saw another boom in Lebanese wine production, with 23 additional wineries launching their first vintages and a few more wineries rumored to be in the works for 2016. In conjunction, general interest in wine consumption has also increased among Lebanese. “When I arrived to Lebanon in 2006, I noticed that people used to order mainly whiskey and spirits in restaurants. Today, I see more people ordering wine, so there is a wine culture growing in Lebanon,” says Fabrice Guiberteau, oenologist and technical director at Château Kefraya. Interest in wine culture among the Lebanese is also evident by the growing market for wine tourism in the country, with most wineries reporting an increase in visitors over the past few years.

Today, Lebanon’s 40 wineries, according to the UVL’s website, produce around 8.5 million bottles of wine annually, with Château Ksara and Château Kefraya accounting for almost half that number and with the other, relatively newer wineries, growing and increasing their production yearly. However, wine production is not only about volume but also  about quality, as Lebanon’s boutique wineries demonstrate. These wineries pride themselves on producing fewer bottles per year, believing that this allows them to offer better controls for quality and taste.

But wine production in Lebanon is very low compared with neighboring wine producing countries such as Greece or Cyprus. While Lebanese wine has thus far dominated the Eastern Mediterranean export market, other countries in the region are rapidly catching up. According to the wineries interviewed for this article, the reasons for the lack of real growth in wine production mainly include the lack of stability in the country which has discouraged major investments in wine production, the lack of serious government funds supporting the sector’s growth and comparatively low local wine consumption, despite the recent increase. “Consumption in Lebanon, which is the first and most important market for all of us, is definitely not growing as it should because of the lack of tourists and other reasons [which] we always state,” says Hady Kahale, general manager of Ixsir, adding that the winery still managed to achieve 50 percent market growth so far in the year 2015.

Today, the majority of Lebanon’s wine producers export a hefty percentage of their bottles, ranging from 20 to 60 percent according to the wineries interviewed. In fact, according to Kahale, the only two exports for which the balance of trade in Lebanon is positive are wine and jewelry. Michael Karam, author of Wines of Lebanon, explains that Lebanon has long been on the radar when it comes to wine because of the late owner of Château Musar, Serge Hochar, and his promotion campaign in the United Kingdom during the Civil War. More recently, according to Karam, Lebanese wine found success in the UK due to the Wines of Lebanon campaign, which was initiated and funded by the UVL in 2010 to collectively promote Lebanon’s wine in the country.

“It was a major turning point, not only in the way Lebanese producers marketed their wine but also in the way they came together as a group. It was a game changer and a momentous time in the history of Lebanese wine marketing initiatives,” says Karam, speaking of the campaign.

Indeed the UVL, which represents almost 95 percent of the wine producers in Lebanon, has done a lot to promote Lebanon’s wines beyond the UK. At international wine festivals the UVL represents Lebanese wine in pavilions and programs they fund themselves. “We understood a very simple fact which is that being part of a bigger cake is much more important than eating each other out of a smaller cake. If we were a saturated market with no growth and consumption is at a maximum, maybe then we would be in cut-throat competition [with one another]. But since wine consumption in Lebanon can still increase three fold, and we are able to export ten times more, with room for all, the only way to grow like this is by working all together,” says Kahale. Today the main export markets for Lebanese wines are France, where it is mainly sold to numerous Lebanese restaurants, the UK, Germany and the US, with some wineries citing clients in cities as far off as Tokyo and Sydney. 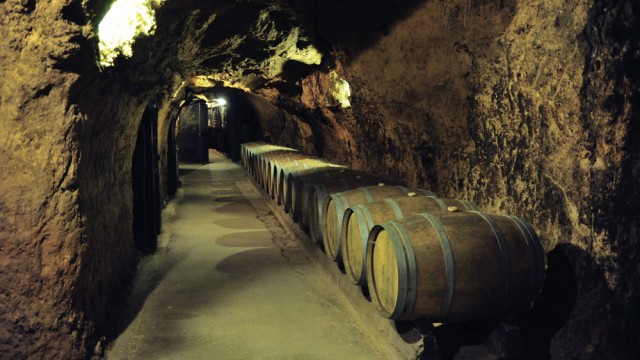 Any growth in the wine sector over the past decade can be attributed to the efforts of the UVL and winemakers themselves. While governments of wine producing countries typically support them with exports through generic campaigns, support from Lebanon’s government only recently kicked in. “I think as a result of the momentum which Lebanese wine gained through this initiative (the UK campaign), the government, which was previously reluctant to support the wine sector, realized that it couldn’t ignore Lebanese wine anymore, so in 2013 it sponsored a Lebanese wine day in Paris at the Four Season’s George V Hotel and another one last year in Berlin,” explains Karam. This year, explains Chaoui, the Ministry of Agriculture was planning to host the Day of Lebanese Wine in New York but as the annual budget has not been allocated yet, it appears to now be too late.

All winemakers interviewed commended the Ministry of Agriculture and the government for the positive role it was beginning to play in supporting this important industry in Lebanon. Some, however, felt that the budget allocated for wine production could be spent in a more efficient manner to maximize impact. “The government is playing a huge roll but the problem is that it doesn’t use its budget in an effective manner. It holds one event with a big budget when we can use the same budget in more diverse ways,” explains Faouzi Issa, winemaker and owner of Domains Des Tourelles. “Any state budget should be spent in coordination with the UVL, which has good experience in budget allocation for marketing initiatives; there needs to be strategic planning,” recommends Karam.

Others feel that the budget allocated for generic campaigns is a good start but more money is needed to be able to compete with other wine producing countries. “If historically you spend zero dollars on the sector and then you start investing up to $50,000, this is [beyond our] expectations, so coming from a zero budget we are extremely happy and grateful for what they did. But if we start comparing with other countries, where millions are being poured into this sector, it’s nothing. The day we receive financial support from the government – about $4 million dollars to cover international advertising and positioning – then we can really start competing with other neighboring countries,” explains Kahale. He added that while financial support from the government may be low, they have nonetheless been supportive and accommodating when possible, such as helping to create Routes De la Vins Du Nord.

Chaoui adds that the Chamber of Commerce has been supportive of the sector as well, allocating a yearly budget for wine production which is typically spent to supplement the government’s generic campaign. “This year, since we have no budget from the government for the generic campaign, we will go as the UVL to an exhibition in October in Brussels called Megavino where buyers come from the whole region,” he says.

Chaoui also urges the Ministry of Agriculture to prioritize funding for the National Wine Institute (NWI), which was formed last year but has yet to receive a budget to function properly. Once it does, explains Chaoui, the NWI, which has members from both the public and private sector, will assume the role of technically regulating wine production and ruling on appellations. “The NWI is what central banks are to local banks. We need it for technical and control reasons and for the reputation of the Lebanese wine,” concludes Chaoui.

Wine production in Lebanon remains on a steady course, not significantly increasing production but not decreasing either. Only time and the right budget will tell if production will eventually skyrocket.