Competition for beachgoers is fierce in Lebanon

Nothing feels better than spending a day or two, a month, or even an entire summer right on the coastal shore of the sparkling waters of the Mediterranean Sea. It is one of life’s priceless pleasures, but for Lebanon’s beach resorts and clubs, it is not just the weather that is heating up—competition and rivalry among them is also fierce.

The first private beach club in the Middle East, the Saint-Georges Yacht Motor Club, was founded in Beirut in 1936 by Michel Nader, sparking a domino effect. Beach clubs experienced a golden period pre-1975, followed by a dormancy period post-war, with a greater focus on publicly accessible beaches between 1990 and 2002. From 2003 until today, beach clubs started to develop both inside and outside the capital, until an estimated 300 had been constructed along the country’s 225 km coastline. With more competition to win over beachgoers from a population of just 4 million, and around 2 million tourists annually, operators have been forced to change up their offerings to stand out in an increasingly saturated market.

In a round table organized at Horeca Lebanon 2018 with five beach club and resort owners and managers, it was confirmed that beach clubs and resorts (the latter distinguished by offering accommodation) would not be able to rely on entrance fees alone to survive in the crowded market. Instead, they must differentiate themselves. All of the operators agreed that basic beach facilities were no longer satisfying customers, who are looking for a memorable experience worth sharing on social media.

While some clubs/resorts have developed new facilities to attract customers of all ages—such as the inflatable play area for children introduced this season by family resort La Siesta in Khalde—others followed market demand. For example, CFlow in Jbeil, shifted their entire concept from an adult-only resort to a family friendly destination. Allocating a budget for concept enhancement was also a strategy followed, for example, by Lazy B when it undertook an extensive enhancement of its facilities.

Hiring seasonal staff is one of the main challenges in the beach club industry, which is why some businesses that operate year-round rotate staff through their various outlets to ensure trained individuals are always available depending on each outlet’s needs. With Eddésands leading the way in 2003, an increasing number of beach resorts have been boosting their revenues by offering additional services such as beds, huts, and cabins for daily rental. Today, according to Amber Consulting’s market research in 2018, about 55 percent of all Lebanese resorts offer private zones and beds.

This market research also showed that food and drink represent 70 percent of beach clubs’ revenues. Thus, the majority of Lebanon’s beach clubs are focusing on their food and beverage offerings by adding new outlets and catering events, such as beach bars, grills, snacks, and sunset parties. An increasing number of beach resorts—especially those in Beirut such as Riviera, Kempinski, La Plage, Saint-Georges Yacht Motor Club, La Siesta, and Mandaloun—also choose to operate year-round, especially through their restaurants. 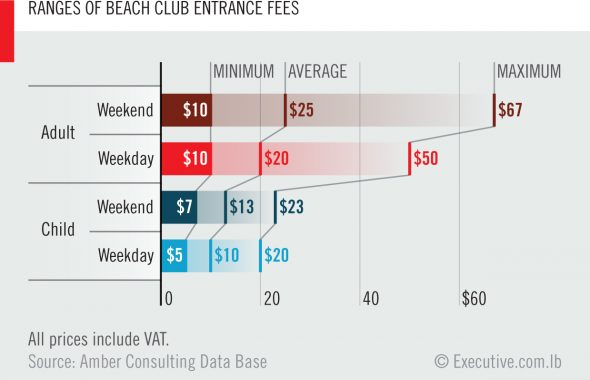 To accommodate the shift in people’s needs and habits, beach clubs as well as beach resorts have tried to target different market segments. Starting in 2010, these attempts have seen “ladies only” clubs and resorts open south of Beirut, such as The Palms and Bella Mare, as well as those aimed at the family market. An example of the latter is Aqua Ville, which opened in Jiyeh in 2014 and draws in Lebanese families with attractions targeted at children. Heading north, you find a different concept: beach bars that are also considered the ideal spot for water sports. There are also a growing number of clubs and resorts that are adult-only, such as Orchid Beach, which has an over 21 policy, and Mandaloun Beach Club, which also targets adults. Moreover, Eddésands, Laguava, CFlow, Janna Sur Mer, and La Siesta offer amenities for overnight stays (for more on resorts see article page 22).

However, adopting a unique concept is not enough to ensure the success and survival of a beachside operation. In this highly competitive market, attracting the largest share of customers demands the offering of discounts—particularly on entry fees. Beach clubs and resorts use these discounts as marketing tools to promote their premises on social media and to target different customer segments by offering, for example, special prices for women, children, or early birds.

Other beach clubs and resorts offer free entry, counterbalancing their profits by focusing on the food and beverage incomes that are mainly generated by young clients. A third strategy designed to draw in customers is the use of online offers, available on platforms such as Makhsoom or Gosawa.

Dealing with competition for customers is not the sole challenge for beach clubs/resorts in Lebanon. Complicated construction and operational permits still constitute a barrier for owners, and, more recently, the challenge of securing subsidized loans has surfaced.

Since early 2018, financial institutions have been reluctant to grant long-term subsidized loans to the hospitality industry, as the deposit interest rate is increasing while interest rates on subsidized loans are capped by Banque du Liban, Lebanon’s central bank. In addition, limited financial encouragement from the government, such as the reduction of electricity fees, municipality taxes on rent, and taxes on profit, constitutes another financial challenge for owners. Meanwhile, IDAL, the Investment Development Authority of Lebanon, requires businesses to employ a minimum of 200 annual NSSF-registered  workers in order to be considered for funding. This requirement tends to block applications from beach clubs/resorts, as their seasonal nature makes it near impossible for them to meet this target.

Meanwhile, the outdated categorization of these operations limits the ability of customers to identify the level and standards of their offerings and of their in-house facilities, such as spas, wedding venues, and food outlets.

Paying a fortune to spend a day at the beach has become less appealing for Lebanese families, who are nowadays thinking twice about spending a day on Lebanon’s coast. Public beaches are not a viable alternative to private clubs, since, for the most part, they are not maintained and managed by municipalities and lack basic beach facilities, such as sunbeds and sunshades. As such, nearby countries such as Egypt, Turkey, Greece and its islands, to name only a few, are gaining in popularity among Lebanese families. 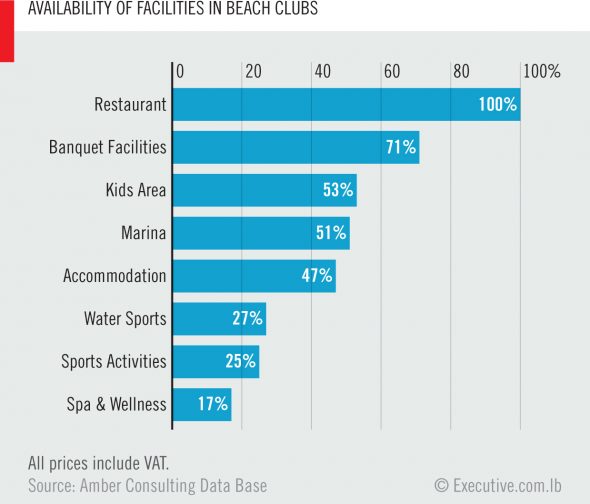 With the extensive offers from Lebanese travel agencies, which are aggressively promoting foreign beach destinations with direct charter flights, traveling abroad for vacation has become a sought-after alternative. From affordable destinations with all-inclusive resorts to fancy islands with internationally renowned beach clubs, all demands can be met by the various and diversified packages.

Is it necessary for Lebanon’s beach clubs and resorts to adapt their concepts to market trends and needs? According to those who have adopted various strategies to stand out in this highly competitive market, it is. Some of them have shifted their offerings to draw in more customers, others have used price reductions to achieve the same. As for those who decided to bunker down and wait for “market prosperity”—where are they now?

Cocktails with a sea view