Home BusinessFinance The irrational hand of the market

The irrational hand of the market

The third trading week in Ramadan was the third week of near universal index gains in the securities markets of the Middle East and North Africa. Volumes were mixed, with the anticipated summer slowdown happening in some markets but certainly not all around the region. The indices of the ASE and BSE in the Mashreq and of Saudi Arabia’s Tadawul receded by small margins — but Dubai produced yet another crazy show. 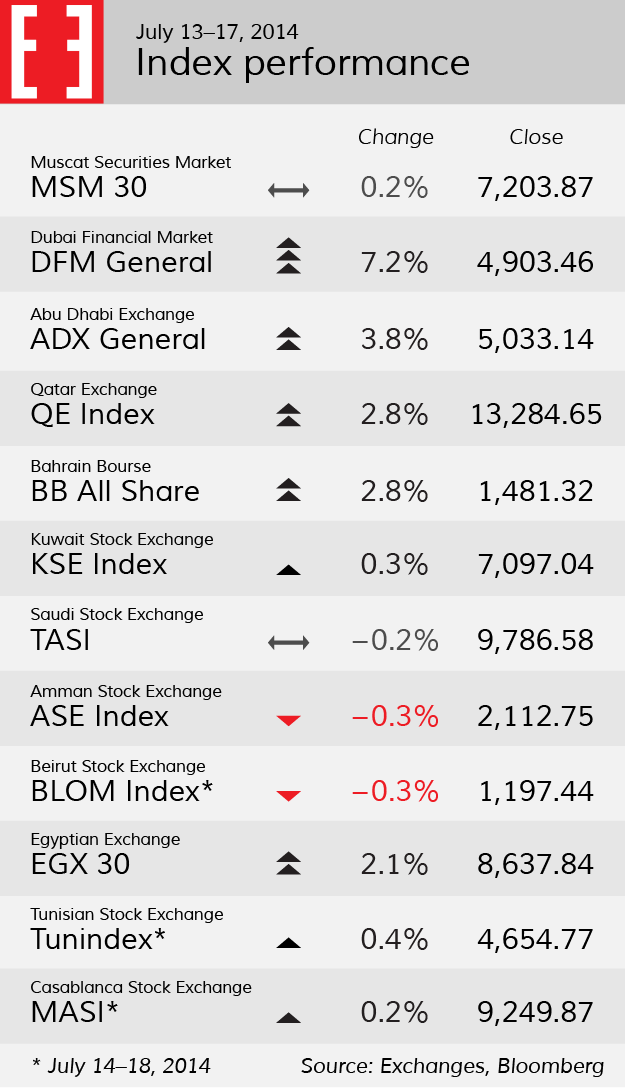 Kuwait broke out of summer lull with comparatively high volumes and an intraweek spike driven by small caps but settled on a low gain in its weekly balance after profit taking on Thursday. Bahrain, albeit on low volumes, advanced to its highest index reading in four years before closing week 29 a tad below this peak. Oman’s MSM 30 set a new six-year record, narrowly topping the previous high reached in January 2014. The Oman Daily Observer reported that banking stocks were driving index gains there.

The TASI traveled sideways as trading activity fell in line with summer volumes and earnings forecasts. Sabic, the market cap leader on Tadawul, reported 7 percent higher earnings for the second quarter when compared with Q2 2013. Amounting to $1.72 billion in quarterly profit, Sabic results represented no departure from expectations, but some Saudi real estate and mid-cap petrochemical companies delivered lower than expected growth when reporting during the week.

But then, the volatile trio

Indices for Dubai, Doha and Abu Dhabi exhibited a third week of gains that also marked a third week of some investors’ faith in these markets that was simply confusing. Given that the three bourses — with no important changes in underlying economic and overall corporate performances — rose just as precipitously in July as they had waned in June, the three markets currently appear to be neither bull nor bear but just irrational.

This was reinforced by the fact that it was once again a page in the Arabtec narrative which provided the main impetus on the weekly performance of the DFM General Index and its 7.2 percent gain. Incredibly, buying of Arabtec shares shot up not on confirmed news but on an unconfirmed media ‘scoop’ when Bloomberg reported possible talks about a share deal between Arabtec’s biggest institutional — if one wants to call it that — investor, Abu Dhabi-controlled Aabar, and the company’s biggest individual shareholder Hasan Ismaik — until last month, Arabtec’s chief executive.

Rumors of such negotiations appear to have already been circulating earlier in the week and Bloomberg cited nothing more than a single uncorroborated source — “a person with knowledge of the situation” — but the hypersensitive market responded with demand that translated into an unbelievable one-day gain of over 13 percent in Arabtec’s share price. Because Arabtec did not issue a timely statement in response to the rumor, UAE market regulator SCA pulled the emergency brake surprisingly fast, and on July 17 suspended the stock from trading until the company provides clarification.

As Aabar produced a response but no clarity on the next trading day, July 20, the contractor’s nasty tale is certain to have further chapters written during this summer.

Meanwhile, at least one Dubai-listed company could not prop up its repute, but certainly its earnings, with a healthy contribution by the extremely high turnover in Arabtec stock in recent months. DFM.CO, the listed operator of the Dubai Financial Market, at the end of week 29 disclosed a 263 percent improved net profit of AED 252.5 million ($68.7 million) for the second quarter of 2014 when compared with Q2 2013. For the first six months in 2014, the operator, which derives its revenue mainly from trading fees, reported a year-on-year 384 percent net profit hike to $127.3 million.

Taking a look at global scenarios these days speaks to the fact that economic faith is neither rooted in perfect reason nor free from existential risk. When United States Federal Reserve Chair Janet Yellen presented the Fed’s Semiannual Monetary Policy Report to the US Senate’s banking committee and the financial services committee in the House on July 15 and 16, she delivered a series of not particularly remarkable statements that told the government and the markets that the economy was developing according to plan as per the Fed’s objectives of “maximum [American] employment and price stability,” the, later referring to the 2 percent US inflation target.

Apart from very minor points on small biotech and social media stocks which were not part of her spoken testimony, she said nothing that the markets, judging by index responses such as a new record close on the Dow Jones Industrial Average on Wednesday, did not want to hear. Then, moving into the final quarter of her testimony, Yellen’s prepared notes entailed a particularly unremarkable sentence: “Of course, the outlook for the economy and financial markets is never certain, and now is no exception.”

The grave potential for uncertainty in the global economic outlook was confirmed while her chair in the hearing room was still warm. That was when some mad dog of war pushed a button somewhere in Eastern Europe’s relatively new crisis zone and murdered nearly 300 people traveling above in a civilian airliner.

Gold rose and equity markets shuddered upon news of the disaster over Ukraine and of the latest Israeli ground invasion of Gaza — but only for a single volatile day of 1-percent range drops in Dow and S&P 500. On Friday, the focus in US equity markets was back on better-than-projected second quarter earnings with the Dow jumping back above 17,000 points and the S&P 500 rising 1 percent.

Only one stock listed in international markets, ticker symbol MAS, was heavily impacted by the disaster. Malaysia Airlines, which was hit this year by an unprecedented duality of aviation disasters after decades of sound operations, is now threatened in its existence.

Immediate reactions to the destruction of MH17 said that the 298 victims alerted the world to a crisis that was mistakenly believed to be far away, even in a country like the Netherlands where the latest violent confrontation on the European fringe has just now been felt in all its cruelty due to the many Dutch passengers who died.

Ukraine, however, is only one geopolitical threat of 2014. No archduke was assassinated in the Balkans in the middle of this year, as it happened on June 28, 1914 in Sarajevo, but hundreds died needlessly last week in Gaza and over Ukraine. Developed and developing markets alike are in no way immune to the thickening dangers in current geopolitics, and the indifference of markets to these political risks and the humanitarian catastrophes that come with them is a sign of dangerous complacency.

In photos: The creative cave