“Men are preoccupied with two things: politics and sex” says Aleppo-based 70 year-old artist Saad Yagan. And that’s why many of his paintings depict men either having heated political debates or dreaming about – often nude – women. With his first solo show at the Mark Hachem gallery in Beirut ongoing, Yagan is in town to reconnect with friends and tell people that he is surviving and still working. He’s built an impressive contact list since his first exhibition in Beirut back in 1971.

A raid on his studio

The Syrian crisis has not been easy on the artist. In 2011, his former studio, 18 kilometers outside of Aleppo, was raided by the Al-Qaeda affiliated Nusra front. They set fire to 22 large paintings and his library of books because they considered his work haram, an Arabic term meaning sinful.  With Al Nusra still occupying his former studio, Yagan moved to another one, also in his hometown. “Aleppo is like Altico [superglue] to me,” he says as he brushes his handlebar mustache. He wouldn’t consider living in any other city.

After taking two years off from painting, he grabbed the brush again this year.

As you walk through the gallery, you cannot help but notice a large black, white and red painting entitled “Upward Fall.” Painted this year, it represents the Syrian crisis and is the artist’s favorite piece in the exhibition. 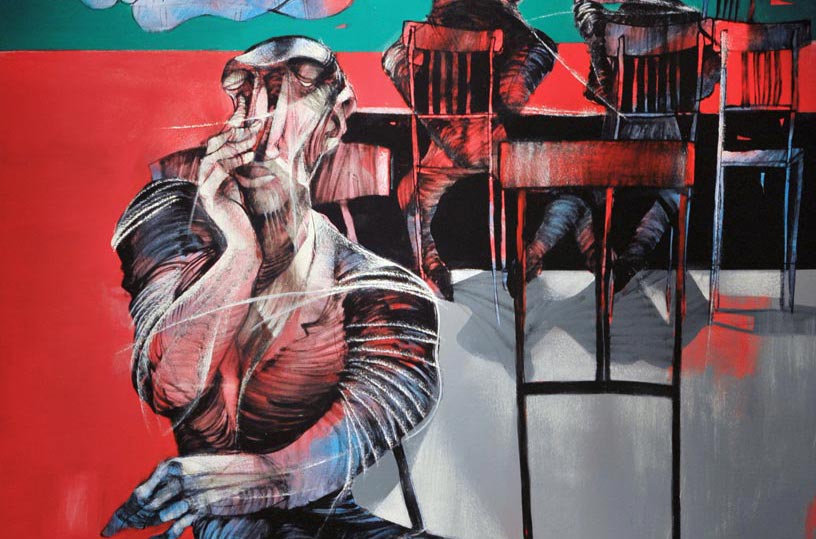 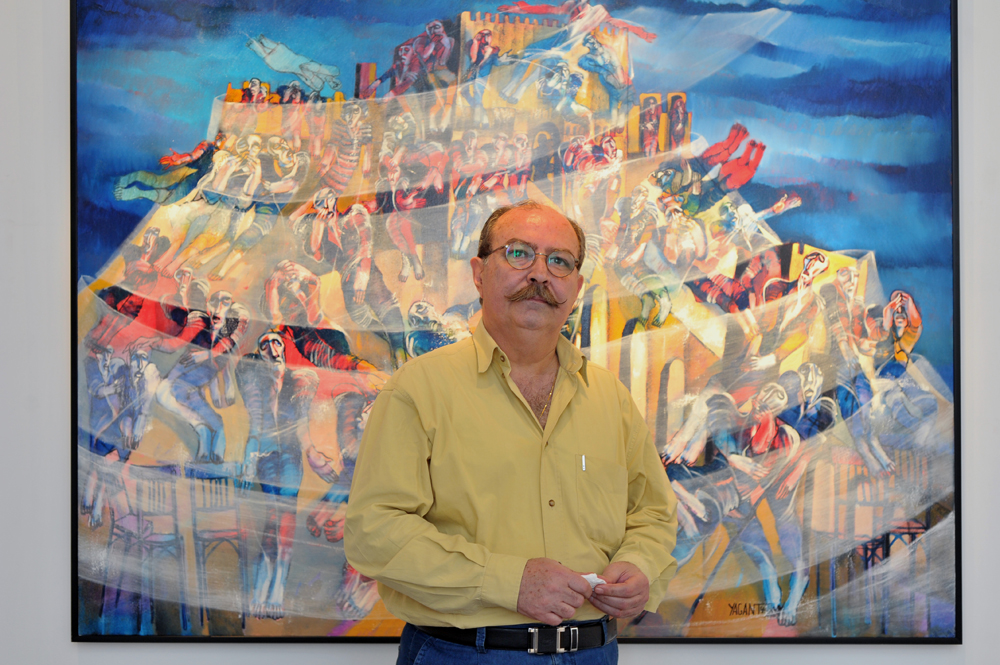 Saad Yagan with "Aleppo's Fortress" in the background 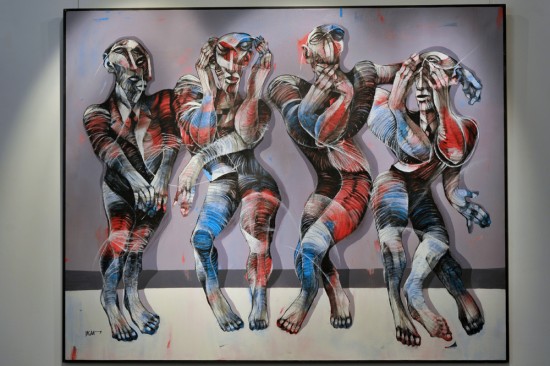 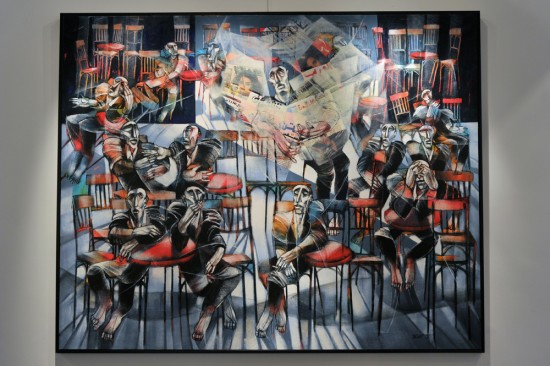 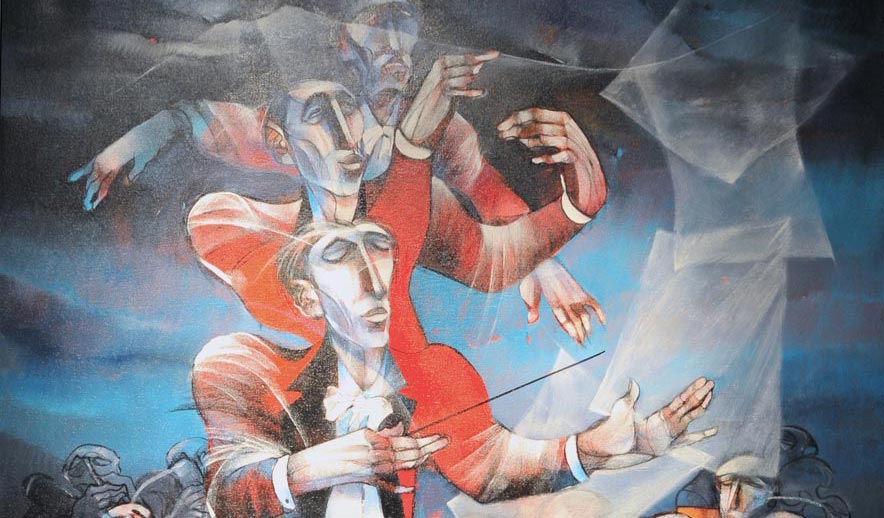 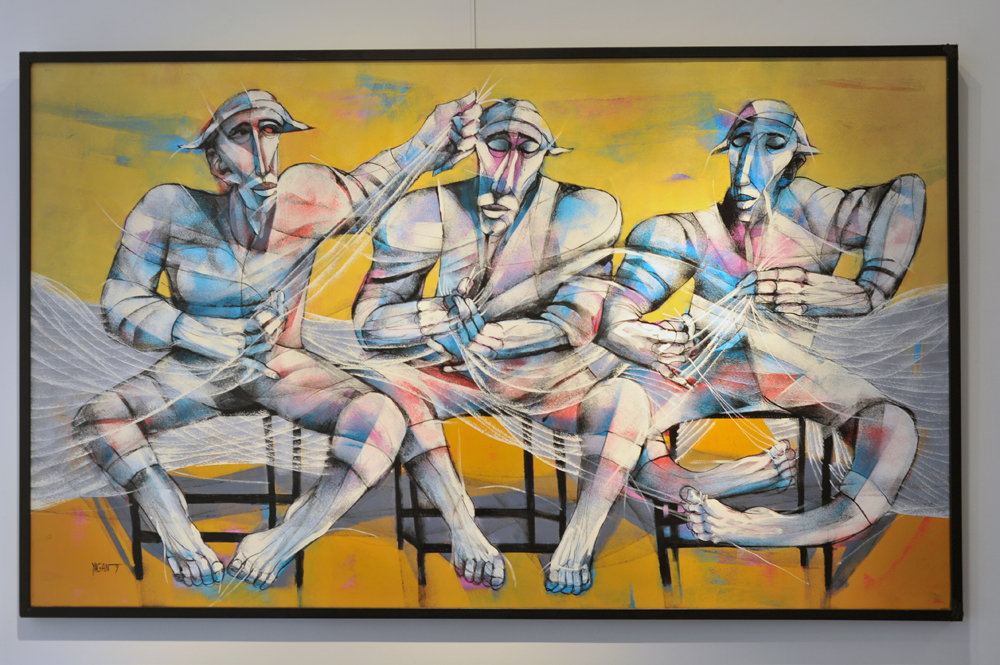 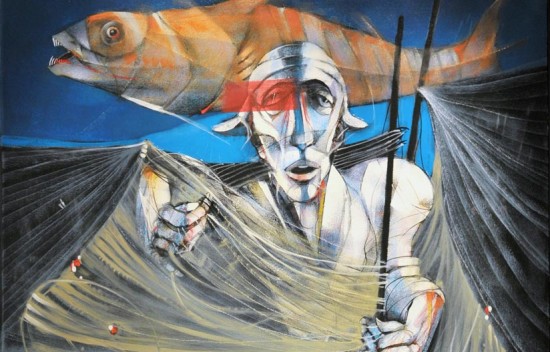 The Sheikh and the Sea

Some of the art available on show at the gallery

Taking his first brush strokes at the age of 13, Yagan started painting to impress his neighbor’s daughter whom he had a crush on. But his art impressed more than just his muse. By the age of 18, he had his own solo exhibition at the National Museum of Aleppo. And from the walls of Syrian galleries and museums, his art pieces were hung in galleries in Europe, Canada and the United States.

Yagan’s art is universal as it portrays human feelings and psychology. Most of the pieces exhibited at the gallery were completed prior to the Syrian crisis and do not portray Aleppo or the civil war. He stresses that love, jealousy and other human feelings are the same whether you are in Japan, Denmark, Syria or Sudan. From boredom, to depression, to loneliness, his pieces look to reveal what people are thinking. “People mix in coffee shops and public places but deep down inside, they have a completely separate psychology and are each on their own,” he says.

His main aim is to illustrate oppressed people who are aware of their problems but unwilling to find a solution. He wants viewers to receive that message and think whether maybe they can do something. “Wherever there is a humanitarian crisis, the message in my paintings apply,” he says.

Going forward, the artist expects that his art will most likely depict Syria’s turmoil. “I’m thinking of what I’ll do as a painter with something completely different than photography as I want to show the inside of the problem,” he says; a picture that will undoubtedly be difficult and painful to illustrate.

Maya is a research consultant on Arab youth entrepreneurship and employment. She headed Executive's banking, finance and entrepreneurship sections from 2011 to 2013. Previously, she worked at JP Morgan in London in equity sales for three years. She holds an MSc in Accounting and Finance from the London School of Economics (LSE) and a BA in Economics from the American University of Beirut (AUB).