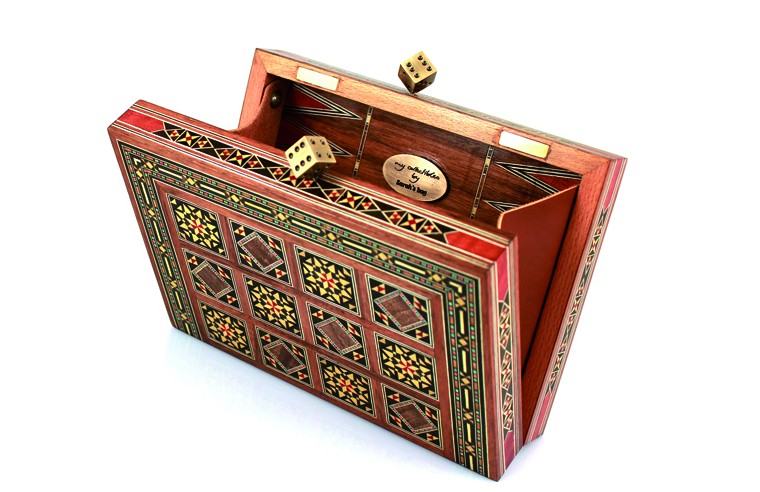 While doing research for her master’s thesis on women and prostitution at Saint Joseph University in 2000, Sarah Beydoun probably never thought she would end up being the creative director and founder of Sarah’s Bag — a high end handmade brand of handbags and fashion accessories. The business currently employs 200 underprivileged women, has its own boutique in Gemmayze and 22 global points of sale.

It all started in 2000 when, upon the advice of Dar Al Amal — an NGO she was working with for her thesis at the time — Beydoun got a permit to work with women in the Baabda prison on a social project to empower them through income earning.

Beydoun started working with four women in prison, two of whom were Mexican and were already skilled in embroidery. She trained and paid them in exchange for embroidery handwork. Starting with bracelets, which Beydoun says did not look good, they quickly moved into handbags, an accessory item which was in the fashion spotlight because Fendi’s colorful Baguettes had just hit the Lebanese market.

“I started with the first canvas that I beaded myself and it was a ‘eureka’ moment for me. For two months I couldn’t sleep as I had all my ideas pouring in. I really felt I had found my calling: I wanted to do something that was creative and I wanted to help society,” recounts Beydoun.

The project took off quickly and, in just three months, four women became 20 with all the handwork pieces completed by them in prison and taken to a specialized handbag artisan to be assembled. Beydoun reinvested the money she made from customers’ orders to buy all the needed supplies, thus sustaining her business.

After two years, with Beydoun receiving more orders and having to meet deadlines, she had to move most of the business out of prison. She started recruiting the girls who had finished their prison terms whom she had trained and had a good working relation with.

With time, the two-step production business Beydoun put in place — handwork embroidery pieces made by the women that then were turned into handbags by the craftsmen — has evolved and Beydoun now produces a winter and summer collection, with an occasional capsule collection in her Beirut boutique.

The way it works

Beydoun devised a system whereby the women working with her are divided into groups, based on the craft they are specialized in (such as embroidery, crochet or beading). Each group is usually headed by a woman who was previously in prison and has worked with Beydoun from the beginning.

The group leaders pass by the offices in Gemmayze at scheduled times, pick up the sketches and divide them among themselves and the women in their group to produce the pieces at their homes. Once completed, they deliver them to the office and get paid per piece.

The group leaders are also responsible for ensuring the pieces delivered are up to the standard of quality and for deciding on the percentage of income each group member receives, with guidance from Beydoun and her financial team. This business formula does not provide the job security and social benefits of regular employment to the working women, but enables them to make money from home and is a viable alternative to other rural jobs, according to Beydoun.

Once the handwork is delivered to the office, Beydoun takes them to one of the eight ateliers across Beirut which are specialized in making handmade handbags. Beydoun prefers to work with craftspeople instead of manufacturers as it allows her to be more creative, and to customize the details of the bag, such as the zipper or the inner lining. “It’s more artisanal that way and better because they take special care of what they are producing, which in turn helps me in quality control,” explains Beydoun. To date, she outsources handbag making as she believes it allows her more time to focus on her forte, creativity.

Such a grouping and division of labor, explains Beydoun, ensures her brand remains protected from replication at any step of the process.

This growth into a full-fledged business was not part of the initial plan of making bags in prison and selling them. However, as Beydoun explains, this growth was necessary to be able to produce collections of high quality bags. “The women who were working with me were an inspiration as they would approach me with different traditional crafts and I would find a way to modernize and turn them into handbags,” says Beydoun.

Even though, at most, 50 of the 200 women employed by Beydoun are in prison, she always reminds her team of the company’s social responsibility in working for the empowerment of underprivileged women by providing them with opportunities to generate income. Today, Beydoun does not use the embroidery pieces produced in prison due to quality concerns. However, she continues to pay the women in order to encourage, train and invest in them.

The combined tales of handmade luxury and social empowerment of underprivileged women, including a reference to prostitution, feature prominently in the marketing narrative. “There is an increased appreciation for these handmade crafts in the fast paced life of today,” says Beydoun.

The first few years for Sarah’s Bag were mainly in Lebanon, with expansion limited to annual exhibitions in a few cities in the region. After nine years, however, Beydoun was curious to see how far she could take her brand. She decided to expand her business globally and went to her first international trade show exhibition in Tranoï, Paris.

Beydoun recalls that the first show did not go well as she was inexperienced in managing her brand in these types of exhibitions and also unsure of how the international market works. “But I learned my lesson; I learned to select my items, how to do a catalogue … And the next time I went, it got better and it still gets better every year,” she says.

Today, 70 percent of items from Sarah’s Bag are sold abroad, with the rest sold locally. Beydoun says this division occurred only in the last year and a half, when the situation in Lebanon worsened. Before that, she enjoyed an even division of sales. The local sales, says Beydoun, were driven by tourists from the Gulf who saw in her bags a special cultural memento of Lebanon.

International exposure made Beydoun realize that her handbags’ most vital selling points are their aesthetics and quality level, not solely the story of how they are made. “I always had in mind that we should sell the bags regardless of who produces them: the story is not going to sell the product, it will back it up,” says Beydoun, adding that some women own her bags without knowing the background story.

To ensure quality standards are met, Beydoun has several control stops at different steps in the handbag-making process. Prior to beginning their work, Beydoun asks both the women and the artisans to sign a document committing to abide by several quality specifications.

This quality control document has the advantage of helping those involved in production shift their mentality toward the upscale market, a feat Beydoun considers one of the challenges in her work. “They know how to do it, but we need to consistently remind them that we are a luxury brand selling in Europe, and this is why they demand this much attention to detail,” says Beydoun.

As for aesthetics, Beydoun says her team tries to be tuned in to fashion trends so women buy the bags. “People are not interested in traditional crafts unless you package them in a very modern way and make them trendy,” she says.

The future for Sarah’s Bag

Beydoun speaks enthusiastically about the future of her company, saying she first wants to sustain the growth achieved this year and, ultimately, aims to have a series of boutiques outside of Lebanon. “Through these boutiques, I will not be limited to what the buyers select from the collection for their boutiques and will have more control by displaying my whole collection,” she explains, adding that this way consumers will have more of a choice from her wider collection, instead of being limited to what the boutique owners select.

For now, Beydoun’s eye is on a shop in Dubai, due to its proximity and her connections there. She will explore the possibility of working with the locals there to revive certain crafts, using a similar model to the one she used in Lebanon.

Beydoun has faith in Lebanon and its designers but says the country as a whole needs more promotion of and confidence in brands that are “made in Lebanon.” Beydoun recalls how when she first started her business, few would carry handbags made in Lebanon but that quickly changed as she built her brand.

Today, says Beydoun, many fashionable Lebanese women proudly wear locally made designs, and she points to accessories made by such designers which she wears with pride.

Local designers, Beydoun believes, should also have confidence in the country’s artisans. They should continue producing luxury goods in Lebanon instead of shifting their production abroad when they become successful. “We have a lot of talented craftsmen here and this should not go to waste. Our traditional crafts should not die,” she says.