Bike messengers are a new sight on Beirut's streets

After six months in business, Deghri Messengers s.a.r.l. – out to prove that bicycles are faster, cleaner and more reliable than cars and motorbikes – is firmly in the saddle as the first bike messenger company in the Middle East.

Deghri employs two full-time messengers, two part-time riders, and one dispatcher from their AltCity base in Hamra.

Starting with non-profit organizations as a core client base helped a lot, says Matt Saunders, one of the founders. “Particularly with Abaad, they turned out to be a very reliable client, and they introduced us to others so that we now have a fairly wide range of clients in the NGO field.”

The Swiss Agency for Development and Cooperation (SDC), based in Hamra, started to rely on Deghri in October last year, switching from a scooter-based delivery to the non-motorised Deghri modus. “Our decision was based on the fact that Deghri are bicycle-based and environment-friendly and are a young company, managed and operated by young people,” Hala Acouri, Finance and Admin officer at the SDC explains. “For us, their commitment to deliver the documents on time at low cost is key,” she adds.

Deghri’s growth has mostly been through word of mouth and social media. The company has successfully broadened its client base and diversified to include businesses and private clients. “We’ve had the odd random person sending a laptop to be fixed, dropping off invoices and picking up checks. A trucking company, education centers, universities and increasingly private individuals … translators and lawyers call us,” Saunders says.

A standard delivery request (within three hours) costs 9,000 LL ($6), while rush service (within one hour) costs an additional 3,000 LL ($2), and chilled service for same day delivery when sent before noon or overnight costs 6,000 LL ($4). Customers must pay in cash. Deghri operates between 8 am and 6 pm during the week and half-days on Saturdays.

“Our main costs are dispatcher and messenger salaries – all of these work on a part-time, freelance basis and messengers are paid a commission for each delivery. Then come phone bills – we use WhatsApp as much as possible to save costs – and spare bike parts. For the insurance we have a generous sponsorship deal from Elite Insurance Consultants,” Saunders elaborates.

“Nothing got lost so far and we’re insured against loss or damage. We insured the riders with personal insurance and we’ve recently secured the items we carry up to $2,500,” Saunders explains.

It took the riders only one month to make back their $6,600 in start-up costs. After six months in business, Deghri has doubled its monthly revenue, Saunders said. 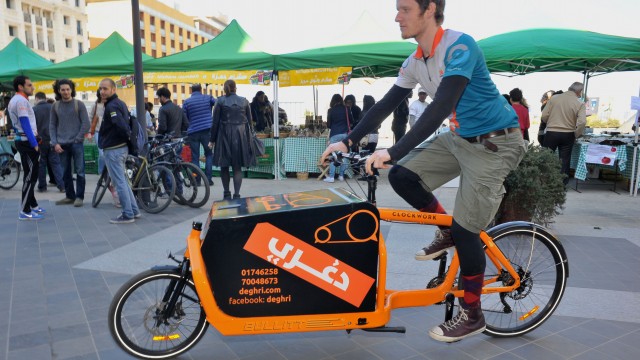 And they are innovating, too, seeking to expand their services. ‘The Bullet’ (pictured above) is the latest Deghri member, donated by the Danish Embassy in January. It allows a messenger to carry heavy bulky items up to 60 kg. “We are still very flexible with it, it’s narrow, well engineered and we can get people’s packages out in time – only a tad slower. It also allows us to expand in other ways: we’re starting to reach out to businesses like restaurants and others within the gastronomy sector.” Deghri presently delivers for Achrafieh-based Roger le Boulanger, taking his artisan sour dough breads across Beirut. “We hope to be able to do more things like that,” Saunders says.

Deghri approached Souk el Tayeb and is now present at the Saturday farmers market. “Heavy things get sent home with our Bullet. The positive effect we aim for is for people to leave their car at home, walk to the market, save parking, shop and send their groceries home with Deghri.”

Plans for 2014 include overhauling the website, expanding work with the Bullet, increasing food deliveries, and attending the European Bike Messenger Championship in Stockholm. Deghri is also considering introducing accounts that would allow customers to pay at the end of the month.

In photos: The forgotten poor