Steady, if not remarkable, progress in Lebanese insurance industry

The Lebanese insurance market is achieving steady economic performance with incremental business innovations, all the while making very small steps in addressing long-standing issues and concerns.

Despite the difficult macroeconomic context of Lebanon’s distressed security and economic environment, the latest available data on insurance premiums are mostly in positive territory. Total gross premiums in 2013 reached $1.42 billion, up from $1.31 billion in 2012, and the growth in annual premiums doubled from the rate achieved in 2012 according to the figures published last month by the Association des Compagnies d’Assurances au Liban, ACAL, in its quarterly report. 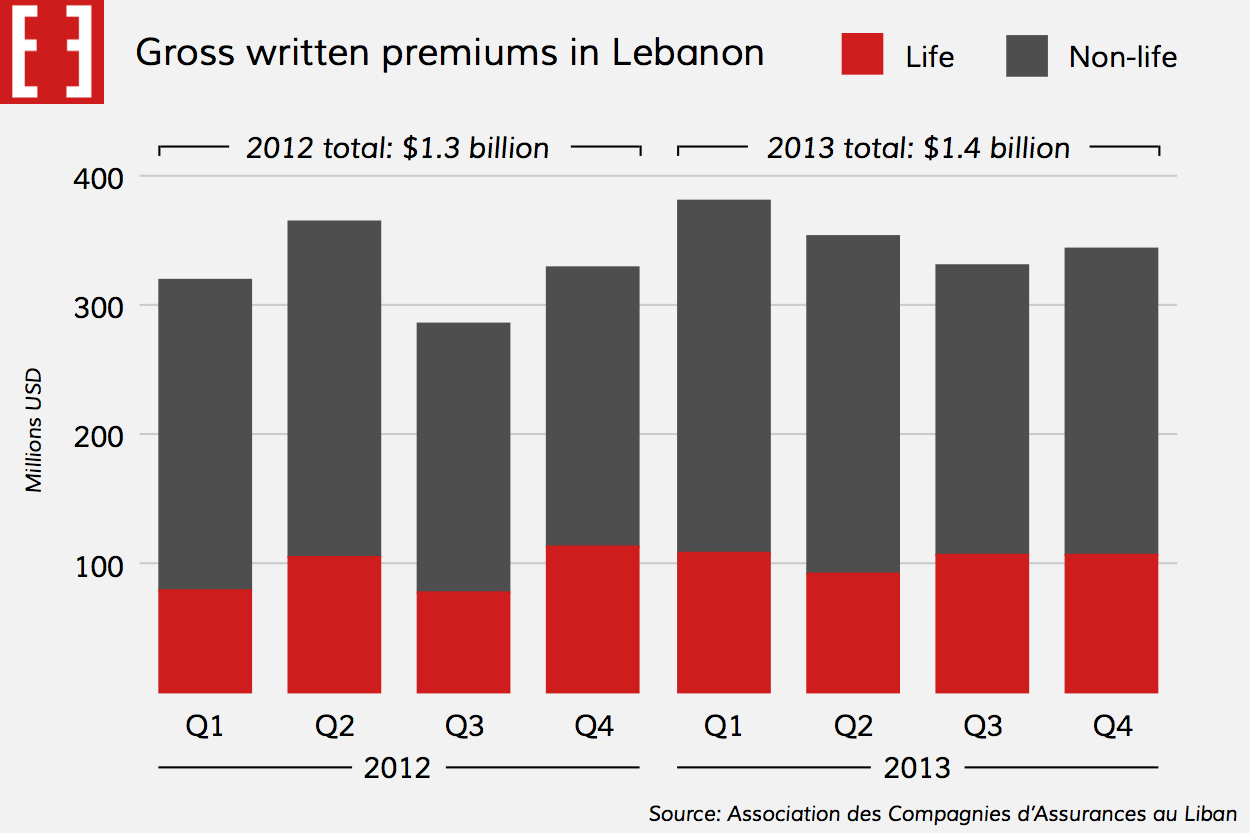 The Insurance Sector Annual Report for 2012 by the Insurance Control Commission (ICC) at the Ministry of Economy and Trade shows a small upward variance, of about 1.5 percent, when compared with the 2012 gross premiums figures that ACAL first published one year ago.

The ICC’s report, whose initial issue on 2007 came out with a massive time delay, has since grown significantly in content and speed of production and the 2012 report was published in the first quarter of 2014 at the shortest ever interval to the year covered.

The ICC’s official report is based on the full data from all insurance companies, whereas the ACAL quarterly includes a near 11 percent share of data that is extrapolated. While both reports are produced from the same official data supplied by the insurance companies, the extrapolation used in the ACAL report is due to the fact that not all companies in the sector participate in the voluntary submission of information on which the quarterly report is based.

Given this methodological caveat, the small variance between the 2012 data that the two reports have provided with a time distance of about one year is an indicator that ACAL’s publication on 2013 gross premiums, which indicates nominal growth of 9 percent in the past year, is an accurate presentation of healthy sector developments and newly accelerated growth. The 9 percent growth rate in 2013 gross premiums compares favorably with the 4 percent growth in 2012 shown in the ACAL Q4 report and the 5.6 percent growth in the ICC’s report for the same year.

[pullquote]In 2012, the most recent year for which confirmed company-level data are available, six insurers controlled more than 75 percent of the life insurance market.[/pullquote]

The total value of paid-out claims and life insurance benefits in 2013 amounted to $733.7 million, up 11 percent from 2012. The largest share of claims occurred in medical insurance, with $293.4 million or 40 percent of total claims. Insurers paid out $188.6 million for motor claims: 25.7 percent of total claims. Notably, medical insurance is the business line where the percentage share of total claims significantly exceeds the line’s share of total premiums, namely by 11 percentage points;  the year-on-year increase in settlements of medical claims amounted to $35.5 million, an expansion by 13 percent. Paid-out life insurance claims and benefits stood at $161.3 million in 2013, or 22 percent of all claims. 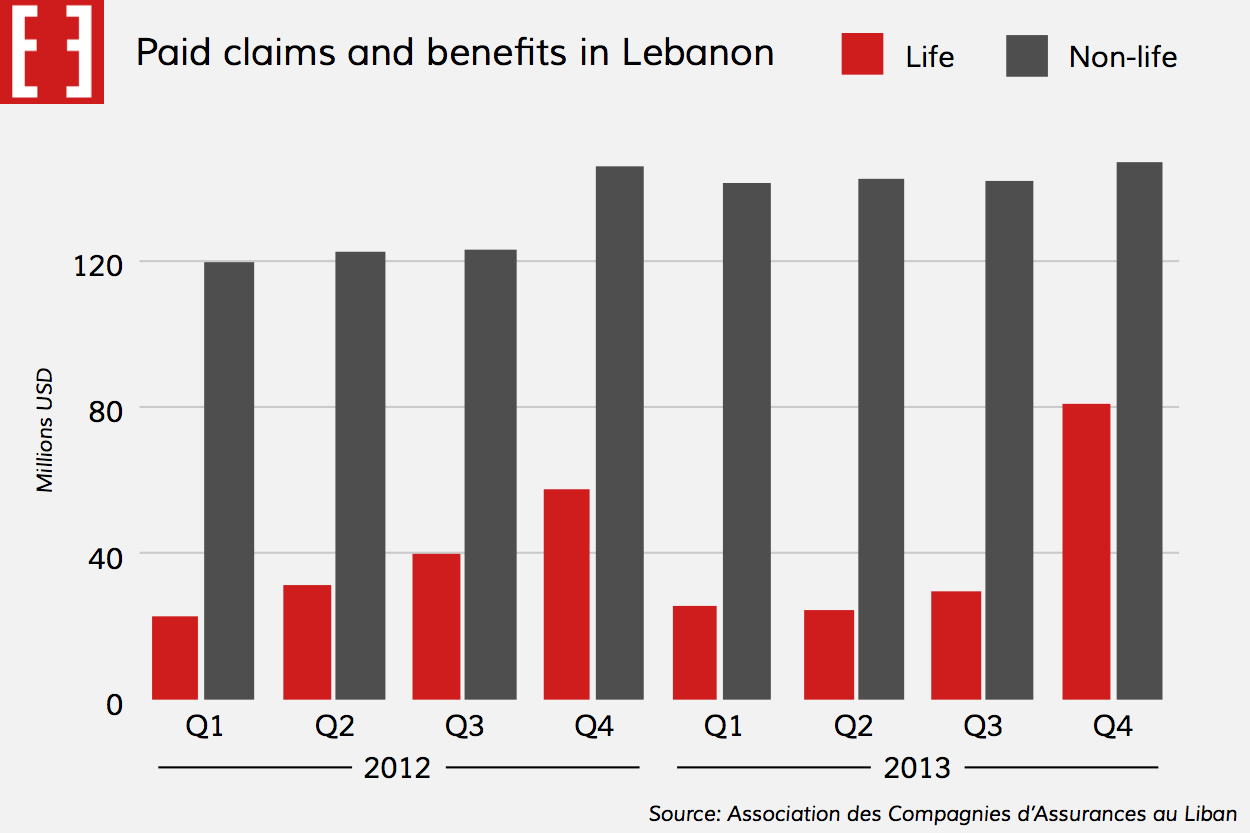 The market for life insurance has two key drivers: consumer demand for credit and demand for savings products. In terms of product splits between savings, unit-linked savings, and protection-only contracts, a comparison between 2013 and 2012 suggests that more than two thirds of the growth in life insurance occurred in the protection-only policies.

Protection-only policies are generally imposed by Lebanese banks on loan clients — as backup security covering a bank’s risk that a client’s disability or loss of life would make loan recovery impossible. Closed for the duration of a loan contract, the policies create no direct financial benefit to the insured’s family, even in case of death, because the policy’s purpose is to satisfy the lender.

The demand for retail borrowing, and specifically home loans, has greatly increased in the past few years and was bolstered in 2013 through central bank subsidies for mortgage–based borrowing. This supports the assumption that the 47 percent slice of protection-only policies in the life insurance business benefited indirectly, but not insignificantly, from the housing market and central bank measures that supported it.

Unit-linked products, which offer buyers an insurance-based investment tool with shared risk, and savings-cum-protection products, which generally offer lower but less risky returns, mainly have a market among Lebanese with higher earnings who have the means to invest in savings instruments. The statistics of the past three years show a trend of high payouts on unit-linked products in the fourth quarter of each year, with settlement amounts increasing each year. This speaks to a persistent appetite for unit-linked products in a narrow but potent segment of the market.

In 2012, the most recent year for which confirmed company-level data are available, six insurers controlled more than 75 percent of the life insurance market. On the one hand, three insurers affiliated with the top three banking groups by total assets, Audi, Blom and Byblos, cornered a large share of the market; on the other hand, two other providers in this top tier are focused on savings products.

No scientific study of the links between the housing market and the demand for protection-only insurance products has been conducted, and, according to the ICC, analysis of life insurance data faces continual challenges in segregating data for product types under the formats in which companies report them. However, the ICC pointed to the negative impacts of the domestic mortgage market and international financial markets on the protection and savings branches of life insurance in 2012.

Implications of the premiums data reported in the non-life, or general lines, of business show stability in the medical and motor insurance lines, which — according to the ACAL Quarterly — account for a combined 52.9 percent in the total insurance market in 2013.

While rising hospitalization costs were a major concern to many insurers in 2012, companies moved to hike their premiums and/or instigate cost-cutting measures. The sector’s most pronounced issue of concern in 2013 and the first quarter of 2014 was motor insurance, due to the impending enforcement of the 2012 traffic law which stipulated that motorists have to acquire third-party liability cover for material damages resulting from accidents they cause. Although the deadline for enacting this compulsory insurance passed last October, the implementation is still pending.

Since development activity was scaled back increasingly in 2012, developers and contractors needed less coverage under “Engineering All Risk” and “Contractors All Risk” policies. On the other hand, decennial insurance was not affected, because it is a legal mandate but not enforced. After seeing a near doubling of premiums to $11.1 million in 2012, engineering premiums dropped 6 percent to $10.5 million in 2013, as the only business line to see a year-on-year contraction of turnover.

The market share of engineering insurance is small, less than one percent of total premiums. But as engineering premiums are concentrated in construction projects and new real estate developments, the slowing of this business hints at the impacts that the challenging economic environment has had on the insurance sector. In non-life underwriting of business other than the contraction of premiums in engineering and the flat performance in cargo, however, 2013 saw the insurance industry defending its turf well, against the slowdown in national economic growth. Small but growing areas of attraction, and new demand in the context of increasingly unforgiving national and regional risks, are political violence insurance and trade credit risk insurance.

As insurance control commissioner Walid Genadry noted in the recently published ICC report for 2012, when inflation is taken into account, sector results in the past three years suggest reduced growth when compared with the evolution of insurance premiums in the millennium’s first decade. This notwithstanding, the ICC documented double-digit compound annual growth rates (CAGR) for the sector in all but one parameter under the 2001 to 2012 time frame.

Non inflation-adjusted CAGR for gross premiums in this period was 11.2 percent, 0.9 percentage points more than the 10.3 percent CAGR in claims paid. Also important, and delectable from the perspective of insurance providers, the sector’s net profits and average net profits per company increased by 18.4 percent and 20.2 percent; thirdly, on the side of technical reserves — funds that insurers are obligated to set aside for the servicing of claims — the companies’ abilities to achieve their all-important risk mitigation mission for Lebanon’s citizenry were increased, with some indubitable assistance from the supervisory authority, by the highest CAGR rates across all measures: 20.4 percent for the sector’s total reserves, and 22.1 percent for average reserves per company.

The one area where the sector showed a single digit, negative CAGR of 1.4 percent between 2001 and 2012 was the number of companies. Although the number of licensed insurers and reinsurers in Lebanon fell from 61 to 52 providers over the period, real consolidation that would put the provider counts in alignment with domestic market potential has yet to happen.

Alas, the regulatory and structural development of the Lebanese insurance industry is another story entirely. It is not about improving numbers or even rules but about changing mindsets and attitudes: a tale of laborious attempts reminiscent of the ancient Sisyphus narrative. As insurance veteran Elie Nasnas declares, “this sector should consolidate but it is not an easy move. We have been talking about consolidation for years [but] most people [in the industry] are in my opinion not mature enough to accept mergers and acquisitions, especially mergers.”

Is the international community failing Lebanon?

The enduring power of memes