Johnny Farah explains how luxury can thrive in Beirut

After a 20 year career designing leather goods in New York, Johnny Farah permanently moved back to Lebanon in 1996 and plans to stay here, for better or worse. Executive sat down with him to learn more about his experience working with leather and hardware craftspeople who produce his luxury leather bags, shoes and belts, known for their simplicity and functionality.

Everything started in 1968 when he was studying mechanical engineering in Denmark. As part of his studies, he had to spend four years in a factory producing hardware. Farah spent his free time designing chandeliers and art pieces in the factory, quickly discovering that he had more affinity for design than for engineering.

Upon returning to complete his college degree, a friend of Farah’s taught him how to work with leather. This led him to take the final decision of abandoning his studies and focusing on his passion, design.

Farah made a name for himself in Copenhagen, designing canvas and leather bags for a company called Form and Colors. In the 1970s, on what was supposed to be a brief visit to Lebanon, Farah found the energy of the country “fantastic” and decided to stay. He opened IF Boutique in 1972, the first in a series of retail stores that sell Farah’s creations as well as items from select designers, on Hamra’s Abdel Aziz Street. IF Boutique sold Farah’s designs of shoes, clogs and jeans, but he was best known for the last two, selling around 40 pairs of jeans and 30 pairs of clogs per day to Lebanese and the region’s fashionistas. “I consider this period my best to date,” he says.

At that time, recalls Farah, the second biggest export in Lebanon was leather shoes and handbags produced mainly in Bourj Hammoud. “They were good quality handbags, not luxury but good, but you have to remember they were doing well because it was before the rise of India and China in mass goods production,” says Farah, explaining that as these countries began producing similar quality leather goods for cheaper prices, Lebanese exports suffered.

With the onset of the civil war, many leather artisans left the country and set up shop in California, where their leather producing skills are still sought after today, Farah notes. He himself left the country for New York, but kept Lebanon’s IF Boutique running despite the war.

In 1979, Farah opened an IF Boutique in Soho, New York, in what was considered a bold move at the time since the area was just starting to develop into the design hub it is today. “At that time, I chose the location because it was where I could find a big space I could afford,” laughs Farah, remembering how IF Boutique was one of the first clothing shops in the neighborhood. The Soho boutique still exists today.

At first Farah sold only clothing, but when he couldn’t find handbags to suit his taste, he, along with two men, began designing their own in IF Boutique’s basement. “The public’s interest grew. At first I was doing it only for the shop, but buyers would see the bags and ask who did them, and so I got into designing leather handbags,” says Farah. He then moved his workshop to Brooklyn and designed from there for 10 years.

Although Farah was successful in New York, he always had in mind to return to Lebanon. And so he did in 1996, moving his entire production with him as well. Farah now produces his designs from Lebanon and exports them to New York where they are sold at IF Boutique. “It might not be a wise decision financially because had I stayed in New York, my sales would have been much higher as I would have been more in touch with my buyers there — but I wanted to be back here,” he says.

When comparing his two luxury leather production experiences, Farah says it’s easier for him to do a collection in Lebanon than it was in New York. Lebanon, says Farah, has more experienced craftspeople with many families having worked in leather or metal hardware for more than 30 years, while in New York, craftsmanship is generally more impersonal and is reliant on factory workers. Farah also finds logistics and mobility easier in Lebanon: he’s able to reach his hardware and leather artisans in Bourj Hammoud, his offices in Mar Mikhael and his restaurant in the Port area all in just a few hours — which is not the case in many other places, where it can take an entire day to get between the office and the factory. Farah adds that production is finished faster in Lebanon.

Farah finds the quality of leather, wood and hardware craftsmanship in Lebanon, when working with skilled craftspeople, to be at the international luxury level. “Lebanon has an incredible amount of people who are really artisans. The problem is that they need help and support,” he says.

Craftspeople in Lebanon today face many challenges, according to Farah, primarily the lack of governmental leadership and an absence of a national strategy to support artisans and develop their expertise. Faced with a significant decrease in exports of their goods, many artisans are not passing their skills to their children. So, as they grow older, and with no one to carry on the trade, the future of craftsmanship looks bleak. In practice, according to Farah, governmental support for all producers could manifest itself in tax incentives, regulations that would provide craftspeople with skills development workshops, social security — something that most artisans can’t afford based on what they make in their small workshops — as well as help in exporting goods.

Another way government could help both designers and artisans, according to Farah, would be to lower taxes on imported goods which are not available in Lebanon, such as machinery or products needed for certain crafts such as leather work or jewelry making. 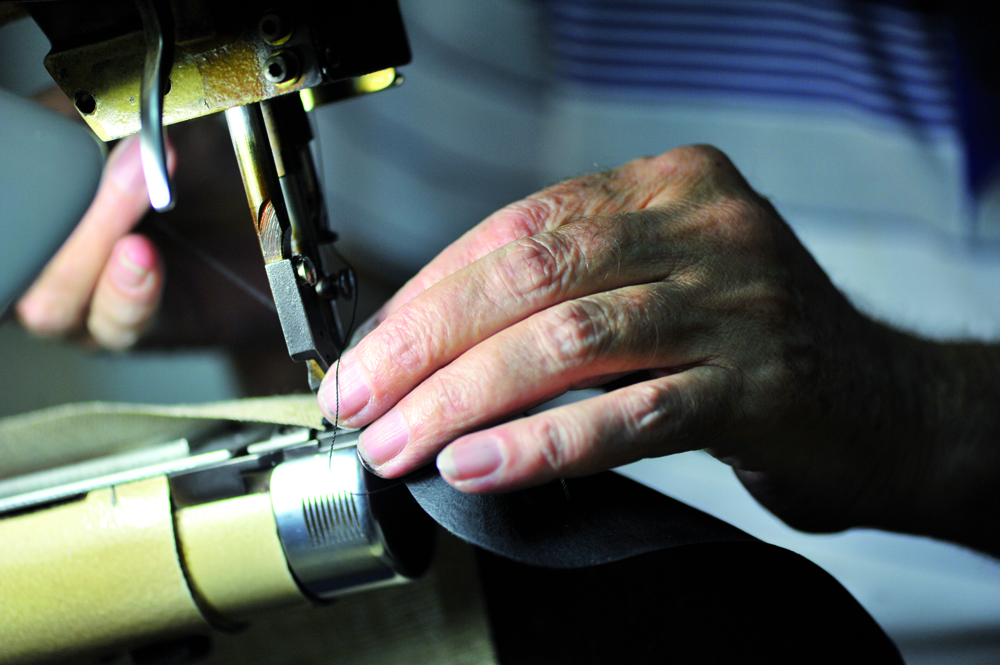 Though some would see the current taxes as offering protection for Lebanese produced goods, Farah does not agree with this and says those taxes might make importing items too expensive for an emerging designer or entrepreneurial artisan who would end up pursuing other career options. “If you really want to be a competitive luxury economy, you have to be able to import what you don’t have,” says Farah, who now has to pay 10 percent in taxes for the machinery and leather he imports from Italy. He thinks 5 percent would be more fair.

In the absence of any governmental action on the above points, those in power could still do some basic things that would offer support, such as providing the industrial areas in Lebanon with electricity during the day and holding off scheduled power cuts until the evening. Farah explains that his craftspeople’s electricity is cut off several hours during the day and since a generator’s bill is more expensive than what they pay for the government provided electricity, they opt not to subscribe to one. This delays their work at times.

Farah sees that Beirut is becoming a design hub with many emerging talents on the scene. “I like Beirut more now in terms of creation than I did in its pre-civil war golden days because, in difficult times, people get more creative in order to survive,” he says.

For these designers to produce what could be called luxury goods, Farah advises them to stay away from copying others and to develop a unique style of their own. “Imitation is what mass producers do, and Lebanon cannot hope to compete in that area; we need to be innovative.”

According to Farah, Beirut has the capacity to produce luxury-quality leather goods and furniture in small quantities and at prices 30 to 40 percent lower than Europe or the US. This is so because labor is cheaper here — even when social security and a decent paycheck are added — and laws are more lenient.

“To sum it up, this country has great designers, good craftsmanship and the facilities to get to factories and places where they do things. All they need is support and help because right now they are struggling all the time,” Farah concludes.

Giving up on local artisans