Over the past few years, it has become common to hear many Lebanese retailers share their woes on dwindling sales as customers bypass the city’s luxury brand stores in a rush to the best sales or promotions.

While these retailers are not complaining without reason, it seems they have done well in adapting to the unstable situation, and have learned how to grow their businesses despite all the obstacles.

No tourists, no worries

In previous summers, tourists from the Gulf countries were seen strolling through the streets of Beirut with tens of shopping bags hanging from their arms. With their gradual decrease in number, starting from 2011, the retailers interviewed by Executive say they have gotten used to the loss of business caused by this, and are working to move past it.

Mher Atamian, managing director of Atamian, explains that while previously 10 to 15 percent of their sales in the luxury watches segment had come from Gulf tourists, they lost that market five years ago and no longer take it into account when calculating their profits annually, adapting instead to the local market and visiting expats.

Izzat Traboulsi, managing director of Fashion Trading Company, the wholesale agents of Hugo Boss in the Middle East, does not believe that Lebanon was a market heavily reliant on tourism, compared to Dubai, where Hugo Boss has outlets as well. He explained how the retail industry there suffered heavily when Russian and Chinese economies were not as solid as before and their nationals’ visits to Dubai dwindled. “Of course we can do much better, and we are losing the extra growth we could potentially [have] reached had [the situation] been normal. But what we are doing today is still good; the core business is doing well,” he says, placing Lebanon as their second best market in the region after the United Arab Emirates.

The local market and expats to the rescue

Tourists aside, retailers interviewed for this article say the biggest percentage of their clients were the Lebanese expats who came for summer vacation and the general Lebanese population. “We have always relied on our local Lebanese clients as the source of our continuing success; the Lebanese diaspora is a contributing element in our customer base as well,” says Jamil Rayess, general manager of Hamra Shopping & Trading Company (HST), which operates Grand Stores (GS) and several brand stores.

“We lost the tourists who used to shop in Lebanon and these constitute 20 percent of our sales, but this drop was between 2010 and 2011. Since then we have adapted to focus only on the local market and the Lebanese,” says Traboulsi. He goes on to explain that Lebanese expats generally have more disposable income due to the salaries they make abroad, which they often spend on shopping when they visit home.

The attack of the malls

Malls are highly popular among local Lebanese customers, and it is no surprise that all the retailers Executive spoke to have outlets in these large shopping centers.

Traboulsi says their Hugo Boss store in ABC Dbayeh – their first directly owned store in Lebanon which they took over from their franchise partner two years ago – is their number three performing store in the region in terms of turnover per square meter following their two outlets in Dubai Mall and Mall of the Emirates, Dubai, respectively. Atamian says their outlet in ABC Ashrafieh is their strongest point of sale for the high end market in Lebanon.

Atamian explains that the trend of malls started seven to eight years ago and has been on the rise ever since. “It seems that more and more people enjoy shopping experiences in the mall, where it is never hot or cold and you find entertainment for the kids and everything in one place,” he says. 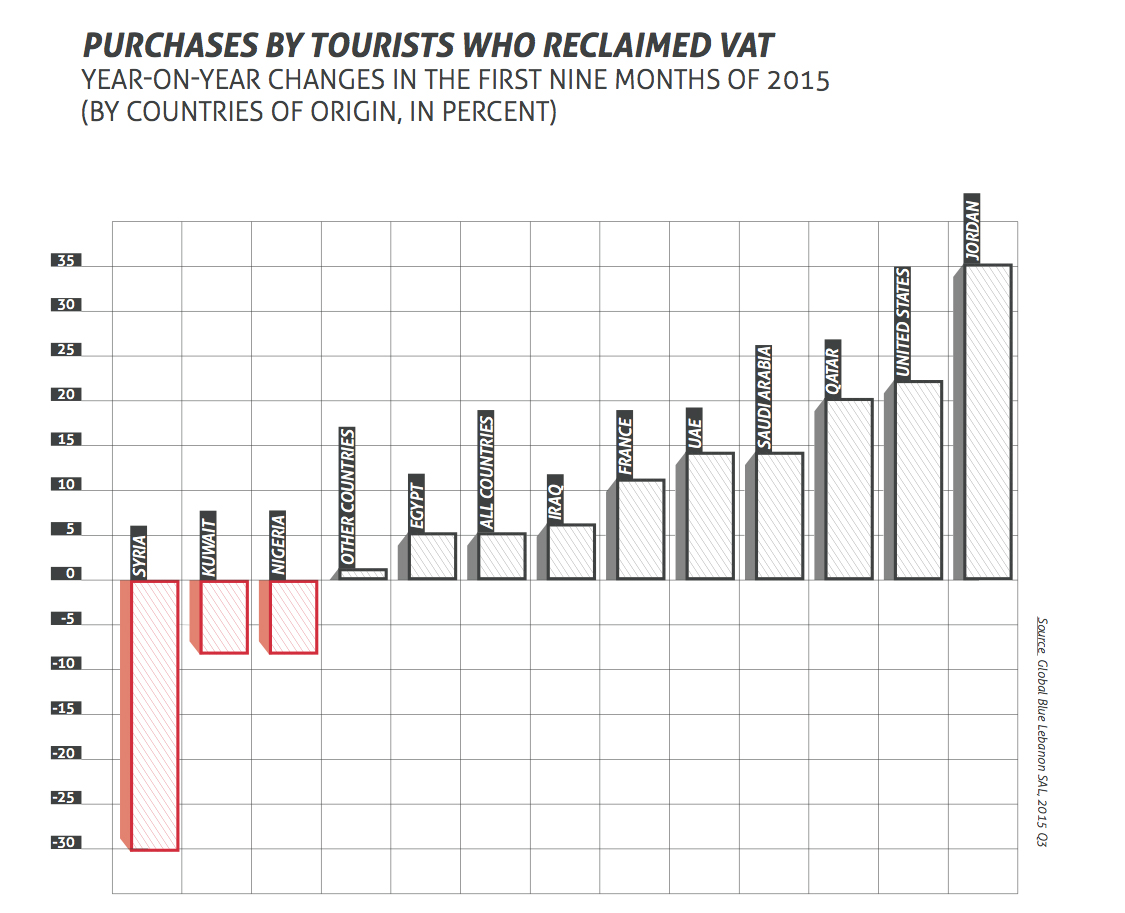 Traboulsi sees this mix of medium and high end brands that exist in malls as a plus point for retailers like himself. “The trend of malls came to Lebanon and we should not underestimate their footfall. The mall has medium to high end brands, so the footfall gets created in the medium and extends to the luxury,” he explains, noting that people tend to buy low end luxury products, such as accessories, in a mall more than elsewhere.

While the prevalence of malls has taken its toll on the more traditional retail areas such as shopping streets in Hamra or Ashrafieh, these conventional shops continue to survive. “Of course with the diversity existing in malls, their appeal is on the rise; nevertheless, some shopping streets have kept their status as [key retail] destinations and have flourished in parallel with the development of the ‘mall culture’,” says Rayess.

Atamian sees that those streets now appeal to a different nature of shoppers. “It doesn’t mean that the streets of Hamra or Zalka will die but the purchasing power of people who are going there dropped,” he explains, giving the example of the fact that international brand names in general are opening in malls rather than at street level.

The retailers that Executive spoke to are adamant that downtown Beirut as a shopping area is guaranteed to live on, despite their current struggles there, due to its concentration of high end and luxury brands. The overall business there, however, is still experiencing serious fluctuations in footfall and revenue.

Atamian says their luxury brand watches saw a drop of 15 percent in sales year-on-year when compared to 2014, and blames this on the global economic crisis and on scarce business in downtown Beirut.

“One of the major reasons [for that] would be because the downtown area, where all the luxury brands are centralized, saw a lot of closures and protests starting July [2015], which is our high season.” Atamian adds that the garbage crisis also caused the Lebanese expats in the country to cut their trips short.

Hugo Boss, which has seen a 12 percent growth from 2014, says the only hit they took in retail in Lebanon was in the downtown area, following the closures and protests. “The problem with Downtown is the footfall, although Lebanese generally love to go to Downtown. The area could have more footfall if they just leave it alone for a while and ensure it’s a safe place for Lebanese to come with no difficulty of access,” says Traboulsi. Such a statement may come across as somewhat hopeful, however, considering much of Downtown has been relatively empty in comparison to other commercial areas in recent years.

In fact, Atamian notes that even before August 2015, Downtown had not been performing as well as usual because of the decrease in tourists. Tourists indeed constituted the main clients in the downtown area, and with their decrease and the many empty shops they left in their wake, one wonders whether businesses there should start adopting the strategy of targeting the local population.

However, a sign of retailers’ continuing faith in Downtown’s bounce back is their mentioning of new outlets opening in the area. Atamian plans to unveil a Baume & Mercier boutique in Downtown by December 2015; Traboulsi plans on opening a Hugo Boss flagship store on Allenby Street by March 2016; and HST has spoken of a 2,000 sqm GS flagship store to be launched in 2016.

A look back and a look ahead

Their luxury brands aside, Atamian says they were “quite successful” in maintaining their sales across their brands through their reliance on mid-market priced and fashion brand watches, which performed well in 2015.

According to Atamian, 2016 will be similar to 2015. “We do not foresee any major change up or down, and if we can continue to maintain our performance, then it’s okay for us,” he says.

Traboulsi says the process of shifting Boss’s business model from franchise to direct contact sales will be completed by 2016 and is meant to better control the brand and offer clients a “more premium” experience.

Traboulsi maintains a positive outlook, which he says is necessary for operating and growing in Lebanon. He advises retailers not to be discouraged by occasional poor sales and not to react by cutting down on qualified staff or product offerings, since that could cause loyal clients to shop elsewhere.

While the business climate remains generally tense for Lebanon’s retailers, it is a positive sign that they are still investing and expanding in the country, albeit conservatively, keeping faith that when the country bounces back, so will the profits.

The economies of cultural wealth