Daft Punk is our inspiration.” It’s one of the first things Nicolas Moussallem says to me, as we settle ourselves in the weak March sunshine at a table in The Gathering’s cobbled courtyard, just below his tiny office. The interview hasn’t officially started yet, but I’m intrigued. Moussallem isn’t a musician, he’s a furniture designer, a rising star on the Lebanese and international scene, along with his business partner David Raffoul. 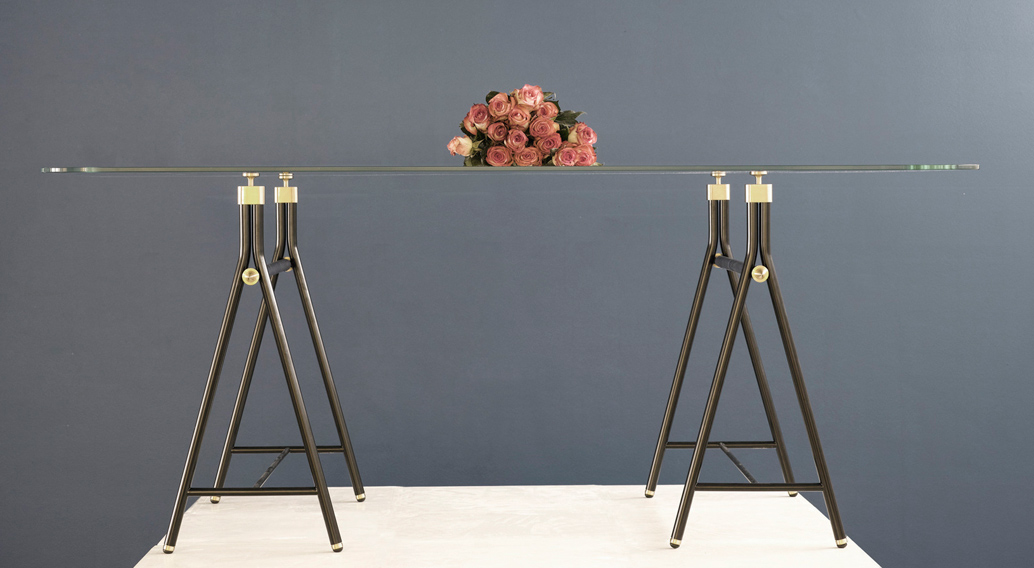 So how can an electronic music duo inspire a table or a sofa? “We want our work to be like the design form of their music,” Moussallem explains. “My dream would be to design their next helmets.”

When Raffoul joins us, we talk a little bit about the duo’s education and background, and then Raffoul tells me, “We’re really inspired by Daft Punk. We’d love to design their helmets one day.”

David/nicolas, the design studio that Moussallem and Raffoul founded together in 2011, specializes in creating timeless pieces — luxurious, finely balanced works that blend retro elements with a distinctly avant-garde approach. They designate their style as “retro-futuristic,” a result of carefully juggling different design styles and periods to create a work that stands outside the box. 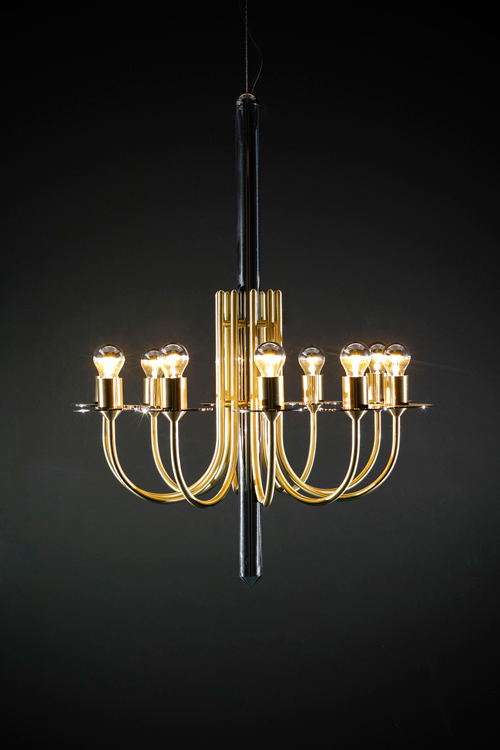 “We’re following our gut,” explains Moussallem, “in how we believe it’s possible to have a piece that is not possible to date. Like, if you look at any piece we do, you don’t know if it was done today, 20 years ago, 10 years ago or 20 years later. We don’t mix design periods, because that’s not really interesting, but we mix feelings.”

Having studied interior architecture together at the Lebanese University of Fine Arts, Moussallem and Raffoul went on to do Master’s degrees at the Scuola Politecnica di Design in Milan, before doing separate internships in Italy, Lebanon and Japan.

In 2013, the pair were offered a chance to spend three months working at Vista Alegre, a porcelain manufacturer near the Portuguese coast. They were housed in the village abutting the 200 year old factory, today all but abandoned.

“No one lived in the village except us,” recalls Raffoul. “It’s kind of a spooky village. You have broken glass, broken houses and just one light, so it’s kind of freaky.”

While they were there, Daft Punk released their fourth album, “Random Access Memories,” which inspired Moussallem and Raffoul’s project “Digital Love,” named after one of the songs. “Before listening to Daft Punk, we were already working on it,” explains Moussallem, “but we started to look at the old albums of Daft Punk. You don’t feel this retro-futuristic feeling, but the last album was really into that, and this is why it was really interesting for us. It kind of spoke to us, helped us go a bit deeper.”

For “Digital Love,” Moussallem and Raffoul experimented with ceramics, using the factory’s segundas — porcelain pieces with a tiny flaw, such as a small bubble or discoloration that doesn’t pass the pre-sale inspection. Taking these finished but useless porcelain plates, salt shakers and bowls, they assembled them into striking compositions and placed them back into the kiln, where the glaze melted and then re-hardened, sticking the objects together. 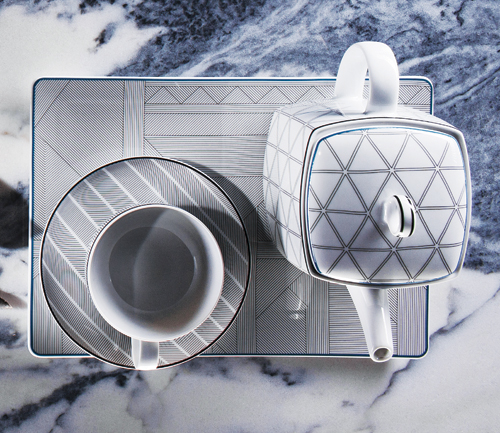 These sculptures were then adorned with a funky gold or platinum glaze and fired again, creating a limited edition of 30 pieces that contrast hard points with soft curves, symmetrical forms with irregular embellishment, pure functional white with high grade, shiny metal. The project was complemented by ‘Orquestra,’ a series of designs approved and mass produced by the factory, based on the harmony and rhythm of straight lines creating abstract patterns on rounded forms. The designs in ‘Orchestra’ can be seen as simplified versions of Islamic art, hinting at the designers’ Lebanese origins.

Though the majority of the projects david/nicolas work on don’t appear to have ties to the Middle East, the duo say their Lebanese background has influenced their approach. “People say our work doesn’t have an Arab identity,” says Raffoul, “but we think it does. The Middle East is all about mixing, and we mix a lot of materials.”

The Lebanese habit of mixing and matching styles was the subject of the designers’ solo show at Art Factum Gallery in January this year. Entitled ‘Loulou/Hoda’ after Moussallem and Raffoul’s grandmothers, it aimed to take the traditional pieces found in a standard Lebanese home and update them to fit a contemporary interior, mixing brass, glass and leather in david/nicolas’ timeless aesthetic. 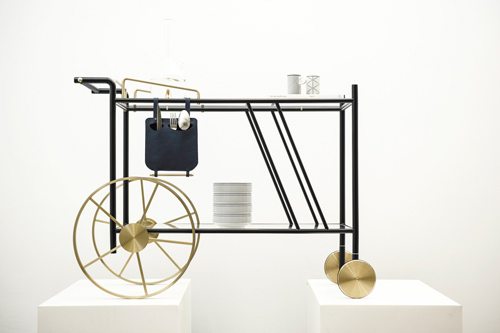 “In the exhibition, we say that there is no such thing as Lebanese design,” says Moussallem. “That’s why we came up with the show, because if you talk to my grandma, or his grandma, [they say] ‘This chair was made in London. This table was made in Italy. This is a French chandelier.’ So honestly, the only thing that makes them Lebanese is how they are all placed together.”

The sleek, brass-tipped pieces in ‘Loulou/Hoda’ recall their ‘Dualita,’ another one of their series exhibited at the prestigious Nilufar design gallery in Milan in 2014. Adapting their work to the gallery’s tastes, the pair produced a more classical set of pieces that combines frames made of minimalist metal tubes, finished with satinated copper, and rich, colorful upholstery in Alcantara textiles. 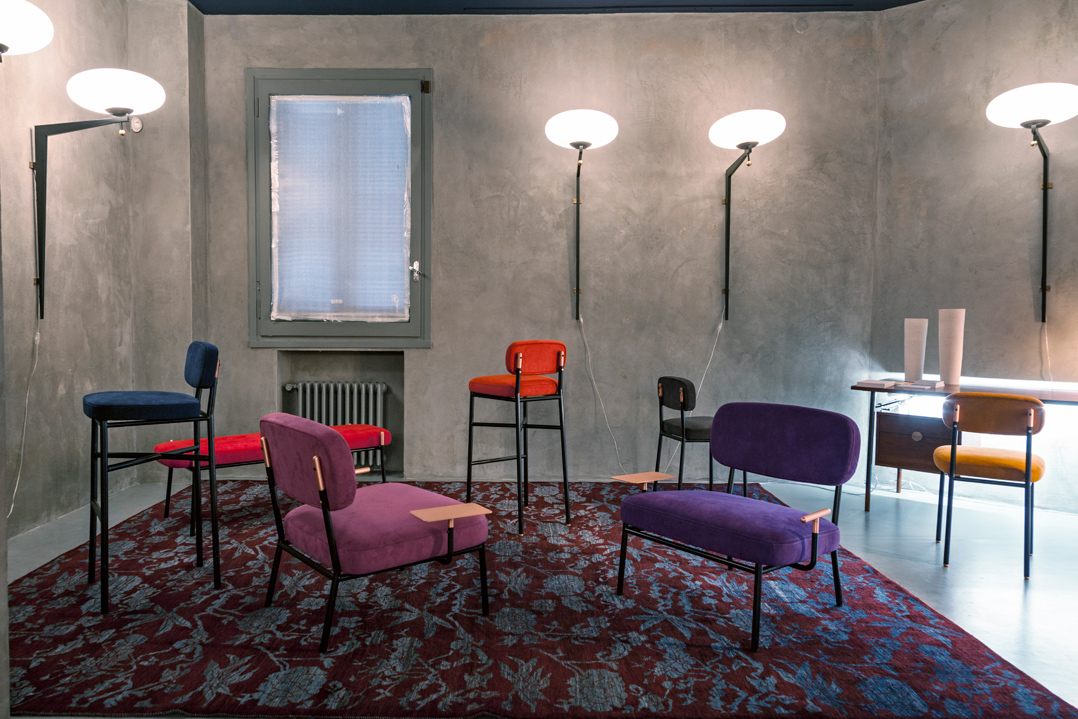 “Dualita is all about duality, so it’s about past and future, it’s about soft and hard,” explains Raffoul. “It’s all about equilibrium and contrast, this is how the collection was developed.”

The pair are accustomed to adapting their vision to that of a client — in fact they never create a piece that isn’t specifically requested.

“At the end of the day, design is not art,” says Moussallem. “When you design something you design it for someone and for a purpose. If you don’t know who you’re designing for, how can you design? This is why we don’t create pieces that are not asked for. Our objects are kind of a synthesis of a conversation between first, the client and us, and then between David and me.” 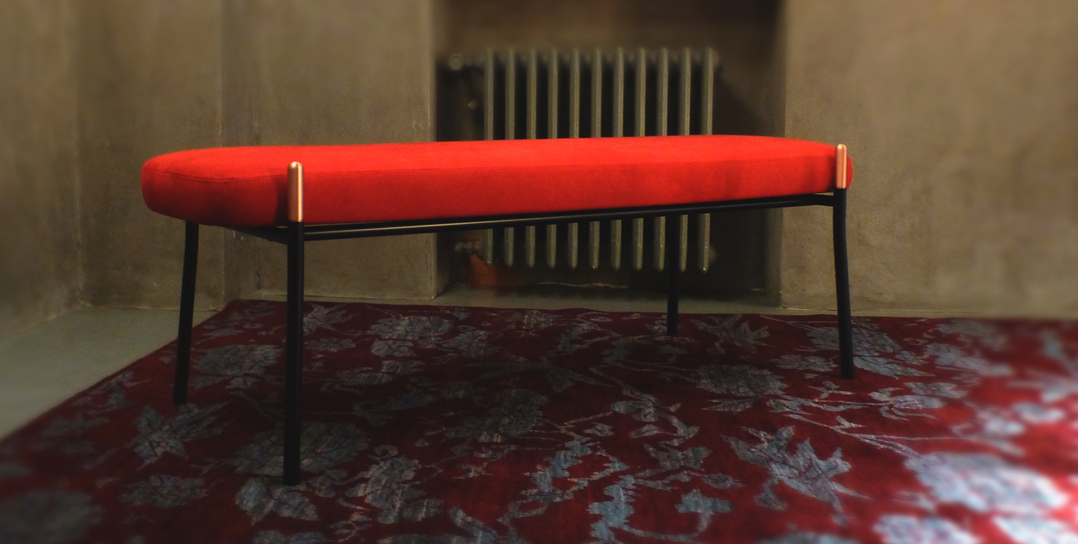 Their inventiveness is apparent in ‘Alter Ego,’ a piece created for Lebanese design platform House of Today’s exhibition on the theme “Naked: Beyond the Social Mask.” David/nicolas created a person-sized suit stand that holds everything from jacket, trousers and tie to watch, wallet and loose change. 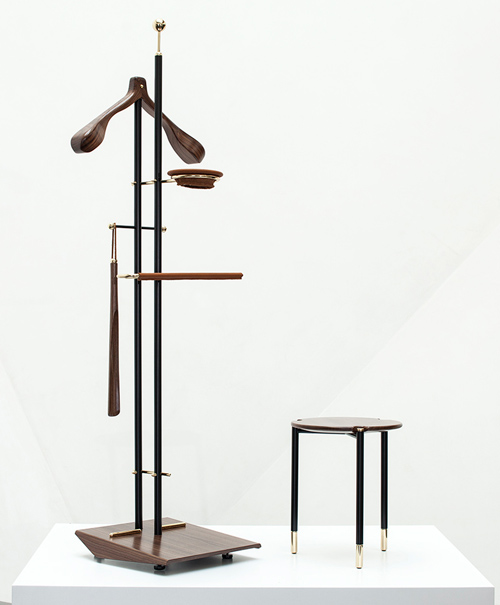 “Your alter ego is what you’d wish to be. In this case, it’s someone who’s in finance, like a nice businessman and it’s kind of the last performance of the day,” says Moussallem. “You’re stripping off your clothes slowly, and then you’re dressing the valet and you’re actually getting naked yourself. So the valet becomes your social mask, the way others see you.”

Currently working on a second series of pieces for Nilufar, Moussallem and Raffoul are clearly passionate about what they do. Part of a growing set of young Lebanese designers taking things in a new direction while maintaining links to their heritage, they promise interesting things to come — whether or not that includes designing Daft Punk’s next set of headgear.