Although 2015 was a trying year for the Lebanese economy and tested many economic players beyond what they experienced in the already challenging year of 2014, the results of Lebanese banks were remarkably stable. It is notable that the consolidated market shares of alpha and beta banks maintained high concentration on the domestic side. Their domestic assets increased by 13.2 trillion Lebanese lira, accounting for over 95 percent of the growth in total assets.

The same is true for domestic deposits, which edged up 5.1 percent to over $151 billion, with the highest growth in percentage terms in lira-denominated deposits at 7.1 percent, down only 30 basis points when compared with 2014. Growth rates in foreign deposits, due to foreign currency developments, were down a multiple versus 2014, namely at 1.7 percent from 22.8 percent in 2014. This was reflected in the aggregate figures where the share of domestic deposits of overall alpha and beta deposits moved up by 50 basis points, in opposition of trends seen in previous years.

Lebanese banks in the two main size segments by deposits, the alpha banks with more than $2 billion and the beta banks with $500 million to $2 billion, account for over 95 percent of the sector. Bankdata, the consulting and analysis company covering the Lebanese financial sector, has consolidated the results of alpha and beta banks (14 alpha and 12 beta) for the past two years, illuminating their performance in a new and sharper light.

Overseas operations of alpha banks were stronger than those of beta banks as only two beta banks are active in markets outside of Lebanon. But the consolidated results reveal that alpha and beta groups together reached stable portions of approximately 82 percent of assets and deposits, 72 percent of loans and 82 percent of their profits in the domestic Lebanese market.

The profit growth rate of alpha and beta banks in 2015 was 7.5 percent, down 2.4 percentage points from the 9.9 percent growth achieved the year before. However, the growth rates of profits remained strong when compared with all other aggregates; growth in assets, deposits and loans were halved from the growth rates seen in 2014.

Of the total workforce of alpha and beta banks, 24,000 or about 70 percent, are active in the domestic market, compared with 10,000 employed overseas. Domestic recruitment was increased versus 2014. The concentration of bank branches is still in a wide range of less than 20 branches per 100,000 residents in outlying provinces to more than 80 branches per 100,000 persons in the Greater Beirut conurbation.

The overall bankerization rate of the Lebanese population is estimated by Bankdata to have reached above 70 percent. In terms of the outlook for network developments, we believe that there are still unused potentials for domestic rollouts, especially using advanced, diversified and innovative methods.

In review of the ratios reported by alpha and beta banks, liquidity is maintained at a high level in both the Lebanese currency and foreign currencies, mainly US dollar. Total net primary liquidity over deposits stood at 31.03 percent at end 2015, compared with 32.38 percent at end 2014. Portfolio securities over deposits increased to 40.97 percent. Collective provisions over net loans and operating expenses over average assets remained in the same ranges as 2014, registering 1.11 percent and 1.41 percent respectively.

Bankdata notes that the stability of performance ratios and asset quality ratios is remarkable, given the overall market conditions and disruptive developments seen in 2015, and provide proof that Lebanese banks are resilient, run by bankers who are experts at what they do. 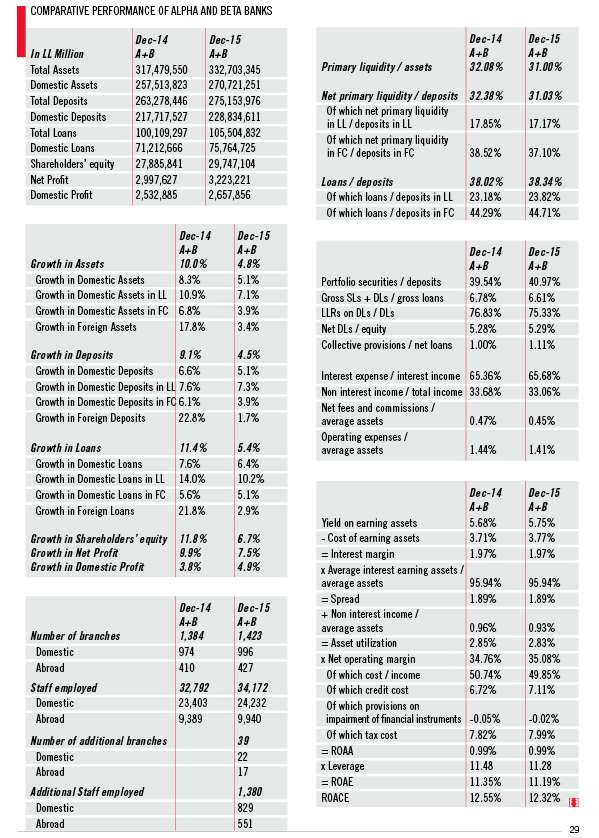 In conversation with Freddie Baz of Bank Audi