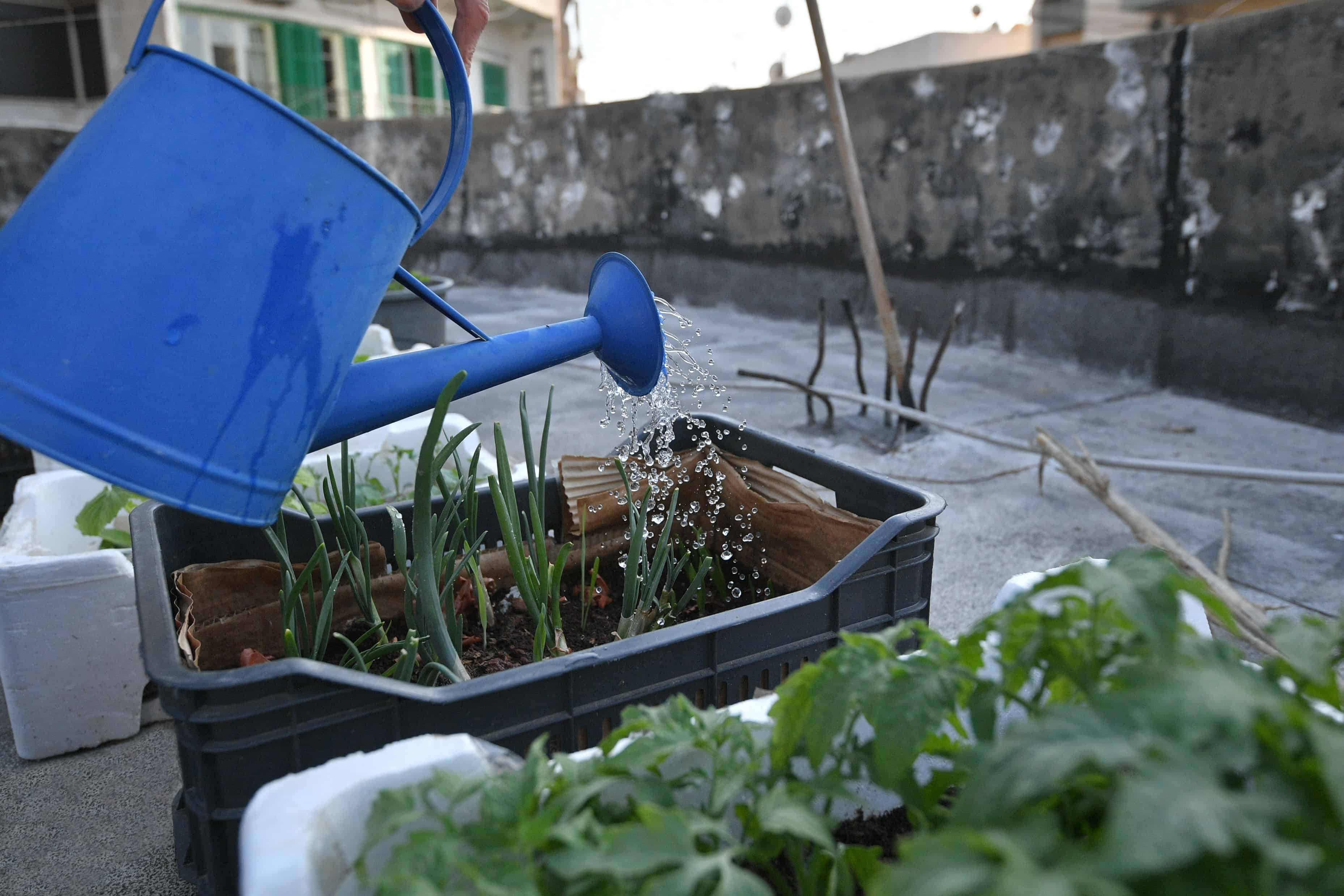 As prices of both imported and locally produced food items continue to increase and Lebanon’s food security is potentially threatened (see articles on agro-industry and food security), the old Lebanese proverb “fellah mekfi, sultan mikhfi”—which roughly translates to “a satisfied farmer is really a sultan”—rings true. Knowing how and being able to grow one’s own consumption needs of fruits and vegetables, is a wealth in these economically challenging times we are passing through.

This awareness of the significance of a productive sector like agriculture was close to zero prior to 2019. Ramy Boujawdeh, deputy general manager at Berytech—an ecosystem that fosters innovation technology and entrepreneurship, initiated in 2002 by Université Saint-Joseph, recalls (in an earlier interview with Executive) that when they launched the first edition of accelerator program Agrytech in 2017, they struggled to attract participants. After a lot of efforts to drum up interest in agriculture, targeted mainly toward universities, this was slowly beginning to change and their third accelerator round—launched on October 16, 2019—attracted 110 participants (up from 65 in the first batch).

As indicators of bleak days to come over Lebanon showed their first buds toward the end of 2019, this emerging interest in agriculture was heightened as more Lebanese felt the need to be food independent (being able to provide food for one’s self and community). This interest was manifested at individual and community levels, with more people showing interest in growing their own food. Kon, a neighborhood growing initiative in Furn el-Chebbak that was developed in early 2020, is one example of community efforts revolving around agriculture.

Also born out of this awareness of the value of producing one’s food were volunteer-based movements or initiatives aimed at supporting those interested in becoming more food independent. The popularity of these movements can be viewed as an indicator of the growing interest in agriculture. A Facebook group called Izraa, developed by agricultural engineers to answer all agriculture-related questions (whether urban or rural, high or low tech) and to share expertise through tutorials, exceeded its admin’s expectations by reaching 1,000 members barely two days after it was launched in mid-January 2020, according to Salim Zwein, one of Izraa’s founders. The group has 14,500 members at time of writing, an increase of 2,200 from the same time last week, and receives an average of 15 questions per day, per this writer’s observation.

Similarly, a talk on food sovereignty that was held in Tripoli’s Nour Square early in December 2019 took three hours instead of the planned hour and a half due to the high level of engagement, with a larger than expected 150 attendees. The talk was organized by Haraket Habaq, a movement which was also founded in December by a group of youth who live in Tripoli and which promotes sustainable development through agriculture and local production. Mourad Ayyash, one of its founders, tells Executive, “We saw the need for us to organize this momentum that had developed around the importance of agriculture and food sovereignty so, we went across Lebanon (Hemmanah, Majdal Anjar, Saida, Sour, Akkar, Tripoli, Beirut, and the Bekaa) engaging with whoever was interested in this subject. From these talks, other initiatives were born.”

There is also increased interest in agriculture from private sector individuals, according to Shady Hamadeh, director of the Environment and Sustainable Development Unit (ESDU) at the American University of Beirut’s Faculty of Agricultural and Food Sciences. “Many are expressing interest in investments in agriculture,” Hamadeh says. “So we would like to take this opportunity, through Ardi Ardak [NB: a national food security initiative launched in December 2019 as a collaboration between ESDU, the Lebanese League for Women in Business (LLWB), the Food Heritage Foundation and Zico House] to link these investors and big land owners with small farmers and rural women. Rural women are at the center of Ardi Ardak.”

The face of the modern day farmer

Those interested in individual and community planting nowadays span a wide range of people in Lebanon. “We have professional farmers who ask us a question related to crop disease and also individuals asking us how to best care for their gardenia or what vegetables to plant next to their olive trees, so we cater to everyone,” says Izraa’s Zwein.

Although the interest in agriculture and being food independent was born out of Lebanon’s economic crisis—proof being that a big percentage of the initiatives promoting agriculture were developed by the end of 2019—the COVID-19 crisis gave people enough time on their hands to do something about it. Izraa receives daily comments from members who had no prior background in agriculture but say they have developed a passion for planting after having first tried their hand at it during the lockdown, according to Zwein. Although he cannot yet quantify it, he also says that based on interaction within the group since the start of the lockdown there has been an increase in both high-quality rooftop garden installations, complete with raised beds, and in youth returning to rural areas and planting in the neglected land of their grandparents.

Asmahan Zein, president of LLWB, also believes that the coronavirus crisis has made people with no background in agriculture realize its value as a productive sector. “People are looking toward alternative productive industries that would help them survive and they no longer assume that everything will arrive to them while they are at their office in Beirut,” Zein says, explaining that this thinking has allowed her to gather several organizations they work with around Ardi Ardak.

Because the quarantine measures limit gatherings, growing efforts are more at the individual level rather than the community level nowadays. Souad Abdallah, founder of Kon, says that some neighbors have expressed their interest in the initiative but have shied away from actively participating because of the restrictions; she expects this to change once the lockdown is lifted. For now, there are four active participants in the rooftop garden of her building and they communicate online with representatives of another rooftop garden two minutes away from her and three balcony planting projects, also in the area.

The ABCs of planting

The beauty of planting is that anyone interested can find a surface to grow something in. When it comes to food, herbs are ideal for those planting on small balconies, says Zwein, while potatoes and tomatoes are more suitable for rooftop gardens and those with access to land can plant wheat alongside a variety of fruits and vegetables, depending on the land’s specifications.

Abdallah says they have assigned different produce for the participating neighbors depending on the specifications of their planting area: One neighbor grows lettuce for the community because his garden gets a lot of shade and that is favorable for lettuce, for example.

The initiatives Executive spoke to all promote sustainable agriculture, which Hamadeh explains as environmentally friendly agriculture that is resources efficient, or permaculture, defined as “an agricultural system or method that seeks to integrate human activity with natural surroundings so as to create highly efficient self-sustaining ecosystems.”

This type of agriculture does not use chemical fertilizers or pesticides, which has the benefit of driving down gardening costs. The latter two, according to Zwein, are the highest costs for farmers, especially nowadays when the price of chemical fertilizer has gone up because of the foreign exchange rate. Instead, permaculture uses organic fertilizer or compost instead. This can either be homegrown—Abdallah says Kon makes its own compost out of egg shells, coffee grinds, and organic material such as fruit peels—or bought from local producers. In this case, the cost of compost for a 200-square meter rooftop garden would be an average of LL50,000, Zwein says, speaking out of personal experience.

Abdallah says permaculture uses less soil than conventional planting, explaining that in Kon they use layers of dead matter (dead leaves), green matter (grass), horse manure, and soil to plant the seeds in. “This decreases the weight on the roof and the usage of soil and creates a healthy environment for plants,” she explains. Other ways Kon is decreasing costs is by using donated recyclable items for planters and pots, and relying on exchange of services to get some gardening tasks done (neighbors help her plant in exchange for seeds or seedlings, for example).

Zwein estimates that a 6 meter by 3 meter raised bed (for rooftop gardening), with a depth of 60 centimeters, would need a maximum investment of LL1 million when using the best soil (a mix of 80 percent peat moss and 20 percent compost). Those who already have arable land would have an understandably smaller investment, since the soil is already there.

There are many reasons why Lebanese are more inclined to spend more time with a shovel and soil these days. A main driver for promoting agriculture among the movements and initiatives Executive interviewed is to promote food independence. “Food sovereignty among urban dwellers is a main goal for Kon because we are passing through an economic crisis when it is very easy to produce our own food and also very healthy since we know we are putting into the soils,” Abdallah says.

Ayyash also speaks of the importance of food sovereignty and people’s right to nutritious food. He adds that providing refugees with employment opportunities is another goal for Harkat Habaq, since Lebanese labor law restricts the fields which they can work in. He gives an example of a project in Tripoli that Haraket Habaq is collaborating on with another organization called Hajjar w Bashar (Stones and People) where the municipality donated a 13,000 meter square garden to be planted by the two organizations—produce from the land will be distributed by them to vulnerable communities.

Aside from being able to feed one’s self and community, planting in rooftop gardens and small plots of land, if done at a very large scale, could conceivably free up Lebanon’s already limited agricultural land. “When people can feed themselves from these ways, it will decrease the pressure on the land used for vegetables nowadays and so it can be used for more interesting projects such as growing wheat or animal feed, for example,” Zwein says.

One of the main goals of Ardi Ardak, according to its concept document, is to “promote food security at the rural producers’ level by promoting small scale producers’ access to markets; and urban consumers level by providing them access to healthy local produce.”

For Abdallah, community growing in urban areas has the added benefit of improving air quality, an element which she feels is very important in Beirut, where air pollution exceeds World Health Organization recommendations over threefold. Abdallah also says that neighborhood planting initiatives such as Kon nurture a sense of community among neighbors and she hopes to see this initiative eventually replicated across many of Beirut’s communities. “It shows that people can work together on a common interest without having a political umbrella or identity,” she says.

Whether this individual and community growing trend is a temporary fix to lockdown and economic hardships or whether it will remain in the long term remains to be seen.  What is clear, for now, is that people have realized that they can no longer take for granted their access to food, and that the effects of the economic and coronavirus crises has had and will continue to have impacts.

CORRECTION: This article was updated on 08/05/2020 to reflect that the talk held in Tripoli’s Nour Square was organized by Haraket Habaq, not the Socio Economic Action Collective (SEAC). During our initial interview, Executive was informed that the talk was organized by SEAC, and that Haraket Habaq was a media offshoot of the organization. We have since been contacted by Haraket and asked to remove this reference, as their organization is independent.