Balthus never wanted walk-ins, seeking to be a destination in itself (Greg Demarque | Executive)

It seems Lebanese restaurateurs will be forever enamored with downtown Beirut, despite the roller coaster ride the area has put them through. It all started in the 1950s when the Burj area was buzzing with fashionable people and restaurants, only to be destroyed by the Civil War. Following the reconstruction of Downtown in the early 2000s, this love affair was rekindled with the cluster of restaurants in Nejmeh Square which again ultimately shut down. Restaurant operators continued to move from one street to another in Downtown, including Uruguay Street and Zaitunay Bay, with the latest restaurants to hit the area of Minet El Hosn, next to Starco’s lower entrance and in between Phoenicia and Beirut Souks.

That location, which had been languishing with little footfall or activity, now welcomes swanky Lebanese who like to see and be seen in any one of these restaurant’s terraces or through their wide glass walls.

The first restaurant to open its doors in Minet El Hosn was Anthony Nahas’s Balthus, which welcomed its first guests in 2001. Frida Nahas, Anthony’s mother and the restaurant’s co-manager, recalls that she discouraged her son from opening in this location, pointing out the almost total lack of pedestrian footfall or even neighboring businesses at the time. Anthony’s reply was, she recounts, that he didn’t want a restaurant that attracted walk-ins and instead sought an establishment that would be a destination in itself for clients who had drivers and cars.

While Nahas’ vision was realized through Balthus’ top notch clientele, Minet El Hosn as a food and beverage (F&B) destination did not really pick up until 2010 when L’Avenue Du Parc, a French restaurant, and the Japanese cuisine restaurant Kampai opened.

According to Henry Farah, CEO of Kampcatering (which manages Kampai, the Italian restaurant Gavi and seafood restaurant Blue Port in Zaitunay Bay), the company’s partners found Minet El Hosn interesting due to the growing number of banks and high-end office buildings, some of which were developed by the individual partners themselves, such as the Palladium Building which houses Kampai, Gavi and Cocteau.

Some of the individual partners of Kampcatering are also stakeholders in other restaurants in the area such as Cocteau and L’Avenue Du Parc. “Many of the buildings in the premises belong to them so they introduced these restaurants to the area and in this way brought footfall here. This is how it grew as a destination,” elaborates Farah. 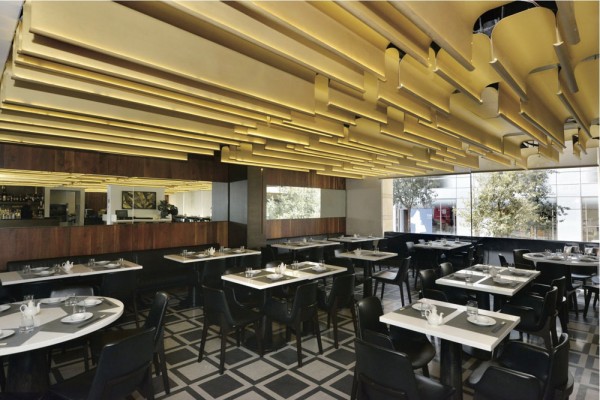 The power of economics of proximity

In true economics of proximity fashion, the success of these three restaurants (Kampai, L’Avenue Du Parc and Balthus) encouraged further similar investments in the area. The current total of restaurants in Minet El Hosn is nine, with three more under development, including Em Sherif, a Lebanese restaurant, and a project by the Boubess Group, which will be the group’s third investment in the area.

Ramzi Adada, general manager of Yabani, a Japanese restaurant which had been in operation in Monot since 2001 before its relocation to Minet El Hosn a year and a half ago, predicts further growth for the area, arguing that it has the right criteria for an upscale dining destination such as wide and generally not busy roads, ease of parking right in front of the venue and the presence of high end office buildings and residential units.

The merits of competition

Speaking for La Petite Maison, which relocated to the M1 Building facing Kampai late this February, General Manager Yannick Chaloyard says the presence of similar upscale restaurants was one of the factors behind their choice of location. “We are surrounded by all those restaurants and this creates a buzz. Downtown has become a foodie destination because you have a lot of different styles [to choose from], from Italian to Asian to French to a steak house. This way, people will think of Downtown when it comes to good food, as opposed to seeing it as only for business or shopping,” Chaloyard explains. 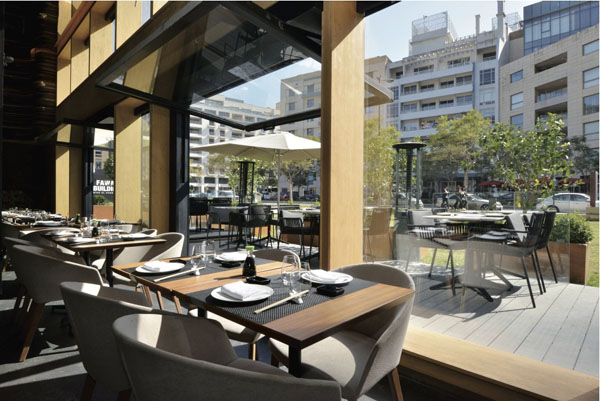 What’s in the rent?

Rent prices in Downtown are known to be high. Farah says rental prices in Minet El Hosn are between $70 to $100 per square meter annually, which brings total rental cost to around $300,000 per year minus common building expenses and taxes, a figure which Nahas confirms.

As Adada explains, the high rents almost necessitate that restaurants in the area be on the expensive side. “It is an upscale area with upscale real estate in the form of residential and commercial buildings and thus higher rent for all these restaurants. Automatically there is less of a market for lower price restaurants here.” He also argues that another reason this area would be of little interest to individual snack shops or diners is that such concepts prefer to be in a busy, high traffic area, which is not the case for Minet El Hosn.

Indeed, the average bill at these establishments ranges from $54 to $100 per person without drinks. In some cases, money seems to be of no consideration to patrons, with Nahas insisting her clients appreciate the quality of the food and service at Balthus and don’t mind forking out for the admittedly high bill. “I’ve been running this place for 15 years: I feel it’s my home, not a restaurant, and this is how I run it. My clients may be few but I know them all; they come here for a good meal and exceptional service,” she says.

Other restaurant managers, such as Adada or Farah, believe their pricing is reasonable when the quality of food and location are taken into consideration and compared to other sushi restaurants of their caliber. “We define it as an upscale casual restaurant; upscale in terms of quality of food, service and location. But if you compare it to other similar sushi restaurants in Lebanon, we are reasonably priced. Although there is a perception in Lebanon that all restaurants in Solidere are overly priced, it is not necessarily the case,” argues Farah.

During lunch hour, restaurants in Minet El Hosn whom Executive spoke to say that their venues attract mainly business people from the neighboring office buildings, as well as socialites who are attracted by the glamour of the area.

With the exception of Balthus, where Nahas says that lunch is their most patroned time, the restaurants in the neighborhood say they get more footfall at night, mostly in the form of couples and groups of friends. “All the restaurants in the area are twice as busy at night than during the day, since more people go out for dinner,” says Adada.

Farah also says their restaurants are busier at night, explaining that while the lunchtime crowd is mainly generated by the neighboring businesses and divided among the restaurants in the area, the evening pool of customers is larger, with people coming from across Beirut to dine in Minet El Hosn.

Although some restaurants in Minet El Hosn are busy seven days a week, others cite the weekend as their busiest time, just as it is for most of Lebanon’s restaurants. Adada says that Yabani sees a lot of families during weekend lunches and early evenings, while Nahas says Balthus is less busy on weekends as her clientele tend to be out of Beirut.

The general consensus among those interviewed is that the restaurants in the area tend to attract customers aged 30 and above. Comparing it to the crowd that was frequenting Downtown’s upscale establishments when they first opened Kampai, Farah says: “We are able to attract a different type of clientele than the older luxury dining crowd that Solidere used to attract; we attract a relatively younger age group.” 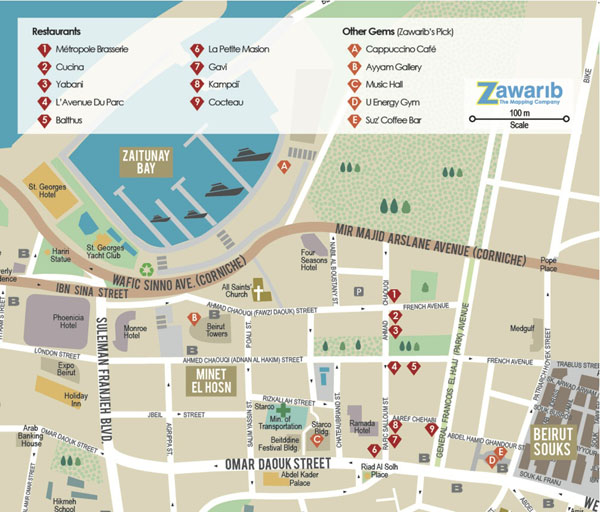 As with any F&B destination, there are challenges facing Minet El Hosn’s restaurants. “A challenge is securing clients because when the rents are so high and you have such a high annual expense, you need a lot of volume and in Lebanon we have not been witnessing as high a number of tourists. We are relying on local clientele,” says Farah.

Nahas also stresses the importance of tourism to sustaining volume and keeping all the restaurants in the area busy. “Give us peace and tourists and we don’t need anything else,” she says.

Despite these obstacles, it seems that Lebanon’s crème de la crème have decided that Minet El Hosn is the “it” location for upscale dining at the moment. This could spell a bright future for the area or it could go the way of other once popular dining streets in Downtown. Only time will tell…

On the road to Oz

The business team: a question of balance

Fitness on an incline