Where in Beirut would one find a decent cup of coffee, a glass of high quality French wine, a filling sandwich and an appetizing dessert all under one roof?

Though such eateries that combine different concepts can feel schizophrenic and tend to be lax in at least one aspect, Café Diem manages to pull it off, making a smooth transition from breakfast through to dinner and drinks.

Sandwiched in-between Sodeco Square and Monot, Café Diem is ideally positioned for such a day/night concept and is frequented by Ashrafieh’s society ladies for coffee or breakfast, business folk on their lunch breaks and young couples in the neighborhood who are looking for a casual yet trendy evening.

The ambiance cleverly cultivated by the décor is warm and charming, a blend between a bistro and a wine bar with a heavy dose of coziness. The crisp square white tiles used on the walls, as well as the charcuterie slicing machinery and the crepe maker on display, makes one feel they are in a cozy kitchen while the black chairs and dark hardwood flooring contrast wonderfully with the walls and evoke the feel of a French bistro. 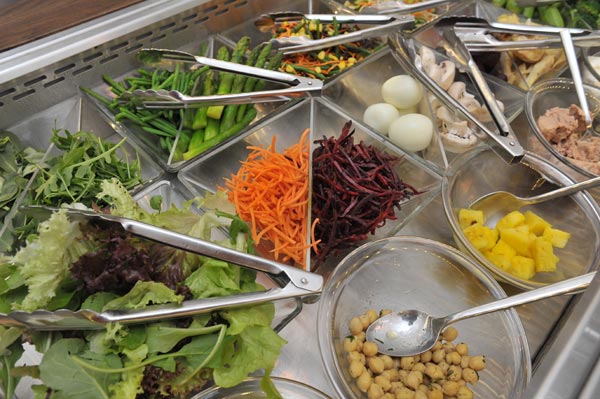 Little details such as the tea boxes and wine crates artistically scattered around and the wine bottles displayed in glass cases across from the chrome espresso maker highlight the versatile atmosphere of the space. The open kitchen theme where you can see your food and coffee being prepared and the bar running alongside it add to the relaxed and casual feel.

Café Diem is owned by Donald Battal who brought us Classic Burger and the same idea of simplicity coupled with good taste in the food menu is also found here. The offerings include an extensive breakfast menu with staples such as omelets and pancakes on offer. A scale up from Classic Burger, a business lunch (alcohol-free) for two would cost around $45.

Executive visited at lunchtime and arrived to find the place packed to the rafters. It is not a place for an intimate conversation. We were sitting so close to the next table that a moment of silence on our part ensured that we could hear every word of the conversation of the couple next to us.  But the crowd was reminiscent of the setting at a French café and did not at all deter from friendly and rapid service. 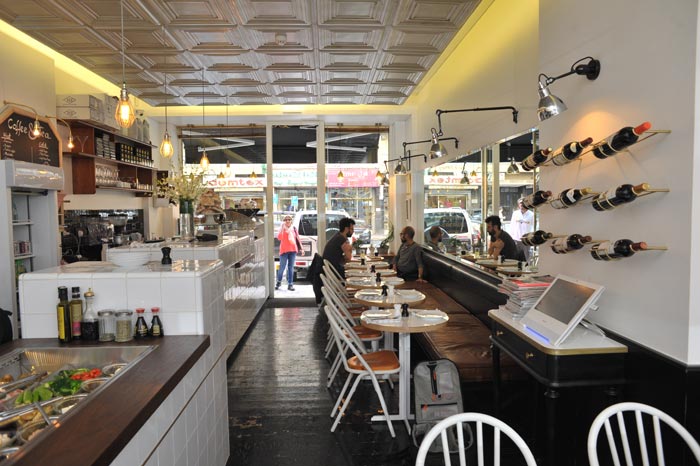 I ordered the salad bar and tomato bruschetta for appetizers. The French bread the bruschetta was served on could have been less chewy but the tomato topping had just the right amount of basil and lemon seasoning.

The salad bar is the freshest I have seen in Lebanon in that even the asparagus and artichoke included were fresh and not canned. The bar also features original and authentically Lebanese items such as pickled eggplants and labneh balls of fresh goat cheese. The dressings were creative and included alongside the typical offerings, a ginger and soya dressing as well as a Mexican inspired sauce.

For the main course we had a generous open faced chicken sandwich with a mayonnaise dressing that was surprisingly light and a grilled fish platter that was fresh tender, accented by simple olive oil garnish and sauté of fresh spinach that brought up the flavor of the fish wonderfully.

Everything was beautifully presented on dark grey stone slabs but the presentation of the espresso we ordered after lunch was a feat for the eyes of those who find beauty in simplicity. Also on a partitioned dark grey stone slab with a circular space for the dainty white cup, a light brown biscotto was diagonally laid on the remaining part of the slab and two small cubes of brown sugar were placed in parallel creating an artistic visual. The taste itself was strong, as espressos should be, and the biscotto was just sweet enough to take the edge off.

We passed Café Diem later in the evening and it was almost as packed as it was at lunchtime but this time people were sipping on red wine instead of lattes.

With Café Diem, Battal has created a winning formula which is casual enough for it not to be a passing fad yet chic enough to maintain the interest of those who are attracted to fads.