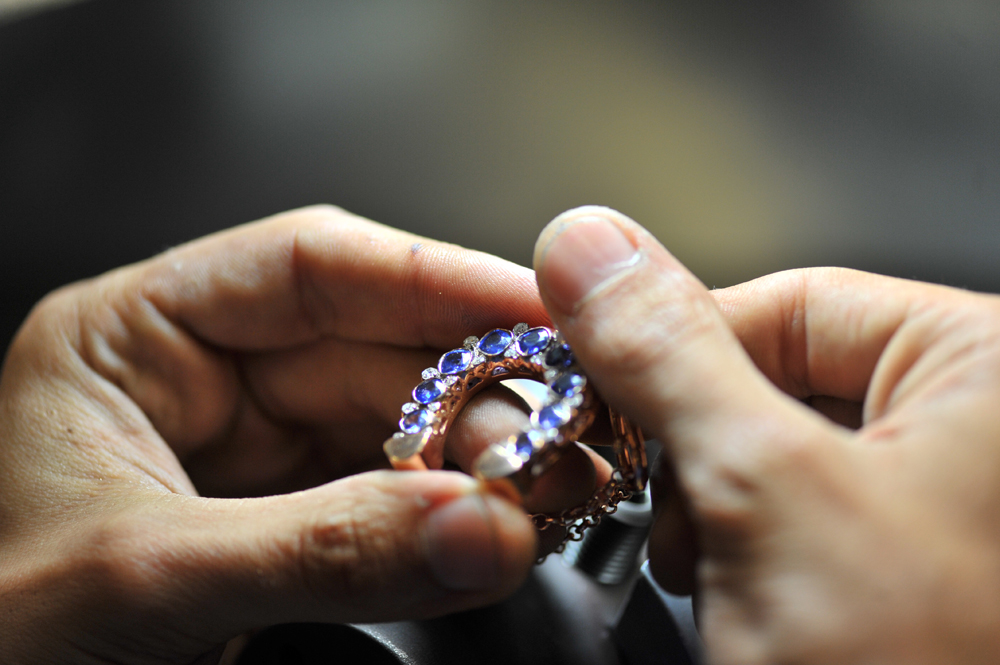 Throughout his career, Mouzannar has challenged this weakness, becoming internationally recognized for his designs, under his own name.

Mouzannar comes from a long line of well established jewelers, whose store was the cornerstone of the Jeweler’s Souk in downtown Beirut back in the 1950s. Though he grew up amid the jewelry making business and was exposed to it at an early age, Mouzannar did not intend to become a jeweler.

“I ended up doing it because I realized that I had a base in it and I know the business well,” says Mouzannar, explaining how, despite this familial background, he derives satisfaction from having created a name for himself as a jeweler in Lebanon, away from the family business.

After having studied and worked in the jewelry industry in various countries such as France, Thailand and Saudi Arabia, Mouzannar returned to Beirut 17 years ago to start his own workshop and opened his flagship store in Ashrafieh shortly after. He enjoyed success in Beirut due to his original designs which gave what Mouzannar describes as a “fun twist” to the traditional and vintage Ottoman inspired designs, which had a hint of “sadness.”

The road to international success

It was during the 2006 July war that Mouzannar decided to ensure his brand’s sustainability by expanding his business internationally. He attended his first luxury trade show in Paris. Today, Mouzannar has seven international points of sale in five cities — Kuwait, Dubai, Istanbul, New York and Paris. He says his market is almost equally divided between local and international sales. “Any luxury brand that does not have recognition in its local area cannot be exported. The company needs to have roots,” explains Mouzannar.

Mouzannar has been featured in The New York Times, and Le Figaro and counts Gwyneth Paltrow and Rihanna among his clients, with no barter or cash incentive involved.

But such success did not come without hard work, giving all elements of his company — from the creative department to the finance or marketing department and from the craftsmanship to the suppliers ­­— equal attention. “You have to work as a team and listen to the people in your company. If you don’t do so, if you don’t have all your elements in place, you will not succeed as a luxury brand,” says Mouzannar.

At his first exhibition in Paris, Mouzannar explains he had to overcome two preconceived notions that Parisian buyers had about Lebanese produced jewelry. The first was the stereotype of Lebanese people as dishonest in their business dealings and the second was the quality of the jewelry and its originality.

“I had a double battle there, but I was very patient and went to many exhibitions to learn what people like,” he explains.

While Mouzannar admits that there is good jewelry craftsmanship in Lebanon, he believes most work falls short from being called luxury. He does not blame the country’s artisans’ skills for this. Indeed, he explains that producing high quality jewelry is time consuming and therefore an investment not many jewelers are willing to make for economic reasons. This in turn creates low demand for the luxury quality which leads to unpracticed craftspeople producing jewelry for the masses, despite it being Lebanon’s number one export.

Mouzannar dismisses the idea that the artisans of previous generations were more skilled than those of today, calling this “pure nostalgia,” and citing technological advancements which have made stone laying and jewelry cutting skills better than before.

Mouzannar has his own atelier, or workshop — something he says only 5 percent of Lebanese jewelers have, usually outsourcing their designs — which gives him the advantage of maintaining control over quality and the disadvantage of a heftier price tag.

The 50 craftsmen working with Mouzannar were selected for their basic skills in jewelry making, which they either picked up by trial and error or by observation, but which Mouzannar honed and molded to suit his vision of work.

The other main problem facing Lebanese jewelers, according to Mouzannar, is their lack of originality and their tendency to copy the major design houses or even each other in their designs. While their craftsmanship may be very good, such imitation will never lead to a brand or name strong enough to be internationally recognized — much as producers of Hermès knock-offs will never be known, or replace Hermès as a luxury brand.

Hope in the new generation of jewelers

Jewelers in Lebanon are usually family businesses, explains Mouzannar, and while the forefathers and founders may be hardworking, they usually have a traditional and conservative approach to jewelry making, preferring to imitate the big names instead of investing in innovative designs. “They choose the easy way and don’t want to invest in the creative process which takes time and requires a lot of mental work before production,” says Mouzannar.

Technical and vocational schools that would teach all aspects of jewelry making in a modern and creative way would help develop this industry in Lebanon, believes Mouzannar. This is far off, though, in that it is in nobody’s agenda and even the Syndicate of Expert Goldsmiths and Jewelers in Lebanon is full of bright ideas which do not get implemented, he says.

The hope for Lebanon to have its own luxury jewelry making industry lies in the young independent designers of today who are developing their own identity and are good at communicating it both in the local and global markets. Still, the ultimate recognition, Mouzannar believes, will have to come from the luxury continent, Europe — and namely its luxury capital, Paris — once enough high quality innovative Lebanese designers have made their name there, only thanks to their own efforts.